If the government of India has its way, the rules governing developmental activities along the ecologically sensitive 7,500-km-long Indian coastline will soon undergo a complete overhaul. But environmental experts feel that it won’t be a positive one as the draft Coastal Regulation Zone (CRZ) notification 2018, recently unveiled by the government, opens up the coastline for the industry, real estate and tourism rather than protecting the coast.

The draft CRZ notification 2018 was unveiled by Environment Minister Harsh Vardhan last week. When the final version is notified it would replace the CRZ Notification of 2011. The ministry has sought views, comments, and suggestions from all stakeholders including public within 60 days. The move comes even as the government of India has amended the CRZ notification 2011 several times since 2011 to relax the rules for the industry.

Experts feel that the draft CRZ notification 2018 is in line with Prime Minister Narendra Modi-led National Democratic Alliance (NDA) government’s flagship programmes such as Sagarmala and Housing for All. Under the Sagarmala programme, over 400 projects related to port modernisation, new port development, port connectivity enhancement and port-linked industrialisation over the 2015 -2035 period have been identified at an estimated cost of Rs. eight trillion.

The draft states that its main purpose is to “conserve and protect the unique environment of coastal stretches and marine areas” and to promote “sustainable development based on scientific principles taking into account the dangers of natural hazards, sea level rise due to global warming”.

Environmentalists are sceptical about this purpose. “The draft favours industry and will open up fragile coastal areas for the real estate and tourism sectors. The way it has been framed, it seems more like a guideline to facilitate projects rather than to protect the environment. It is clearly paving the way for destructive development,” said Shweta Wagh, who teaches at the Kamla Raheja Vidyanidhi Institute of Architecture and Environmental Studies, Mumbai, and is also a researcher with the Collective for Spatial Alternatives. 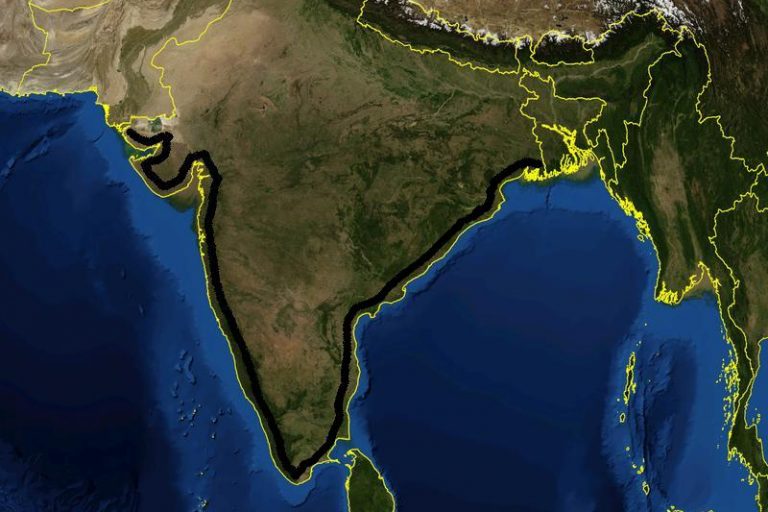 Subsequently, the NDA government came into power in May 2014 and in June 2014 it constituted a committee under the then secretary of the Union Ministry of Earth Sciences, Shailesh Nayak, to examine the CRZ notification 2011 in light of the issues specified by the various coastal states and union territories.

MoEFCC claims that it received “representations from various coastal states, besides other stakeholders, for a comprehensive review of the provisions of the CRZ Notification, 2011, particularly related to the management and conservation of marine and coastal eco-systems, development in coastal areas, eco-tourism, livelihood option and sustainable development of coastal communities.”

In January 2015, the Shailesh Nayak Committee submitted its report but the government did not make it public and instead, based on the report, it carried out several amendments in the CRZ 2011 notification. Though the Nayak panel report is yet to be made public, the government has now proposed the CRZ 2018 notification.

What does the draft CRZ notification 2018 recommend?

The draft CRZ 2018 notification proposes a series of changes in the 2011 version.

But it has exceptions. For instance, the draft said that construction of roads and roads on stilts, by way of reclamation in CRZ-I areas, shall be permitted only in exceptional cases for defence, strategic purposes and public utilities, subject to a detailed marine/terrestrial environment impact assessment, to be recommended by the Coastal Zone Management Authority and approved by the MoEFCC.

“ … and in case construction of such roads passes through mangrove areas or is likely to damage the mangroves, a minimum three times the mangrove area affected/ destroyed /cut during the construction process shall be taken up for compensatory plantation of mangroves,” it added.
As per the draft, CRZ-II will include “developed land areas up to or close to the shoreline, within the existing municipal limits or in other existing legally designated urban areas”.

The draft emphasises that the land areas that are relatively undisturbed (like rural areas) and those that do not fall under CRZ-II shall constitute CRZ–III. It also has a provision for a No Development Zone (NDZ) but the draft clearly states that the “NDZ shall not be applicable in such areas falling within notified Port limits”.

This has a potential to be a point of contention as environmentalists point to the Sagarmala programme — the massive port development programme of the Indian government.

The government also has a huge programme related to “coastal and port connectivity roads” of about 2,000 km under the Bharatmala Pariyojana (BMP) Phase-I. Under this programme, roads shall be built along the coast of India for boosting tourism and industrial development of the coastal region.

Another new feature in the 2018 draft is related to “construction of memorials/monuments and allied facilities by the concerned State Government in CRZ-IV (A) areas, in exceptional cases”. CRZ-IV A is the “water area and the seabed area between the Low Tide Line up to twelve (12) nautical miles on the seaward side”.

The insertion of this clause is notable in light of the recent plan of the government of Maharashtra to erect a 210-metre-high statue of Maratha warrior king Chhatrapati Shivaji in the Arabian Sea. This proposal has run into controversy due to its threat to the marine environment near the site and impact on livelihoods of the local fishing community.

According to an official statement from MoEFCC that stressed on the changes compared to the 2011 version, “the procedure for CRZ clearances has been simplified and delegations have been made at various levels for recommending CRZ clearances to the projects/activities.”

“Regulated limestone mining is proposed to be permitted, subject to strict environmental safeguards, in areas adequately above the height of HTL, based on recommendations of reputed national institutes in the mining field,” the MoEFCC statement reads.

The draft prohibits activities such as setting up of new industries and expansion of existing industries, manufacture or handling of oil, storage or disposal of hazardous substances, setting up of new fish processing units, land reclamation, disturbing the natural course of seawater, discharge of untreated waste and effluents from industries, cities or towns and other human settlements, dumping of city or town wastes including construction debris, industrial solid wastes, fly ash for the purpose of land filling, port and harbour projects in high eroding stretches of the coast, mining of sand and disposal of plastic into the coastal waters..

According to environmental experts, there are so many “ifs and buts” in the draft CRZ Notification 2018 that the prohibitions prescribed will not mean much.

“The new draft is bringing significant changes to the CRZ rules and once finalised they will impact the present land use in several coastal areas. The draft CRZ Notification 2018 focuses on the creation of infrastructure, and real estate rather than the protection of coastal ecology and livelihoods,” said Kanchi Kohli, who is a legal research director at the Centre for Policy Research (CPR)-Namati Environmental Justice Programme.

“The idea of the proposed regulations is to create huge investment opportunities without a foregrounding in environment protection. The proposed changes seem to align with government’s flagship schemes like Housing for All and Sagarmala,” Kohli added.

Explaining further, Shweta Wagh said that, for instance, the draft “elaborates in detail on the the procedures to be followed to obtain clearances for the erection of monuments and memorials in the sea (CRZ IV areas) and it even mentions that the government can waive off the mandated public hearing if they think that a project is sufficiently important.”

Why is there opposition to the proposed changes?

Experts point out that the proposed rules are against the poor and highly skewed in favour of industry.

Though the environment ministry claims it “examined” the Shailesh Nayak committee report and “consultations have been held with various stakeholders in this regard”, environmentalists said it is not the case. They also allege that the rules are being prepared behind the scenes without much public participation.

“The worst part is that the draft has been put together through a closed door process without involving coastal communities on whom the changes will come to bear,” Kohli emphasised.

Meanwhile, Wagh stated that amendments in the CRZ rules between 1991-2011 period were incorporated in the 2011 version and thereafter there have been more dilutions to clear the way for specific projects.

“The new draft has now incorporated all those changes since 2011, even when several of them have been challenged legally,” she added.

Wagh said she fears that with such extensive changes to coastal protection regulations, India’s coastline will be opened up for major infrastructural development projects and will never be the same again.

“The amendments have been proposed without any public consultation and only certain stakeholders have been consulted. They are clearly meant to favour private developers, the government, and the industry. They also align with proposed government schemes and will lead to the opening up of several ecologically sensitive areas for infrastructure and urban development,” she added.

Wagh also drew attention to an omission in the 2018 draft stating that it makes no mention about Koliwadas, which are the fishing settlement areas in Mumbai and had special protection in the 2011 notification, being designated as CRZ-III areas.

“The 2018 draft is completely silent about them. There is no mention. If the draft is to go by, customary uses and livelihoods along the coast will be severely threatened to make Mumbai an open playground for developers without much of safeguards for the fisher community,” she warned.

Why is protection of India’s coastal areas important?

India has a vast coastline and the population living in the coastal areas is often at risk because of climate change which has caused an increase in frequency and intensity of extreme weather events.

While replying to a query in Parliament, earlier this month, the Minister of State in MoEFCC Mahesh Sharma said that according to the Fifth Assessment Report of Intergovernmental Panel on Climate Change (published in 2014), the global mean sea level rose by 0.19 [0.17 to 0.21] metres in the period 1901 to 2010, and will continue to rise during the 21st Century.

“This may lead to adverse impacts such as submergence, coastal flooding, and coastal erosion. As per a study by the National Centre for Sustainable Coastal Management on shoreline changes between 1975 and 2011, a shift in coastline towards coastal habitation due to sea erosion has been noticed in the states of Andhra Pradesh, Karnataka, Kerala and Tamil Nadu.

According to this study, around 80 villages have been affected where sea erosion of above 20 metres has been observed,” Sharma explained.

Also, as per India’s Second National Communication submitted to the United Nations Framework Convention on Climate Change, the sea level is projected to rise by 3.5 to 34.6 inches between 1990 and 2100, which may result in saline coastal groundwater, endangering wetlands and inundating valuable land and coastal communities.

According to the Indian government, the most vulnerable stretches along the western Indian coast are the Gulf of Khambhat and the Gulf of Kutch in Gujarat, Mumbai, and parts of the Konkan coast and south Kerala.

Environmental law experts point out that the environment ministry borrows heavily from the Shailesh Nayak committee report but only the part that is related to relaxing rules for the industry.

“The dilution of CRZ is now a regular phenomenon. Ease of doing business seems to be the guiding light in the environment ministry. Thus, it is not surprising that CRZ guidelines, yet again, are being relaxed. But one thing is clear that after 27 years of a subordinate legislation like CRZ needs to mature into an Act. The 7,500-km coastline would otherwise be at a huge risk if this trend is allowed to continue,” said Sanjay Upadhyay, a senior environmental lawyer in the Supreme Court and managing partner of the Enviro Legal Defence Firm, an environmental law firm.

“It is also ironical that on one hand, in an ongoing case in the National Green Tribunal, the MoEFCC is filing responses of updating the coastal zone management plan based on certain distances from High Tide Line. At the same time, the ministry wants to shift the goalpost by amending the CRZ notification. This will completely undo the ongoing process. It is high time we have a national coastal zone management Act,” he added.