Twenty-seven-year old K Jagadeeshwaran walks down every few hours from their one room apartment in Ceylon Colony, Thoothukudi (earlier known as Tuticorin) in Tamil Nadu, to take a look at the poster displayed just a few paces away. Wearing a t-shirt and casual three-quarter pants, he looks more like an adolescent than an adult. Jagadeeshwaran suffers from Down syndrome. It is because of this, he is yet to comprehend that his father K Kandaiah — whose gory images are displayed on the poster— is dead.

“He keeps looking at the pictures of his father, waiting for him to come back. We don’t know how to tell him that his father will never come back again,” said Roop Kumar, Jagadeeshwaran’s cousin.

Kandaiah, like thousands of others, had gone to the Thoothukudi collector’s office on May 22, the 100th day of the people’s protest against the pollution caused by the copper smelter plant of Sterlite Copper, a subsidiary of Vedanta Resources. As he, along with the other protesters, barged into the office premises, the Tamil Nadu police gunned him down, without a warning.

Less than a kilometre away, the house of 22-year-old Ranjith Kumar, who was also shot dead, is in mourning. Kumar was a boxing enthusiast and a state medallist in the sport. He had recently attended an army selection programme in Bikaner, Rajasthan.

His father, C Baskar, 42, a labourer, told Mongabay-India, “He had just finished his engineering. I was hoping he’ll get a good job and take care of all of us. Ranjith wasn’t even too much into the protests, he had just gone to the collector’s office to see what’s happening. They shot him in the neck.” Kumar’s boxing coach L Stephan, who was sitting next to Baskar added, “Somebody found his phone and they called us. That’s how we got the news. They are not even letting us see his body now.”

Across Thoothukudi, multi-coloured shamianas (Indian ceremonial tents) have been erected outside many homes. In Tamil Nadu, this is usually a symbol of ongoing festivities, a place where visitors can sit and relax. This time around though, they are all symbols of mourning.

Of pollution and collusion

Ever since the Sterlite Copper smelter became operational in 1996, there have been protests against the company’s excesses and environmental violations. Located at the edge of Thoothukudi town on the Madurai bypass road, the company had a copper smelting capacity of 40,000 tonnes per annum in the 1990s. When it was shut down earlier this year, this capacity had increased ten-fold. During its 22-year-long tumultuous industrial history, the company was forced to shut down multiple times, all of them for environmental violations. It has always commenced operations though, with or without a license. The government and administration had apparently turned a blind-eye several times.

The latest anti-Sterlite agitation began in the village of Kumareddyapuram, a few kilometres from the company, against the proposed doubling of the copper smelting capacity. If the expansion had gone through, the company would have a copper smelting capacity of 900,000 tonnes per annum, making it one of the world’s largest copper smelters. This would be matched only by companies in Chile and China, the world’s largest copper producers. Also, unlike many other large copper smelters, it would have been located in a densely populated area — the town of Thoothukudi has a population of around 411,000 people. Copper smelters in India come under the red category for industries, which means they have a pollution index score of 60 and above and are prohibited from being located near ecologically fragile as well as densely populated areas. The Gulf of Mannar marine reserve is just 14 kms from the Sterlite plant and the town’s residents, much closer.

“It is this misconceived notion of development, that places the economy ahead of people’s lives and environment, that has led to the present situation,” said Fatima Babu, an environmental activist who has been campaigning against Sterlite Copper since its inception. She added, “Despite the factory being shut many times, they always found a way to go ahead with business as usual. The fact that they kept getting away with their crimes is what angered us the most, that is also why the latest protest that began in February was an all-or-nothing situation.” 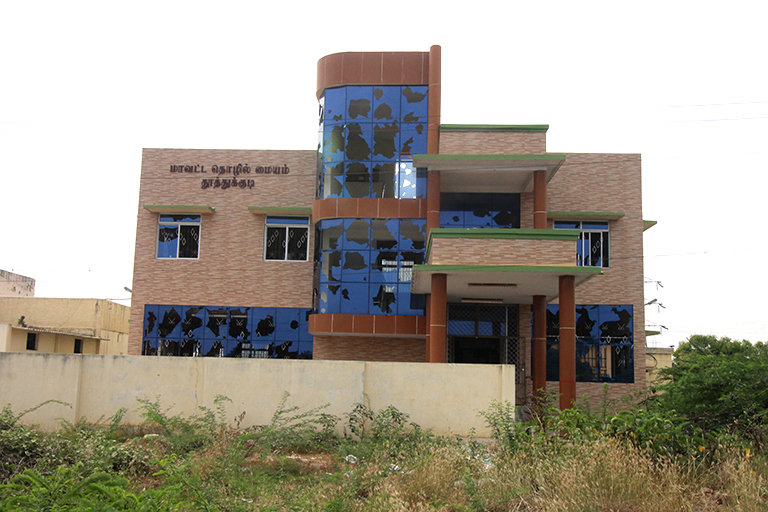 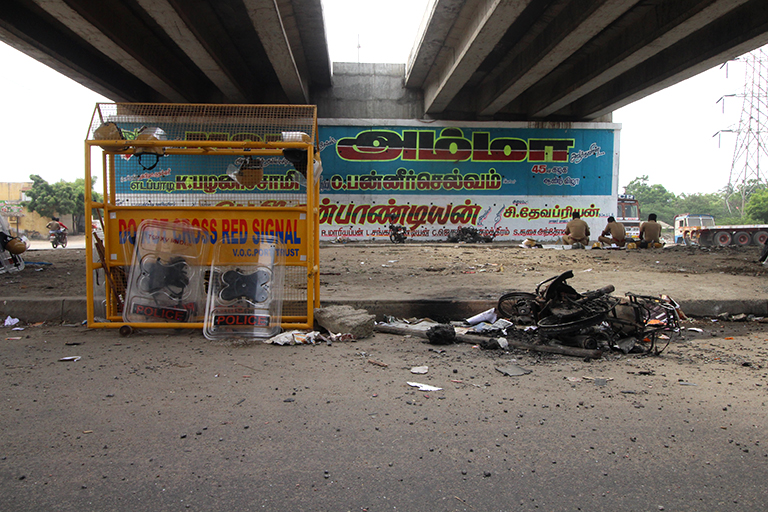 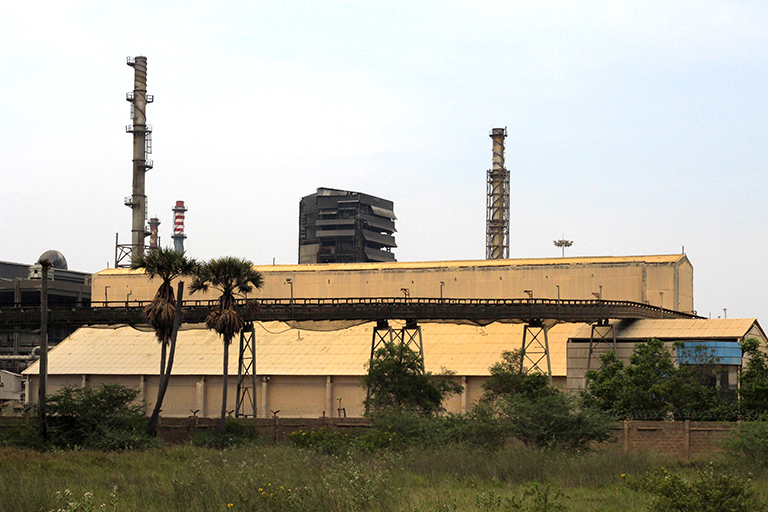 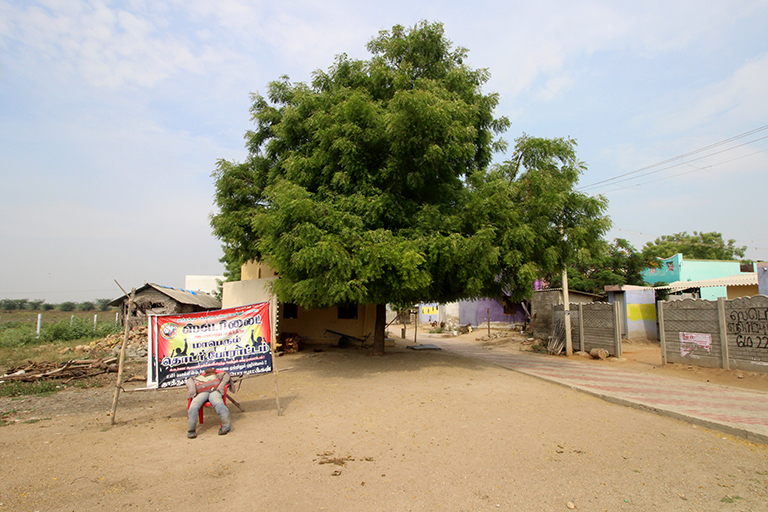 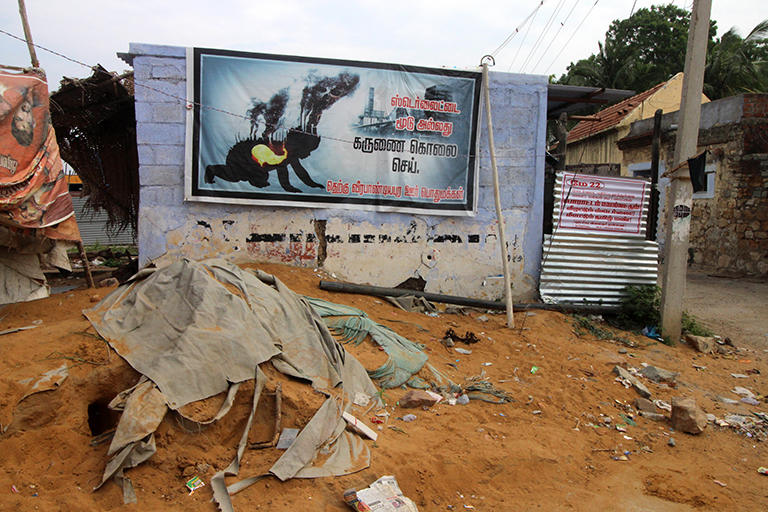 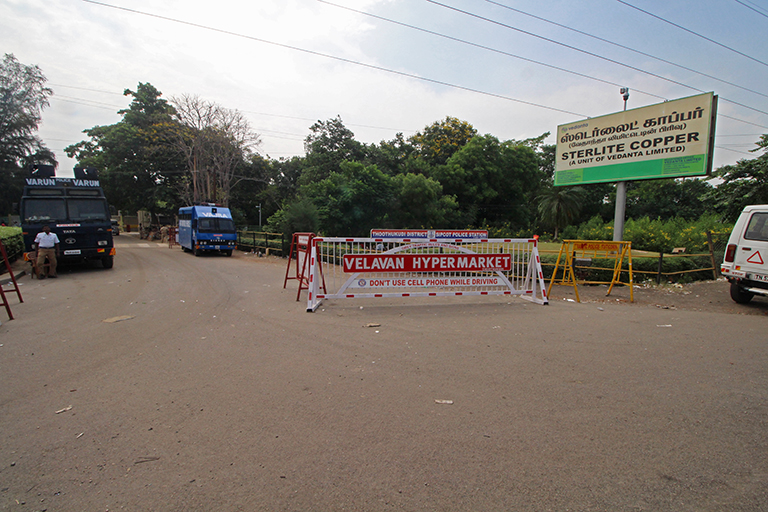 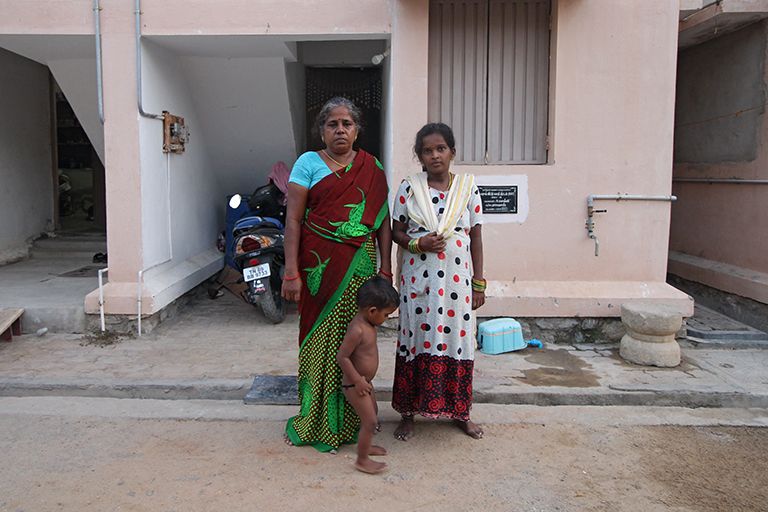 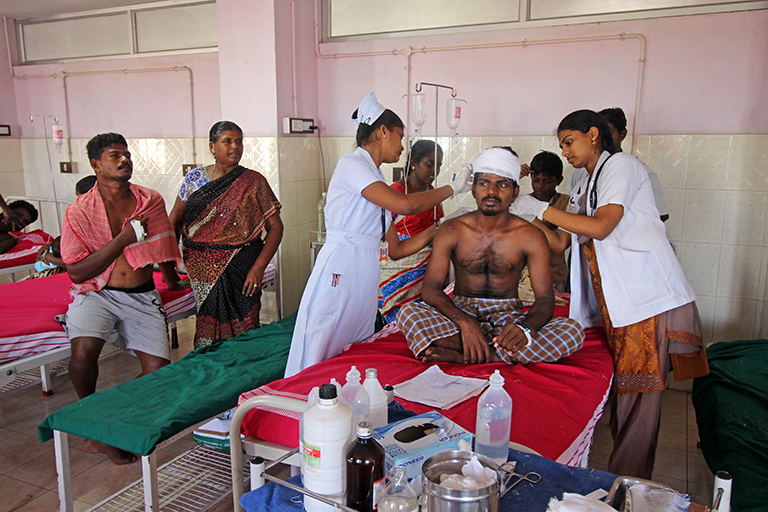 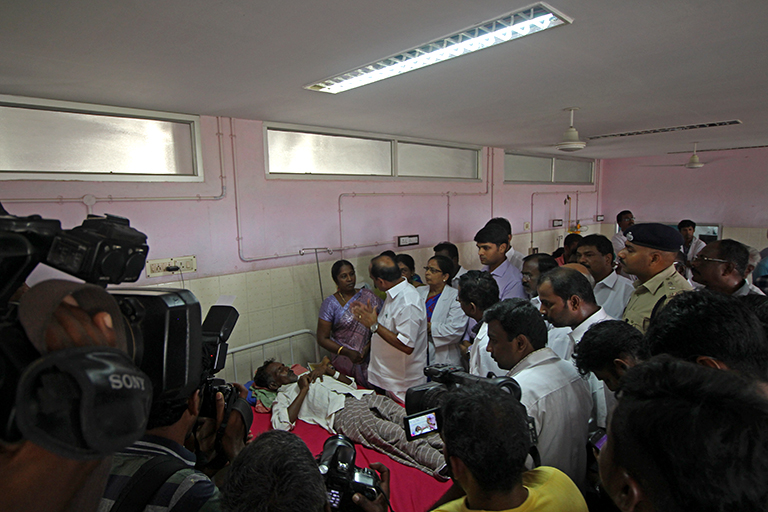 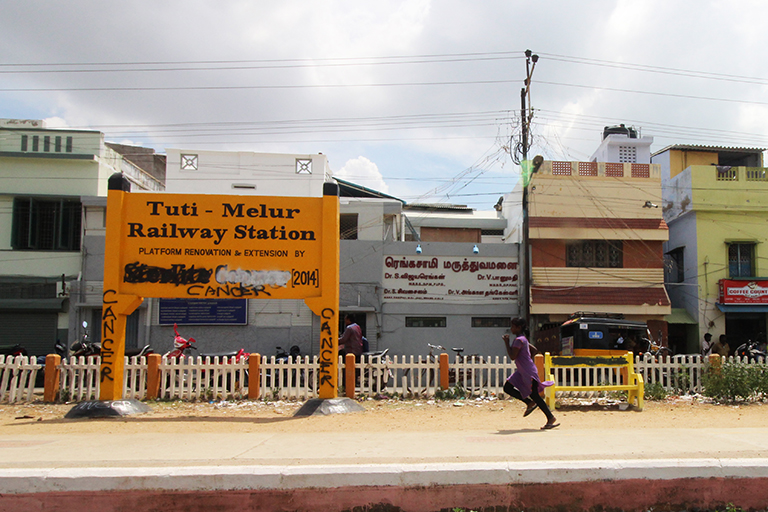 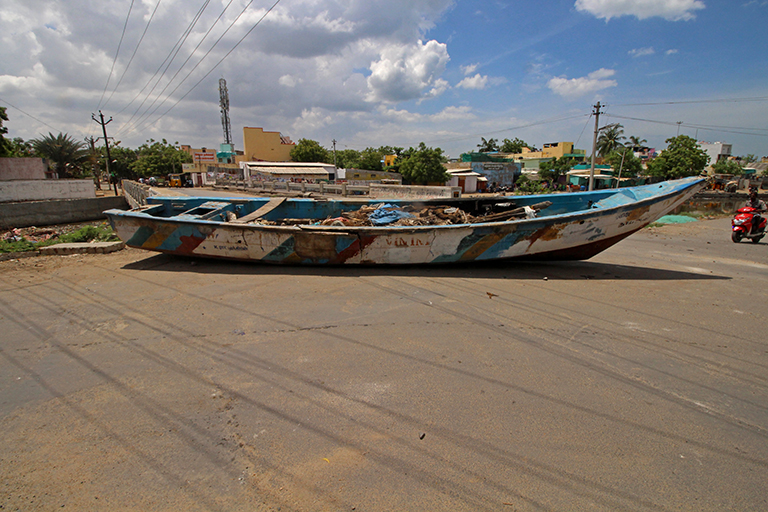 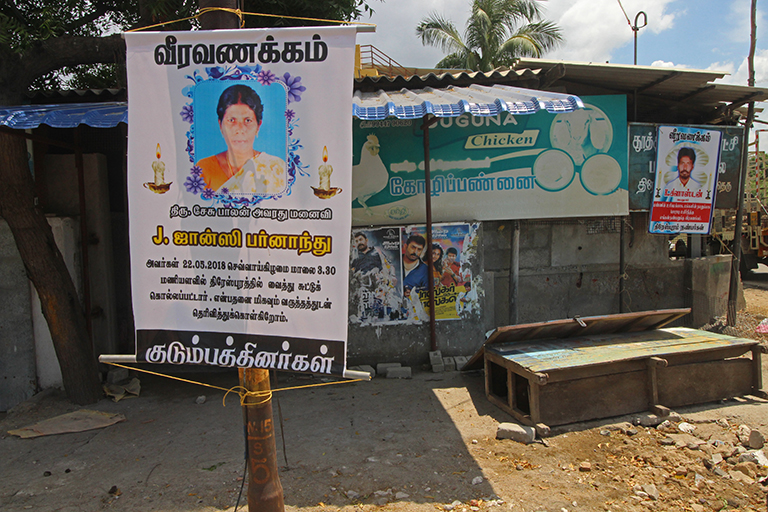 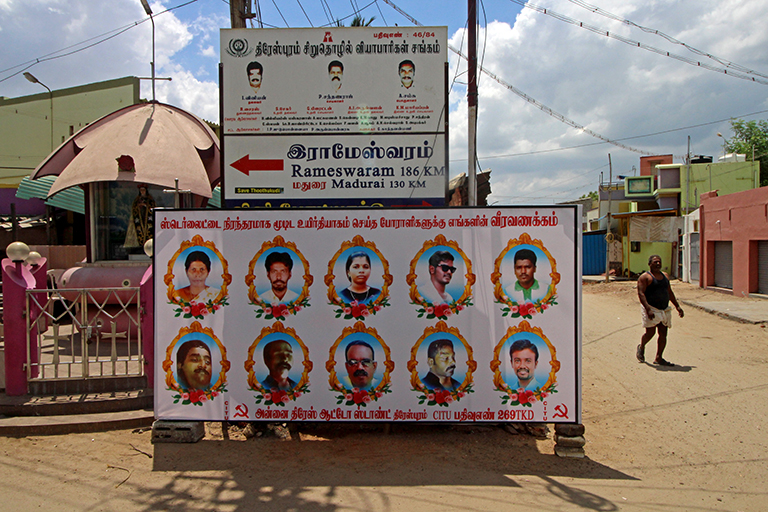 The protest spread from Kumareddyapuram to other affected communities in and around Thoothukudi and resulted in a mass gathering of people on March 24, when thousands poured onto the streets in a peaceful manner. They demanded that Sterlite Copper be shut down for good. From late March, the plant has remained closed, with the Tamil Nadu Pollution Control Board (TNPCB) refusing to renew the plant’s consent to operate license.

Protesters stuck to their guns since they had seen temporary closures of the company many times. It was a culmination of these continued protests that led to the march towards the collector’s office on May 22. The rest has now become gory history, with some even referring to the events of the day as the “Thoothukudi massacre”.

As silent as a graveyard

Driving through Kumareddyapuram, Therkuveerapandiapuram, Milavittan, Pandarampatti and Silverpuram, villages located closest to Sterlite Copper, one notices a deathly silence. Each village has three or four policemen posted in the village commons, a place where the village residents are usually found relaxing or chatting at all times of the day. “The police have put many of our boys in jail and those who managed to, have run away,” a resident of Therkuveerapandiapuram told Mongabay-India, on the condition of anonymity. He added, “Here in these villages, cases of stomach cancer, asthma, thyroid issues, problems during childbirth and other illnesses have become common. Before Sterlite, none of these ailments were experienced by anyone here. In fact, the water here has become so polluted we can’t even use it to wash our face.”

Across Thoothukudi and surrounding areas, police are posted at every corner and major intersection. Police vans and riot control vehicles are constantly moving around the town and anyone wearing a black shirt is stopped and questioned by the police. The black shirt is a symbol of protest.

In the fishing hamlet of Terespuram, only a stone’s throw away from the residences of the collector and superintendent of police, a fishing boat blocks the entrance to the area. Robert Villavarayar, a community leader told Mongabay-India, “Three hours after the shooting at the collector’s office on May 22, police came into our area and started beating up anyone they could lay their hands on. A middle-aged woman, J Jhansi, went up to the DSP and asked why they were doing this.Then she happened to drop something down and I am told that when she bent down to pick up her things, they fired point blank at her, killing her on the spot. This is murder, sir. What did that poor woman do to them? Are we all terrorists?” At Terespuram, police are not allowed inside now and there is calm. But every person on the road is observed by residents of the locality.

At the Government General Hospital, where there is a large posse of police as well, there are about 60 people, injured by police action or with bullet wounds, who are receiving treatment. It is estimated that at least 200 people were injured and the rest were shifted to hospitals in neighbouring Tirunelveli and Kovilpatti due to lack of infrastructure at the Thoothukudi hospital. S Raja, 18, who runs a vulcanising shop outside the collector’s office is lying in one of the beds, with a bullet having passed through his ankle. He said, “I had just gone to see what was happening inside when they started shooting. There was no warning or anything, I’m just happy the bullet went to my leg and not somewhere else.”

After the events of May 22, the state government, under immense pressure from various quarters, first cut off electricity to the Sterlite Copper plant and on May 29 issued a government order (G.O.), permanently closing and sealing the plant. The newly appointed collector (the top officials who were in charge on May 22 were transferred), Sandeep Nanduri, was pictured ceremoniously sealing the plant.

Jijo Mathew, Manager, Public Relations, Sterlite Copper said, “The closure of Sterlite Copper plant is an unfortunate development, especially since we have operated the plant for over 22 years in the most transparent and sustainable way, contributing to the Tuticorin and the state’s socio-economic development. We will study the order and decide on the future course of action.”

He had earlier said, “It is with great sorrow and regret that we witnessed May 22’s incidents around the protest at Tuticorin. The company has appealed to the government and authorities to ensure the safety of our employees, facilities and the surrounding community.”

The people of Thoothukudi are still apprehensive. A lawyer at the Thoothukudi court who did not want to be named, said, “It’s good that the plant is closed, but we’re still not sure that it is gone for good. Many of the gunshot victims’ families were not willing to take the bodies back till the plant was shut, so this might be an eyewash to encourage them to do so.”

“Besides, the plant has been shut many times before only to reopen. The company has said that they will challenge the G.O. regarding the closure in the Supreme Court as well. So this is far from over,” he added.

Meanwhile, across Thoothukudi, posters have sprung up with images of the “martyrs of May 22”, who gave up their lives in the fight to permanently close down the polluting Sterlite Copper company.

Nanduri emphasised to Mongabay-India that “the situation has returned to normal and people here are extremely happy that the company is shut down finally.”

“There are no law and order issues in the last three to four days and we’re trying to help the citizens of Thoothukudi get back to their work and lives in the best way we can,” he said.

When asked if the authorities are prepared to face the higher judiciary’s scrutiny of their government order, he said, “I don’t want to comment on hypothetical situations right now. We’re focusing all our efforts on bringing Thoothukudi back to normal.”