Climate change could threaten the habitat of the endangered Nilgiri tahr

The Western Ghats, a stretch of mountains running parallel to the western Indian coast, is a biodiversity hotspot, home to countless species that are unique to the region — known as endemics. One of these is the Nilgiri tahr (Nilgiritragus hylocrius), an endangered hoofed mammal that is related to wild goats.

While a warming climate is expected to affect the distribution of wildlife inhabiting the Western Ghats, the impacts on Nilgiri tahr have so far been unknown. Now, a new study using ecological niche models paints a precarious picture of the future of the species in response to climate change. Extreme global warming could make an alarming 60 percent of their current suitable habitats unsuitable. As a result, the researchers call for greater monitoring of the habitats and populations that have been identified as most-at-risk.

Among 12 other ungulate (hoofed mammal) species found in India, the Nilgiri tahr, is the only mountain dweller found in southern India. The shy, elusive animal − which is also the state animal of Tamil Nadu − lives in the high-altitude (1100 to 2695 metres) mountainous grasslands and rocky cliffs in the southern portion of the Western Ghats.

Researchers believe that prior to 1950, tahr were spread over a larger area in the Western Ghats and that since then their distribution has shrunk considerably. Currently, about 3000 individuals remain in isolated groups, restricted to the states of Kerala and Tamil Nadu, covering less than 10 percent of their former range.

During 2010 to 2011, the researchers of this study identified ten existing tahr habitats using previous literature and consulting scientists and forest officials. These habitats were then surveyed for the presence of tahr to model their distribution under current climatic conditions.

Next, using ecological niche models, they predicted how the distribution of suitable tahr habitat would change during the 2030s (2021–2050), 2050s (2040–2069) and 2080s (2070–2099), in two future global climate warming scenarios. The first scenario, which is more optimistic, assumes emissions will peak in the 2040s after which they will fall (surface temperature rise of 1.5°C). In contrast, the second scenario considers the case where emissions will continue to rise throughout the century (surface temperature rise of 2°C).

“A niche is nothing but a combination of environmental conditions which allows a species to survive,” explained Kannambally M. Jayahari, senior author of the study, who was Programme Officer at Winrock International India during the study and is now a consultant at the World Resources Institute.

Currently the habitat suitable for the tahr spreads to 21,448 square km. In all the future climate change scenarios much of the habitat would become unsuitable for tahr and fall below 8,500 square km. For the extreme scenario, the models predicted a maximum range loss of 61.2 percent, 61.4 percent and 63 percent of current habitats for 2030, 2050 and 2080 respectively. 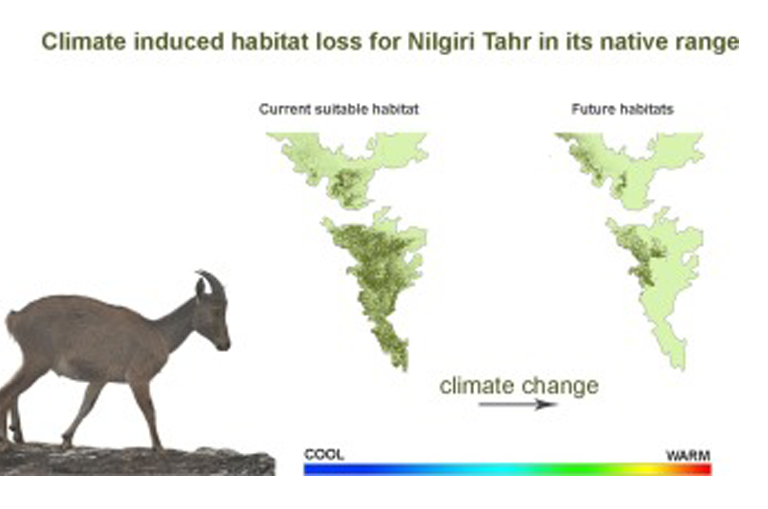 Image sourced from the study with permission from the authors.

Specifically, Kalakkad Mundanthurai Tiger Reserve, Peppara, Neyyar, Shendurney and Srivilliputhur wildlife sanctuaries are predicted to become unsuitable for tahr in the future while protected areas such as Peechi-Vazhani and Chinnar wildlife sanctuary as well as Parambikulam Tiger Reserve and Silent Valley National Park are vulnerable under the extreme climate change scenario.

Jayahari, the senior author, stressed that the study is merely flagging the level of climate risk and that in order to suggest any mitigation strategies it is required to know how tahr habitats will become unsuitable, which at present is unknown. “It is hard to predict how the niche unsuitability is going to be translated to on-the-ground scenarios,” said Jayahari. “It may work as increased susceptibility of the species to wildlife diseases, the grasslands may be taken over by other vegetation types, the food species of these species may get replaced by other species etc.”

Jayahari and Sandeep Sen, a PhD Research Scholar at the Ashoka Trust for Research in Ecology and the Environment (ATREE), Bengaluru and co-author of the study emphasise that these models have limitations and that more detailed long-term ecological studies need to be conducted to understand how climate change can affect tahr populations and to develop management strategies.

Eminent wildlife biologist A.J.T. Johnsingh of Mysuru’s Nature Conservation Foundation, who also is an honorary scientific advisor to WWF-India, said that “although tahr have the capability to live in the lower altitudes of Western Ghats,” the increased heat waves caused by climate change “can have a disastrous effect on their habitats, particularly resulting in the drying up of the springs in summer, which could be detrimental to the overall tahr population.”

Sen suggests surveying outside of protected area networks to map small populations, which are more vulnerable to extinction than larger ones. He added that small populations within the same landscape require habitat connectivity to ensure their survival.

“This will not only ensure the probability of the animals’ migration to suitable habitat in the future but can also help to curb the deleterious effects on these populations due to inbreeding,” explained Sen.

He recommends greater monitoring of climate vulnerable habitats and populations flagged by the study to improve connectivity and habitat quality in those areas.

Overall, more studies investigating the impact of climate change on tahr at present will help in predictions of future scenarios.