In a move towards encouraging women employment in the region, the government of Chhattisgarh and the state forest department has inducted seven female forest guides at the Achanakmar Tiger Reserve last year. The women have opened up the jungle and its wonders to several tourists and in turn have gained self confidence and financial standing. by Raghuraj J. Singh Garcha on 25 September 2018

“We know this jungle like the back of our hands. We have grown up with wild animals around us and already know the basic behavioural limitations,” said 19-year-old Parmeshwari, appointed as one of the first women forest guides at a tiger reserve in the central-eastern state of Chhattisgarh. Parmeshwari helps amateur birders spot birds like the red vented bulbul, turtle dove, hornbills and other raptors.

In a move towards encouraging women employment in the region, the government of Chhattisgarh and the state forest department has inducted seven female forest guides at the Achanakmar Tiger Reserve. The women, who started their duties as forest guides in January 2017, are from the village of Bindawal which falls under the territory of the tiger reserve where employment opportunities for women are restricted.

Achanakmar Tiger Reserve, situated 190 kms away from Raipur, the state capital of Chhattisgarh, is spread over 914 sq kms. The region, mainly on the eastern highlands of the Maikal range blends with Kanha Tiger Reserve of Madhya Pradesh through the Achanakmar-Kanha corridor completing the Greater Maikal landscape. According to the last census in 2014-2015, 26 tigers were found to inhabit the Reserve. Leopards, wild dogs, hyena and sambar deer also call Achanakamar Tiger Reserve their home. The reserve also has the presence of six hundred documented medicinal plants due to which a large number of researchers flock there.

The idea of hiring female forest guides was pitched by the forest rangers during a village meeting. Though the initiative was initially received with some apprehension, the women of the village were soon on board for the new employment opportunity. Predominantly farmers, the women were keen on new employment avenues as their agricultural fields were under constant threat from wild animals cohabiting the region.

Bindawal village falls under the territory of the tiger reserve where employment opportunities for women are restricted. Photo by Devjyoti Banerjee.

Geeta Devi, the eldest among the guides who are mostly in their late teens, joined the initiative to improve the financial condition of her family. “We cannot rely on solely on agriculture to make our ends meet. A second source of income is helping us improve our financial stability,” said Geeta.

Durga, another guide, added, “My father is very happy that I help him shoulder the responsibility of running the family.”

A special team from Kanha Tiger Reserve was brought in to train the newly appointed guides. During the month-long training, they were educated about various aspects of the jungle including English names of the animals as well as the flora and fauna inhabiting the tiger reserve. Additionally, they were trained in basic etiquette and communication skills for interaction with visitors.

Though the female guides were looked upon with apprehension by their male counter parts, their dedication and hard work helped them adjust into the system. Geeta said that a female guide faces similar challenges to any other woman trying to earn her livelihood in the predominantly male environment. But with each other’s support, the sisterhood eventually broke the glass ceiling. “We work as a team, looking after and protecting the interests of each other. We are forced to travel together for our safety,” she said.

Awkward and shy at first, the women are now seen interacting with visitors with great ease, a testament to the personality change that has come about following the training and employment.

“We initially used to run at the sight of men, even forest rangers. Today, we face our colleagues with confidence that we’ve developed because of the exposure we get from our work”, said Parmeshwari. The 19-year old believes that being  forest guides comes organically to the women as they have been born and bred in the same forest.

Interacting with visitors has opened up a whole new world for the women who have had limited interaction with people outside their community and region. “We have learnt a lot of new things from the tourists. Their experiences and knowledge of the world have played a major role in polishing our skills and enhancing our knowledge of the lives outside the forest,” said Parmeshwari.

In return, the women aim to open the minds of the tourists to the wonders of the forest. “A large number of tourists come to the jungle only to see the tiger. They completely overlook the beauty and calm surrounding them in this forest,” lamented Durga, youngest amongst the lot. The guides continue to express keen interest in garnering new knowledge.

Anupam Singh Sisodia, a naturalist who has spent a great amount of time documenting butterflies at the Achanakmar Tiger Reserve, said that the group has always shown eagerness to learn the different types of butterflies in their surroundings.

The biggest takeaway from the initiative is the immense growth in the self confidence and personality of the women who are now role models for more women from the region who have expressed their desire to join the ranks of the female forest guides. And they have willing mentors in the current crop of women forest guides. 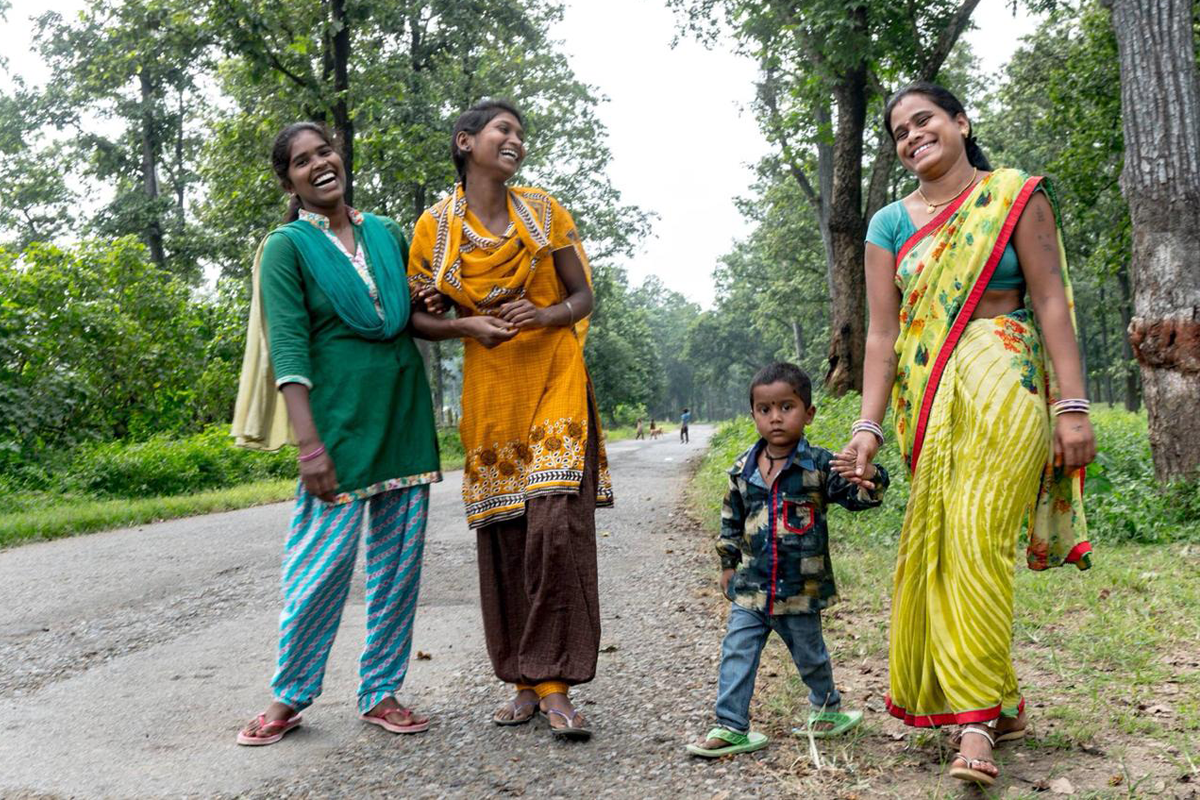 As their work continues and confidence increases, the women look forward to other women from the village joining the force too. Photo by Devjyoti Banerjee.

“We will personally make sure that every woman wanting to follow our footsteps is trained to perfection. Our on field experiences and knowledge will greatly help the aspiring guides in preparation for the days to come,” exclaimed a proud Durga all set to turn into a mentor for the aspirants.