Two new genera of lizards have been discovered in the Western Ghats. by Sandhya Sekar, Visuals by Saunak Pal and S. P. Vijayakumar on 26 October 2018

The Western Ghats have revealed two new genera of dragon lizards from the family Agamidae — Monilesauras and Microauris.

Over five years, a motley (and many times wet) bunch of field biologists from the Centre for Ecological Sciences, Indian Institute of Science, trudged through the wet massifs and lowlands of the Western Ghats, one of the most biodiverse areas in the world.

Even after numerous forays into hitherto unexplored areas, funded by the Critical Ecosystem Partnership Fund (CEPF), lead researcher of the lizard team Saunak Pal has this to say: “We need to make more trips into the Ghats. This is just the beginning.”

The CEPF project had an ambitious objective: mapping the diversity and distribution of frogs, snakes and lizards in the Western Ghats. With the project drawing to a close, a series of publications documenting the hyperdiverse biodiversity is underway.

All the species described in this article were initially thought to belong to one genus: Calotes, the genus that contains the common garden lizard Calotes versicolor. You may have spotted these in your garden: scaly creatures of changeable colour sporting spines down their back and a very long tail, that love to eat insects of all kinds.

There are 23 species in the genus Calotes, distributed in south and Southeast Asia. The Western Ghats has four, of which two (C. calotes and C. versicolor) are widespread. The other two (C. grandisquamis and C. nemoricola) are endemic – found only in the Ghats and nowhere else in the world.

This gorgeous green agamid can grow up to 136 mm from nose to vent (excluding the tail), is active during the day and lives up in the trees, sometimes choosing a lower branch for sleeping at night. 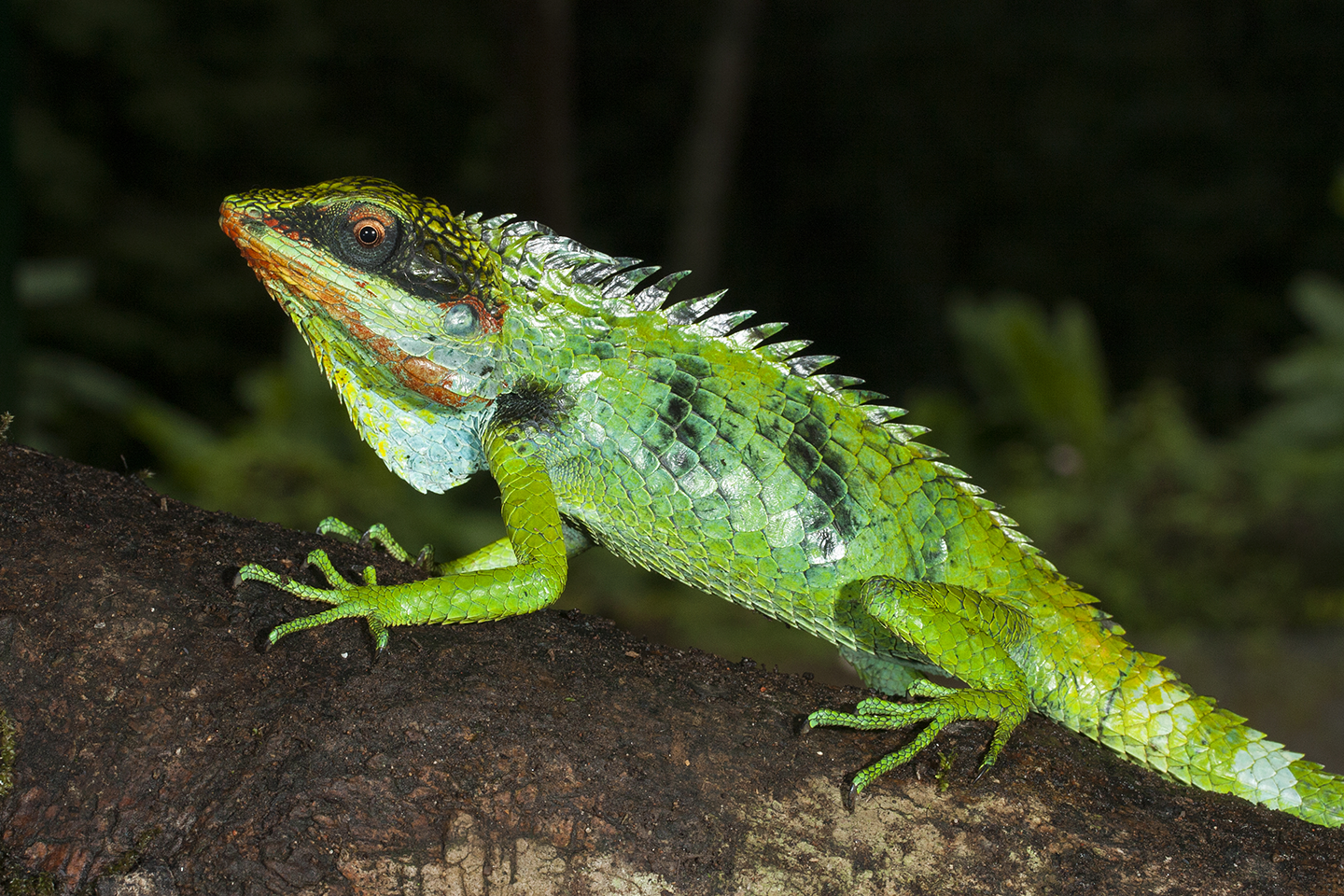 Calotes grandisquamis is endemic to the Western Ghats. It is one of the four species of lizards found in the Ghats belonging to the genus Calotes. Photo by Saunak Pal.

Saunak Pal said that the researchers always knew that the genus Calotes was taxonomically complex and would be substantially rearranged. On analysis of the Calotes-like specimens collected from the Ghats, the researchers could identify a group that had a distinct neck fold, much like a necklace. Genetic analyses revealed that this group was very different from the other members of the Calotes genus; so different that that it warranted an entirely new genus, Monilesaurus (Monile is Latin for necklace and Sauros is Greek for lizard).

From the montane forests of Kudremukh and Coorg, the researchers collected a medium sized agamid, about 70 mm long from snout to vent and sporting the characteristic necklace that made it a Monilesaurus. The species is restricted to montane shola forests, prompting the species name montanus (a derivative of montane, the forest type that the species calls home).

The back and head of the lizard was “yellowish-green with irregular, alternating light and dark brown patches on the back”, wrote the authors in the paper.

When in the Meghamalai forests of the southern Western Ghats, S. P. Vijayakumar, one of the authors of the paper, collected an agamid with the telltale necklace and additionally, dramatic spines at the back of its head.

“We knew at once that we had something new, the spines were very distinct,” said Pal. The team called this new species Monilesaurus acanthocephalus. The species name literally means ‘spiny head’ – acanthus is Greek for spine and cephalus means head.

The lizard is reddish with a light brown head and irregular alternating red and black blotches in the middle of its back. As far as current knowledge goes, the species is found only in the montane forests in the Meghamalai area and nowhere else in the world.

“For over 150 years since their description, Roux’s forest lizard and Elliot’s forest lizard were considered to be part of the widespread agamid genus Calotes. However, we found that these two lizards are actually part of a distinct group of lizards found only in the Western Ghats, which we name Monilesaurus,” said Pal in a press release.

A ghost among Indian lizards

All the lizards are active during the day and oftentimes the researchers came across a sleeping specimen when out at night looking for frogs and other creatures of the dark.

It was on one such nightly expedition that Varun Torsekar, then a PhD student at the Centre for Ecological Sciences, spotted a green lizard in the canopy, close to where the group was camping for the night. That green lizard turned out to be an entirely new genus, Microauris, so named because of its very small ear. The English name suggested by the authors is “small-eared dragon”.

This species is recorded only from the Agasthyamalai hills and has only been sighted a handful of times.

“Microauris aurantolabium is like a ghost among Indian lizards with only a few individuals recorded since its initial discovery in 1997. It was initially wrongly identified as Calotes andamanensis, a species of agamid lizard found in the Andaman Islands. Later in 2008, it was described as a new species based on detailed study of the museum specimen. We found this lizard after 12 years from high elevation forests of southern Kerala. Our molecular work shows that this species belongs to a distinct genus which we named as ‘Microauris’ due to the presence of a very small tympanum (ear),” said V. Deepak, the senior author, in a press release.

“The fact that it was only found again 12 years after its discovery and that too from a fairly well explored habitat suggests that this might be a rare lizard or it may occur high in the canopy of rain forests and thus escape detection,” wrote the authors in the paper.

There is another mystery to this enigmatic species. No one has ever seen a male.

Agasthyamalai hills, the habitat of the small-eared dragon. Photo by S. P. Vijayakumar.

Banner image: Monilesaurus acanthocephalus, one of the two new species discovered in the Western Ghats. Photo by Saunak Pal.