Gharials of Gandak: A population back from the brink faces development pressures

Lalsa Yadav gushes with a big smile on his face every time he spots a gharial in the river Gandak, that flows through West Champaran district of Bihar, bordering Nepal.

He tries to take his rickety boat close to the adult gharials (Gavialis gangeticus) enjoying a sun-bath in a chilly wintery afternoon, but they disappear into the deep water. He oars his boat further with the hope of seeing more of the large-sized reptiles in the river.

“Contrary to popular belief, they are very shy by nature and escape inside water even on slight disturbance. The river has quite a number of gharials nowadays which has made it easy to spot them. We are lucky to have them,” he says with a sense of pride. Gharials are members of the crocodile family, historically found in various parts of the Indian sub-continent.

The 50-year-old fisherman with a strong body and bulging muscles has every reason to feel proud. After all, he has worked tirelessly with conservation experts and administration to protect and bring back the population of gharials from the brink of extinction, in the river Gandak, a transnational river between India and Nepal and a tributary of river Ganga.

“We [the fishing community] have played a big role along with the authorities to save the reptiles that were in the danger of being hunted down or eggs getting washed away due to sand bank erosion,” he said.

“The efforts have paid off as gharials can now be easily spotted in the river because of the increase in their population,” he continued, pointing to two sub-adults at the far-end of the river.

Indeed, the population of gharials has witnessed an upward spiral in the Gandak that now houses the second largest population in the country, after the river Chambal (National Chambal Sanctuary) stretch that covers Madhya Pradesh, Rajasthan and Uttar Pradesh, claim those involved in its conservation.

Based on three surveys done by Wildlife Trust of India (WTI) between 2017 and 2018, around 211 gharials of different age-groups are present in the river as compared to merely 15 recorded in 2010.

The WTI conducted three continuous surveys in the entire stretch of the Gandak river in 2017-18. In the survey conducted from February 4-11 2017, 119 gharials were sighted in the entire stretch of the river. In 2018, two consecutive surveys (February 9-17 and 21-27) documented 148 and 166 gharials respectively in the same stretch. Around 40 hatchlings have been sighted in 2018 after the survey so experts expect the number to increase this year.

The findings have brought cheer to conservationists as the gharial is a critically endangered species. Endemic to the Indian subcontinent, the gharial is the most aquatic of all extant crocodilians and resides in flowing rivers with deep pools, high sand banks and good fish stocks.

Its distribution range has shrunk significantly and currently it occupies only about two percent of the former range. Old references indicate that the gharial was widespread across the Indian subcontinent: it was common in the Indus river in Pakistan, Gandak river in Nepal (locally known as Narayani), Jumuna river in Uttar Pradesh and Kosi river in Bihar. It was also found in Burma (now Myanmar), Bhutan and Bangladesh.  In India, the gharials are now found mainly in Chambal, Girwa, Ghagra and Gandak river basins.

The population has registered a 98 percent decline between 1946 and 2006; the adult population nosedived, with a 58 percent reduction across its range in just nine years, starting from 1997. The reason for the decline has been attributed to over-hunting for skins and trophies, egg collection for consumption, killing for indigenous medicine and excessive and irreversible loss of the species habitat.

In such a scenario, presence of the second largest population of the critically endangered gharials in the Gandak river becomes important for conservation of the species. 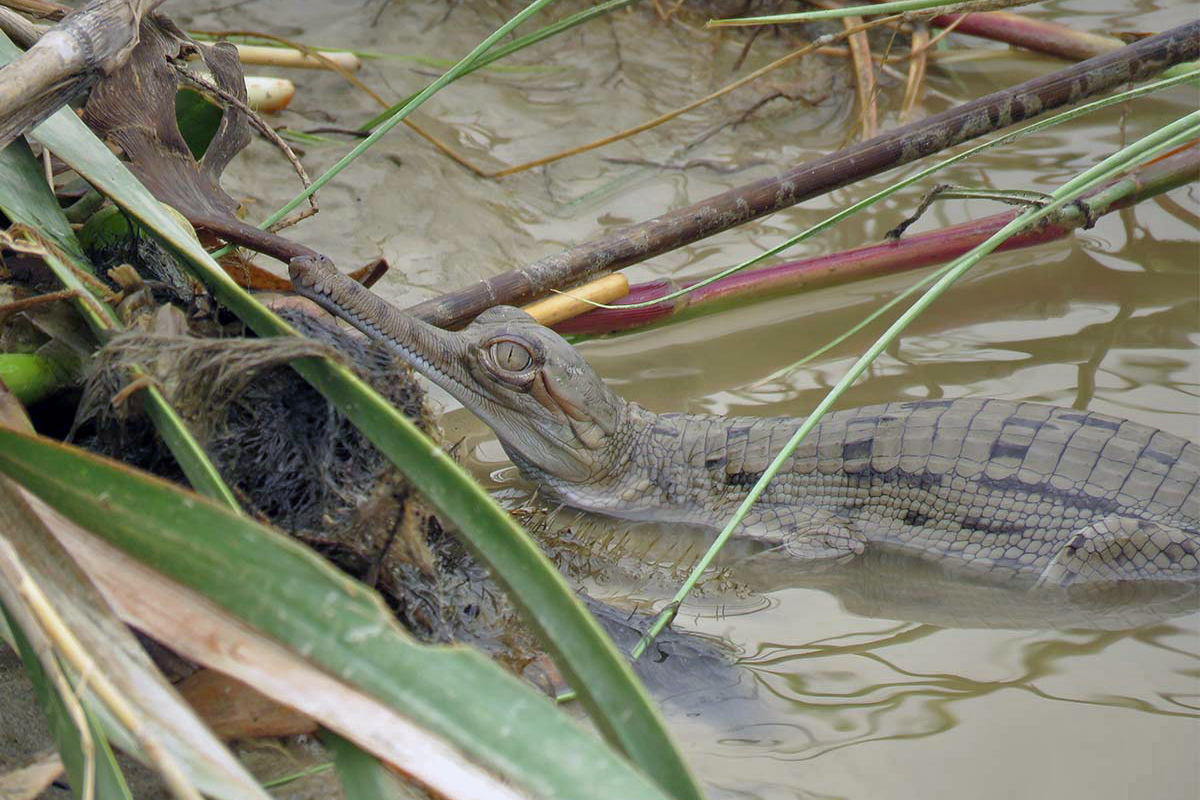 The population of gharials, a critically endangered species, has steadily increased along the Gandak river. Photo by Subrat Kumar Behera.

“Despite available knowledge about gharial population in the Gandak, little effort was made to document and implement conservation measures until the survey supported by WTI and other conservation organisations documented presence of about 15 gharials in the Indian stretch of the river in 2010 and proposed conservation measures including strengthening of the remnant population,” said Samir Kumar Sinha, the head of species recovery division, WTI.

The work for the conservation started in 2014 when WTI and Bihar Forest Department jointly started the gharial reinforcement project in the river Gandak. Around 30 captive-born and reared gharials from the Sanjay Gandhi Jaivik Udyan (Patna Zoo) were released in the Gandak, followed by post-release monitoring.

“The release stock comprising of sub-adult individuals (3 males and 27 females) was examined for health condition and acclimatised by providing live fish as food for six weeks to allow for inculcation of hunting skills in them. Prior to transportation, each individual was sexed and marked,” he said. Gharials are marked by distinctive marks in the bony part of their tail. “Two individuals were fitted with satellite transmitters, while VHF [Very High Frequency] tags were implanted on four individuals for remote monitoring.” A VHF tag is a transmitter that sends out signals that can be picked up by a corresponding receiver.

Six months after their release, monitoring results found 60 percent (18 out of 30) of the released gharials surviving in the wild. The team also spotted several gharials released by Nepal almost 75-100 kilometres from their release site. “We also found the captive-born and released gharial had started sharing the habitat with wild individuals. This showed the presence of habitat selection instinct in the captive-born and reared gharials,” said Subrat Kumar Behera, assistant manager, WTI.

More success came in 2016 when the WTI located six nests with 148 eggs in Chiurahia Reta near Ratwal Brige in Gandak. The nests were protected involving locals until successful hatching and the success was approximately 24 percent.

The discovery made the Gandak river the fourth extant breeding site of gharial in the country, in addition to Chambal, Girwa and Ramganga rivers.

In 2018, the team identified the congregation sites in the month of February and two nests with 57 eggs were found near the Ratwal Bridge. Due to bank erosion, the nests were shifted scientifically to a safe distance from the water line in the same site. About 35 percent eggs hatched successfully.

The land-use features have also made Gandak a perfect habitat for the reptiles. The sand banks and bars that are important for basking and nesting activities constitute about 4.49 percent of the area.

Additionally, gharials also use the sand banks or bars with temporary agriculture activity which is about 10.92 percent of the area. The average water depth recorded in the lean season is around 2.64 metres which is sufficient for adults and sub-adult gharials that prefer deeper areas as compared to juveniles and yearlings.

Gandak also has less fishing pressure as fishing activities are not recorded in more than 55 percent of the stretch. Encounter rate of fishing boat and individuals involved in fishing has been 0.3 and 1 per km respectively.

Moreover, the wetlands associated with the river covering 7,929 hectares area are fish breeding grounds that keep the river replenished with fish resources. The lesser human settlements within 2 km of the banks are temporary in nature and farmers undertake farming only in non-rainy seasons.

H.K. Roy, the field director of Valmiki Tiger Reserve which covers a portion of Gandak said that the state government is serious about increasing the population of gharials and their habitats.

“The Bihar government has sanctioned a budget of over Rs. 27 lakhs (Rs. 270,000) for building a hatchling centre in Motihari and for creating awareness among people, particularly those living in close vicinity of the river, regarding the reptiles,” he said. “We are distributing pamphlets and other material to the locals to inform about gharials and crocodiles as often people get confused and consider the former as dangerous while infact gharials mainly survive on fish and have rarely attacked humans. We are also imparting training to our staff members to spot the gharials using scientific techniques.”

He said that the river is relatively better protected up to 40 km stretch after entering Bihar due to the location of Valmiki Tiger Reserve on the left bank and Sohagi Barwa Wildlife Sanctuary in Uttar Pradesh on the right bank for approximately eight kilometres. 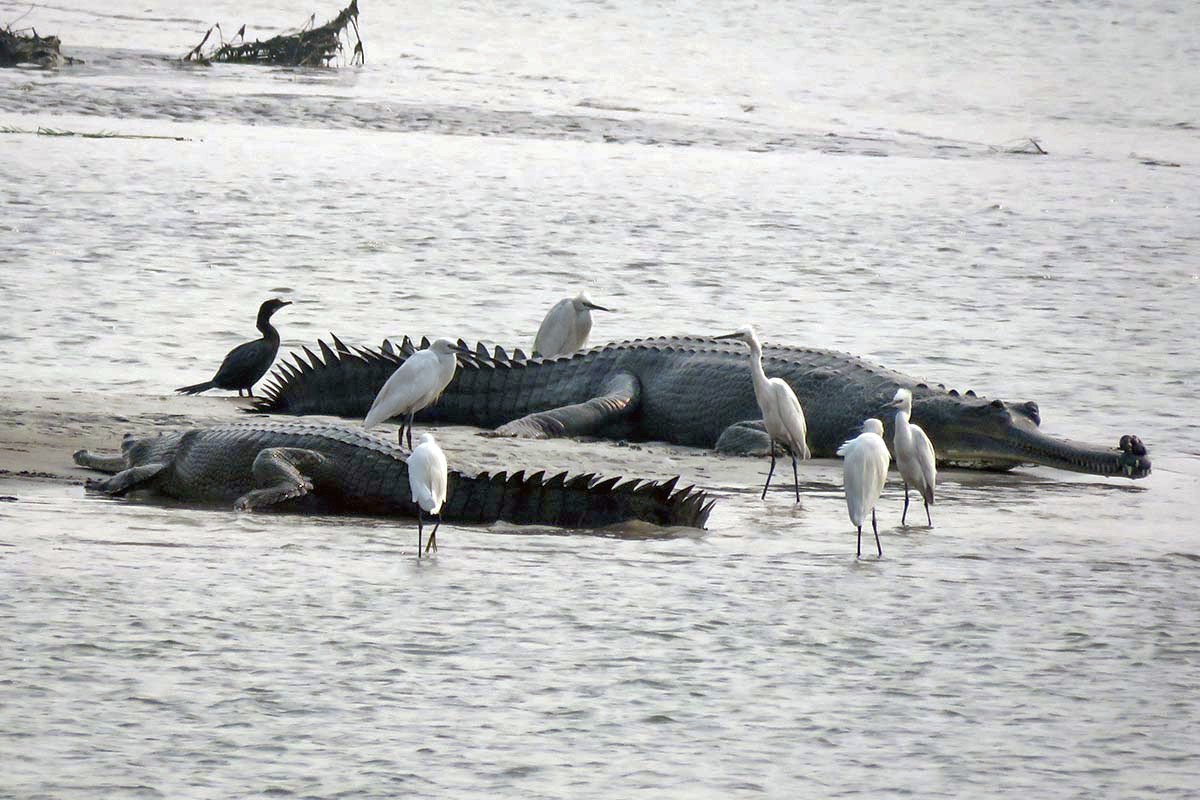 Favourable habitat conditions and a comparatively lesser disturbed river have aided in the conservation of gharials along Gandak river. Photo by Subrat Kumar Behra

The need for conservation policies

But everything is not hunky dory for the gharials in Gandak. Among the prominent challenges for their survival is the Gandak Barrage, as the release of excess water often creates problems for gharials.

In March 2017, increased water level in the river due to opening of gates of the Gandak Barrage submerged the sand banks that destroyed the gharial nesting grounds. In rare cases, small gharials have also known to get caught in fishing nets, resulting in their death.

“There has to be a change in the policy level from the top and authorities must discuss with wildlife experts before releasing water from the barrage as often the nesting sites get destroyed. The nests should be shifted to a higher ground before the water is released. The community level participation is also vital as often nests get destroyed by animals,” said B.C. Choudhury, Crocodile Specialist group member of International Union for Conservation of Nature (IUCN) Species Survival Commission (SSC).

“We have also submitted a proposal to the Bihar government to declare the stretch of the river Gandak as conservation reserve because it also houses endangered species of turtles and dolphins apart from gharials. The government can also develop eco-tourism by facilitating the sightings of gharials and dolphins. It will not only give employment to locals but will also inspire them to protect the gharials,” he added.

He concluded that there are several stretches where human activities prominently affect habitats of aquatic life. This needs to be managed and mitigated to ensure secured habitat to life forms of the river ecosystem.