Explaining that the Himalayan wolf is a little-understood wolf lineage found in the Himalayas and the Tibetan Plateau of Asia, the study noted that the species diverged from the Holarctic grey wolf 691,000 to 740,000 years ago. The Holarctic region includes all the non-tropical parts of Europe, Asia, Africa (north of the Sahara), and North America (till the Mexican desert region). According to the International Union for Conservation of Nature (IUCN), the global population of grey wolf (Canis lupus) is estimated to be 200,000-250,000 individuals.

“The Himalayan wolf presents an overlooked wolf lineage that is phylogenetically [evolutionarily] distinct from grey wolves. Current evidence indicates that this wolf has diverged as an own lineage before the radiation of modern grey wolves. Hence the Himalayan wolf presents an evolutionary significant wolf population that merits appropriate taxonomic recognition,” Geraldine Werhahn, lead author of the study, told Mongabay-India.

Taxonomy is a system of classifying species. Relationships between species can be represented as a family tree, known as a phylogeny.

Werhahn explained that the Himalayan wolf is more “distinct than many of the currently recognised subspecies of the grey wolf, hence the debate around it potentially meriting full species recognition.”

“The Himalayan wolf is adapted to life in the extreme high altitude habitats of the Himalayas and the Tibetan Plateau and along with the snow leopard, is a top predator in this ecosystem. Predators enjoy a growing recognition for the important roles they fulfill, like maintaining ecosystem health and balance. Currently, this wolf is overlooked by science and conservation and local people are not aware that this wolf needs to be conserved and is of global relevance,” added Werhahn, who is a conservation biologist at the Wildlife Conservation Research Unit (WildCRU) at the Zoology department of the University of Oxford. The study is a collaborative project between researchers from the U.K., Nepal, Spain, Kyrgyzstan and the U.S.A.

The study stated that Nepal, with its northern area dominated by the Himalayan mountain range, holds a considerable Himalayan wolf population.

It emphasised that the “dramatic inaccessible high Himalayan landscapes may present important habitat refuges for the Himalayan wolf” and recommended that Nepal should play a leading role in Himalayan wolf conservation and act as a role model for the other range countries, which currently, along with Nepal, include India and China.

Sharing her experience of the study, Werhahn stated that the majority of local people in the Himalayan wolf habitats are Buddhists and have a comparable tolerant and integral attitude towards the natural world around them.

“They have coexisted for centuries in these challenging but immensely beautiful ecosystems. Local people are not aware that the Himalayan wolf, similar to the snow leopard, needs to be protected and that they should not kill it. Snow leopard conservation has been in place since some decades now and local people are much more aware to not kill snow leopards. Now, the same must happen for Himalayan wolves,” she said. “In fact, all predators, and these whole predator guild conservation actions can go hand in hand with conservation actions already in place and functioning for snow leopards,” said Werhahn while replying to a query about the attitude of the local people toward the Himalayan wolf.

As per the study, the evaluation of the conservation status of the Himalayan wolf and the subsequent implementation of conservation actions is “hindered by scarce data on taxonomic status, distribution and ecology.”

“Although the scientific evidence supporting its genetic uniqueness has been accumulating in recent years, reliable population estimates are lacking, ranging from 350 individuals in Jammu and Kashmir and Himachal Pradesh (in India) to several thousand in Tibet and Qinghai,” the study said.

Werhahn stressed that the main problem in conservation of this wolf species is scarce data and that it does not get the attention of science and conservation.

She further said that later some more specific actions to mitigate livestock depredation, ensure healthy wild prey populations and decrease illegal wildlife trade of its parts can be taken for the purpose of conservation of the Himalayan wolf. 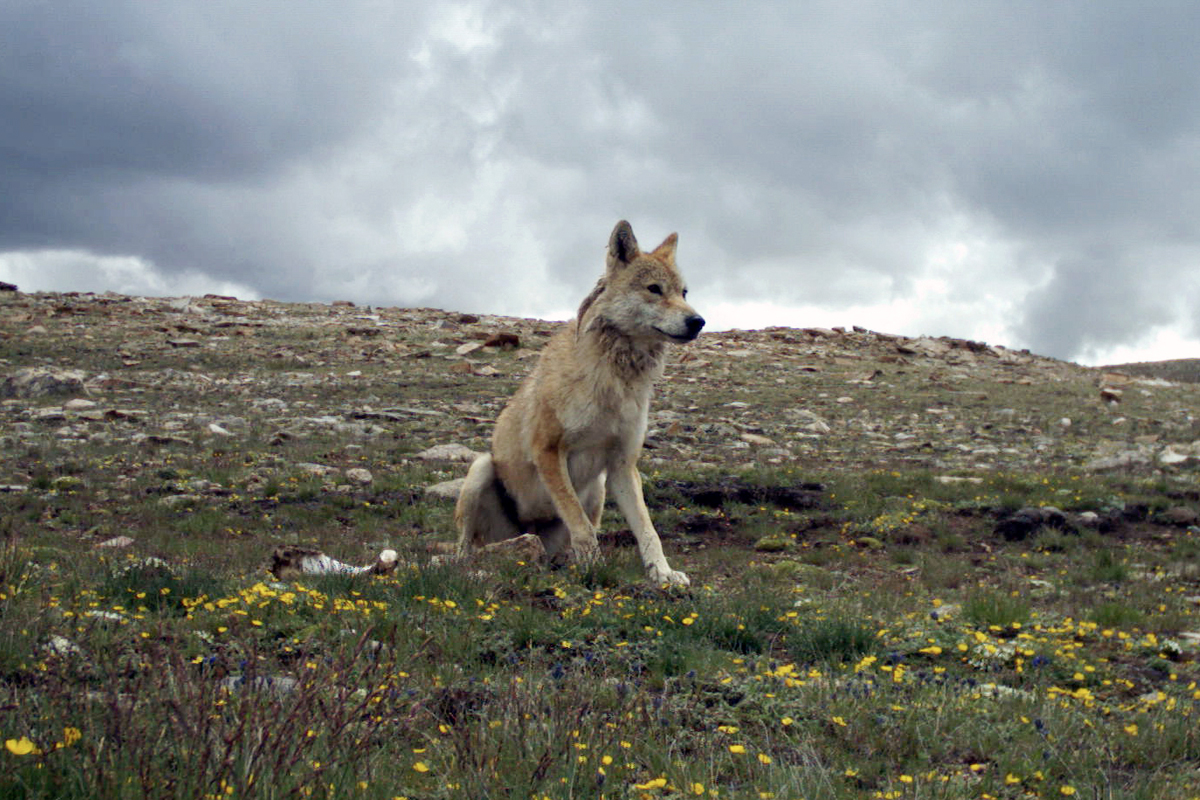 Reserchers suggest that the Himalayan wolf should be classified as a subspecies of the grey wolf or as an entirely distinct species. This will also act as a push towards increasing research and conservation efforts for the understudied and elusive predator. Photo by Geraldine Werhahn/Himalayan Wolves Project.

Werhahn, G. et al., The unique genetic adaptation of the Himalayan wolf to high-altitudes and consequences for conservation, Global Ecology and Conservation, https://doi.org/10.1016/j.gecco.2018.e00455