Upping the ante for disaster management in cyclone-prone Odisha

As the weekend began for the rest of the world, extremely severe cyclonic storm Fani tore into the east coast of India battering Odisha on May 3 and claiming over 30 lives.

The cyclone, one of the rarest summer cyclones, according to Odisha Chief Minister Naveen Patnaik, prompted an evacuation of a “record 1.2 million people in 24 hours” to shelters before it made landfall in the temple town of Puri.

Packing wind speeds of more than 200 kilometres per hour (kmph) and gusting speed of 240 kmph, it left a trail of devastation in coastal Odisha, including in state capital Bhubaneswar, before blowing through West Bengal and barreling through Bangladesh.

It tore apart critical infrastructure, especially power, telecom and water supply. Hundreds of thousands of trees were uprooted, blocking roads, breaking homes and damaging public infrastructure. In Puri and Khurda districts, the government now faces the challenge of having to set up the entire electrification afresh, Patnaik said in a press statement.

Patnaik stressed that because of its rarity, the tracking and prediction of the summer cyclone were challenging. “In fact, till 24 hours of landfall, one was not sure about the trajectory it was going to take because of the predictions of different agencies,” he said.

Fani was the first summer cyclone in 43 years to hit Odisha and one of the three to hit in the last 150 years, said Patnaik.

The state government and Puri district administration also evacuated tourists, ahead of the landfall. Innovative approaches such as mobile information centres helped East Coast Railway officials reach out to most of the visitors staying in hotels along the Puri seaside, which was declared disaster-prone and vulnerable to the cyclone.

The UN Office for Disaster Risk Reduction has praised the government’s “effective” evacuation, highlighting it had “saved many lives”.

But the clamour for food and shelter grows in Fani’s aftermath, reminding many of the devastation brought on by the 1999 supercyclone. Experts also underscore the need to strengthen coastal green infrastructure and tackle psychosocial trauma stemming from economic loss.

In Penthakota village close to the Puri sea beach, where 15,000 fisherfolk live by the sea, including some who have migrated from the state of Andhra Pradesh, a section of them had initially been reluctant to move to shelters in neighbouring Delta colony, given their experience in 1999 where facilities were not up to the mark.

When Mongabay-India spoke to them on May 2, 12 hours before the cyclone made landfall, the fisherfolk community expressed dissatisfaction over the shelter arrangements.

“We have seen the 1999 cyclone and we are not very happy with the arrangement of shelters. If there are prospects of damage, then let us be and let us die in our homes rather than in shelters,” Raj Bhao, a fisherman and a resident of Penthakota village, told Mongabay-India.

“During the 1999 cyclone we moved to shelters but we struggled to get water and food,” said Bhao. Others of his community also echoed the same sentiments and feared that the situation would be the same this time around too.

Tension prevailed in the area as tussles broke out between the fishing community and the administration over shifting to shelters. However, by night, with the help of local leaders and after much persuasion, the tension was defused and most of the villagers decided to shift to the shelters.

A section of the fishing community that shifted to the shelters close to Penthakota, felt betrayed by the government’s promise of cooked meals.

“A day before the cyclone hit Puri (on May 2), we were shown cooked food and were given rice and dalma (lentil and vegetable stew) but from May 3 we started getting beaten rice and gud (jaggery) and from the next day only plain beaten rice that too of substandard quality,” said Deepak Biswal, a resident of Penthakota, who is now in a Delta Colony shelter.

Biswal said he feels cheated as the government failed to fulfill its promise of taking care of them.

Another resident of the same area took refuge in another Delta Colony shelter said, “Our children are struggling as well as the women. Nobody from the government has come to take stock of our welfare. We are now given only beaten rice. The nearby shopkeepers also started black marketing.”

He asked: “Where is the government now who wanted to make us shift to these shelter homes?”

Reports of mismanagement of shelters elicited a positive response from the state government with the chief minister ordering the supply of cooked food for 15 days in the shelters. 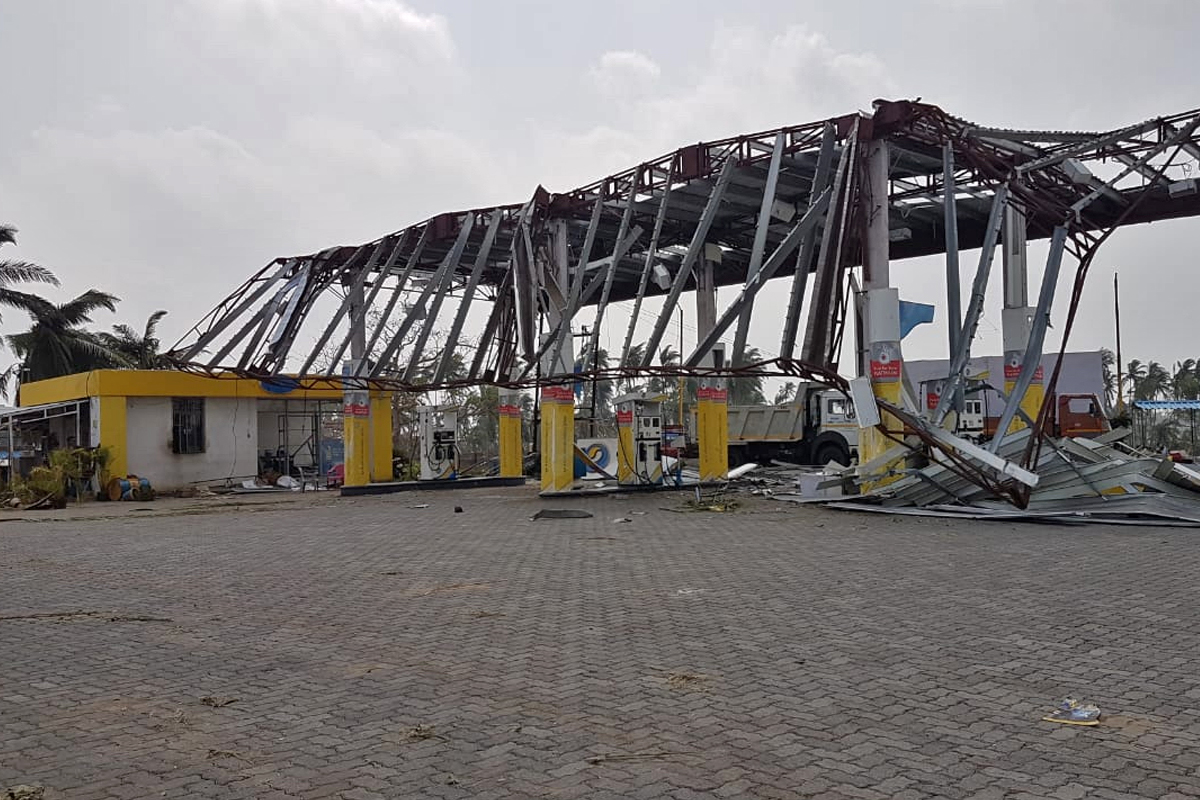 A petrol pump damaged by cyclone Fani on the Puri-Bhubaneswar highway, Odisha. Photo by Manish Kumar.

How different from 1999 cyclone

Puri residents have vivid memories of the havoc wrecked by the 1999 cyclone.

Some people opined that the 1999 event had a lesser impact on them while others felt many facilities given to them in 1999 were not provided in 2019.

Deepak Biswal, a daily wage labourer from Jajpur who had been living in Puri for years said, “During 1999 cyclone we got better food facilities as food packets were airdropped. This time we are struggling for food while many are seen to be praising the government for their assistance.”

“Come to slums and the shelters to know the reality and the misery against the tall claims of the government,” Biswal rued.

Subhash Chandra Mohanty, a lawyer in Puri said, “The 1999 cyclone was different for Puri. It did not make landfall in Puri while Fani had a landfall in Puri so the damage to Puri due to this cyclone has been more devastating compared to the disaster 20 years ago.”

Mohanty pointed out that people failed to understand how disastrous Fani could be to Puri.

Puri is dotted with hotels which are mostly within 500 metres of the beach. As Fani struck, window panes were blown away, trees smashed onto the ground taking along with them signboards and other property items.

The capital city of Bhubaneswar also saw major destruction of property. However, Puri suffered far more losses compared to Bhubaneswar. It is estimated that around 25,000 trees were uprooted in the twin cities and it is likely to take a week to restore the power in these cities.

Days after the cyclone, anger among people was surging high due to the inconvenience caused by lack of electricity, water supply and telecom facilities.

Drilled to live with cyclones

Tracing the shift in the approach to disaster management in the state from 1999 super cyclone to the 2013 Phailin to Fani 20 years on, development and environmental economics expert Saudamini Das described the transition as a “glaring contrast” in disaster preparedness, evacuation success and loss of lives from 1999 to 2019.

Das attributes this long-term success to efficient coordination between the various state departments, led by the Odisha State Disaster Management Authority, which was set up in the aftermath of the 1999 disaster.

“They have been proactive. Disaster resilient infrastructure has improved along with technological advancements such as weather forecasting. Government agencies have realised you can’t take it easy and people’s lives are at stake,” Das told Mongabay-India.

In 1999, the state had 23 cyclone shelters whereas, now, there are more than 200 shelters, and almost every coastal village has a shelter.

“They have been successful in forcing people to go and take refuge in these shelters and accept it as part of a routine cyclone preparedness procedure. The authorities have been efficient at restoring normalcy as soon as possible post-disaster and ensuring that people remember the damaging experiences of the cyclones in the past. So it has been drilled into them through intense awareness programmes,” elaborated Das.

“In some areas, as many as 95 percent of the residents evacuated, and they were aware of the precautions to be taken before a storm strikes. In 1999 it was 19 percent. People never wanted to leave their homes and there weren’t any shelters,” she said.

The data also reflects people’s compliance with government processes and mandates on cyclone evacuation and preparedness were shaped by the intense awareness drills since 1999.

“Even in developed countries, the compliance percentage is never more than 60 percent,” she said. 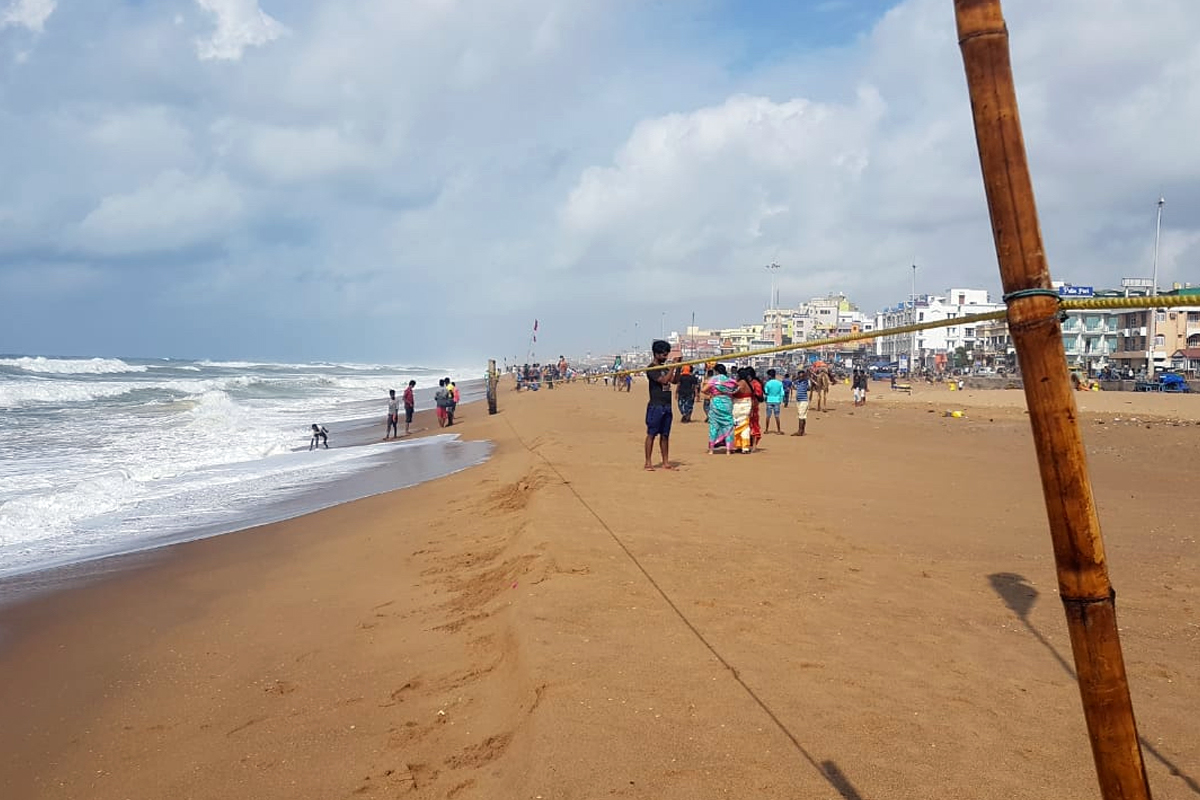 Barricades at Puri beach before the cyclone made landfall to prevent tourists venturing into the sea. Fishermen were barred from entering the sea too. Photo by Manish Kumar.

Upping the ante in cyclone management

Despite the progress, Das believes Odisha needs to step up its cyclone management game in the context of climate change-induced natural disasters.

“While human lives are protected well, we need to look at immovable assets such as livestock. Extreme weather events are becoming frequent and saving livestock is important to people who end up losing crops to natural calamities.”

In her research, Das found that the absence of provision for the evacuation of livestock to safety was one of the key reasons for evacuation failure in certain districts during Phailin.

“You can’t help protect agriculture but one can minimise livestock deaths by incorporating specific areas within cyclone shelters for the animals,” Das said.

In addition to the loss of livestock, the state also has to grapple with the economic damage which has implications for psychosocial needs of communities in the wake of natural disasters, pointed out Das.

According to Das’s analysis, the value of property lost in the state during the 1970s was estimated at Rs. 10.5 billion (nearly 11 percent of the average GDP of the state for the period). It increased nearly seven times in the 1980s and nearly 10 times in the 1990s.

“The next attempt should be enhancing cyclone resilient infrastructure to manage the economic loss stemming from property damage. This management is happening at the public level but not at the household level. People can’t bounce back from the disasters and move on with their lives if they are not financially secure and this has consequences for psychosocial well being,” she said.

Das batted for boosting coastal green infrastructure (by preserving mangroves and native species that act as barriers to storm surges and tangential winds) on an equal footing with cyclone resilient buildings.

“While casuarina trees have been extensively planted all along Odisha coast, they are fragile. Coastal vegetation should be mixed with native species such as Palmyra and cashews,” she said.

In 1999, mangroves significantly reduced the number of human deaths, Das stressed, based on her study on Kendarapara, one of the worst-hit coastal districts in Odisha.

“Villages with wider mangroves between them and the coast experienced significantly fewer deaths than the ones with narrower or no mangroves. Mangroves reduced human, livestock loss and property damage in 1999. The human death toll would have nearly doubled in the absence of mangroves in Kendrapara villages,” she said.

Although an early warning issued by the government evidently saved more lives than mangroves did, our simple comparison of costs and benefits indicates that protecting remaining mangroves in Orissa is economically justified, she said.

“We revealed that the beneficial effect was mainly due to mangrove vegetation, not physical characteristics of mangrove habitat. Human impacts on the ecosystem (deforestation) affected the death toll,” Das added.