Matriarch grandmas, aunts, uncles, nieces and nephews: elephants, much like us, have complex social lives. But Asian elephants from southern India could be changing their social lives, to adapt to human-use landscapes that are fast replacing their natural habitats.

Young male elephants, which are typically solitary, are now forming unusually large, and more long-term, all-male herds, finds a study published in Scientific Reports last week. This adaptation could be an effort to learn the ropes from older, more knowledgeable males on how to avoid getting killed in these areas that pose unnaturally high risks to elephants.

To elephants, human-dominated areas near forests – such as agricultural fields that often replace natural forests and connect one fragmented forest with another – are much like supermarkets: there is always abundant food to choose from. And if you’re a hungry, fast-growing, young male elephant, there’s nothing like feasting on cultivated crops (cereals like paddy and millets are far higher in nutrients including protein, calcium and sodium than forest fare such as wild grasses) to boost growth and health, both of which are important requisites to attain mates.

But the risks an elephant has to run if it ventures into human-dominated areas are many: stress and physical injuries caused when people chase elephants away from crops, the capture of ‘problem elephants’, as well as deaths due to retaliation, electrocution, train accidents and poaching. But though the risks are high, so are the gains. A study in northern Karnataka, for instance, found that crop-based diets are so rich that they even lower the stress levels of crop-foraging elephants.

Wildlife biologist Nishant Srinivasaiah would often spot such elephant herds moving across human-use areas – including crop fields – near his long-term study site in Karnataka’s Bannerghatta National Park. His interest in elephant behaviour even got him analysing YouTube videos of man-elephant interactions from the region. That’s when he noticed something unusual: some of the groups were comprised only or mostly of males.

“Why were male elephants moving across human-use areas?” wondered Srinivasaiah. “Where were they going? But there were other individual males who stayed largely within the forest. This got me interested in digging deeper into the individual idiosyncracies and decision-making in male elephants in the landscape in general and their sociality,” he said.

To find out if environmental factors – such as habitat contiguity and human-use – influenced the sociality (whether an elephant preferred to be alone or in a group) of male Asian elephants, Srinivasaiah and his colleagues first identified a suitable study area. The approximately 10,000 square kilometre-landscape included protected areas (Bannerghatta National Park, Cauvery and Cauvery North wildlife sanctuaries), reserve forests, human settlements and agricultural land across southern Karnataka and northern Tamil Nadu.

Field surveys and information from forest guards helped the team shortlist areas that both people and elephants used, to install camera traps. Of the 20,124 photographs of elephants they obtained between February 2016 and December 2017 from these camera traps, the team identified individual elephants from 1,430 photos and categorised them into three groups: mixed-sex groups (that contained male and female elephants), all-male groups and solitary males.

Using standard procedures, the team categorised each of the 248 male elephants they identified from these groups into age classes. Age correlates with sexual maturity; so the team could also classify every male as a juvenile (sexually immature males that are less than 10 years old), adolescent or sexually mature-but-socially immature male (10 to 20 years), or mature (bulls that were both sexually and socially mature, above 20 years of age) male.

As expected, the photographs revealed that juvenile males were sighted mostly in mixed-sex groups; male elephants continue to stay in the herd they are born into until they hit adolescence. The results also revealed that in forest habitats, male elephants tended to become increasingly solitary with increasing age. Male bulls were, therefore, mostly solitary. But adolescents were either solitary or in all-male groups, in equal proportions. These males were most likely to be part of all-male groups and grouped with other males in large herds – of up to 12 elephants – almost exclusively in croplands also containing isolated forest patches, a sign that these recent all-male groups here could be in response to environmental factors.

These all-male groups were also unusually long-term. While it is common for some males to team up with others for a single season or a few weeks, these new all-male groups lasted for “a few years”, according to the authors. Interestingly, studies conducted in the same region more than two decades ago do not mention such large and stable all-male groups at all, write the authors.

These male elephants forming long-term associations are more than just co-occurrence or grouping by chance, said Srinivasaiah. Could it be for “social buffering” – wherein a social support system from being part of a group can help “buffer” or reduce stress? While social buffering is known to help reduce acute stress in elephants, it could be another reason in the case of these adolescent male elephants, he points out.

“These elephants need to learn to utilise the novel landscape efficiently and to avoid getting killed,” said Srinivasaiah. “Hence, associating with older, more knowledgeable and experienced males is a strategy used by some of the younger males to survive and persist in high-risk landscapes. Otherwise, they would have had to do the same through trial and error, which could be costly.”

This establishment of all-male groups in response to anthropogenic factors thereby modifying their own sociality is an important finding that suggests not just how adaptable elephants are but also how human influence is changing the natural life around us in the Anthropocene, he adds. 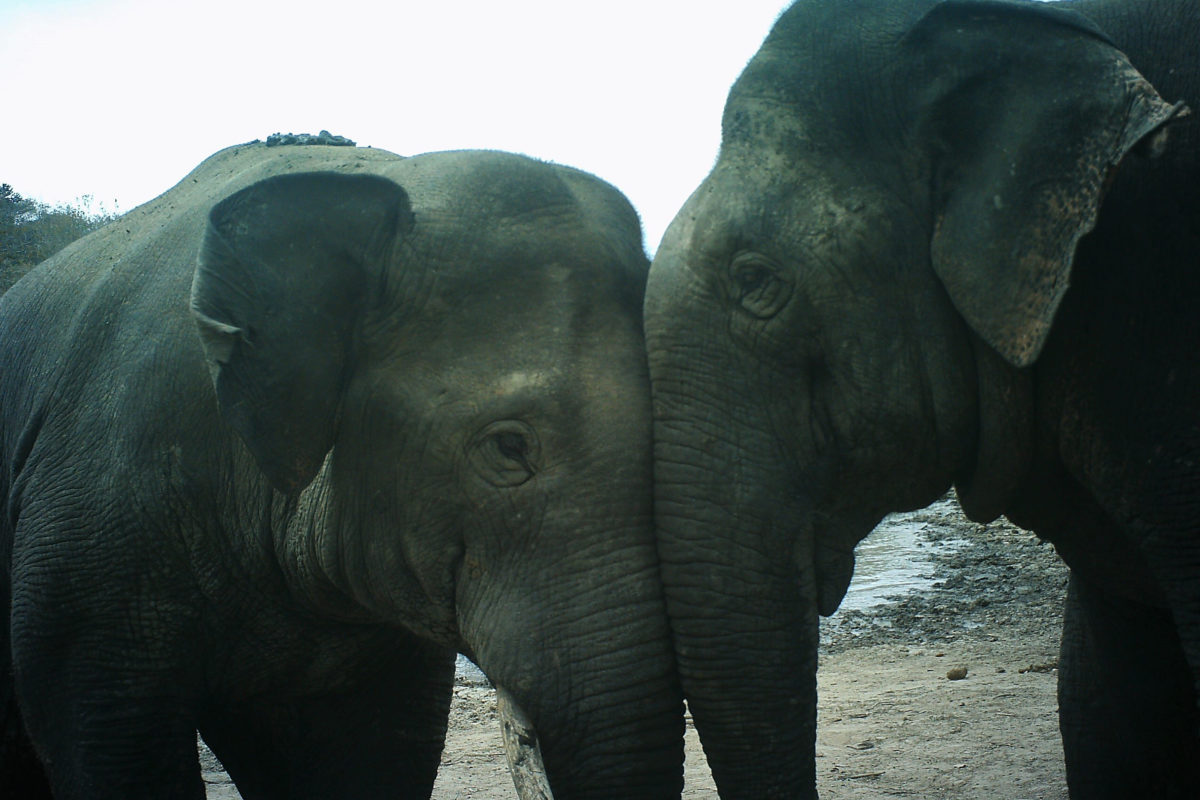 Social interaction between a younger and an older male elephant. Adolescent elephants in south India are learning to adapt to human-dominated landscapes from older bulls. Photo by Nishant Srinivasaiah/FEP.

What could happen with current rates of habitat loss, a common feature of the Anthropocene epoch that we are currently living in? If elephant home-ranges within forests are diverted to non-forest activities, they will have to adapt to this change or perish, declares Srinivasaiah.

“Elephants are survivors, hence most often they will choose alternative ways to persist, and feeding on crop fields even if it’s risky cannot be discounted,” he adds.

Elephants are arguably one of the most adaptive mammalian species and their social behaviour may vary depending on environmental conditions, agrees scientist Prithiviraj Fernando, Trustee (Chairman) of the Centre for Conservation and Research in Sri Lanka, who studies Asian elephants in the island nation and did not participate in the current study.

“For example, in Sri Lanka, large all-male groups are observed primarily in areas with high resource availability,” he said.

This study is one of the first ever studies that focus on male Asian elephant sociality and its variation in relation to habitat conditions, he wrote in an email. “Conducting studies similar in other parts of the range would help determine whether the patterns observed by Srinivasaiah and his colleagues are unique to their study area or characteristic of Asian elephants everywhere.”

According to the authors of the study, it could also “be imperative that future attention is focused on the management and conservation of [these] young dispersing males” since it is this grouping of adolescent males that brings elephants into conflict with people in agricultural landscapes.

“Young dispersing males are very impressionable and if associated with non-crop foraging older bulls, will not learn crop-foraging behaviour or can even unlearn it,” said Srinivasaiah. Mitigation measures such as capturing key individuals within a bull group may therefore backfire, he adds, as these older and experienced bulls are essential in a male elephant society to help guide the younger bulls and also discipline them when moving across villages, thus keeping conflict to a minimum.

“The key to living with elephants may lie in understanding their social complexity and harnessing this new found knowledge to learn how to modify our own lifestyle practices to make them more compatible with the elephants’ use of an area, and be more flexible in our own approaches and behaviour towards elephants,” said Srinivasaiah.