Making a case for the conservation of tiger reserves in India, a study has worked out the monetary value of the reserves and deduced that for every rupee invested, the returns amount to an average of Rs. 2,500 per tiger reserve.

A latest government study that calculated the economic valuation of 10 of 50 tiger reserves of the country, reveals that for every rupee spent on their management, the reserves provided benefits ranging from lowest of Rs 346.7 to highest of Rs 7,488 within and outside the tiger reserves. Mongabay-India analysed these benefits for all the ten reserves and found that, on average, it translated to Rs 2,500 per rupee for each tiger reserve.

At present, there are 50 tiger reserves across 18 states in the country. This report was released along with the All India Tiger Estimation – 2018 and the Management Effectiveness Evaluation (MEE) of Tiger Reserves 2018 report by Prime Minister Narendra Modi on July 29, 2019. The latest tiger estimation pegged the population of India’s national animal, at 2,967.

Read more: More tigers recorded, but with habitats under threat will the uptick continue? 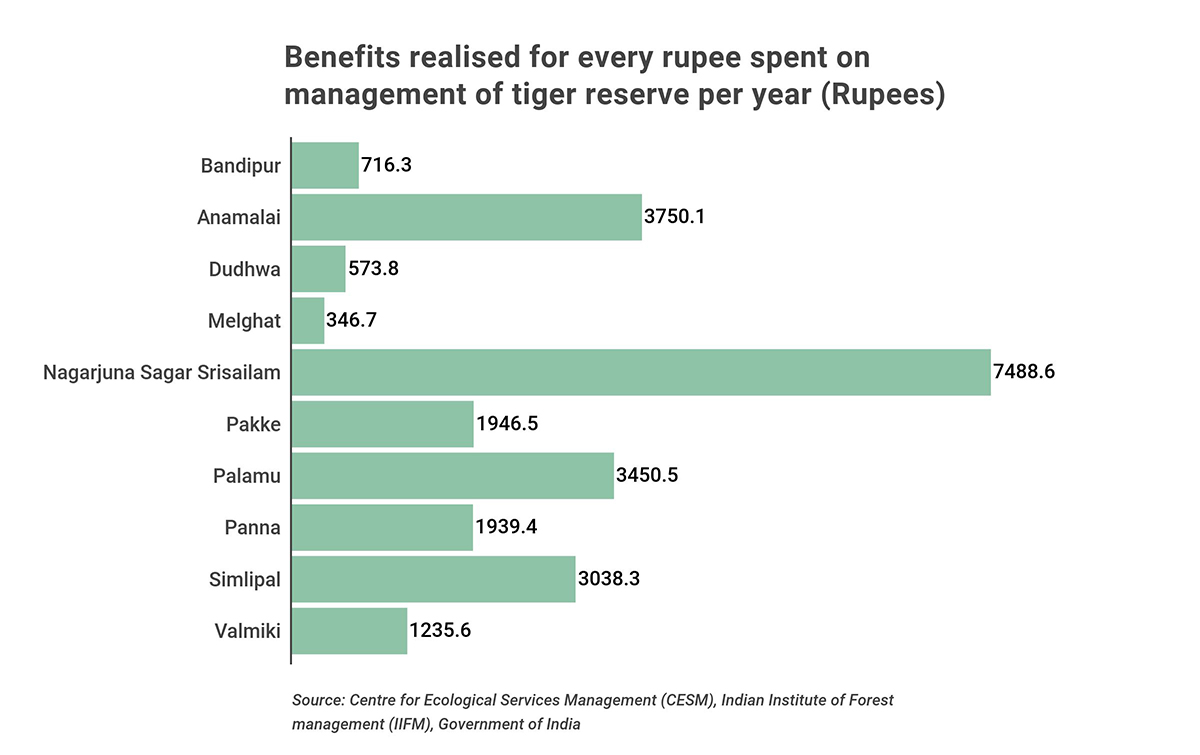 The study also found that together these 10 tiger reserves provide annual tangible and intangible benefits worth Rs 5.96 trillion (Rs 596,502.14 crore). A rough calculation shows this is equal to about 17.94 percent of Rs 33.23 trillion (Rs 33,23,988.66 crore), which is the Indian government’s total expenditure through budget and resources of public enterprises for 2019-20.

To make it simpler to understand, all the benefits from the total of Rs 5.96 trillion can’t be realised directly. For instance, the benefits like carbon storage and soil conservation will happen if we just let the forests remain undisturbed. But then there are also benefits like non-timber forest produce which directly impact people living around these forest areas.

For instance, the report noted, that population of around 100,000 is dependent on water supply from the Srisailam Dam in Andhra Pradesh’s Nagarjunasagar Srisailam tiger reserve and about 1.2 million gallons of purified water is supplied per day to nearby Srisailam town.

The results of the study indicate that tiger reserves provide a host of ecosystem services which are of significant value in a time when countries are investing heavily in climate change adaptation and mitigation.

The study stressed that the “tiger reserves offer resilience for climate change and other environmental challenges the world faces today by conserving what matters” and are “crucial if future generations are to have an opportunity to enjoy natural landscapes that exist today.”

The report emphasised that forests play a pivotal role in augmenting water flows and tiger reserves “conserving the forests, wetlands and other ecosystems have a profound impact on the hydrological processes of the watershed.”

“When precipitation falls on a forested area, it is intercepted by dense canopy cover, thereby reducing its intensity. Some of the water that reaches the surface evaporates back, some of it goes as a run-off and some of it is absorbed by the roots of the trees and moves out into the atmosphere through the process of transpiration. After the soil moisture reaches its field or saturation capacity, the remaining water recharges the groundwater table,” the report explained.

It pegged that benefits related to the provisioning of water from these 10 tiger reserves at over Rs. 330 billion (Rs 33,000 crore). The significance of this amount is highlighted when compared to the total budget of the Indian government’s newly created Ministry of Jal Shakti in 2019-20 budget which is Rs. 282.61 billion (Rs 28,261.59 crore). The Jal Shakti ministry includes the department of water resources, river development and Ganga rejuvenation and the department of drinking water and sanitation which, this year, have been allocated Rs. 82.45 billion (Rs 8,245.25 crore) and Rs. 200.16 billion (Rs. 20,016.34 crore) respectively.

The report emphasised that economic valuation helps in “recognising, demonstrating and capturing the ecosystem services values into the mainstream socio-economic system and policymaking.”

“Recognition of these values is likely to provide an evidence base for enhanced investment (mainly by the government) and targeted management practices,” it noted. 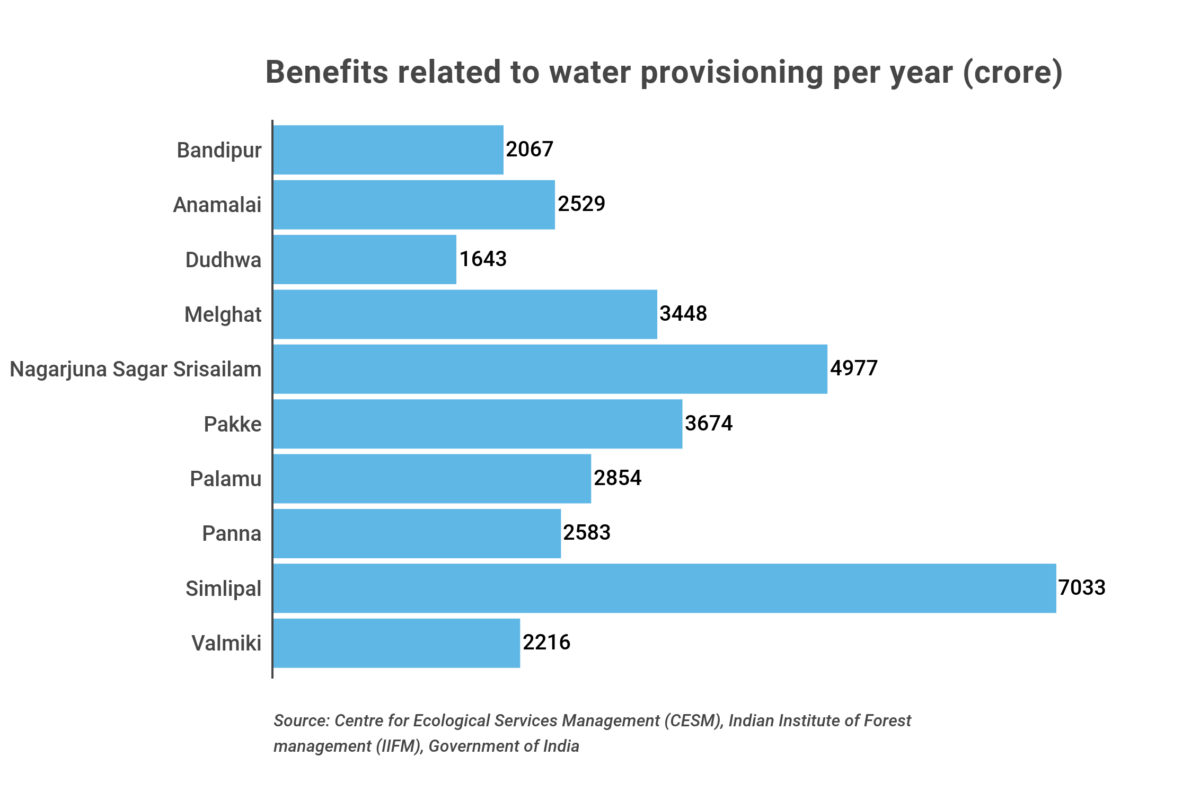 The analysis also emphasised the impact of tiger reserves on the health and overall well-being of human beings.

As per the study, the collective worth of the ecosystem services having a direct-indirect impact on human health was found to be in the range of Rs 110.14 – 345.93 billion every year (Rs 11,014 crore to Rs 34,593 crore) for the selected tiger reserves.

“I have a simple understanding of the report that it gives a new perspective on how we look at our natural resources. Quantifying the ecosystem services like carbon sequestration, provisioning of freshwater, oxygen and then the direct benefits like tourism, timber, non-timber forest produce etc is a complex thing,” Parveen Kaswan, an Indian Forest Service officer currently posted with West Bengal’s forest department, told Mongabay-India.

“I think such studies nudge policymakers and user agencies to take alternate route than diverting good forests. It puts a value on things which people take for granted. Even in the case of resource utilisation there is a debate of who should get what. Such studies tell us what we are talking about. Saving the environment makes economic sense also,” said Kaswan.

The findings of the study are significant as, according to the report, a “proper understanding of what ecosystem services are available from a tiger reserve and who has access to them can, therefore, assist in understanding how costs and benefits of conservation are distributed, and thus help to address conflicts related to tiger reserves.”

Across the country, tiger reserves and wildlife corridors, which connect such reserves, are increasingly under threat from developmental projects such as highways, railway lines, dams, mining and others.