It was a bright afternoon after two days of heavy rain in Kerala and Professor P. Manimohan’s two Ph.D. students K. P. Deepna Latha and K. N. Anil Raj were scouring the freshwater Myristica swamps of Kulathupuzha in Kerala’s Kollam district for fungi. Their gaze fell on a group of pale brown mushrooms sprouting amid the sandy soil among the decaying leaf litter. Intrigued, they examined and noted the morphological features—size, colour, shape, and texture—of the fungi and plucked out some samples to take back to the lab.

A molecular analysis revealed that it was a new species—they named it Laccaria violaceotincta after its violet-tinted gills and published their findings in the journal Phytotaxa earlier this year. Laccaria is a genus of mycorrhizal fungi that forms an association with host trees. Previously, only nine species of Laccaria have been found in India and four of them have been described from Kerala.

The discovery was part of an ongoing effort to document the mushrooms of Kerala by the group at the University of Calicut. In fact, Manimohan’s teams have previously discovered and published about 222 new mushroom species over the past 30 years.

Tucked away amid the low-lying valleys of the evergreen tropical forests of the Western Ghats—a biodiverse hotspot—lie patches of a special kind of ancient ecosystem: the Myristica swamps. As the name suggests, these swamps are dominated by evergreen trees of the Myristica genus belonging to the Myristicaceae family, one of the most primitive families of flowering plants found in the tropics and renowned for the nutmeg tree species. Many of the swamp trees feature distinct aboveground roots that can withstand the waterlogged swampy conditions. 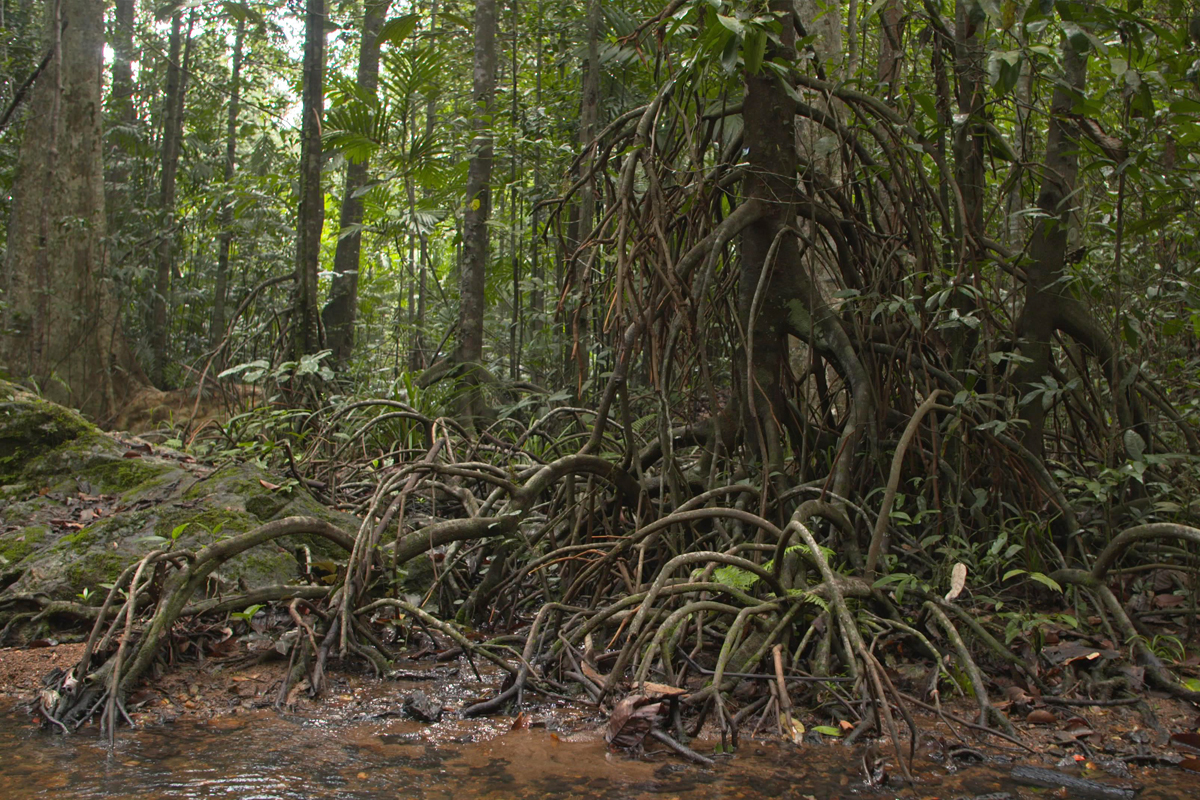 The Myristica swamps in the Western Ghats have one of the most primitive families of flowering plants found in the tropics. They are characterised by aboveground roots that can withstand perennially waterlogged conditions. Photo by Pradeep Hegde.

In May 2018, Gayathri Sreedharan and her colleague Malhar Indulkar were scouting the northern Western Ghats of Maharashtra for perennial streams for a study on how a deadly chytrid fungus is affecting amphibians in the region, when their local field assistant from Hevale (Dodamarg taluka, Sindhudurga district) led them to a sacred grove named ‘Kanhalachi Rai’ where he said the trees are very different and where there is water throughout the year.

“The first time we stepped in, it was very clear that it was something different and the forest type inside was completely new. It was more canopied than the rest of the area and had really big trees. We had a hunch it was Myristica but confirmed it by sending pictures to different people. We knew for sure then this is an unreported Myristica, the first of its kind from Maharashtra,” elaborated Sreedharan, a Ph.D. student at CSIR-Centre for Cellular and Molecular Biology, Hyderabad.

The striking discovery, published in Current Science in 2018, extends the current northernmost distribution of Myristica swamps from Goa to Maharashtra and provides evidence that the region was once home to primeval swampy forests. With an area of 0.018 square kilometres, the vestigial swamps are bordered by paddy fields from one side, which are harvested twice a year because of the watershed potential of the nearby swamps; the other side has a rubber plantation.

Rare tree species, earlier thought to have been found only in the southern and central Western Ghats, have recently been discovered further up north in the swamps of Valpoi taluka in Goa. Back in 2000, scientists described a new large-leaved tree species—Semecarpus kathalekanensis (Kathalekan Marsh Nut)—listed as Critically Endangered by the International Union for Conservation of Nature (IUCN), from a few swamps in Kathalekan, Uttara Kannada district of Karnataka. But in 2014, a group reported finding the species 200 km north in the Myristica swamps of the northern Western Ghats of Goa. In the same site, the team also spotted another swamp species almost considered extinct, Syzygium travancoricum Gamble.

A treasure trove of endemic and rare species

One of the most pressing reasons scientists are allured by the swamps is the unique and precious flora and fauna inhabiting them. For her Ph.D. thesis, Joyce Jose and her colleagues surveyed the Myristica swamps of Kerala from 2004 to 2007. T.J. Roby, now an assistant professor at St. Aloysius College, Thrissur had mapped 60 patches of swamps and documented the flora.

Among the vegetation, they counted 82 species of trees and 94 species of herbs and shrubs of which 28 plants were found to be endemic (found exclusively) to the Western Ghats while 12 were included in the IUCN Red List of Threatened Species. Their comprehensive report showed that these ecosystems are rich in biodiversity hosting 23 percent of butterfly species, 11 percent of spiders, 8.4 percent of fish, 26.6 of percent birds, over 50 percent of amphibians, over 20 percent of reptiles and 6.6 percent of mammals among the species found in the state of Kerala.

Remarkably, despite the swamps comprising a mere 0.004% of the total land area of Kerala, they boast 16.3 percent of species that are endemic to the Western Ghats—notably 42 percent of fishes and 44 percent of amphibians. And 24 percent were in the IUCN Red List of Threatened Species—specifically, 67 percent of reptiles were Red Listed.

Read more: Why the ancient Myristica swamps need to be protected.

But this data is now outdated mainly because of taxonomic revisions, cautions Joyce Jose, now an assistant professor of zoology at St. Thomas’ College, Thrissur, Kerala, calling for renewed studies to re-document the flora. “These swamps are jewels. We need studies that extend 20 to 30 years covering every aspect of these swamps to make sure that we have good knowledge and therefore can formulate the best conservation and management strategies.”

The seeds of the endangered swamp tree Myristica fatua var. magnifica (Bedd.) Sinclair are large (5 cm in length), heavy (weighing on average 20g) and coated by a bright red or yellowish-orange nutrient-rich lacy aril, which is consumed by fruit-eating animals such as the Malabar grey hornbill, Malabar grey hornbill, Malabar giant squirrel, lion-tailed macaque and Nilgiri langur. After dispersal, seeds dropped near the parent tree can be predated upon by rodents, for example, or germinate. But the seeds cannot germinate if dropped outside of swamps owing to the unsuitable climatic conditions.

During her Ph.D. back in 2013, Shivani Krishna observed an unusual sight in the swamps of Kulathupuzha reserve forest: the seeds of M. fatua magnifica were found near the burrows of the freshwater crab Barytelphusa guerini. But she was puzzled because the seeds appeared to be too big to be carried by the tiny crabs. She devised an interesting experiment to probe into the role of crabs in removing the dispersed seeds and the fate of the seeds.

Krishna tethered seeds, both with and without arils, to fishing lines and placed them under the swamp trees in fragmented and contiguous sites. After spending several nights under the canopy without any movement, she observed—much to her amazement—that the crabs, which emerge at night, indeed carry these seeds into their burrows, sometimes as far as two metres. In fact, the study divulged that the crabs transported 63 percent of the seeds she placed on the forest floor compared with only 25 percent by rodents.

“It was hard to believe that crabs which were smaller in size compared to the seeds carried them into their burrows,” said Krishna, currently an assistant professor of Biology at Ashoka University.


The freshwater crab Barytelphusa guerini feeds on the aril of a seed of Myristica fatua magnifica and then carries it inside the burrow. Interestingly, they do not predate on the seeds. Video by Shivani Krishna.

Interestingly, she noticed that while the crabs consumed the lipid-rich arils, they did not predate on the seeds. And surprisingly, 13 percent of the seeds actually germinated from the burrows. A few mangrove crab species have been shown to be voracious seed predators, she said. But this study shows that “crab burrows can function as refugia for seeds by facilitating spatial and temporal escape from predation in this highly endangered tree species,” the authors concluded.

Working in total darkness was a challenging experience, recalls Krishna, despite having worked for seven years in tropical forests. “Navigating from one burrow to the other in the waterlogged swamps without getting stuck in one of the aboveground roots was an adventure.”

She also had to contend with wild animal encounters such as pit vipers, bears, wild boars, and elephants.

At night the swamps are abuzz with activity as other animals emerge. The pulsating murmurs of male frog calls fill the air. In 2013, Robin Abraham of the University of Kansas and Dr. Anil Zachariah, a passionate batrachologist from Wayanad, along with colleagues, went on several expeditions into the Myristica swamp forests of Kulathupuzha Reserve Forest to document the poorly understood history of its amphibians. There, they spotted a 3.5cm-long rusty-brown tree frog with small black speckles found only in the periphery of the swamps during the breeding season (mid-May to early June), with behaviours unlike any other they have encountered. When they sequenced its DNA, they found it was an entirely new genus and named it Mercurana myristicapalustris.

Determined to find out more about its breeding habits, Abraham’s team took turns to closely monitor individual behaviour from evening until night—sometimes up to 3 am. To their delight, it was the first time they caught a glimpse of a female, which sported an appearance completely different from males. They were larger (4.5 cm from snout to rearside) with a beautiful green body with yellow sides and black blotches.

Five types of calls were recorded from males that were perched on tree saplings or understory vegetation. Initially, the individual calls were of moderate-intensity but sometimes they synchronized with the calls of other males erupting into a loud chorus, which could be heard up to 20 metres away.

The researchers believe that the first type of call is an advertisement to females. “We think this is a strategy to alert females of the location of male aggregations over the choicest breeding sites,” explains Abraham. “We have also noted other species such as Beddome’s tree frog (Beddomixalus bijui) and the Fungoid frog (Hydrophylax malabarica) perform this curious behaviour of calling together from aggregations.”

The second call type—screechy pulses that were louder—was heard accompanying combat behaviour between males, which consisted of pushing, wrestling and kicking. The team is still uncertain about the function of the other three call types because they could only record them once. “More observations are required to determine their significance,” said Abraham.

“Incidentally, the frog is named after Freddie Mercury, the very influential and flamboyant, late lead singer of the rock band Queen who spent a significant part of his growing years in the northern part of the Western Ghats.” He is known to have possessed an incredible vocal range.

Type one and two calls of the male endemic tree frog Mercurana myristicapalustris. The first is thought to be an advertisement for females while the second was heard during physical combat between males. Source: Abraham et al. 2018.

Another interesting and peculiar mating behaviour was the choice of the site to lay eggs: the females made shallow burrows in the soil using their pointed snout and lay their eggs inside. This could be the first record of using snouts for digging burrows by the Asian-African tree frog family Rhacophoridae, says Abraham.

“Such behavioural observations can be tedious but pay rich dividends in terms of expanding our understanding of these animals’ biology,” stresses Abraham. Occasionally, the team had to face wild animals such as elephants passing through the vicinity, “and we wouldn’t want to take chances with them.”

The researchers are concerned that climatic deviations may adversely affect the populations of M. myristicapalustris. Because they breed during the summer showers of the pre-monsoon season in May, “the developing larvae rely on the subsequent southwest monsoon rains from June to September to complete development,” explains Abraham. But with more than a month of delay in the arrival of the monsoon of 2019, tadpole survival is likely to be affected, he surmises. 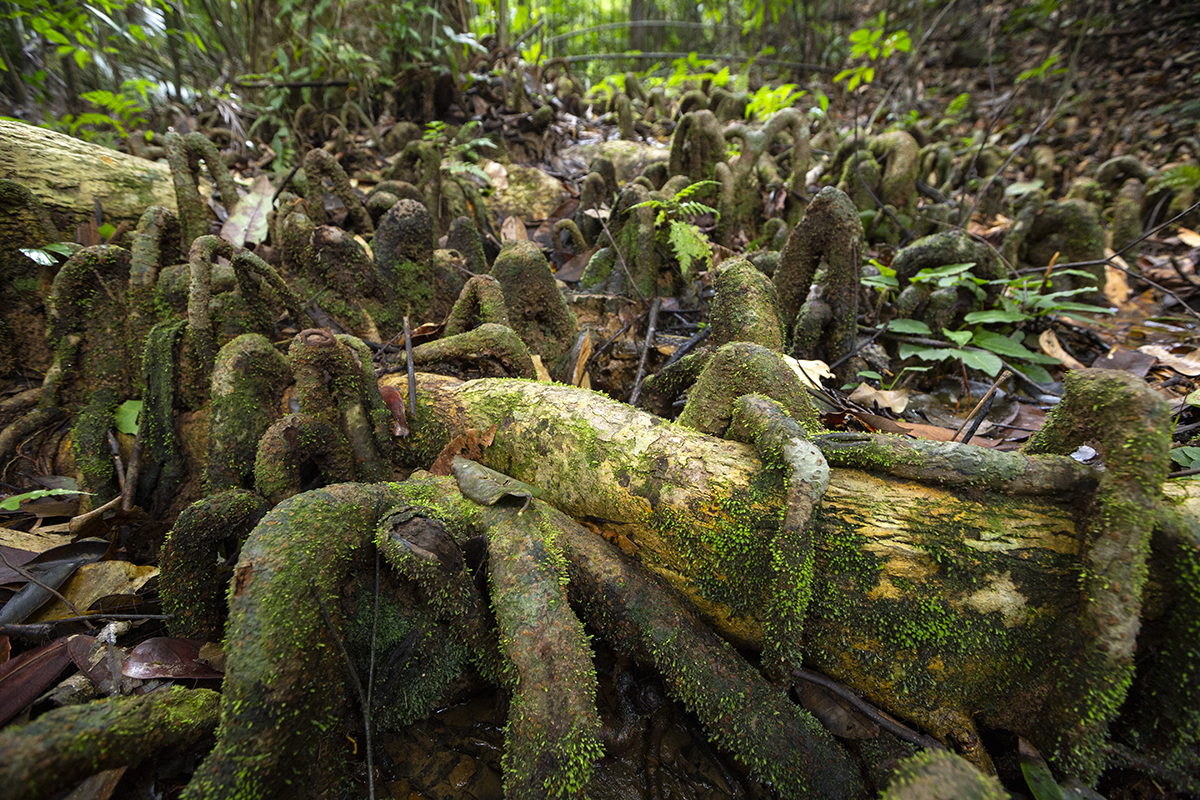