The low-lying valleys of the evergreen tropical forests of the Western Ghats harbour a rare, ancient ecosystem: the Myristica swamps. Comprised mainly of evergreen trees of the Myristicaceae family—one of the most primitive families of flowering plants renowned for the nutmeg tree species, the swamps are rich in biodiversity and scientists have been discovering new species to this day.

With a history going back millions of years—long before the introduction of agriculture—the swamps are believed to have once traversed the entire stretch of the Konkan coast, which extends across the west coast of India. As the duration of the monsoons became shorter, they shrunk in size and over the past few decades they were converted to paddy fields or plantations of areca nut, rubber, coffee or teak. Now, these fragile primeval forests are a fast-disappearing and fragmented habitat confined to small patches—so much so that they are considered among the most endangered ecosystems of India.

First reported in 1960 from the Travancore region of Kerala, the primeval swamps are found in the flat, forested valleys of Shendurney Wildlife Sanctuary, Kulathupuzha, and Anchal in the southern Western Ghats of Kerala—consisting of around 60 patches below 1.5 square kilometres (sq km) in area in total.  They are also found in the Uttara Kannada district of Karnataka—around 51 patches covering an area of 0.098 sq km. Additional patches have also been found in the Shimoga and Dakshina Kannada districts of Karnataka by senior scientist T.V. Ramachandra and his team, but they are yet to publish their findings.

Until recently, the northernmost distribution of the swamps in the Western Ghats was reported to be from Goa’s sacred grove ‘Nirankarachi Rai’ in Bambar, Sattari taluka. But in 2018, researchers discovered Myristica swamps further up north in the Western Ghats of Maharashtra. 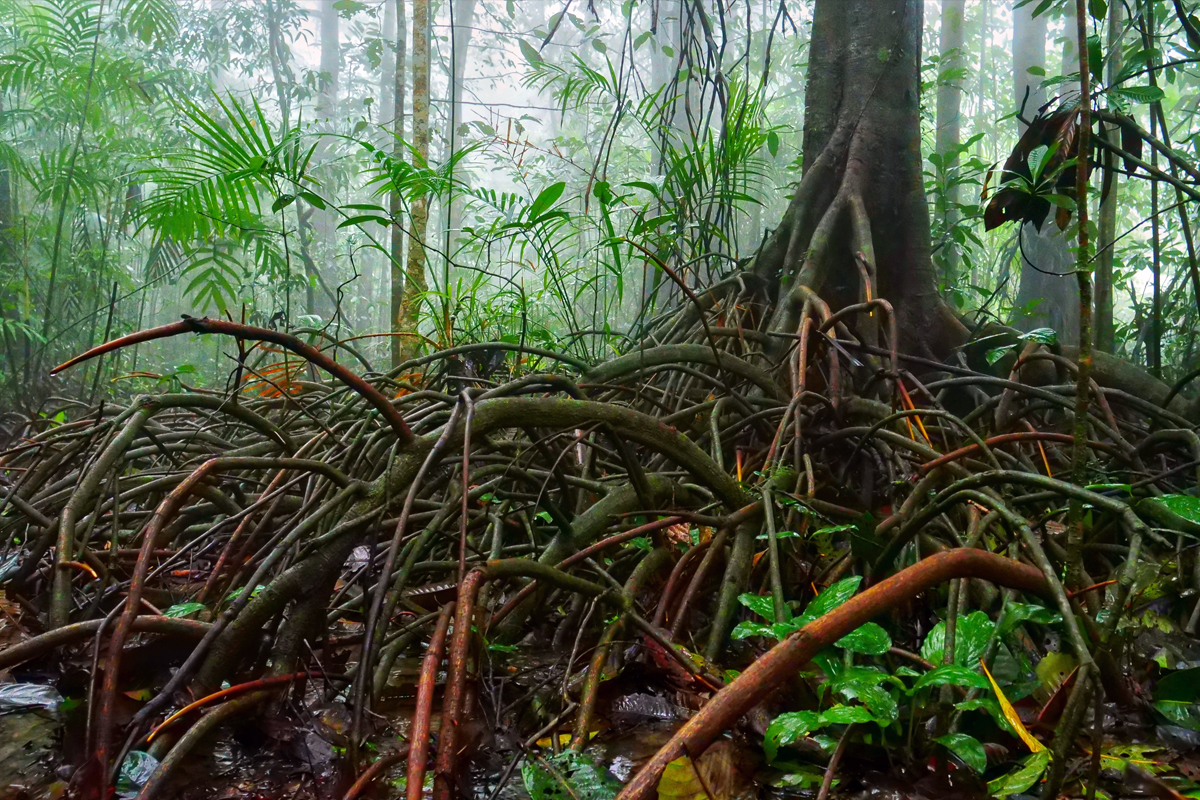 Myristica swamps are relict tropical ecosystems thought to be millions of years old and are spread across the Western Ghats in Kerala, Karanataka, Goa and were recently discovered in Maharashtra. Photo Pradeep Hegde.

In the monsoons, the swamps, typically located near a central stream, are inundated with freshwater gushing in, creating a unique habitat for a host of species. The hallmarks of the swamps are two tree species, exclusively found in the swamps (a.k.a. endemic), that thrive in the waterlogged conditions: Gymnacranthera canarica (also known as Gymnacranthera farquhariana) and Myristica fatua Houtt. var. magnifica (Bedd.) Sinclair. The former is listed as Vulnerable while the latter is Endangered, according to the last IUCN Red List assessments in 1998—which desperately need updating.

Unlike regular subterranean tree roots, the evergreen trees have evolved to live in the waterlogged conditions of the swamps and feature two types of bizarre-looking roots: knee roots and stilt roots. The former pop out from the ground and are used for exchanging gases while the latter sprout from the main trunk and help support the trees mechanically in the soft and unstable soil. Such aerial roots are common among trees found in tropical mangrove swamps.

Owing to their ability to hold water all-year-around, Myristica swamps play a crucial role in sustaining water in the streams and groundwater sources. The “swamps act as ‘sponge’ in a landscape,” said T.V. Ramachandra of the Centre for Ecological Sciences, Indian Institute of Science (IISc), Bengaluru, explaining that they help in “retaining the water (during monsoon) and then slowly release to the stream during lean seasons.” Considering the linkages of water sustenance with the swamps, these fragile ecosystems were conserved as sacred by local people during pre-colonial times

In addition, during heavy rains, they help in moderating floodwaters. On the recent flooding of Kerala in 2018, Ramachandra noted that “despite highest rainfall and similar terrain, the regions with Myristica swamps handled the floods, while, locations such as Vynaad and Kodagu (land of greedy politicians and business folks who disrupt the stream network by the construction of resorts and buildings along the natural water path) experienced a high level of damages.”

What’s more, these swamps have the potential to mitigate the impacts of climate change. Ramachandra and his colleagues conducted a study on the ecology of the Myristica swamps of Kathalekan hamlet of Siddapur taluk in Uttara Kannada district of Karnataka. They found that the swampy forests have higher aboveground biomass and carbon storage than neighbouring non-swampy forests. With a higher ability to sequester carbon than non-swampy forests, these relict ecosystems have been “silently helping the globe in the removal of carbon” amid the backdrop of global warming, highlighted Ramachandra.

Climate change and other threats from humans

A study published in 2016 examined the impact of climate change on the distribution of five species of Myristicaceae in 2050 to 2080 under two scenarios. The models showed that both swamp specialists—Gymnocranthera canarica and Myristica fatua—will suffer from a reduced overall suitable habitat area. While G. canaria is estimated to drop by 1.04 percent in current area, M. fatua will shrink by 1.68 percent under a scenario of rapid economic and population growth till mid-century with a balance in fossil and non-fossil energy sources.

Ravikanth, associate professor at the Asoka Trust for Research in Ecology & the environment and the senior author of the study, expresses concern over the effect of erratic and high rainfall patterns on the regeneration of swampy species. “While floods could result in seedlings (and seeds) being uprooted and being washed away, dry spells, on the other hand, could result in higher mortality of the seedlings,” he noted.

“Both the species require flowing water for survival and for the germination of their seeds,” explained Ravikanth. “Our studies [unpublished] have shown that even a few meters away from the swamp, the seeds have poor germination (less than 20%) and those that do germinate have high mortality rates (almost 100%) in summer (within one year of their germination).”

Although the estimated percentage of reduction in the area of the swampy species is not high, Ravikanth points out a myriad of additional threats: changes in land-use, diversion of water for agricultural purposes and the encroachment of swamps.

The study also reveals that most of the suitable areas of swamps lie outside the protected area network and are highly vulnerable to human exploitation. For instance, the brightly-coloured arils covering the large seeds are locally used as a spice for wild nutmeg. “While the arils of M. fatua are extensively harvested and have a good market, the arils of G. canarica are used as an adulterant. Our recent [yet to be published] study indicated that in many areas of the Western Ghats, the fruits are pre-maturely harvested (due to competition among harvesters). The pre-maturely harvested seeds are not physiologically ripe and do not germinate at all,” revealed Ravikanth. “In fact, even if they harvest the mature fruits, the harvesters tend to throw all the seeds (thousands of them) at one place resulting in poor regeneration.” 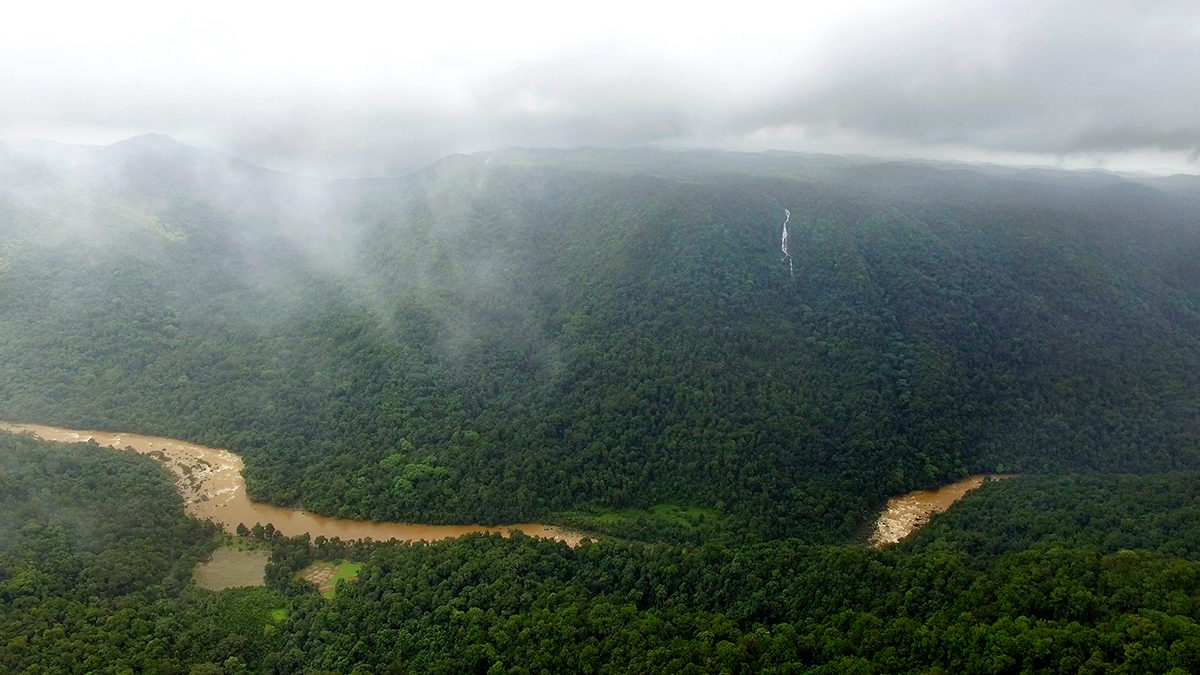 The Aghanashini River in Karnataka is a hotspot of Myristica swamps. These ecosystems are highly vulnerable to human exploitation and climate change. Photo by Ashwin Bhat.

Priority for conservation and the way forward

Scientists concur that the delicate and fragmented Myristica swamp ecosystem is facing multiple threats and needs urgent conservation efforts. Given the higher biomass and carbon sequestration potential of the swamps, forest management policies need to be revised. Ramachandra and his colleagues, who had extensively studied the swamps of Uttara Kannada district of Karnataka, suggest providing incentives to farmers and other forest dwellers of the Western Ghats in the form of carbon credits for their role in promoting and guarding watershed vegetation. Such programs will uplift their livelihoods whilst also salvaging these ancient forests.

“The innumerable stream courses of Western Ghats offer tremendous potential for carbon stocking per unit area while also ensures water security for the entire Indian peninsula by bettering the hydrology of the Western Ghats mountains, which form the main watershed,” states Ramachandra.

He said: “The respective biodiversity boards (in the State), as well as National Biodiversity Authority, should come up with the appropriate conservation measures” such as attaching a heritage tag to the swamps. “This should be managed by the respective Village Forest Committees with the active participation of all stakeholders,” he added.

A 2007 report on the Myristica swamps of Kerala suggested demarcating all the swamp areas in Kerala as an “individual protected area in its own right.” Among other measures, it also proposed regulating the cutting of entire branches for aril collection.

Some signs of hope emerge for the swamp patches in Karnataka. Earlier this year, it was reported that the swamps of Kathalekan in the Uttara Kannada district are set to receive the status of a sanctuary under which they would be protected.

Ramachandra stresses the need for awareness programs among youth (school and college students) about the importance of Myristica swamps, which will empower them to conserve these fragile ecosystems.

Robin Abraham of the University of Kansas, who studied the breeding behaviour of an endemic treefrog from Kerala’s swamps, says: “The need of the hour is more manpower and diverse talent to explore and share information on the natural world in more detail, so as at least to be empowered to make sensible decisions and interventions.”

Saving the swamps will pave the way for researchers to unravel the secret lives of the flora and fauna inhabiting these enigmatic, archaic ecosystems—and in the process perhaps yield vital clues as to how life evolved in the Western Ghats in the face of a changing climate over thousands of millennia.

Banner image: A view of the tree canopy inside Myristica swamps. Photo by Pradeep Hegde.