While scientists, bureaucrats and politicians are making policy around fisheries, are the voices of the fishing communities represented? by Bhanu Sridharan on 2 December 2019

The fishermen of the Thoothoor region in Kanyakumari district of Tamil Nadu are renowned for their bold sea-faring journeys and their ability to catch large, deep-sea species, such as sharks, tuna and marlin. Government reports and news stories often highlight their special deep-sea fishing skills.

But these fishermen say the government doesn’t consult them enough when drafting policies and regulations around marine resource management. As a result, they say they’re faced with the choice of following laws they believe are unrealistic or risk losing their livelihoods.

“We [fishing community] are not represented anywhere. We are not there in the legislative assembly. We are not there in the parliament or even in official departments,” said Jose Bilbin, the president of the Thoothoor Fishermen’s Cooperative Society. If the government is truly serious about protecting fragile marine species like sharks and safeguarding fisher communities, Jose believes that the voices of communities like Thoothoor must be heard before marine conservation laws are passed.

Read more: Can a village specialised in shark fishing have lessons for India’s fisheries?

A history of neglect

India’s marine fisheries are managed by a complex network of ministries and government agencies. The Ministry of Environment, Forest and Climate Change (MoEFCC) creates marine protected areas, formulates legislation for protecting marine wildlife and decides which international conservation agreements to ratify, such as the CITES agreements. The Ministry of Fisheries (or Department of Fisheries) (or Department of Animal Husbandry, Dairying, and Fisheries) decides which fisheries to promote, which species can be fished for export and regulates the types of boats and equipment and the amount of compensation fishing communities can get when natural disasters, like cyclones, strike.

In most cases, these decisions are made by scientists, bureaucrats, and politicians with no fishing background, Jose says. In 2001, the Wildlife Trust of India, a conservation NGO, started a campaign to protect whale sharks from fishing along the Gujarat coast, the only place in India where this critically endangered species was known to be present in substantial numbers. The campaign was largely successful in convincing Parliament to protect the species under the Wildlife Protection Act and even received support from the National Fishworkers Forum and fishing communities in Gujarat.

Months later, the environment ministry amended the Wildlife Protection Act to include not just whale sharks but all sharks, thereby criminalising all shark fisheries in the country. Yet no fishing communities were consulted. Vincent Jain, head of the Association for Deep Sea Going Artisanal Fishermen (Deep Sea Fishing Association), an organisation created to advocate for the rights of Thoothoor’s shark fishermen, led fishermen to Delhi to protest the ban.

The government eventually relented and removed the total ban. Now, 10 species of sharks and rays, including the whale shark, are included in the Wildlife Protection Act.

Jain explains that Thoothoor’s fishermen are not against shark conservation. In 2008, the Department of Fisheries tasked the intergovernmental Bay of Bengal Programme (BoBP) with creating a National Plan of Action (NPOA) for conserving shark populations in India in accordance with guidelines from the Food and Agricultural Organization. Six years later, the Association decided to help the BoBP organise consultations with fishing communities across India.

The Association took matters in its own hands, starting what they called a National Mission Meeting on Conservation of Sharks -India. The mission involved a series of consultations with local fishing unions, scientists and government agencies between 2014 and 2015 in every coastal state of India. Consultations were held with conservation organisations such as TRAFFIC India, animal rights organisations like the Humane Society of India, and government organisations like the Central Marine Fisheries Research Institute (CMFRI). Officials from the environment ministry and independent researchers also joined the meetings in different states.

The idea was simple: Make sure shark fishing communities had a voice in determining a plan for shark conservation. In December 2015, after a year of meetings organised by the Deep Sea Fishing Association, the BoBP submitted a draft of the National Plan of Action to the Fisheries Ministry (then the Department of Fisheries under the Agriculture Ministry). Four years after submission the draft plan has yet to be approved.

Read more: Where is India’s National Plan of Action for shark fisheries?

Jain said the Association has been closely involved in the consultations but based on his experience of how policies are drafted in India, he is not very hopeful their input will make much difference. “The bureaucrats never consider our suggestions,” he said.

Yugraj Yadava, the BoBP director, however, had a different view. “They were, in fact, equal partners in the preparation or rather the stakeholder consultations,” he said. Yadava noted that the association had raised three key concerns while providing feedback on the NPOA.

“I think their main comments were with the livelihood options because the fishermen have been catching sharks for generations. And now all of a sudden, if they are asked not to, what do they do with their livelihoods?” he said. Yadava also noted that the association stressed that there needed to be more efforts to create awareness on shark conservation laws and a better way to identify species that were banned. “And those comments have been incorporated into the revised version, which is with us,” he added.

Jain’s cynicism, however, is not entirely without merit. In February 2015, even as the association was holding consultations for the national plan of action, the Ministry of Commerce issued a circular banning the import or export of shark fins. As before, the fishing community, traders and exporters were not consulted or even warned. Even the BoBP, which had not yet submitted a draft plan of action, did not know about it, Yadava said.

“If you can’t export fins, sharks are not as profitable … They are pushing these rules stealthily,” said Jose. “When it is a matter that affects fishermen the Government of India should be consulting us.”

The fact that shark fins are driving demand for shark fishing is one reason Yadava and other conservation-focused organisations agree with the ban since shark finning is a threat to the species.

“The fisheries sector in India is exploitative, there are no limits or checks and balances in place,” said Merwyn Fernandes, a coordinator at TRAFFIC India, an NGO that monitors the illegal wildlife trade. “Hence, the shark fin export ban along with the naturally attached fin policy had come at the opportune time,” he added.

Shekhar Kumar Niraj, an Indian Forest Service officer and former head of TRAFFIC India, concurred with Fernandes, saying the move was justified because of the “rampant finning that was going on in the country.”

Shark finning is the practice of cutting fins off sharks, often while they are still alive, and throwing the shark back into the sea. Finning was banned in 2013 – though it is generally agreed that this practice is not so prevalent in India, where the whole shark is landed and used. At the time, the Deep Sea Fishing Association supported the ban on finning and continues to do so.

The 2015 ban on the fin trade still allows sharks to be fished but bans the export of their fins. That matters because while fins can technically be sold in India, there is no market for them – to Jose’s point about profits.

Jain explained that the problem was not with banning fin exports, but the fact that fishers and traders were not given time to adapt to the ban. If the government had given the fishing community a year’s notice to adapt to the new trade policy, they would have had time to switch to other types of fishing without undergoing a loss, according to Jain.

The ban has also not led to a complete halt in fin exports from India. Since sharks can still be fished, there appears to be a ready supply of fins available that make their way into the illegal export trade, noted Jain.

When fishing communities are not taken into confidence and given the time and resources to adjust to new rules, the illegal fin trade would continue, he asserted.

The Wildlife Crime Control Bureau (WCCB), the government agency in charge of curbing the illegal wildlife trade, claims there has been no increase in illegal exports since the ban, with only three cases detected after it was put into place in 2015, said T. Uma, the Regional Deputy Director of WCCB’s southern branch in Chennai.

Moreover, she didn’t think there were any major challenges in detecting shark fins for export, with well-trained intelligence officers being able to uncover such attempts. But Fernandes from TRAFFIC says they are extremely challenging to track.

“There are hundreds of landing sites where fishermen bring their catch. It is extremely difficult for any agency to check what is being brought,” he said. “Further, the export of products takes place from several places/ports, and exporters often use ports most unsuspected by law enforcement agencies.” 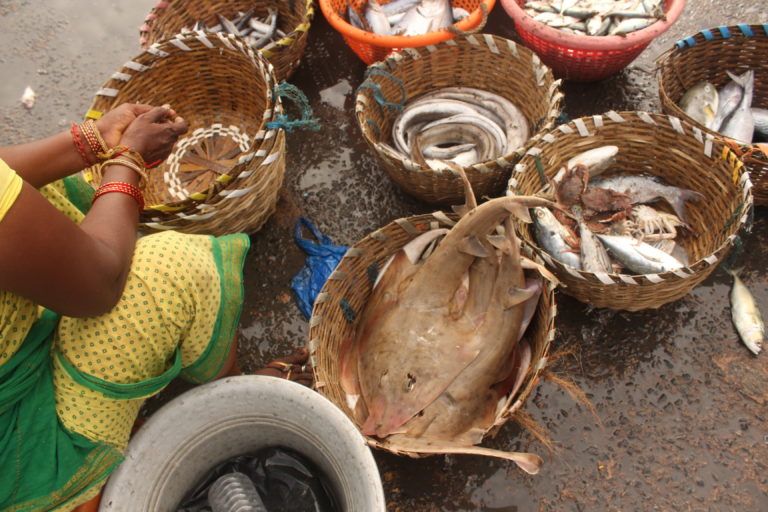 Who are laws made for?

Despite supporting some conservation measures, shark fishermen in Thoothoor are critical of laws like the Wildlife Protection Act, which prohibits the fishing of 10 species of sharks and rays. But the challenge, fishermen say, is avoiding these 10 species while fishing for others at sea.

“Nobody dives into the sea and catches a shark,” said Jose. “Hunting is different. They will see an animal and shoot it. But that’s not how we do it. We put out thousands of hooks. And all the fish will be dead by the time [they] come on the boat. Live fish can be released. But to release a dead fish is bad for the sea and for our livelihoods. But if you tell this to the government, they don’t understand it,” Jose rued.

Divya Karnad, a marine biologist and assistant professor at the Ashoka University points out that this species-centric approach of the Wildlife Protection Act had worked for large and visible species, such as whale sharks. As whale sharks come to the surface of the water to feed on plankton, Karnad pointed out, they are easy to spot and can be released if they are caught in nets.

With most other sharks, however, the fishers have no way of knowing which species will be caught and punishments would thus be unfair, she surmised.

“It doesn’t bode well in terms of a conservation strategy or in terms of trying to get fishermen themselves involved in wanting to save sharks,” Karnad said.

Although Niraj and Yadava felt the laws act as important deterrents, they agreed that not enough effort had been made to engage with fishing communities before taking legislative action.

“One of the biggest problems is that these documents don’t reach the last mile. And they are in English,” Yadava said.

Yadava said that the BoBP had made suggestions in the draft National Plan of Action that there should be simplified versions of laws in regional languages that people from the fishing community could easily read. “So that they’re aware of the law and the requirements of conservation.”

“Awareness also includes taking people into confidence and making them also part of the policy development exercise,” said Niraj. “Sometimes arriving at a common decision becomes difficult, but nonetheless, you have to take them [fishing communities] on board because of the huge stake that they have.”

[This story was produced with support from the Internews’ Earth Journalism Network Bay of Bengal Story Grants.]