Youth rising at COP25: They came, they protested, they negotiated

by Kartik Chandramouli on 19 December 2019

The recently-concluded climate change summit in Madrid, COP25, didn’t live up to its tagline of “Time for Action” for vulnerable nations, indigenous people and especially, the youth. Young people who had come from all over the world demanded, explained and negotiated for urgent climate action over the two weeks of the event. However, participating countries failed to raise their pledges to reduce greenhouse gas emissions and provide financial support to developing or poor countries, among many other setbacks.

At the final plenary session, of what became the longest-running climate summit in 25 years, the representatives of the official youth constituency of the conference expressed their disappointment to leaders and officials. They said, “Do you want to be remembered as the ones who had the chance to act but decided not to as betrayers of our generation, of indigenous people and communities desperately fighting on the ground? We are rising, we are fighting and we will win.”

At the opening ceremony of the climate conference, United Nations Secretary-General António Guterres hoping to motivate the delegates, said, “Do we really want to be remembered as the generation that buried its head in the sand, that fiddled while the planet burned?” But evidently, his remarks didn’t inspire the decision makers enough. Guterres, who has repeatedly shown his support for youth movements and urged them to keep up the pressure on leaders, added, “Millions throughout the world – especially young people – are calling on leaders from all sectors to do more, much more, to address the climate emergency we face.”

World leaders and delegates came together at the annual climate conference to negotiate and decide on ways to cut their county’s carbon emissions to retain the global temperature below 2 degrees Celsius, as agreed upon at the Paris climate conference in 2015 and reduce the impact of climate change. The average global temperature has now increased by 1.1 degrees Celsius and the rise shows no signs of stopping.

Half a million people, mostly youth, participated in the climate strikes in Madrid during the first week of COP25. Video by Allan Jay Quesada.

“We are desperate for any sign of hope,” said Greta Thunberg, the 16-year-old Swedish activist at one of her many speeches at COP25. Recently named the Time Person of The Year, the young activist has inspired youth across the world to join and organise climate strikes, where children skip school to protest against inaction by governments on climate change. The movement started with Greta’s decision to skip school in August 2018 and protest outside the Swedish parliament demanding climate action. This was the first COP after the climate strikes became a global phenomenon, resulting in terms such as ‘climate emergency’ and ‘climate action’ gaining public awareness. And the event that ran from December 2-15 witnessed the action from youth who travelled across the planet to make their voices heard.

While many of the youth in Madrid this December joined the half-a-million people on a climate march in the Spanish capital, some were representing their nations inside the negotiation rooms. The youth spoke at events, press conferences and shared the stage with officials and scientists.

Licypriya Kangujam (8) from India in her feisty speech urging political leaders and policy-makers to act on the climate crisis said, “I’m fighting for my future. Losing my future is not like losing an election or losing a few points on the stock market. I’m here to speak for my generation and all the generations to come.” Young activists even stormed the stage after a plenary meeting voicing their concerns with slogans – “What do we want? Climate justice. When do we want it? Now!”

Fridays for future take over the COP! #COP25 pic.twitter.com/wkyG18ld3G

From the streets to the negotiating table, youth participation steps up at COP25

On the streets of Madrid, the youth protested to voice their concerns about climate inactions that affect the entire world. Nicole, a youth activist from Chile who was at the strike, said, “It is very important for me to be here because of what is happening in Chile. I’m marching here too because we understand that climate justice is social justice.” COP25 was initially planned in Chile but was canceled due to large-scale public protests against social inequality.

Jannis Gustke (26) from Germany, who attended the COP with a German environmental group called Naturfreundejugend, also came to the climate march to show his support. “Storming coal mines and the streets are necessary, but I also realise that it is essential to visit COPs and lobby for your cause,” he told Mongabay-India, standing amidst half a million protestors.

The youth were present as well in the negotiating rooms. Angelique Pouponneau (29), a professional lawyer from Seychelles was part of the 10-member delegation representing the island country. And she was one of the four in the group that negotiated on technical aspects of loss and damage and climate change adaptation. “This has always been my area of interest because it is so relevant when you live on a small island and you see 80% mortality of coral reefs, you see a lesser supply of fish, you see things happening every day. And all of this is closely linked to loss and damage,” she said.

She feels that the pressure due to the youth movement has not directly affected the negotiations but at least the sidelines. “The voices have made delegations feel that they need to be including youth within their official delegations, which some countries like the Marshall Islands have been doing for a very long time,” she added. The Nordic nations sent a team of five young Nordics to discuss expectations with their ministers and also share daily reports back to their country.

One of the aims of the COP25 was to urge countries to raise their voluntary ambitions called Nationally Determined Contributions (NDCs) to tackle climate change. While the summit did not succeed at this task, the youth emphasised their point to involve them while planning and drafting NDCs.

Chiagozie Udeh (25), a climate activist from Nigeria and a member of YOUNGO, the official youth and children constituency on climate change processes, feels that there should be a formal method to involve youth in framing NDCs at a national level. “I love the fact that a lot of youth action happened in this COP and there were specific demands on things like gender and health. But now, more strategic engagement is needed to transfer the energy on paper. But yes, the process can be slow,” he said.

Similar demands were raised at a high-level event by the United Nations Children’s Fund (UNICEF) and the Office of the United Nations High Commissioner for Human Rights (OHCHR) along with YOUNGO and other youth activists. They urged countries to sign a declaration and commit to making their NDCs inclusive of children and also have measures to enhance youth participation in decision-making.

“The climate crisis is a child rights crisis. One in four children are living in areas of high water stress, they are worst affected by disasters, air pollution, water-borne diseases, food scarcity,” Gautam Narasimhan, a senior adviser on climate change, energy, and environment at UNICEF, told Mongabay-India in an interview. “There are a lot of cases that show youth involvement is helpful… Nepal has disaster plans made in consultation with children. Member states should not just see them as victims but also use them as agents of change,” he added. According to Narasimhan, nine countries had signed the declaration at the time of the interview.

Sara Cognuck (24) from Costa Rica, who worked on developing the youth-led declaration, has been a climate activist since she was 15. She has been participating in public and official platforms in the country that discussed issues about youth and the environment. She was at COP to bridge the “huge gap between what happens in reality and what happens in these spaces (COP).” Cognuck said, “We need more youth activists and we need more people youth in the decision-making spaces.”

Numerous speeches and press conferences at the climate talks had references and praises for the youth movement. At her first major press conference after arriving in Madrid, Greta told journalists, “We have been on strike for a year and still basically nothing has happened. Climate crisis is ignored by those in power and it is not a sustainable solution that children skip school. We can’t go on like that.”

Vanessa Nakate (22), a climate striker from Uganda who shared the stage with Greta and other activists from Spain, boldly stated, “We are tired of the praises that you keep giving activists. We don’t want the praises, we want action.”

In the last few days of the COP, youth activists from Fridays For Future and Extinction Rebellion organised a strike outside the venue to highlight the lack of progress at the ongoing event. Several young participants of the COP joined in as slogans of “we are watching” were visually amplified by raised palms with eyes sketched on them. Speaking to Mongabay-India while taking a break from the high-volume strike, Scarlet, a young climate activist from Romania, said, “You may call this dramatic. But we have no other option but to keep at it. We can keep adding pressure on governments and corporates to bring some change.” She also spoke at an event inside COP and got a meeting with a Romanian minister to discuss the state of single-use plastics in her country.

Chiagozie, Sara and Angelique, and several youth activists, no matter which country they are from, believe that the energy from the streets does not penetrate the walls of the meeting rooms. “In my humble personal opinion, you won’t hear a negotiator say they’re waiting for us outside on the streets to take decisive action on this,” said Angelique. “I love coming out of the subway and seeing all the protests and I am inspired by it. But once you get into the negotiations, that doesn’t matter. It is economics.”

But for many, even if part of the system, the global youth movement signifies change. Mizan Khan, a climate expert from Bangladesh who has been a negotiator at climate conferences for 15 years, said at an event, “I’m tired. We are just losing time. We need and welcome more Gretas. That’s what we need…Promotion of collective action.” 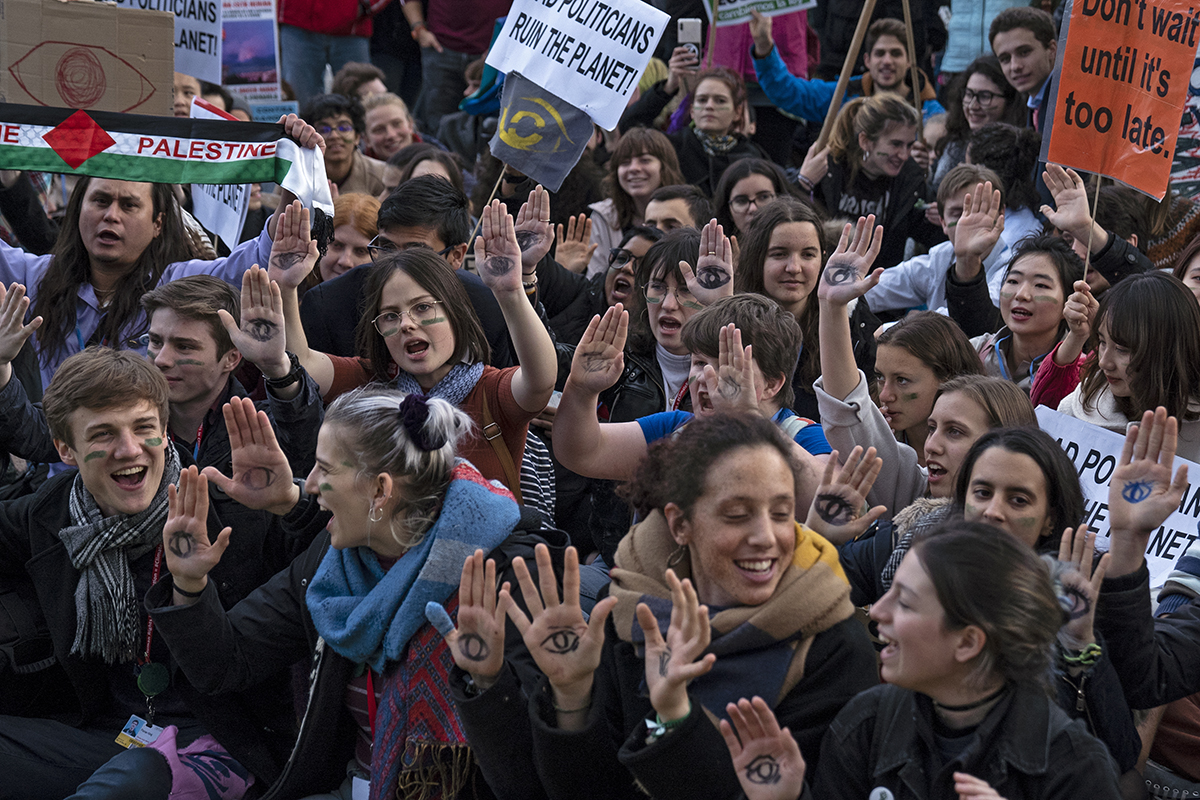 Young climate activists from Friday For Future and Extinction Rebellion at a strike outside the COP25 venue in Madrid. Photo by Kartik Chandramouli/Mongabay.