Faith and healing in the sacred groves of Madhya Pradesh

At least twice, the staid kalam tree (Mitragyna parvifolia), standing tall on a mound surrounded by farms in a nondescript village in the hilly areas of western Madhya Pradesh has granted his wishes, says local resident Devala Pal.

He says once it pulled out a relative from a coma and the other time it helped him with an issue pertaining to his agricultural land in his native village Kallipura in MP’s Jhabua district.

Pal belongs to the Pateliya community, one of the three principal tribes in Jhabua district in the central Indian state which has the country’s largest forest cover. These tribes or adivasi, including the Bhil and Bhilala, revere and protect these trees which are part of ‘sacred groves’ — thickets of trees where specific species are worshipped and conserved in alignment with beliefs.

As gratitude for fulfilling his wishes, Pal executed an elaborate and costly ritual offering to the tree. He says it can be almost as expensive as a wedding typical in his community. Animal sacrifices and offerings of country liquor are common in this fest where the whole community feasts and indulges in socio-cultural events, explained Pal.

“Our deity kalamdeo resides in the kalam trees and we especially approach the deity for wish fulfillments. At one instance I had sacrificed 35 chicken and two goats. We protect the tree and it protects us,” said Pal, alluding to the kalam patch surrounded by swaying wheat fields that were once lush forests. The 2019 Forest Survey of India assessment reports a seven square km decline in Jhabua’s forest cover with respect to the 2017 report. Only six percent of Jhabua’s 3600 square kilometre area is forested in the assessment.

“It is difficult to find kalam now that the forests are gone. A cement factory has swallowed up one of these sacred trees in the neighbourhood. We as a community don’t lay a finger on the tree for personal use. An exception is made for our rituals; sometimes we use barks and branches for our rituals but nothing beyond that,” said Pal.

The home of the deity

A stone’s throw away from the kalam grove is a raised platform surrounded by palash (Butea monosperma) and sturdy segwan or teak (Tectona grandis) trees. Pal says this is the seat of the deity sawanmata. Heaps of clay horses and urns — signs of worship — lay on the platform. The platform also seats a small temple-like structure that locals say is dedicated to a Hindu deity.

In another of Jhabua district’s villages, Khairmal, silver tinsel loosely streaks around a grove of hardy Indian redwood or royan (Soymida febrifuga), palash and the pale barks of the ghost tree (Sterculia urens). Clay horses and urns again mark the spot of offerings and worship. A piece of paper sticks out amid the horses.

Padam Waghela, a Bhil, carefully extricates the piece of paper that turns out to be an invitation letter to a community event.

“If we have events and social functions the deity is the first to receive the invitation,” Waghela says tracing the swathe around the grove that no one from the community can dare violate. “No one can harm the trees in which the deity resides. It brings bad luck and diseases,” he warns citing several taboos.

“A couple of times, we caught certain members of the community who tried to chop off branches and sneak out. They were punished. Children may sometimes break a bough or two in play but they know the importance of these trees and don’t damage them,” Waghela explained. Life, disease and death are all intricately woven with these sacred trees.

It is this cultural connection with the sacred groves and their trees that have saved these unfenced and open thickets from the clutches of deforestation driven by illegal felling of trees for timber, encroachment and religious interventions, experts and activists said.

“The belief system of the adivasi communities, particularly the Bhils, has played a crucial role in the in-situ conservation of natural forest patches as they obey unwritten laws of their belief system and share a collective responsibility towards their protection and maintenance,” said Sameeta Rajora, an Indian Forest Service officer who was earlier posted in Jhabua and has documented the district’s sacred groves.

Rajora noted that the largest and oldest trees of the district are in those groves reflecting the dry deciduous forests of the region. Some of the rare, endangered and threatened species of Jhabua such as the ghost tree, Indian kino and Dalbergia species occur in these groves.

“Some groves present a picture of the past glory that the forests in that area may have enjoyed. These trees are indicators of the best adaptability and resilience of a species in the locality,” added Rajora.

While the Khairmal sacred grove is located in forestland, Kallipura is on revenue land. “Irrespective of the land classification, encroachment and population pressure, the groves have survived only because of the adivasi belief and culture,” she asserted, adding that sacred forest patches should not be fenced.

“They believe that their deity resides in the open and hence, fencing of the patches or erection of structures is not part of their belief system,” said Rajora. “However, there is a need felt for demarcation and fencing of these groves to save them from grazing pressures and facilitate regeneration in the understorey to maintain its vegetational structure.”

In the neighbouring district of Alirajpur, that was part of Jhabua until 2008, activist Shankar Tadwal laments the slow and steady erosion of tribal identity and culture in the younger generation that is also a contributing factor in the clearing of forests.

“Over the years, temples began to be built around our deities area of residence (sacred groves) and many in our communities embraced other religious identities and started following gurus and babajis. They were led to believe that their cultural beliefs that centred on protecting nature were superstitions. Soon enough these trees began to disappear and there were factories in their place,” Tadwal said, adding the nexus between politicians and local contractors led to large scale felling of trees.

Tribal communities fight for their rights over forests they nurture

Tadwal and his peers have demanded that the incumbent Congress regime in the state execute the Scheduled Tribes and Other Traditional Forest Dwellers (Recognition of Forest Rights) Act, 2006, without delay and grant them community rights over their forests. The Act recognises community forest resource rights (CFR) over common amenities and sites of cultural, religious or other significance, and the right to protect, conserve, regenerate and manage their community forest resources for sustainable use.

“Conserving forests is essential to the longevity of our culture and heritage. But we, adivasis, who have been nurturing forests, are now battling hard for our rights over our own land,” said Tadwal, who belongs to the Bhilala tribe.

He added: “It was the Congress which introduced the concept of ownership of land for forest dwellers by passing the Act in 2006 and now the party is in power in Madhya Pradesh. It must settle our CFR claims now.”

According to Benedict Damor of Jhabua-based Adivasi Chetna Sikhshan Seva Samiti, there is limited awareness among the tribal community about the various claims under the Act. “Some CFR claims have been settled on paper but the people don’t care much because they keep going to the spots they consider sacred anyway.”

“The real culprit is the forest department,” alleged Damor referring to the illegal tree felling. He acknowledged that a section of the unemployed tribal community is also lured into abetting the illegal logging for livelihood.

The trees that heal

Bheem Singh, a healer of the Bhil tribe, who has meticulously documented the medicinal plants that once abounded in the forest, believes tapping into the herbal medicine market can be a source of livelihood for the youth.

He recalled how the monsoon rains used to transform the dry and dusty patches around the sacred trees into lush green undergrowth of herbs, which have slowly dwindled in diversity and numbers with shrinking forests, a fact also corroborated by Benedict Damor.

Even now one can spot shrivelled up tulsi plants beneath the protective canopy of big, old trees. “You won’t be able to walk through the stretch in the rainy season; they will be flush with herbs,” informed Padam Waghela deftly darting through the scrubs and shrivelled herbs in Khairmal in Jhabua.

In a study, researchers documented the rich floristic diversity of a sacred grove in Alirajpur (locally known as the Ishwar Baba sacred grove) with 144 plants belonging to 57 families and 134 genera. Majority of the species used are herbs (50 percent) followed by trees (22.91 percent), climbers, shrubs, grasses and epiphytes. The study recognises overexploitation and loss of habitat as the main threats to the herbs.

Bheem Singh, who also cultivates and conserves some of the rare herbs in his homestead, points to the forest department’s plantation strategies as another threat. “In some places, they have put fences to protect forest patches and plantations. But it hinders access to the medicinal plants. The jungle people (forest department) also encourage plantation of species that may not be of use to us,” Singh said.

Countering Singh’s view, F. Jaysingh who is in charge of Jhabua forest department’s nursery said it is difficult to get a section of the agricultural community to plant and care for the trees without incentivising the exercise.

“While they definitely don’t harm their sacred trees, a section of them are equally reluctant to plant saplings, look after them and monitor their growth. We prepare and distribute rare, endangered and threatened (RET) species that include certain medicinal plants also. They usually want plants that will bear fruits and other products so that they can derive some financial benefit out of them,” Jaysingh said.

“As far as medicinal plants go, their awareness on how to harness them is very low,” said Jaysingh, informing that the forest department in Jhabua saw a measure of success when the communities were paid Rs. 25 to plant a sapling and look after them under the Krishi Samriddhi Scheme of the Madhya Pradesh government initiated in 2013-2014 and concluding in 2019.

Bheem Singh concedes that though they have the traditional understanding of what herbs are suited for which disease, their know-how on tapping into medicinal plants to turn them into products for modern-day therapeutic use is low, which is why he and his peers, as well as their juniors, have undergone several training workshops in that direction.

“We need specialists and guidelines framed by them in consultation with the tribal community to galvanise the potential of the medicinal plant industry. We don’t see much effort in this direction,” Damor added.

But Damor is hopeful about the future. “The tribal youth across the country have started talking about preserving their culture, including nature conservation. They are talking in earnest about the protection of tribal interests through the implementation of the Constitutional tools such as the Fifth Schedule and Sixth Schedule [which make provisions] for the administration of scheduled areas that have tribal autonomy.” 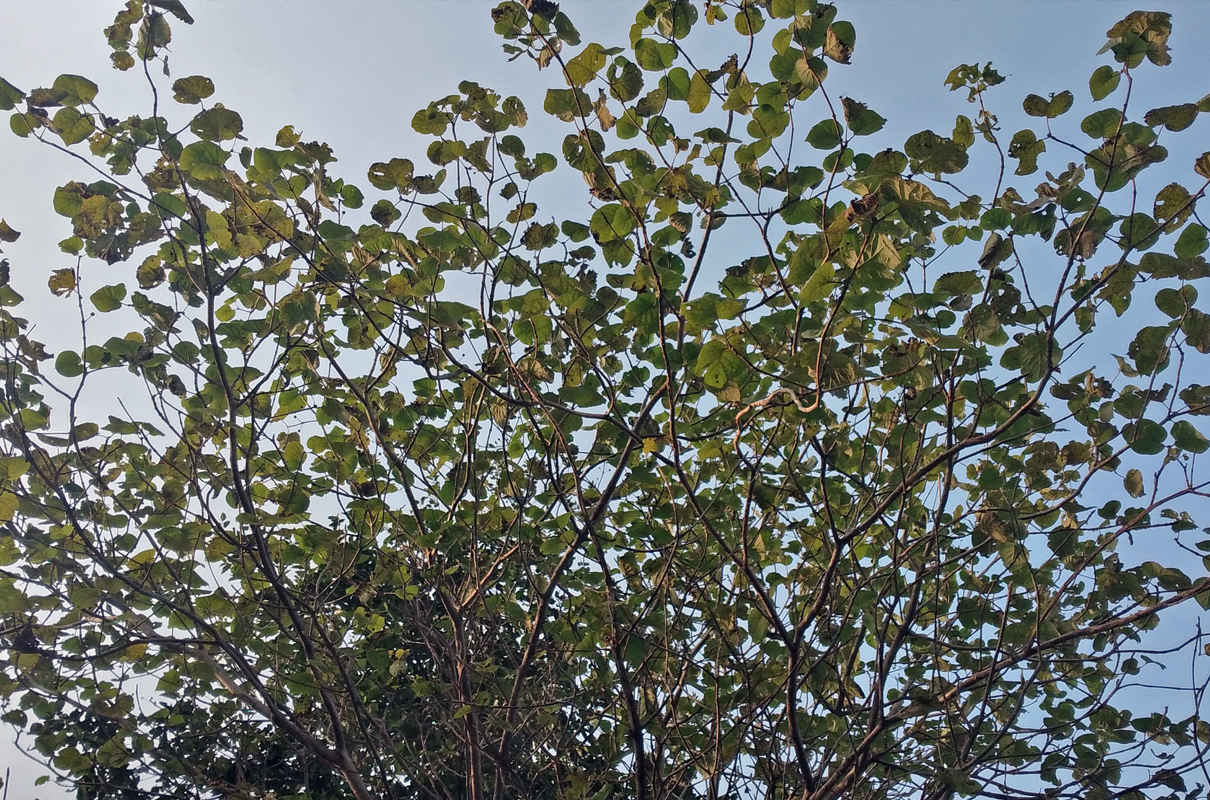 The canopy of a kalam tree in the sacred groves of Jhabua. Photo by Sahana Ghosh/Mongabay.

Read more about sacred groves in Jharkhand and Kerala.

Banner image: Devala Pal from the Pateliya tribal community stands amidst a sacred grove with kalam and other species of trees. Photo by Sahana Ghosh/Mongabay.