The futility of the teak forest in Kandhamal

With a yellow towel wrapped around his shoulders, Ganesh Majhi, 54, of Deogada village, in Belghar gram panchayat of Odisha’s Kandhamal district, is angry about the teak trees in the forest near his village, planted by forest department officials. “They spoilt our rich forest by planting teak trees. We don’t get the things from the forest that we used to get earlier,” he vented.

Ganesh Majhi is from Kutia Kondh tribe, listed as a particularly vulnerable tribal group (PVTG), living in the hilly region of Belghar under Kandhamal’s Tumudibandh block of Baliguda sub-division. Majhi and the rest of his community inhabiting the region are unhappy with the teak plantation drive carried out by the forest department in their forest and in the land marked for shifting cultivation. “This is an invasion by the state government and its forest department on our traditional sources of livelihood,” Sinde Majhi, 80, of Deogada, said. Expressing his anger, he added, “Only they (forest department people) can say what benefit these teak plants bring to the land and the forest they are planted in.”

Due to its high-value timber, teak (Tectona grandis) is the world’s most cultivated high-grade tropical heartwood, covering approximately 6.0 million hectares worldwide. Of this, about 94 percent is in tropical Asia, with India (44 percent) and Indonesia (31 percent) contributing to the bulk of the resource. In the present market scenario, one cubic foot of ready-to-use Indian teak wood from a 7-9 year old tree costs between Rs. 4000 and 6000 in India. The costs are proportional to the age and girth or circumference of the tree. The higher the age and girth, the more its wood costs.

Since the first teak plantation by the British in Kerala’s Nilambur forests in 1842, the teak trees have invaded almost all Indian forests to fulfill the purpose, as often cited, of enriching the forests. Almost all states of India have carried out teak plantation in the forests under different schemes to create or convert the existing forests into high-value timber-based forests.

The most important teak forests in India are in Madhya Pradesh, Maharashtra, Karnataka, Tamil Nadu, Kerala, Uttar Pradesh, Gujarat, Odisha and Rajasthan. The tree is also planted in forests of Haryana, West Bengal, Assam, Meghalaya, and Dadra and Nagar Haveli.

In Odisha, the government promoted teak plantations have come up in most of the state’s forests and the adjacent hill slopes used by local tribal communities for the cultivation of multiple crops.

The district of Kandhamal, has the highest forest cover in Odisha spanning 5397.01 square kilometers, covering 65 percent of the district’s geographical area, as per India state of forest report 2019. It has seen large scale teak plantation too.

In 2009 and 2010, the (forest) department introduced joint forest management plantations on buffering forest and customary land cultivated by the Kutia Kondh communities of Belghar.

Against rights and livelihood

“In 2009, they (forest department people) planted (teak) trees on forest land and, also, on the land we used for growing crops including indigenous upland paddy, flaxseed, millets, legumes, black gram, tubers, leaves, etc. Even though we had shown the individual forest right (IFR) title papers obtained under the Forest Rights Act (FRA) of 2006, nobody gave any heed to our requests to stop plantation in the land patches marked for cultivation,” Balakrushna Jani, 45, of Burlubaru village said. “Instead they (forest department officials) asked us whether the forest and forest land were our paternal property.”

Disrespecting the established community norm and the title papers given by the government under FRA, forest department carried out teak plantation on the land of tribal people recognised under FRA, the community alleged.

Despite the recognition of community rights of many Kutia Kondh villages to use the forest resources, the community is neither aware of the provisions of the Act nor does the forest department honour their legal rights, said Sunaram Murmu, an anthropology student involved with Odisha’s SC ST Research and Training Institute as a resource person and associated with Vasundhara NGO.

As the whole of Belghar gram panchayat is a hilly forested area, there is not enough plain land where the Kutia Kondh tribal people can farm. They have been using the hilly land since generations to grow crops for subsistence. “If the forest department occupied the land for plantation of teak trees, where will we grow crops? What shall we eat? How are we going to survive?” – asked Ananda Majhi, 46, of Kadapana village.

Belghar is the only gram panchayat in Kandhamal district to have Kutia Kondh, which is an agrarian tribal community. They use low hill slopes for agriculture and depend on the forest for their livelihood. “Anything hampering their land or forest would threaten their livelihood and survival,” Renudhar Naik, special officer at Kutia Kondh Development Agency, Belghar, emphasised.

Finding no other way to ensure the survival of her family, Rajkumari Majhi of Burlubaru had to clear the teak plants to grow crops. “We are in deep trouble since teak plantations have come up on our lands where we grow maize, beans, Kating (an indigenous dal seed), black gram, finger millet, little millet, for our survival. As we have no land to grow crops, I had no other way but to cut the teak trees and reclaim the land for agriculture.”

While many of the tribal people have lost their land to teak plantations in Belghar area, clearing trees to free the land for agricultural use is neither easy nor does it bring an end to the problems Kutia Kondhs face due to them. “We are repeatedly threatened by the forest department employees that we will be arrested if we cut teak trees planted on our land,” Jamuna Majhi, 28, of Kadapana village said. “Local forest department staffs ask us to seek permission from departmental authorities to cut teak trees from their land.”

According to botanist Hemant Kumar Sahoo of Vasundhara, a non-profit working on rights of tribal people, biodiversity conservation and sustainable livelihood, the plantation didn’t only isolate the Kutia Kondhs from their land but also disrupted the ecosystem services the sal (Shorea robusta) based forest of the region used to provide to the tribal people.

Like the land used for agriculture, natural forest bears equal importance as a source of livelihood for these tribals. “We were collecting firewood, mahua flowers and seeds, siali (Bauhinia vahlii) and sal leaves to make leaf plates, sal seeds for oil extraction, the resin for its cultural importance as an aromatic agent, fruits, berries, medicines, tubers, honey, wild mushrooms and leaves from the forest,” Jayanti Majhi, 38, of Deogada village recalled. “Now there is no forest but only teak trees in parts of the forest where plantations are promoted.”

About the reasons behind such degradation of the sal based natural forest after teak plantation, botanist Sahoo explained, “Teak is like a weed tree. By virtue of its rooting structure that spreads horizontally in the topsoil layer, this species consumes most of the soil nutrients and moisture to ensure its survival and doesn’t allow other plant species to grow around and under it. It even becomes difficult for seeds of other plants to germinate because of moisture and nutrient scarcity.”

A moderate to slow-growing plant, sal regenerates from seed origin or by coppicing or by sprouting from root suckers. It’s a light-demanding species requiring complete overhead light from the earliest stages of its development. While wide canopy gap in a forest helps regeneration and growth of understorey seedlings and saplings, relatively quick growing teak trees hinder the process for sal and associated plant species by reducing the canopy gap after some growth and blocking sunray from reaching the soil surface. The survival rate of teak is also higher than other plant species that grow in a natural forest, Botanist Sahoo said. “So, as an obvious consequence, the natural forest is bound to degrade and become deficient to deliver the expected ecosystem services.”

Trees, creepers, and shrubs in the teak plantation area disappeared gradually and it became useless for local people and wildlife, observed Ganesh Chandra Majhi, 45, of Tidipadar village. “The forest department may get high-value timber from teak trees, but by destroying the natural forest, it deprived us of all forest-based food and livelihood opportunities,” he said.

Kailash Chandra Dandapat of Jagruti, a non-profit working on forest rights and biodiversity conservation, observed that it also breached the cultural connection between indigenous people and the forest. “Tribal people of the area worship the forest, specific trees and medicinal plants on different occasions. They also get everything they require to perform family as well as community rituals. So, natural forests have been integral to the socio-cultural life of tribal people.”

Showing a plant of Solanum family, the Kutia Kondhs call ‘Tutunaka’, Balakrushna said, “We use the fruit of this plant whenever we have headache or stomachache. We depend on the forest for our medicines and they were in plenty in this forest before teak plantation.”

Forest is a part of Kutia Kondhs. “We worship the plants used for making plough and other agricultural tools. The siali leaves that grow in forest are used in every ritual on which we offer rice and other food items to our gods. Amla or Indian gooseberry is a medicinal plant and it supports our livelihood because of its commercial value. Teak trees killed them all. It doesn’t even allow grass to grow on the soil where our cattle animals could graze,” Ganesh Chandra Majhi of Tidipadar said while showing a few plants in the nearby forest free from teak plantation. 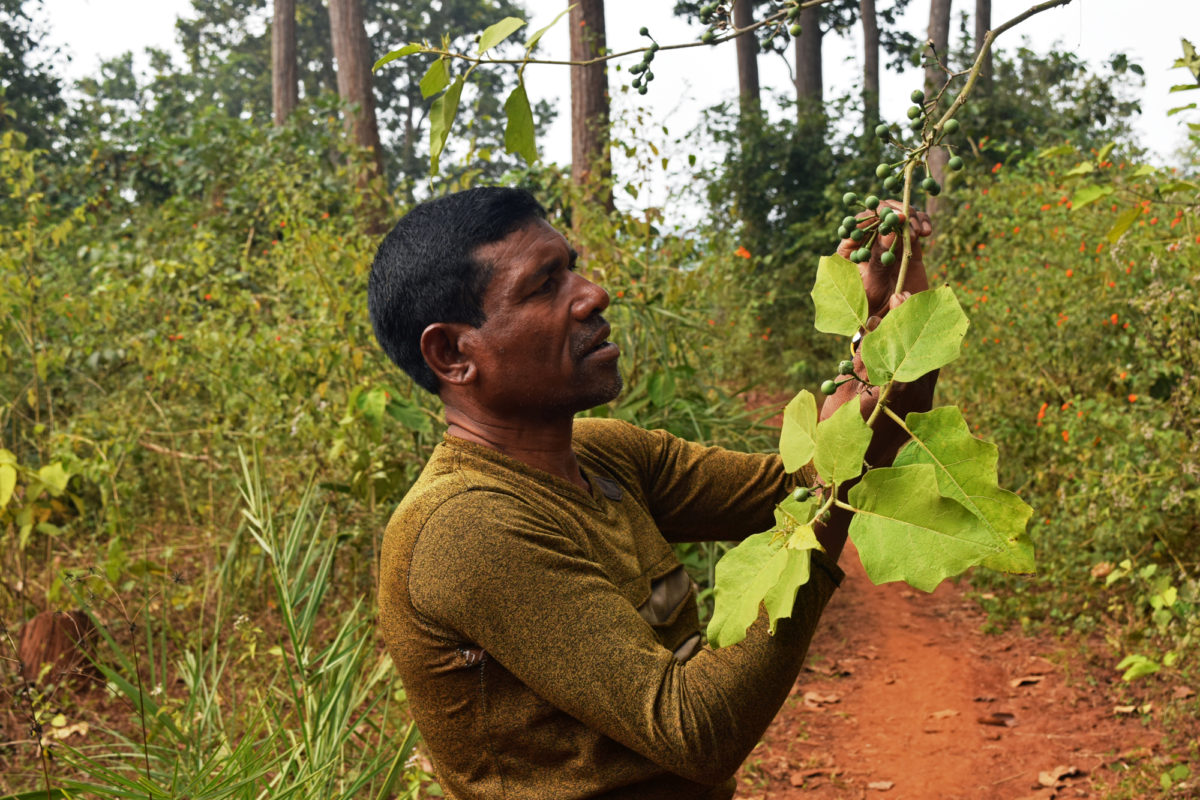 Balakrushna Jani shows a medicinal plant which was available in abundance in their old forest before being replaced by teak plantations.

Following concerns raised by environmentalists and biodiversity conservationists, the forest department has stopped planting teak trees in Kandhamal district. “Since the last two years, we are raising indigenous seedlings to plant in the forest. We have stopped planting tree species like teak, Chakunda (Cassia tora), Acacia mangium, eucalyptus,” confirmed Viswanath Neelamber, Divisional Forest Officer of Baliguda of Kandhamal district. However, raising teak saplings and seedlings in the departmental nursery has not stopped. “We distribute teak saplings to people who voluntarily opt to plant teak in their private lands,” the DFO added.

Kandhamal district has a history of community forest conservation. As per a forestry policy and institutions working paper of the Food and Agriculture Organisation of the United Nations, the communities of Kandhamal joined conservation activities with the realisation that they have to assume responsibility to protect their forests to avoid threats to food supply and livelihood opportunities.

Banner image: Rajkumari Majhi’s farmland and livelihood was disrupted due to the government planted teak forests. Photo by Basudev Mahapatra.