In the West Garo Hills district of Meghalaya, where plains fringe lush green hill slopes, shifting cultivation is the most extensive land-use, followed by tree plantations, while old-growth forest is confined to only a few locations, a study finds, contradicting government reports on the area of the district under forest cover.

The study findings are in “sharp contrast” to various official reports and studies, including from the Forest Survey of India, the Wastelands Atlas of India and state government statistics that show the landscape as primarily forested with only small fractions under shifting cultivation, locally known as jhum.

Based on fieldwork and a two-season Landsat image analysis (2013 to 2014) to map the forest-agriculture frontier of West Garo Hills district, Meghalaya, in northeast India, the study specifically contests India State of Forest (ISFR) 2015 report that claimed a total of 79 percent (78.84 percent) ‘forest cover’ in West Garo Hills district.

Unlike other states, forests in Meghalaya are largely under community ownership. Researchers found that a lot of lands in the West Garo Hills district are one or the other kind of plantation such as cashew, or young or old fallow shifting cultivation fields.

The differences are a consequence of the lack of clear definitions and poor understanding of what constitutes shifting cultivation and forest. “In fact, we found that shifting cultivation lands (active cultivation area and fallows) occupy a total of 39 percent of the landscape,” first author of the study Amit John Kurien at Ashoka Trust for Research in Ecology and the Environment, Bengaluru, told Mongabay-India via email.

“Old-growth forests (which we defined as those lands with more than 20-year-old relatively undisturbed natural tree growth) that are perhaps more relevant for biodiversity conservation was only 9.7 percent and mostly restricted to the Nokrek Biosphere Reserve and to some community-owned areas,” said Kurien.

Even summing up all land uses that contain tree cover, by including old-growth forest (10 percent) the large area that is under horticultural plantations (30 percent) and old fallows (six percent), could not tally up to the 79 percent mark of ISFR 2015 tree cover (forest cover) estimates.

“Our land use map showed that 29 percent of the district is under either actively cultivated shifting cultivation fields or wet rice farms which contain very few trees with huge crown cover. This indicates that the mapping methodology used in ISFR also has serious inconsistencies that need to be looked into,” Kurien said.

The observations from the analysis suggest that the ISFR estimation technique is not totally reliable and this is most likely because of a combination of a lack of sufficiently fine-mapping classes and inadequate ground-truthing, according to the researchers.

As per the ISFR report, “forest cover” includes all tree patches which have canopy density more than 10 percent and area of one hectare or more in size, irrespective of their legal status and species composition. The term “Recorded Forest Area” (RFA) is used for lands which have been notified as “forest” under any government Act or rules or recorded as “forest” in the government records.

The calculations are largely based on satellite data. It includes information on forest cover, tree cover, mangrove cover, growing stock inside and outside the forest areas, carbon stock in India’s forests, forest types and biodiversity, forest fire monitoring and forest cover in different slopes and altitudes.

Kurien emphasised the definition of ‘forest’ is too broad because it does not distinguish non-forest land uses (mostly agriculture) that contain trees such as in shifting cultivation fallows, horticulture plantations, etc. These have to be separately represented somewhere in a forest mapping report because horticulture plantations don’t have much biodiversity value but are needed for livelihoods. Moreover, including them as the forest does not help policymakers to know where they need to pay more conservation attention.

“Shifting cultivation fallows provides food security and nutritious, pesticide-free crops and ensures food security and they contain much biodiversity and so has value on both fronts. In shifting cultivation landscapes of Meghalaya, apart from the fallows, land uses such as horticultural plantations exist alongside biodiversity and tree-rich forests. All these lands look ‘forest-like’ from the sky and so if mapping agencies like FSI are not careful their estimates will be wrong,” he said.

Since ISFR focuses on tree cover they end up classifying all these areas as well as fallows of shifting cultivation lands that have trees as forests. “As long as ISFR sticks to their existing definitions – which they have been doing for decades now – the flaws of their methodology in the context of shifting cultivation landscapes pointed out by our paper will remain in the future ISFRs,” added Kurien.

This means that ISFR claims that northeast India contains a quarter of the country’s forests “potentially is and will continue to be, doubtful.”

“This is a problem for not only forest, but also agriculture policy, and needs a quick remedy. They have not changed their methodology in the 2019 report,” Kurien said.

“If you look at the shifting cultivation landscape in Nagaland, there exists a wide range of fallow forests (secondary forests) ranging from 10 to 30 years old. Whenever required the community will clear selected areas for farming from within such forests. Much against popular belief, they do not go into primary forests. There are very limited reserve forests and protected forest areas in the northeast. Conflicts may, however, arise when the forest department dubs them as ‘forest area’ and make it seem like forests under their management,” questioned Jamir.

This fundamental characteristic – two distinct land-use types alternating on the same piece of land – has never been considered while formulating policies in the context of managing shifting cultivation, it underscores. Shifting cultivation fallows must be legally perceived and categorised as ‘regenerating fallows’ which may if given sufficient time, regenerate into secondary forests. Such regenerating fallows add to the forest cover of an area, the report said.

R.M. Pant, Director, National Institute of Rural Development and Panchayat Raj (NIRDPR-NERC), and one of the authors of the 2018 NITI Aayog report said the fallow period between jhum cycles (for regeneration of forest) has thinned down from 20 to 25 years to three to five years owing to various factors such as a population boom which has put pressures on land availability for agriculture.

Jamir reiterated that “shifting cultivation includes fallow forests” and “you need to know what it is and what it isn’t.”

“Right now it may be the case that the Forest Survey of India is saying they are forested areas, but the community developed it as a forest because shifting cultivation does need those forests. You have to do extensive ground-truthing and can’t rely on satellite mapping alone for data,” he added.

Amit John Kurien said without a revision of the definition of forest, the map classes, and mapping methodology, claims about shifting cultivation-induced deforestation cannot be made.

The 2018 NITI Aayog report points out that jhum must not be attributed as a reason for the loss of forest, which the ISFR 2015 does. “A jhum fallow may look like a forest when sensed from a remote satellite but it is a temporary phase and the jhumias have a right to convert it back to agricultural land.”

“If all jhum lands are converted to forests there will be no land for jhum farmers to grow their food, the forest department must not look at jhum lands as prescribed in Forest Policy 1988. The Forest Policy needs to be suitably revised,” the think tank’s report said.

The NITI Aayog report also draws attention to the variation in data published by various agencies, stating that the variation raises “serious concerns” regarding the accuracy and veracity of figures provided by different agencies.

Pant said exercises are underway to map the extent of shifting cultivation in landscapes in each state of the northeast.

“In some cases where it is too remote to do ground-truthing, such data is extremely important. Jhuming is mainly for subsistence, it doesn’t give you cash.  People want cash now to fulfil their aspirations and there is a realisation that jhuming is not sustainable in the way that is done now,” Pant said.

(At the time of publishing, Forest Survey of India had not responded to Mongabay India’s queries) 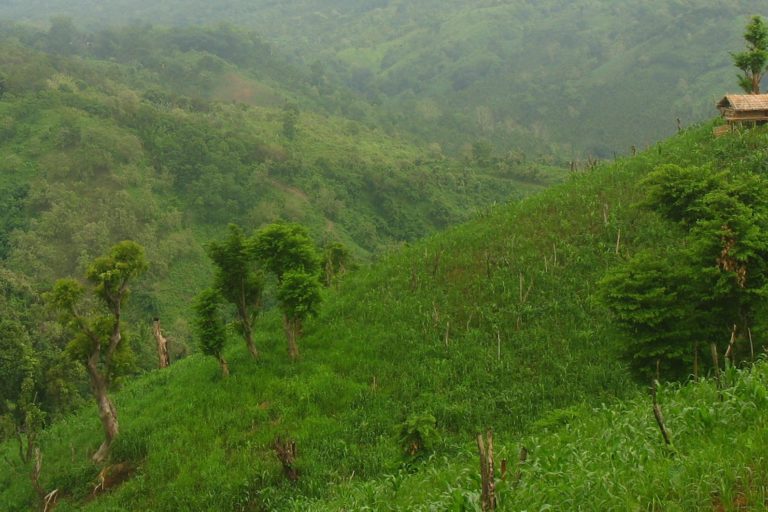