On a sunny afternoon of March 18, 2020, while lost in his dreams, Sukaldhar Yadav was jolted awake by an urgent knocking on his door. “My nephew is down with malaria, please help,” said the visitor. With no time to spare, the 76-year-old healer jumped on a motorcycle and sped off to treat another seriously ill patient living beyond the reach of modern medicine.

Known to the world for a 40 year Maoist insurgency, the forest region of Bastar in Chhattisgarh in central India is a treasure trove of medicinal plants and traditional healing practices. The tropical hotspot is also home to a unique treatment for malaria involving the use of red ants (Oecophylla smaragdina). Known in the region as ‘Ved Raj‘ for his mastery over medicinal knowledge, Sukaldhar Yadav is one of the few remaining practitioners of the red ant treatment.

In this treatment, the nests of red ants can be found on every other tree in Bastar. Once the nest is collected, the patient’s head and ears are covered with cloth, after which the nest is dropped over the body. The ants are left to bite for a while, after which they are knocked off and the patient is left to rest.

“In the past, many people used to rely on red ant treatment for malaria, but now only people from interior villages approach me in their time of need. Only when every other treatment fails do family members come here to collect me,” he said.

Red ants are also a local delicacy in the region and came into the limelight when British celebrity chef Gordon Ramsay visited Bastar and treated himself to a paste made from red ants. “During the onset of fever, we make chutney (paste) using the ants, ginger, garlic, coriander and chilli. We have been using it as medicine for generations” said Yadav.

A 2015 study by V.V Vidhu and D.A Evans, of tribal people in Kerala. confirmed the presence of pharmacologically active compounds with antioxidant, anti-arthritic and antimicrobial activities in the abdominal glands of Oecophylla smaragdina, which helps the traditional healers in making medicated oils that are used as an effective remedy against various diseases.

Apart from its battle with bullets, Bastar is in the midst of another war. The region has an Annual Parasite Incidence (API) rate of over 10 confirmed cases of malaria per thousand population, one of the highest in the country. Even though the health department has been relentless in their fight against the disease every year, the growing number of cases and emergence of drug resistance are a cause for worry, leaving villagers in pursuit of traditional healers like Yadav as a last-ditch effort.

If that too fails, patients must embark on a 300-kilometres journey to the nearest city of Visakhapatnam in the neighbouring state of Andhra Pradesh for medical treatment. The long journey, undertaken by the countless number of people in the region, paints a grim picture of how indigenous communities reliant on traditional healers are vulnerable to epidemics like COVID-19.

Past outbreaks show the importance of engaging traditional healers

Some lessons on the importance of engaging with traditional healers during a disease outbreak can be gleaned from the Ebola epidemic in Sierra Leone. When the disease first struck the country, many refused Western medication and opted for treatment from one of the 45,000 healers in the country. The first case in the country was traced back to a young woman infected by a traditional healer, who was subsequently linked to 365 Ebola deaths. As part of emergency measures, traditional medicine was outlawed. However, authorities struggled to contain the epidemic and soon enlisted the help of traditional healers to fight back the virus. While Sierra Leone had only 1.9 health workers for every 10,000 people, almost every village had a traditional healer, who grew to play an important role in educating people on how to avoid, treat and stop spreading the virus.

Closer home, in the forests of Bastar, there are interesting examples of how local priests and traditional healers supplement the efforts of the health department to prevent tropical diseases like malaria from spiralling out of control. Up north in Keshkal, around 200 km to the north of Bastar, Balram Ghour is the Mhanji (chief priest) of the Bangharam temple in Keshkal, who holds power over 84 prakna (settlements) of Keshkal.

“If someone approaches me with a disease, I pray in front of Bangaram Maa and take them to the doctor saab,” said Ghour. The doctor saab is a sub-deity placed near the main temple and is said to be one of the early doctors who came to treat the tribal people in the region.

“I wave the doctor’s wooden rod around their head and pray for their fast recovery,” Ghour added. During the ceremony, the priest feels the pulse of the patient and gauges the extent of the illness. Though quite unorthodox, in many ways the system relieves pressure from local hospitals as most minor cases are healed with the placebo effect of the ritual, while major cases are referred or reported to the hospital without fail.

Health officials are of the opinion that leveraging the people’s trust and power which priests and healers hold over the community is a good way of tackling malaria and other diseases.

“We have to work with the priests and local practitioners in the region. We request them to send the sick ones to our outreach workers or refer them to nearby hospitals. That’s the only way to fight malaria,” said D.K Bisen, the block-level medical officer for Keshkal.

This unique blend of modern and traditional health care system offers hope to a region marred with death rates due to malaria. Several measures, which include proactive engagement with communities, are also undertaken in the fight against malaria.

In order to ensure the use of mosquito nets in the region, a system of whistling is put into practice by the local health department, with the help of village-level medical workers. Every evening during the early days of a malarial outbreak, ASHA (Accredited Social Health Activist) workers stroll through the streets blowing whistles, reminding the villagers to put up their mosquito nets. 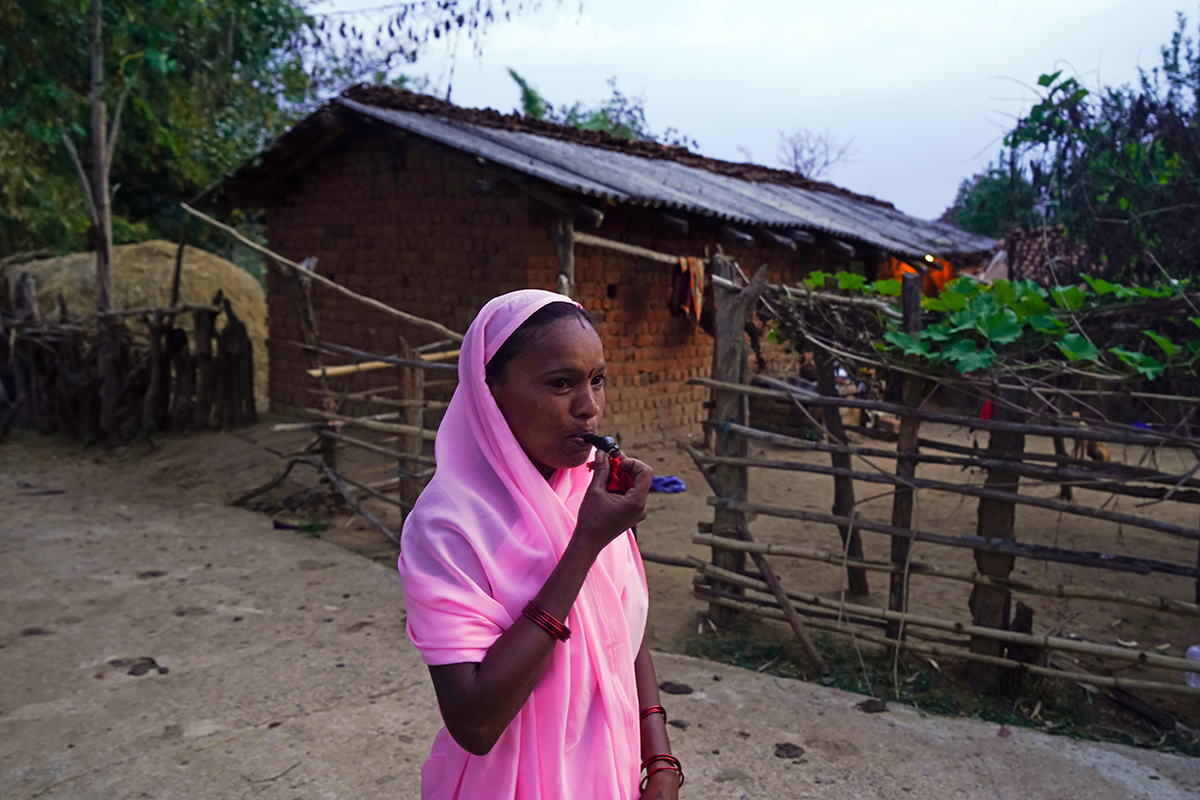 An ASHA worker blows a whistle to remind the community to use mosquito nets, a few days before the nationwide COVID-19 lockdown was imposed. Photo by Vishnu Prasad.

The cultural practices and traditional healing can either aid or become detrimental to the efforts in tackling the current epidemic. As seen from successful local efforts containing malaria in Bastar, a revised approach in public health that takes into account culture, traditions and imbibed structural inequities in accessing modern medicine can help cap the spread of COVID-19 in an effective manner.

Though no COVID-19 cases have been reported from Bastar, tribal people who are employed at chilli fields along the Godavari valley are returning to their villages, in midst of the lockdown and travelling through the forests, causing worry at various quarters.

“We haven’t received any special advisories from the health department regarding coronavirus, but we are spreading awareness through our network on precautionary measures,” said Nirmal Awasthi, founder of Chhattisgarh Traditional Healers Association, a collective of 3,200 traditional healers across the state.

With 37 cases of people reported with COVID-19 as of April 26, Chhattisgarh has been reliant on over 60,000 Mitanin (women community health workers) to spread awareness across the state. “With lots of panic and confusion doing the rounds over COVID-19, the plans to even coordinate with traditional health practitioners comprehensively is nearly impossible due to the absence of a unified body,” said Prabir Chatterjee, a former senior health official.

With a long-overdue plan for establishing the proposed traditional health board in the state and the failure to forge a formal bond, which could have been an ally in systematically integrating traditional health practitioners into public health systems and bolstering disease monitoring capacity and implementing preventive measures, it sure looks like a lost opportunity,

While the state failed to leverage the opportunity, The University of Trans-Disciplinary Health Sciences and Technology (TDU), which offers certification programmes to traditional health practitioners, sprung into action, planning to implement a project on using medicinal plants as a preventive measure in tackling the COVID-19 crisis.

“We plan to pilot the project once the severity of the lockdown is over through a network of traditional healers who have been working closely with us,” said Hariramamurthi G., head of Centre for Local Health Traditions and Policy at TDU, reiterating the often underlooked role of traditional health practices in fulfilling the needs of rural communities across the country.

This story was produced in collaboration with Internews and the Earth Journalism Network.

Banner image: Sukaldhar Yadav, a traditional healer on his way to collect an ant nest. Chhapra, a paste made from red ants, is a traditional delicacy and medicine in Bastar. Photo by Vishnu Prasad.