Vultures in Bundelkhand rise, but stray cattle and other concerns persist

Tranquil meditative profiles of Buddhist figures, which had been carved into the red sand stone cliffs centuries ago, watch the Betwa River languidly curve around hills of green. In the pervasive silence of Mahavir Swami Wildlife Sanctuary near Deogarh in Uttar Pradesh’s part of Bundelkhand, herds of stray cattle munch on drying shrubs, monkeys hop from rock face to canopy and the massive wingspan of the endangered long-billed vultures flutter awkwardly as they take off from cliffs.

A decade ago, it would have been rare to spot these vultures, says 67-year-old Prahalad Singh, a resident of Garholi village that is sandwiched between the hills, forests and the Betwa. The isolated cliffs around the village, which had been shaped by the Betwa over millennia, had provided the perfect nooks for the vultures to nest in.

“Around 20 years ago, there were thousands of vultures in the area. I could see them everywhere. Then they started disappearing. We thought they went elsewhere,” says Prahalad.  “It is only in the past few years, we have spotted pairs of vultures hanging around cliffs again.”

His observations echo among those living in Bundelkhand’s Betwa valley. Near the weathered cenotaphs of Orchha’s monuments, villagers have said that the occasional vulture is seen, giving hope to the return of the species that was “present in their hundreds or thousands” decades ago.

Bundelkhand, which traverses Uttar Pradesh and Madhya Pradesh and is one of the most backward regions in the country, is an important breeding site for the Gyps vulture species whose populations had declined by over 99% since the 1970s. The region is home to the Gyps species including slender-billed vulture (Gyps tenuirostris), Indian or long-billed vulture (Gyps indicus), white-rumped vulture (Gyps bengalensis) and Himalayan griffon (Gyps himalayensis) as well as the Egyptian vulture (Neophron percnopterus) and the red-headed or king vulture (Sarcogyps calvus).

Over 30 breeding sites have been identified in Bundelkhand, including in monuments built by Bundela kings, peepal trees in forests, cliff faces, and boulder nooks close to Chambal, Jamni and Betwa rivers.

The vulture population in 10 out of 14 districts of Bundelkhand has gone up by 103% in the past decade: from 1,313 in 2009 to 2,673 in 2019, shows data collected by Indian Biodiversity Conservation Society (IBCS), an NGO based out of Jhansi that carries out surveys in coordination with other researchers and the state forest department.

The rise can be attributed to a whole range of reasons. The most cited among them is the ban on diclofenac, a painkiller used in livestock, which was singularly blamed for the near-extinction of the Indian vulture population, and greater awareness among locals, forest department officials and NGOs for the conservation of vultures.

Threats to the population

However, looming in the shadows of this hopeful rise are a range of issues that threaten vulture populations. In March, the celebration of “Namaste Orchha” at the historic town led to the clearing of vulture nests on historic chattris. Across the plains, mining in cliffs, degradation of forests through timber cutting and overgrazing is displacing vultures; while, the Ken-Betwa river link may wipe out large vulture colonies in Panna Tiger reserve and along the Betwa.

Each reason is a concern as the vulture population remains on thin ice. Vultures are slow breeders, laying a single egg in one season. And once their nests are disturbed, they are unlikely to rebuild nests in the same location, says Sonika Kushwaha, founder of IBCS and who has been observing vultures in the region since 2008. “We’ve not seen diclofenac playing a big role in the extinction here. People here rely on traditional medicine for cows, and they do not invest that much in their desi (indigenous) varieties of cattle,” she says, while acknowledging the risk of cows with diclofenac, as even one such cow can impact the population of vultures given that it is so low. “Instead, other factors, particularly habitat loss and human disturbance, have led to their decline in Bundelkhand. It becomes imperative to address them,” she says.

In a study of 6 districts in Bundelkhand by IBCS, the prevalence of five human-induced changes were observed. Mining, human activity-related disturbance in monuments were a feature for a few breeding sites; while, cutting of trees was a larger problem. The most prevalent feature of all districts were carcass-related issues, including inappropriate dumping of carcasses and presence of feral dogs.

Since the tightening of norms for the sale of cows, forests in the region have been seeing a drastic change. Hundreds of aged cattle, that are no more able to produce milk, are being abandoned by villages in forests along the banks of the Betwa. Uttar Pradesh has seen a 17.34% increase in stray cattle population, while Madhya Pradesh has seen a 95% increase between 2012 and 2019. Bundelkhand is no different, with villagers along the Betwa pointing to an increase in crop loss due to a rapid increase in stray cattle population in forests over the past five years.

While the primary food source for the vulture is cattle, the method of opening the carcasses has changed. Before, wild animals such as leopards, wolves or hyaenas would tear open the carcass; or, local industries would leave remnants nearby that are eaten by vultures. The former has disappeared with habitat loss, and the latter through government prohibition. Instead, untended dead cattle is increasingly being eaten by feral dogs.

“Dead cattle can’t be eaten by vultures (apart from the King vulture) as their beaks cannot penetrate the hide. The presence of feral dogs leads to a competition of resources. Vultures are timid and will not come close to a carcass until the dogs have left. The more the dogs, the less the food for vultures,” says Kushwaha.

Instead of relying solely on cattle carcasses, researchers had instead pushed for vulture restaurants to be set-up where safe meats could be given to natural breeding vultures. In 2013, the first such restaurant in Uttar Pradesh was started in Deogarh. Forest officials would lift dead cattle from the area, test the carcass for diclofenac and then de-skin it at the feeding place.

The project seemed to have a positive effect on the local vulture population. Malkhand Singh, a resident of Deogarh who stays less than one kilometre from the restaurant, says he could see 60-70 vultures circling the spot. “I’d say 20-30 years ago, there were some 400-500 vultures in region, roosting on trees. Now, they are found only in the red sand stone cliffs and caves. But, at least they are back,” he says.

But, funds soon dried up and interest from the officials faded. “There are so many processes and approvals for this. No one was prepared to give us tractors for transport because they would not be paid on time, while it became expensive to take the carcass to a veterinarian,” says a forest official. “There is no point of vulture restaurants anymore. Many of the abandoned cattle die during the summers. We don’t know what kind of medicines had been fed for the cows.”

Amita Kanaujia, Professor, Zoology Department, University of Lucknow who has been studying vultures for more than 15 years, says they have been petitioning the government for the creation of not just more such restaurants, but also for creation of gaushalas (cow shelters) to house these abandoned cattle.

“If we can monitor cattle in these gaushalas, you can be assured that in 10 days there will be no diclofenac in the system of these cattle. When they die, they can be fed to the vultures, while leather and bones can provide some income to the gaushala. We need safe spaces for feeding of vultures, particularly during breeding season so that we can increase the survival rate of fledglings,” she says.

The source and reasons for the rise in feral cows may have multiple tangible and intangible effects on vulture population. For instance, the direct fallout of cow slaughter prohibition is the closing of slaughter houses which had become feeding sites for vultures. “A colony of vultures around Bhagwantpur slaughter houses in Jhansi can no more be seen. The vulture nests there have disappeared,” says Kanaujia.

Meanwhile, the increase in cattle numbers leads to an increase in their deaths in road or train accidents. This can bring the slow, seemingly-clumsy vultures directly in the path of oncoming vehicles. Past instances have shown this can be deadly for entire colonies of vultures, says Kanaujia.

While gaushalas and vulture restaurants can provide some safety in food availability and quality, the presence of large numbers of feral cows brings concerns of habitat.

The vast numbers overpowering forests is also leading to overgrazing of forest land. Forest personnel say survival of saplings – planted or natural – is low along the Betwa valley as they are eaten by stray cattle. A common refrain from villagers is the lack of grasslands around and in forests, and instead, they prune leaves from branches to feed sheep and buffaloes. In Lalitpur district where at least 480 vultures have been enumerated, very dense and moderate forests have declined by 48 sq.km. while scrub land has increased by 201 sq.km. since the turn of the millennium, shows Forest Survey of India’s State of Forest report. In Marod near Orchha, where a proposal for a vulture restaurant lies in the depths of bureaucracy, forests have been razed to dust while grazing is primarily around boulders that house King vultures.

“Vulture safe zones currently are areas without diclofenac usage. But, the reasons for declines are far more complex. We need a vulture safe zone that is free of human activities,” says Kanaujia. 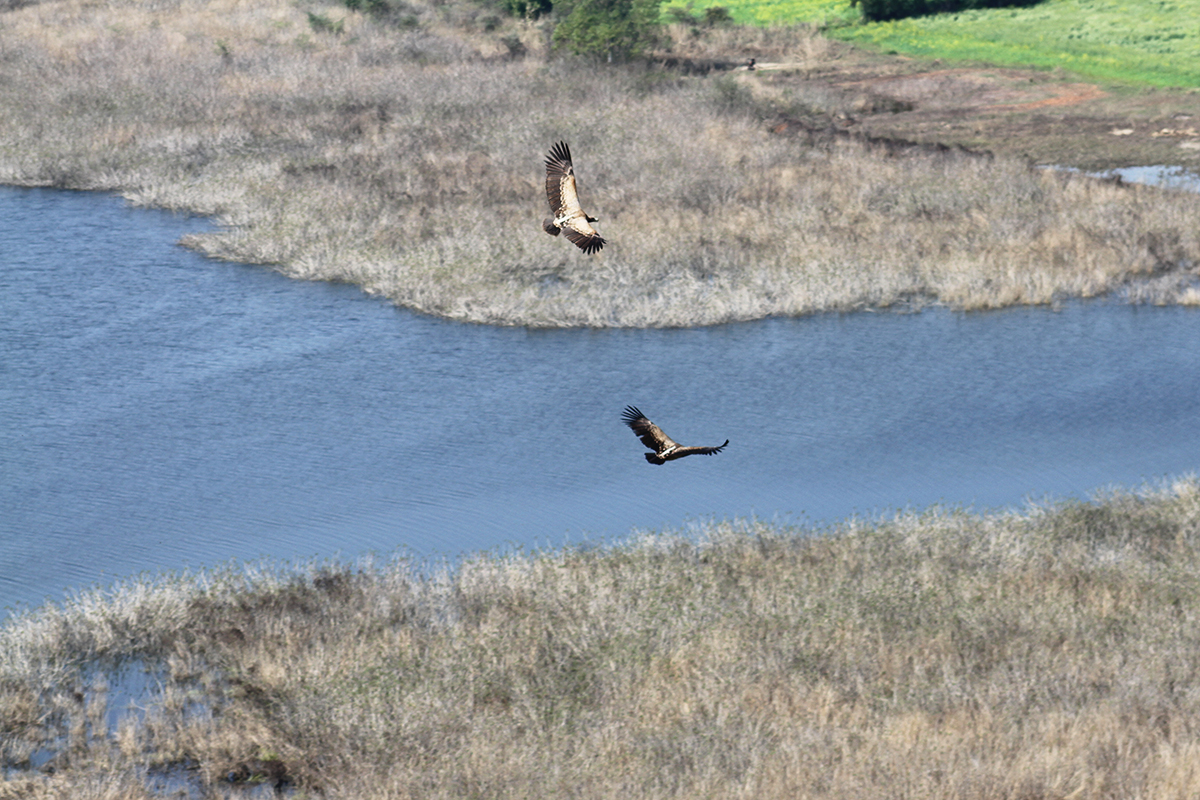 Vultures glide over the banks of river Betwa. Photo by Akhilesh Kumar, IBCS.

Banner image: Long-billed vultures use the monuments at Orchha in Bundelkhand as nesting sites. Photo by Photo by Akhilesh Kumar, IBCS.

This article has been produced as part of Veditum India Foundation’s Moving Upstream fellowship program.