A few weeks ago, 22-year-old Dhananjay K.C. was worried that thousands of kilograms of grapes grown at his family’s farmland would go waste as the crop was ready but its sale had become nearly impossible due to the nationwide lockdown imposed to control the spread of coronavirus. However, similar to many farmers across India, he decided to turn the crisis into an opportunity and reached out to online crop markets and groups to sell their produce directly to consumers.

“I found about an online platform, Harvesting Farmer Network (HFN) that was helping farmers in selling their crops and getting a good price for it. I contacted them, posted details of the crop and soon we sold nearly half of our crop to a buyer in Bengaluru,” Dhananjay K.C. told Mongabay-India.

Dhananjay and his family live in the Gudihalli region on the outskirts of Bengaluru (Karnataka’s capital city). He is a mechanical engineering student in an institute in Bengaluru and had come home to be with his family during the lockdown. India’s nationwide lockdown first started on March 25 for a period of three weeks after which it was extended twice, with the current extension up to May 17.

The HFN’s Twitter post a month ago that shared information about his crop has garnered over 600 retweets and one thousand likes so far. “We got many calls and soon found a good deal. We sold the entire produce of grapes – about 20-25 tonnes of grapes – to a buyer in Bengaluru through HFN and the rest to some local nearby dealers. The best part is that the price we got from the buyer in Bengaluru is much better than the usual non-lockdown price,” said Dhananjay.

He explained that he sold one kilogram of grapes for about Rs. 25 and after deducting all expenses including taxes and transport they were able to make a profit of Rs. 8-9 per kilogram. “This is certainly a better return than what we usually get. For instance, last year, this margin was only about Rs 4-5 per kilogram. This can certainly be a viable model for farmers like us,” he said.

Dhananjay is among many farmers around the country left in the lurch by authorities to fend for themselves during the lockdown. Many of them, however, had decided not to give up. The HFN, for instance, emerged during the lockdown as one such online network for farmers to avoid exploitation by middlemen and earn better money for their crops.

The network, on which about 2,000 farmers have posted details of their crops so far, was developed by 41-year-old Ruchit Garg, a Silicon Valley professional who returned to India a few months ago after working with major firms there. “During the lockdown, we all saw what the farmers were facing. I thought why can’t farmers and consumers be mobilised and directly connected. On April 12, the HFN’s Twitter handle posted six tweets with farmers looking to sell their crops and from there it just took off. “The phones have not stopped ringing since then. We are working round the clock and we are not complaining about it. In less than a month, we have listed 1.5 million kilograms of crops (fruits, vegetable, wheat, eggs etc.) on our social media platforms and as per our initial estimates, we have already facilitated the selling of about 250,000 kilograms (directly or indirectly). With farmers sharing their experience with their peers, the network is growing rapidly,” Garg told Mongabay-India.

Prior to launching a Twitter handle in April which facilitates the interaction of farmers with consumers, the HFN mainly had an interface where farmers connected with each other only. It is spread across 22 states and has a reach of about one million farmers.

Explaining the whole supply chain process, he said that typically a farmer’s crop goes through at least 5-6 layers of middlemen before it reaches the final consumer and at every layer the price increases without proportionate value addition.

Asked about the economics behind the HFN’s model and what’s in it for him, HFN’s founder Ruchit Garg explained that “in the future, as we put a lot of pieces of buying directly from farmer puzzle together, we will be able to deliver fresh local produce to consumers at a very affordable price while providing farmers with a lion share of income. To build, sustain and grow such a platform we plan to charge a very nominal fee per transaction, but only for transactions we handhold.”

“If a consumer is buying a fruit or vegetable for about Rs. 100 per kg then the share of the farmer in probably less than Rs. 15 while most go to the layers of the middlemen. The system has not changed for ages. Not all middlemen are bad but our idea is to increase the share of farmers and find a way around the traditional nexus and supply chain route. It is also important as farmers need to be independent – like in the case of lockdown they had nowhere to go after mandis (local markets) were closed during the lockdown. The plan is to define the whole process in such a way that if a farm product is being sold at Rs. 100 per kilogram then Rs. 70-75 should reach the farmer,” said Garg, who lives in Chandigarh with his family.

After Prime Minister Narendra Modi’s lockdown announcement on March 24, the Union Home Ministry had come out with guidelines about activities that were allowed under lockdown. However, the lockdown which coincided with harvest season was not clear about agricultural activities. Subsequently, after several reports highlighted problems faced by farmers, the central government granted relaxation in the nationwide lockdown and allowed activities related to the procurement of agriculture products, work in agriculture mandis (markets), farming operations by farmers and farmworkers in the field and intrastate and interstate movement of harvesting and sowing related machines like combined harvester and other agriculture implements.

Going by the numerous testimonials shared by Garg, it was not just the farmers who were waiting for such an opportunity but some of the bulk buyers too.

For instance, Ashish Kumar, who lives in Delhi’s adjacent city of Ghaziabad (Uttar Pradesh), also used the crisis to deal with farmers directly.

Sharing his story, Kumar, who runs a food business for students in Delhi, told Mongabay-India that his food outlets were closed due to the lockdown as students had returned home. “Like many others, I was just reading and sharing things online when I saw a tweet from the HFN about a farmer in Mansa (Punjab) who was trying to find a buyer for 5,000 kilograms of capsicum at just Rs. 7 per kg. I contacted him and tried finding buyers. It was not economically viable for the farmer to sell in a small quantity and transport. I am still trying,” said Kumar.

But in another case, he got some success. Kumar saw a post about a farmer in Karnataka who was looking to sell papayas. “I contacted a friend in Patna who was willing to buy them. I got them talking and they soon cracked a favourable deal for both of them. The farmer sold 18,000 kgs of papaya. In this case, the time was of value as it is a perishable item.” In another case, Kumar ensured delivery of bananas, directly from a farmer in Andhra Pradesh, to his friend in Delhi who works with an online fruit and vegetable delivery service.

When asked why he is doing this if he is not earning any profit from these deals, Kumar said it is about the experience. “I am in the restaurant business. It makes sense for me to have better supply chain options. Also, we all talk about supporting farmers. So, such a model can be a win-win situation for everyone,” Kumar emphasised.

In addition to the HFN, Garg said there are several such small or big platforms and they all are witnessing a lot of traction both from buyers and sellers. Social media, Twitter in particular, has been important for facilitating many of these transactions. For instance, one Deshraj Choudhary posted a tweet seeking a buyer for 600,000 eggs for Rs. 3 per egg in Jaipur (Rajasthan) while in another case a buyer is looking to buy 5,000 pieces of green coconut every week. In one case, an individual posted for selling 40 sheep.

HFN has also highlighted some basic rules and suggestions for those engaging through the platform like calling a local farmer only as they won’t be able to deliver if they are far off, buying in bulk to make it economically viable and to be fair to each other. Asked how they ascertain if someone’s post is genuine, Garg said, “if we feel suspicious we ask the farmers to post proper pictures of his fields. Based on the learning of the past one month, connecting farmers with customers, we will be implementing more processes in place so that only genuine farmers and serious buyers get connected and do business in a trustworthy fashion.”

The HFN is also looking to serve all kinds of customers. For example, it is soon launching a section for “no-pesticide leafy vegetables” to attract people who are looking for “healthy and local vegetables directly from farmers.” 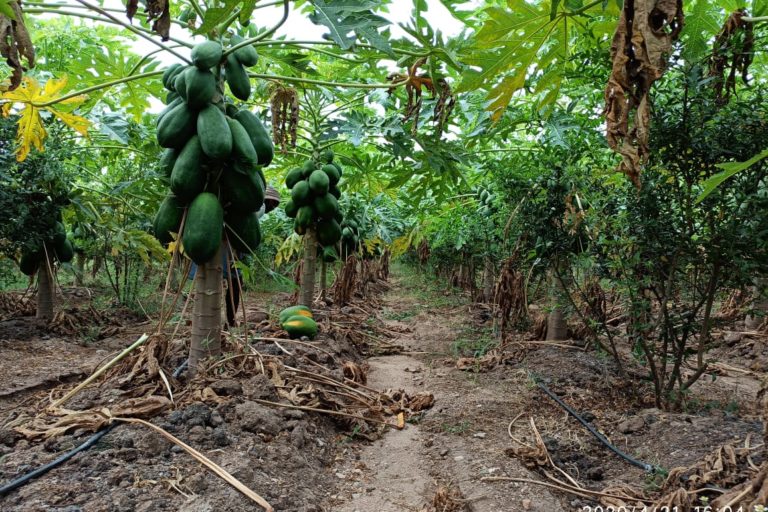 Papayas from a farmer in Karnataka was sold to a buyer in Patna through the Harvesting Farmer Network. Photo from Ashish Kumar.

Not everyone is lucky, a lot of issues need to be ironed out

However, not everyone is lucky as social media is abuzz with pictures and videos of farmers destroying their crops due to the absence of buyers and market support in the lockdown.

60-year-old Vinay Ketkar, a Maharashtra-based mango grower, used the messaging platform Whatsapp to connect to customers in Mumbai and sold about 30,000-40,000 Alphonso mangoes (about 8-10 tonnes). “Our farms are in Ratnagiri region, the coastal area of Maharashtra, and many farmers from my village and 4-5 other adjacent villages sold our mangoes to customers in Mumbai. But transportation of our produce to the major cities is the biggest hurdle. Once a driver visits the cities to deliver and returns he is not allowed to re-enter and asked to go for two weeks of quarantine. In such a scenario, it becomes nearly impossible for farmers to sell all the full produce,” Ketkar told Mongabay-India.

HFN’s Garg echoed similar views. “There are many issues that need to be addressed but I hope people this direct contact with farmers is maintained to ensure it is a win for everyone.”

Banner image: A representational image of a farmer with the harvest. Photo by Neil Palmer (CIAT)/Flickr.