Anxious farmers in Maharashtra prepare to sow amidst lockdown

In April, amidst several gloomy developments related to COVID-19, there was one announcement that should have brought cheer to many farmers of Maharashtra, especially non-irrigated areas such as Marathwada and Vidarbha – the announcement that monsoon will arrive on time and will be normal. However, the news made most of the stakeholders anxious because of lack of preparedness for the upcoming kharif season. And though, in the next two to three weeks, a flurry of activity is expected to ensure farmers sow by first showers in June, many farmers are contemplating a reduction in sowing to minimise losses.

Kiran Pawar, from Latur district, usually would have been extremely busy at this time with trying to procure seeds, ensure fertiliser and pesticide supply and so on. However, with much of his previous stock of cotton unsold, he is doubtful about preparations for a good monsoon. He also has a stock of onions lying in his field and is worried about it getting spoilt. “We will have to try and sow millets, maybe not on the entire area but we will have to do something. Preparations are on but everything is in limbo.” The nearest market place for them – Udgir or Latur – is about 80 km from his village. Since transport and price for the produce are both unpredictable many farmers have reluctantly sold off their produce at lower prices in and around their villages. “There was a red zone area near us and so every village was barricaded, so the movement of vehicles was not easy.”

Maharashtra is the worst affected state in India with 35,058 COVID-19 positive cases and 1249 deaths as of May 19, 2020, and with a stringent lockdown in place which has now extended to March 31. The state has seen a high rate of farmers’ suicides in the past decade due to intermittent droughts and unseasonal hailstorms, among other factors.

Despite the government keeping agriculture-related activities out of the lockdown restrictions since April, the farmers have had to deal with two-fold challenges – loss and wastage of produce during lockdown and delay in preparations for the sowing season.

Losses from previous yield due to lockdown

Those who grew perishables such as vegetables and fruits ended up losing much of their produce because of closure of supply links and markets and they suffered financial losses with no compensation in sight.

Even with relatively long-lasting produce, such as onions and cotton, there have been delays in procurement and crash in prices. To add to that, in Nashik district, for example, some parts witnessed hailstorms causing damage to the existing crop of vegetables waiting to be harvested. The meteorological (Met) department has issued a warning for unseasonal rains and hailstorms for parts of the state in the coming week.

Reports indicate that around 40% of the bumper cotton crop this year continues to lie with farmers, notes Vijay Jawandia, veteran farmers’ activist (of Shetkari Sanghatana) from Vidarbha. He has written to Prime Minister Narendra Modi and Maharashtra Chief Minister Uddhav Thackeray to procure 100% of cotton from the farmers. “The rates offered by the free market are dismal and farmers will either lose the entire crop or sell at throwaway prices. How can they find any money for the upcoming season?” Consequently, liquidity has taken a hit, after losing the produce to lockdown.

Farmers from Nashik, Marathwada and Vidarbha, sent messages to this correspondent about losing their grapes, tomatoes, sweet lime, lemon, vegetables such as brinjal, cauliflower, cabbage and estimate losses ranging upto several lakh rupees. Some of these high yielding crops have huge investments and the farmers may lose all of it. As of now no official estimates of total losses incurred due to COVID-19 related restrictions have been released by any government department. Farmers say surveys of wastage have not been done.

Farmers and their products destroyed due to the lockdown 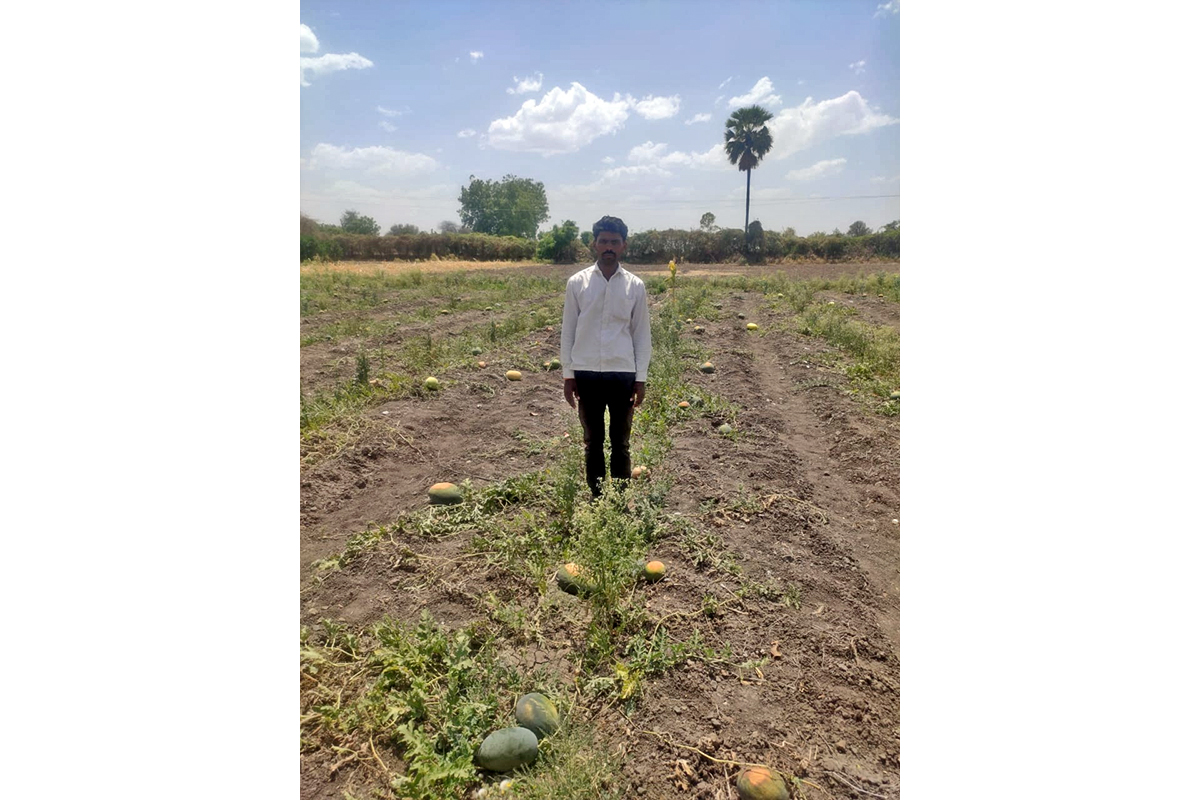 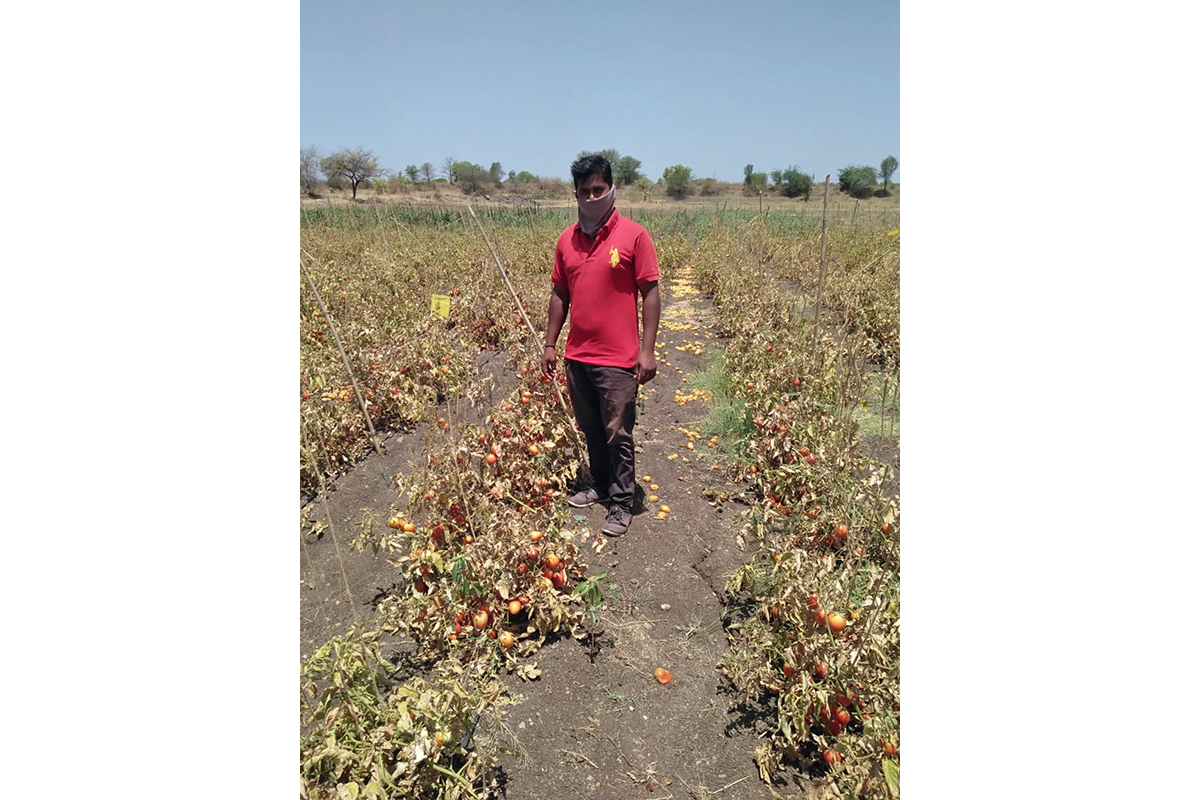 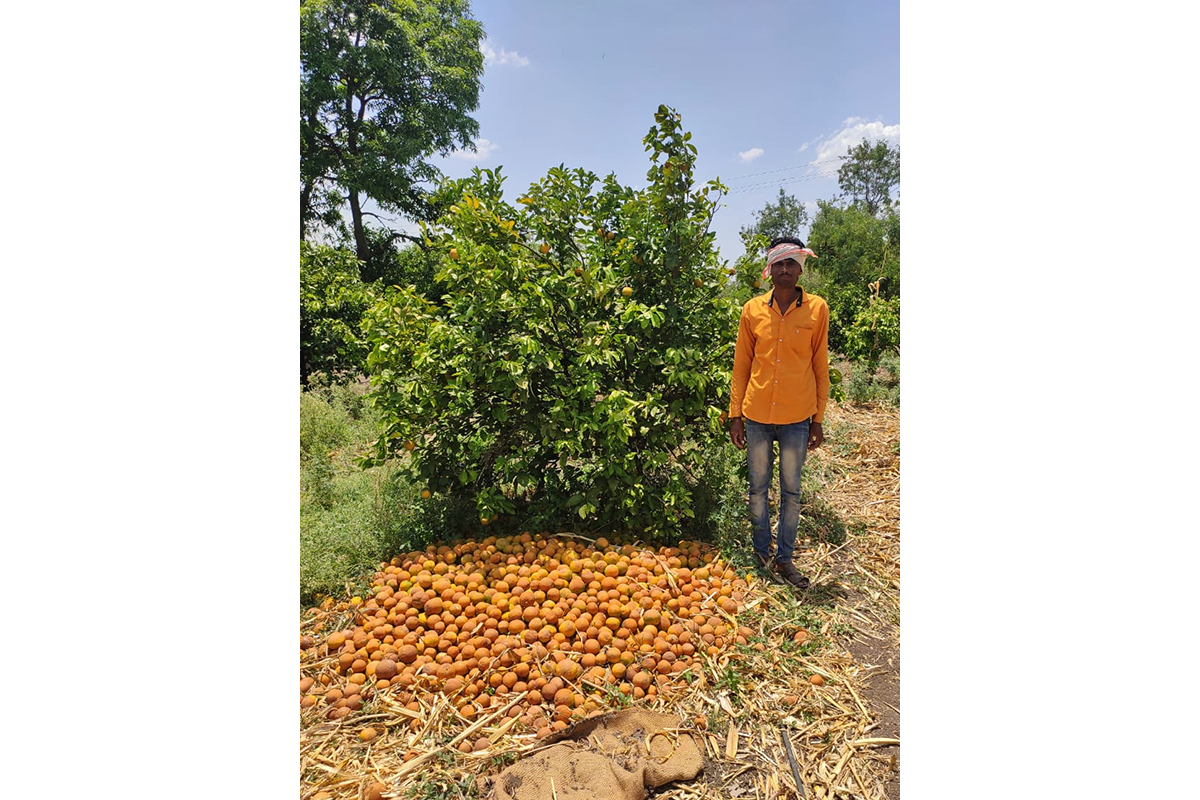 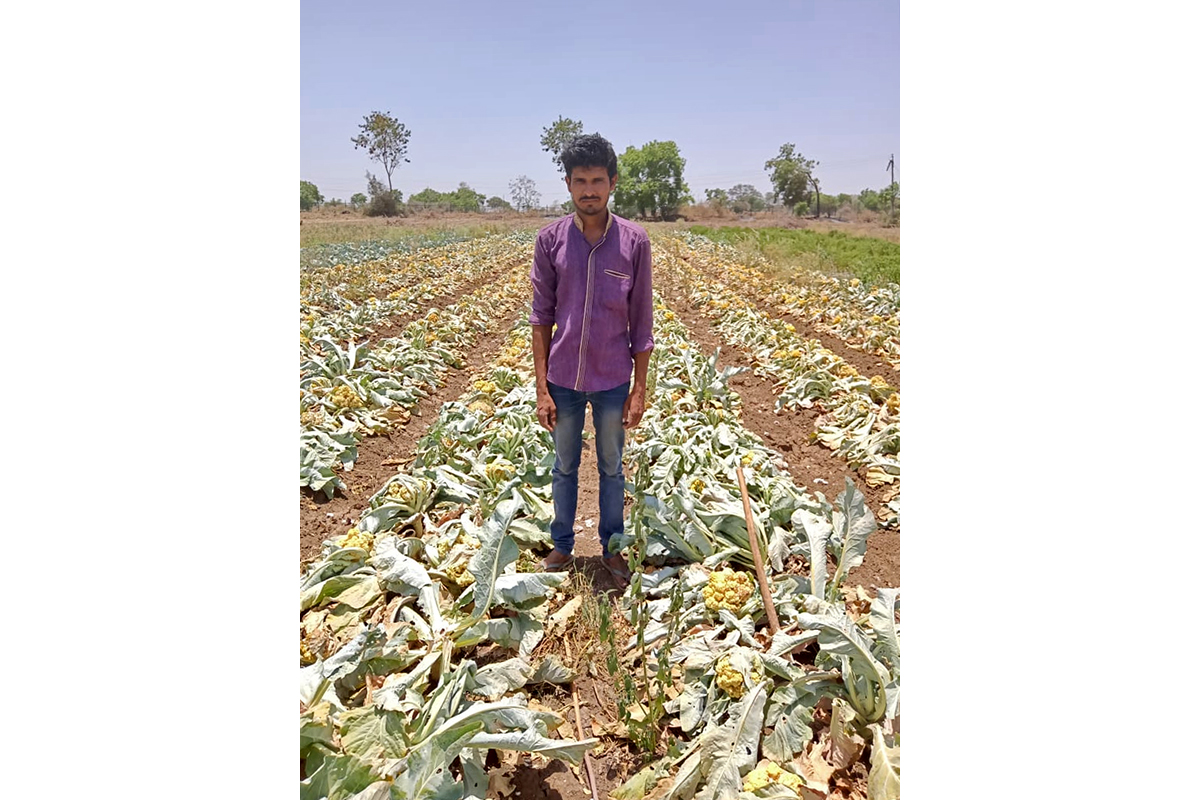 Secondly, various preparatory tasks such as crop loans process, procurement of seeds and fertiliser, organising farm labour are delayed. Though it is expected to pick up in the coming weeks, following government push, activists and experts believe it is already late for finance.

Vijay Anna Borade, head of Krishi Vidnyan Kendra in Jalna and expert on agrarian crisis, said, “Despite advisories from the central government, ultimately the execution depends on the local authorities and their priority is to stop the spread of the virus at any cost. That is understandable given how dangerous it is, but ultimately the farmers will bear the brunt – be it black marketing of input material or distress sales of produce or lack of finance.”

He said practical issues are making things worse, “Only 20 odd days are left before the rains and farmers are grappling with not getting diesel in a can for tractors. A tractor works for 6 hours with one refill. Is it practical for the farmer to bring it all the way to the petrol pump for each usage? This is just one of the examples of how things unfold at the local level and practical problems of rules on paper.”

The input costs are expected to go up – officially or unofficially. In some areas, the rate of a tractor for lease has almost doubled. After the debate around reduction of subsidies, as of now, the costs of fertiliser and pesticides may not increase this year.

But transport of the same is a challenge. Different roads or entry points are blocked or barricaded to prevent entry into villages as the villagers or local authorities are being cautious, disrupting the supply chain. Amit Mantri, who owns a seed supply store in Beed, says the activity is only about 10% of what it was last year. “We are not increasing any prices but shops will be open only from 7 am to 9 am on alternate days. We cannot give anything on credit as we are not sure if the farmers can pay the money back. There will be a scramble after a few days as not much time is left before monsoon begins.” Mahadev Tehale another seed supplier says normally at this time the seeds would reach retail outlets but at this point, they are only reaching the distributor. So it is yet to reach the wholesaler and then retailer, which could take another week or two.

Eknath Dawale, agriculture secretary of Maharashtra says several measures are underway. “We have been in touch with over 3000 farmers groups and procured 22,000 quintals of produce since the lockdown and connected to the markets in various cities. We are also planning to deliver inputs at doorstep and there will be no shortage of seeds or fertilisers.”

However, even as stocks become available and government plans to deliver inputs to farmers’ doorstep, financial woes may far outweigh the logistical challenges.

As of now, there is no announcement on blanket compensation for losses during lockdown or monetary support for this kharif season by the government. Even as the state government remains under severe fiscal deficit, it is unlikely that another waiver will come. One official informed that banks are still waiting for the waiver amount to reach them from the centre and the state.

On May 12 the Prime Minister Narendra Modi announced a Rs. 20 lakh crore (Rs. 20 trillion) economic package. Following that, according to an announcement by finance minister Nirmala Sitharaman, on May 14, Rs. 2 trillion will be used to help 25 million farmers in the form of cheap loans through Kisan Credit Card.

Even if the banks follow the directives of the government to not withhold loans for farmers, it is also likely that it may longer and the amounts may shrink. For example, without any crisis such as COVID-19, last year the loan disbursement was far from encouraging. “Of the total Rs. 583.24 billion sanctioned for year (2018-19), crop loan amount disbursed was Rs. 312.37 billion which works to 54 percent,” said a State Level Bankers’ Committee (SLBC) report. Only 28.64% of farmers had availed crop loans, a report said. Most farmers this correspondent spoke to informed about lockdown restrictions to access banking and that the losses from previous crop would make them defaulters and hence ineligible for a fresh loan.

Jawandia said including farm labour in MNREGA, the national level employment guarantee scheme, is essential for labourers as well as farmers. “Farmers do not have the wherewithal to organise money for all the inputs and labour. The government should bring farm labour under MNREGA and give some respite to both – the farmers and landless labourers.” Wages have reportedly come down from Rs. 250 per day to Rs. 150 for women workers and are expected to drop further.

“Farmers may choose to sow only on part of their land, just for their sustenance,” said Jayaram Sangale, from Sinnar, Nashik. Sangale has nearly two hectares of land but is planning to put just jowar (millets) in four acres and be done with for this year as he wishes to minimise his losses. “There is also no guarantee about how long the lockdown and present corona crisis will continue. Even if we get a good monsoon, other factors are not conducive at all. Who will ensure prices, procurement and compensation if things go wrong? The government tried to help by buying milk but that is not enough.”

Everyone is counting on the healthy monsoon and experts say that agriculture is the only vocation that can absorb labour at present – with industries reducing their capacities. However, if the farmers work on the principle of minimising losses and not growing more, there may be a different challenge. “The government should declare robust prices for grains right away before the seeds reach the retailers and farmers. That will assure and encourage the farmer to grow grains in ample quantity,” said Borade urging the government to declare COVID-19 as a natural calamity and take measures urgently.

Another unforeseen challenge is that of labourers, who are reaching villages. While some call it an opportunity, others think of it as a disaster waiting to happen. In the current scenario, if they are absorbed as agricultural labour and manage to get paid, it might help farmers and labourers but it is yet to happen.

The burden of socio-economic impact needs to be handled by the central and the state governments. Farmers like Kiran Pawar and Jayaram Sangale are worried that they will be the ones absorbing the real shock of COVID-19 related repercussions. But come June and they will be seen in their fields, sowing, nourishing and nurturing the soil, to keep their families and family vocation afloat – out of the sheer habit of generations or perhaps lack of choice.

Banner image: Farmer Parmeshwar Kade of village Kedar Wakdi with his tomato crops wasted because of the lockdown and disruption in the supply chain. Photo from KVK, Jalna.