On April 26, 2020, when the Dhemaji Boat Clinic was on its way to conduct a routine health camp in Pakhoriguri – one of the 2500 saporis or riverine islands situated across the 891 km long course of the river Brahmaputra in Assam – the clinic received a call to change course.

They were asked to head towards Udaypur Mechaki sapori in the same district (Dhemaji). Amid the novel coronavirus disease (COVID-19)-associated lockdown, their timely intervention in Udaypur led to the successful delivery of a baby on a country boat. This was not the first instance when a boat clinic responded to a call of distress on a remote island.

These boat clinics, a private-public partnership between the Centre for North East Studies and Policy Research (C-NES) and National Rural Health Mission (NRHM), government of Assam, have become the primary access to healthcare for almost three million inhabitants of the 2500 saporis where construction of permanent structure for healthcare facilities is almost impossible due to recurring flood.

Nearly six percent of Assam’s land is covered by these islands. As many as 15 boat clinics service 13 districts in the state since 2008-2009. NRHM covers the salaries of the staff, supplies, fuel, and cost of maintenance of the boats.

And as the country grapples with the challenge of curbing the spread of the novel coronavirus disease, these boat clinics have stepped up their efforts in these far-flung river islands, most of which lack access to basic health facilities.

Assam has recorded 64 COVID-19 positive cases, out of which 22 cases are currently active, as on May 11. Two people have died from the disease in the state while 39 have been discharged.

Riturekha Baruah, District Project Officer (DPO), Jorhat said: “In the boat, we have two medical officers, three Auxiliary Nurse Midwives, one DPO, one lab technician, one pharmacist, three community workers, one boat master, one helper, one driver, and one cook.”

As the pandemic unfolded the boat clinics launched awareness campaigns in the saporis about the newly emerged disease, advocating the need for social distancing, and are carrying out community surveillance in their designated areas.

Shyamjit Pashi, DPO, Morigaon, who is responsible for monitoring a population of 18,000 in 28 island villages, said their team started informing people about the guidelines and advisory about COVID-19 before the state-wide lockdown was announced in Assam.

“We conducted awareness meetings where we explained the necessity for social distancing.”

“After May 3, we have also started community surveillance as directed by the government. Our team is visiting every household and we are trying to find out people who have a fever or have recent travel history. We are then screening such people with thermal body scanners. If we find a person whose body temperature is more than 38 degree Celsius, our medical officer decides on collecting the swab of the patient and sending it for testing.”

Terming the people in the villages to be very co-operative so far, Pashi said, “They have understood why social distancing is required. 35 people from these saporis who work outside Assam returned home before lockdown. So, we ensured that they are quarantined at their home.”

Pashi mentioned that the livelihood of people has been severely affected due to lockdown. “A large section of people from these saporis work in the cities as daily wagers. They are not getting work and so they are coming back to their villages because here at least they will get some food. Also, farmers’ livelihoods are being hampered because they can’t sell their crops in the present situation,” he said.

While the boat clinic teams have been supplied with adequate masks, gloves, aprons, and hand sanitisers, the team members are finding it difficult to maintain social distancing among themselves.

Riturekha Baruah, DPO of the Jorhat boat clinic said: “While the boats are big, they are not big enough for the entire team to maintain social distancing. So, we have started working on a rotation basis and only 50 percent of the staff are present on the boat at a time.”

Khogeswar Pegu, village headman of Kerkeri village in Majuli district told Mongabay-India that these mobile clinics have been a huge source of relief for the people of these islands. Majuli is the world’s largest river island and is a district as well.

“The nearest healthcare facility from our village is at Narayanpur, which is one hour away. To reach Majuli town, we have to travel for two more hours. During monsoon, it was always a huge risk to travel with a patient. Now, because of these boat clinics, we are getting medical service at our doorsteps.”

The genesis of the boat clinics go back to the year 2004-05, when the C-NES under the leadership of its managing trustee, Sanjoy Hazarika, launched ‘Akha’ – described also as “A Ship Of Hope In A Valley Of Flood.” The idea was to provide mobile health services to the poor and the marginalised on the islands in Dibrugarh district. The concept won a World Bank Award for innovation aimed at bridging rural gaps.

Later, UNICEF came into the picture to build capacity and train, while the National Rural Health Mission (NRHM), Government of Assam, proposed a collaboration with C-NES as this was a big opportunity to provide sustained healthcare to the people living on the margins in these river islands.

Overcoming difficult terrain and harsh conditions is often a challenge for the team.
Arup Saikia, DPO, Dibrugarh explained: “As we have to spend a considerable amount of time on the boats, rough water and high wind during monsoon pose a threat. However, our biggest challenge arises during winters when the water level is low. During that period, we have to keep our boat far from the campsite and the team has to walk miles carrying medicines, vaccines, and other materials.”

Managing flood and a pandemic

Assam lies in the middle of the Brahmaputra and Barak river basins and is ravaged by monsoon floods every year and there is a major concern that this will affect social distancing in the current flood season.

All the rivers in Assam are liable to floods, mainly because they receive heavy rainfall within a short time, according to the Assam State Disaster Management Authority (ASDMA), emphasising that flood hazard risk in the state is due to a blend of numerous natural and anthropogenic factors.

The Brahmaputra Valley in Assam is one of the most hazard-prone regions of the country, with more than 40 percent of its land (3.2 million hectares) susceptible to flood damage. This is 9.4 percent of the country’s total flood-prone area.

Assam Health Minister Himanta Biswa said that the state is facing a “Himalayan challenge” this year with the annual flood, the Japanese encephalitis outbreak, and COVID-19. Anticipating this, the ASDMA has issued fresh guidelines for flood relief camps in the wake of the COVID-19 outbreak. 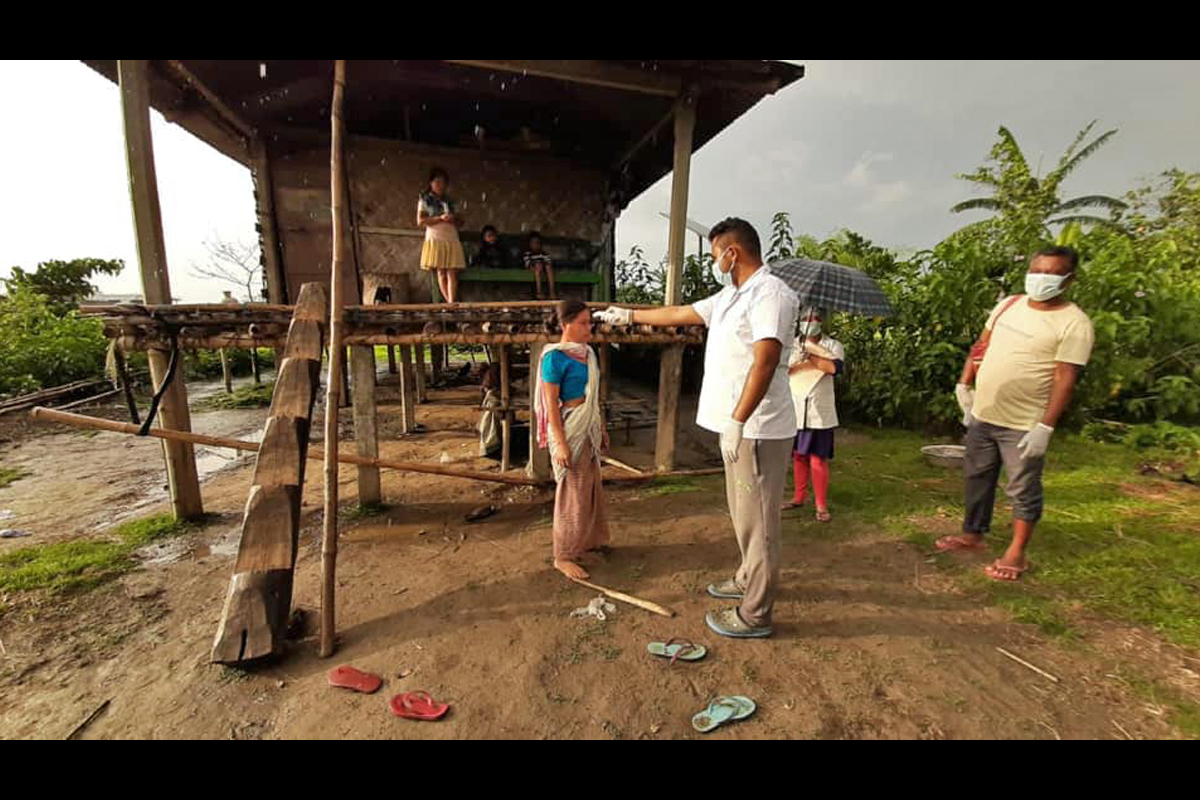 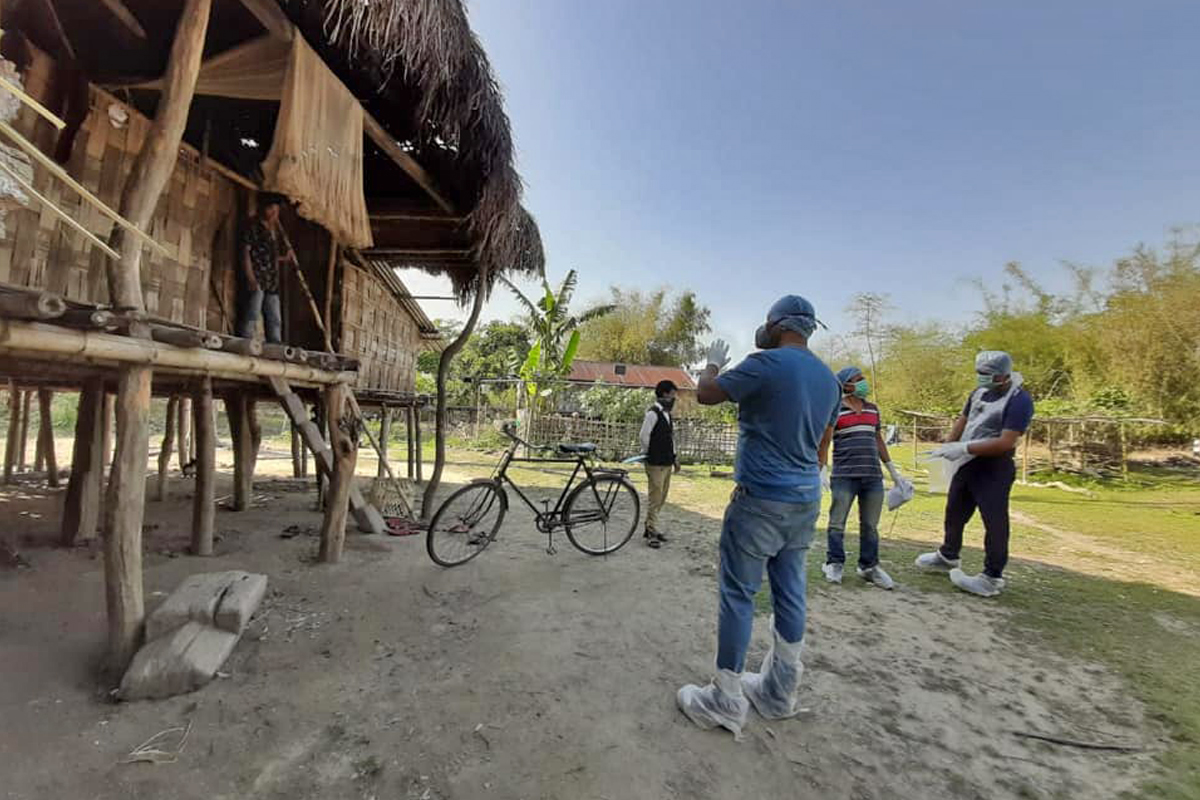 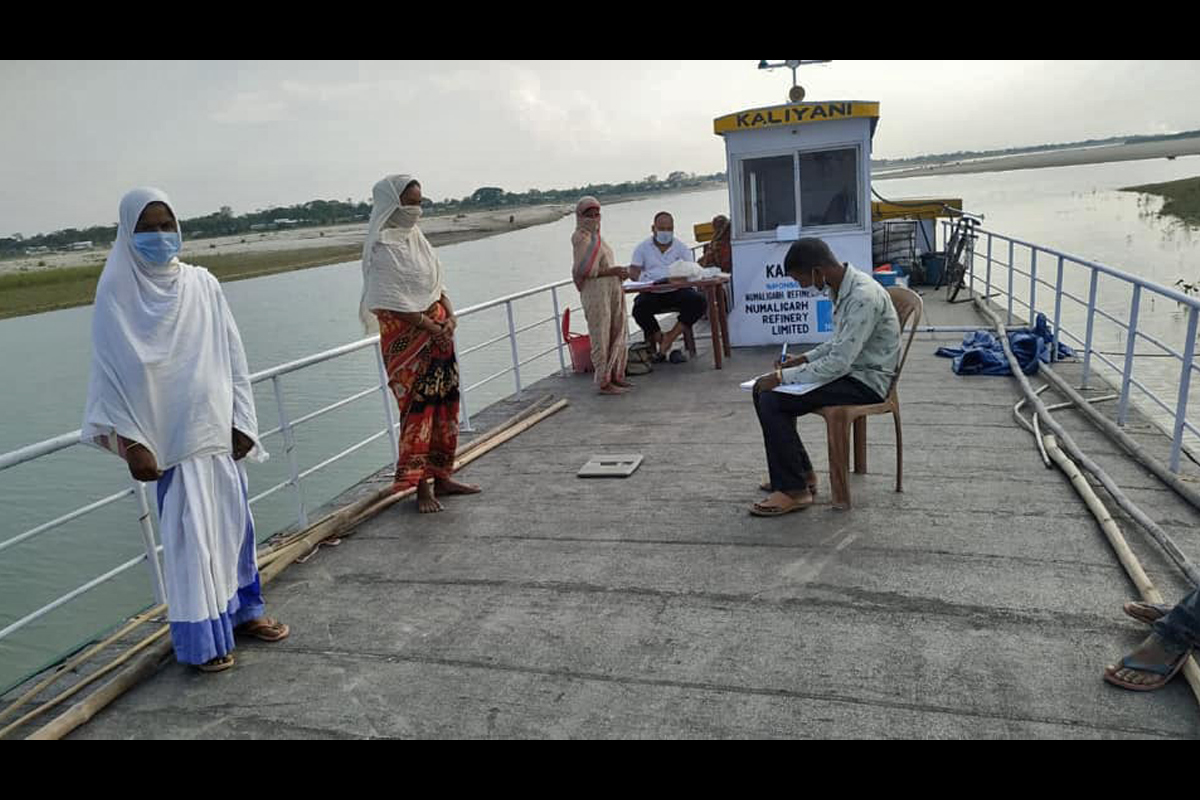 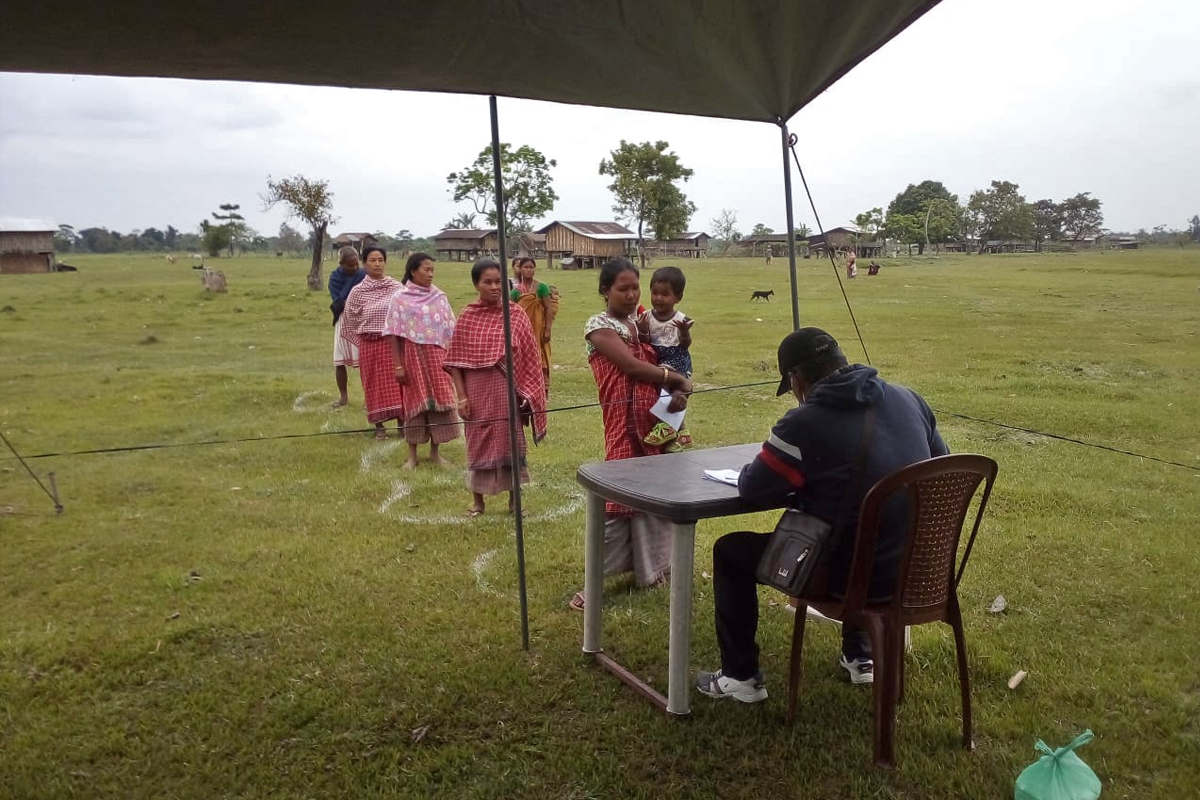 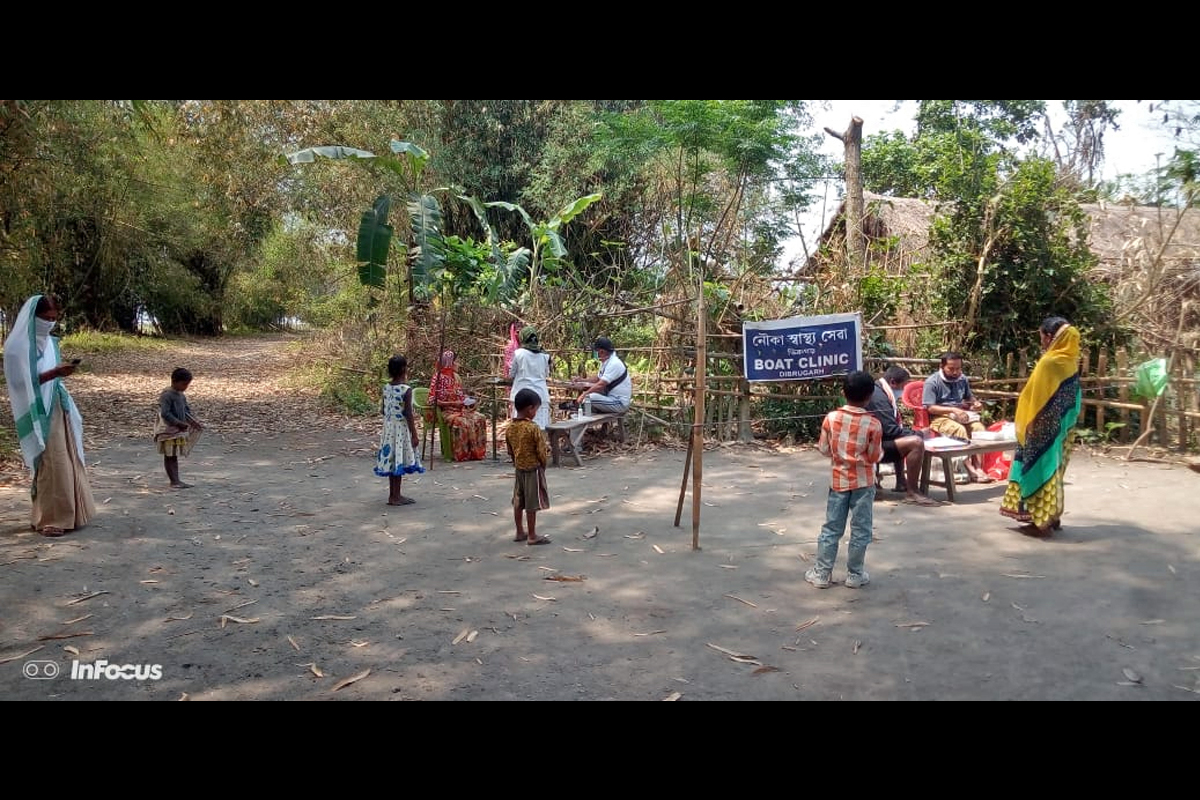 Kripaljyoti Mazumdar, project officer at ASDMA tells Mongabay-India, “As per the guidelines this year, new relief camps are to be identified as per population density. Also, instead of 3.5 sq m which was the norm earlier, this year 7 square meter has been notified for each person sheltering in relief camps. There will be a provision of sufficient masks, sanitisers, and soaps in the camps. Also instead of weekly (earlier), daily monitoring of every person’s health will be carried out.”

Meanwhile, ASDMA has also launched an initiative called ‘Pratirodhi Bondhu’ under which a cadre of volunteers has been trained to help the frontline workers with non-medical activities. Mazumdar says the initiative is a huge success with 14,000 people from across Assam registering themselves for the cause.

“Even well-known people like boxer Shiva Thapa and bodybuilder Golap Rabha have registered themselves as Pratirodhi Bondhus. Their primary objective is to spread awareness about COVID-19 among people. In districts like Golaghat and Darrang, they have helped people to maintain social distancing in crowded places like markets and banks. They also provide counseling and emotional support to vulnerable groups like elderly and children through telephonic conversation during the crisis” he says.

Mazumdar says while ASDMA doesn’t work with the boat clinics directly, they definitely co-ordinate during the flood.

Read more: Wildlife and people work together during Assam’s annual tryst with floods

Banner image: Residents of a riverine island visit a boat clinic on the banks of river Brahmaputra in Assam during the lockdown. Photo from Jorhat Boat Clinic.