Coexisting with an increasing number of Asiatic lions

India’s lion census, supposed to be conducted in the first week of May, has been deferred because of the COVID-19 pandemic. But there is little doubt that the number of Asiatic lions in Gujarat has risen since the last count in 2015. Over 50 percent of the country’s lion population currently lives outside a protected area (PA).

Wildlife experts have emphasised that it’s unrealistic to expect free-ranging lions to ‘adjust’ and live together in a small space. Since the protected area is at maximum capacity, it’s only natural that they wander farther in search of territory. How then should humans deal with the increasing population of an endangered carnivore that needs almost 10 kg of meat every day? Do we suspend human development in the name of conservation; should we expect them to live in harmony with us in our high-rise apartments?

With a different take on harmonious coexistence, Stotra Chakrabarti, Post-Doctoral Research Associate, University of Minnesota, says, “It is not easy to live with a large carnivore in your backyard. Coexistence can vary from tolerance to co-occurrence with grudges.” He mentions that according to the 2015 lion census, the lion population grew by 126 percent outside the Gir Protected Area, concurrent to around a 19 percent growth in human population in Gujarat. A consistent growth in lion population would have serious implications for humans and lions, and the efforts to conserve the latter.

Researchers say that a holistic approach to conservation is necessary in the long run, one that considers human development alongside lion conservation. Wildlife biologist Ravi Chellam, CEO, Metastring Foundation, says, “Carnivores like lions and tigers can’t live in multi-storeyed apartments; they need habitat. Lions can’t be a part of the city and village landscapes. It’s easy to say ‘these people like lions’ but lions are large, dangerous animals. They need 8-10 kg of meat a day. Where are they going to get it?” The current answer: livestock.

The lion’s dependence on livestock

Is letting lions prey on livestock a permanent solution? While Gujarat has enough livestock to go around, a recent report by the Wildlife Institute of India (WII) shows that the number of villages where lions kill livestock is increasing by about 100 each year. If compensation isn’t revised regularly and its distribution isn’t as prompt as it is now, pastoral farmers will suffer severe losses and may not be as tolerant of lions anymore.

While humans currently coexist with lions, increased interaction between the two could be detrimental to conservation efforts. Research shows that lions outside the protected areas (PAs) have a learnt behaviour towards humans. They can navigate market places at night, find carcasses at gaushalas (cow shelters), avoid humans, and more. The tendency to just scavenge can be particularly detrimental as some cubs may not learn how to hunt because they have access to a steady stream of readily available carcasses. Chellam, who has done in-depth research on the Asiatic lions, adds, “The threats from diseases increase drastically when lions scavenge on livestock carcasses which may have died from disease. Dogs also tend to feed on these carcasses and if they carry any infections, they can transmit them to lions.”

Chakrabarti, who has spent seven years doing fieldwork at Gir, explains that lions prey on livestock because forest patches that can support wild ungulates are too few in human-dominated landscape and livestock is the most readily available prey “This brings them in direct conflict with humans and their property. The study by the WII shows that lionesses in human-dominated landscapes need a minimum of 4 sq km of sacrosanct forest patch to rear cubs in concealment. So, for long-term persistence of lions in this landscape, it is imperative to safeguard such forest patches.”

He suggests creating more lion-safe areas, if not protected areas. “The WII’s Lion Ecology Project has delineated these patches, and some sort of legal protection should be immediately bestowed on them so that they do not get converted to agricultural land or development zones.”

Conservation that keeps humans in mind

Conservation has to keep both humans and wildlife in mind, indicates Chellam who says that conservation strategies can’t solely focus on a particular species as they don’t live in a vacuum. “If you don’t conserve and manage the entire habitat, conservation efforts are bound to fail.”

Talking about maintaining the lion’s habitat, Chakrabarti says, “Linear infrastructure, like roads and railways, in particular, should be carefully planned or diverted so that they do not intersect important habitat patches and corridors. However, building roads and railways cannot always be compromised. In such cases, underpasses should be considered.”

Asiatic lions, unlike their African counterparts, don’t view humans as immediate threats. Researchers have observed that unless provoked, starving, or approached when with cubs or while mating (in which case they tend to be more aggressive than usual), they avoid humans. This behaviour, they theorise, is a result of being nurtured by humans.

In the early 20th century, there were but a dozen lions left due to drought and excessive hunting before the then Nawab of Junagadh stepped in and decided to protect them. As a result, their numbers have risen over the years. This relationship, while astounding, is now heavily romanticised. There is no guarantee that the big cats will not hunt humans, especially if their population continues to increase in limited space.

Read more: India’s flipflop on the lion and cheetah

Yadvendradev Jhala, Dean, WII, says, “The lion population is expanding to areas where they were extirpated hundreds of years ago. In these areas, people do not have the cultural tradition of living with large carnivores. The lion density is low in the larger Saurashtra landscape right now, but if this increases, livestock kills and injuries to and death of humans will increase, and people will no longer remain tolerant. Retaliation by humans will eliminate lions from the landscape.”

Mainly found in Junagadh, Amreli, Gir Somnath and Bhavnagar districts, the lions can now be spotted in at least four other districts. Chakrabarti says that coexisting is inevitable if the population keeps increasing. “It is important that sensitisation and outreach are properly done so that people learn how to share space with them. Small changes in lifestyle can reduce interaction and conflict. Lions in this landscape provide an excellent opportunity to enhance livelihoods of locals by being adopted as wildlife trackers, vanyaprani mitras, and also through tourism.” 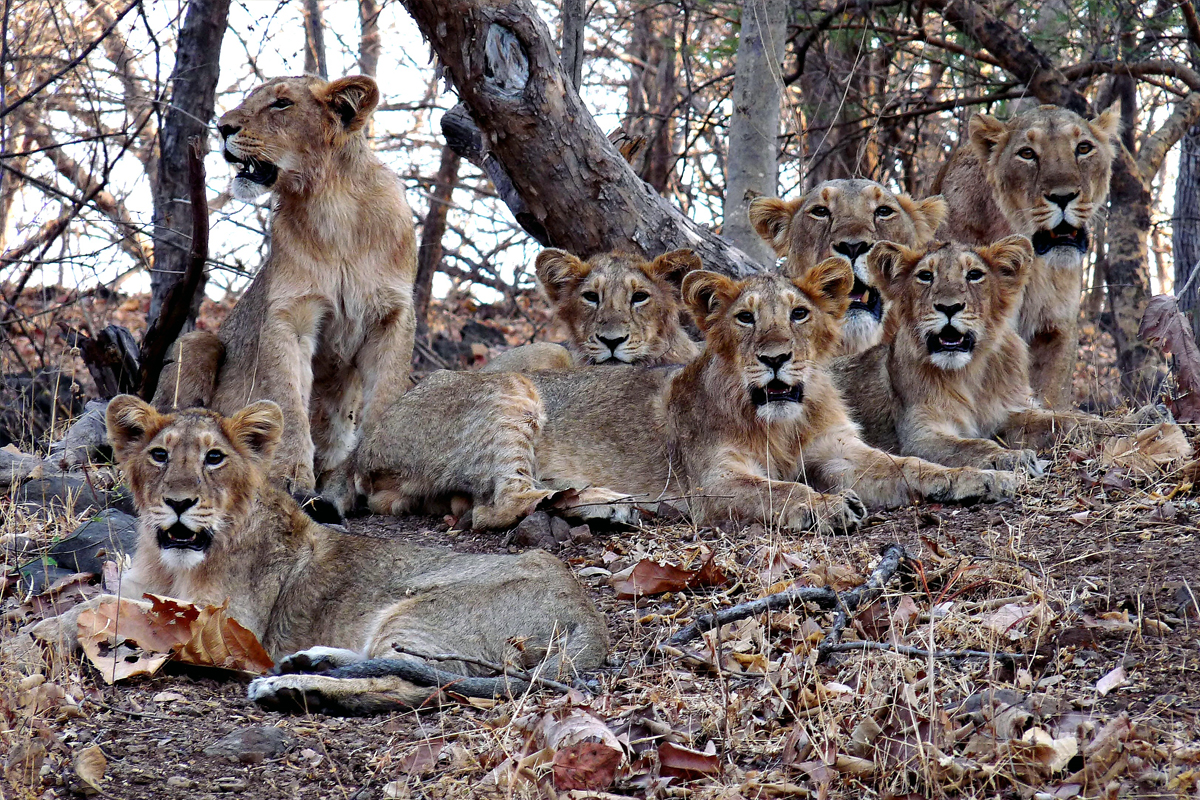 Mainly found in Junagadh, Amreli, Gir Somnath and Bhavnagar districts of Gujarat, the lions can now be spotted in at least four other districts. Researchers believe that an approach that considers human development alongside lion conservation is essential. Photo by Strota Chakrabarti.

Standing orders for plans to relocate the lions

Another problem of having lions in a human-dominated landscape is their close interaction with feral dogs and cats. “A Canine Distemper outbreak killed over 20 lions in 2018. Feral dogs act as reservoirs for this virus and can have deadly consequences, in epidemic proportions, if the disease spreads among wild carnivores like lions. Feral dog and cat populations need to be kept in check/vaccinated to thwart disease spillovers,” says Chakrabarti.

An epidemic or natural calamity could potentially wipe out the endangered species, which is why Chellam worked on the translocation project for the lions since the 1990s. It’s another thing that the plan to move some of the lions to Kuno Palpur wildlife sanctuary in Madhya Pradesh is unable to cross bureaucratic walls. There is a standing order by the Supreme Court dated April 15, 2013 saying the translocation be completed in six months.

Jhala’s stance on relocation and conservation is slightly different, “The only secure area for lions is Gir PA. There, only 250 sq km is exclusively for wilderness and lions (the national park). We have people and livestock sharing space with lions in the remaining 1,200 sq km of the Gir sanctuary. So, in the entire world, there is only 250 sq km for Asiatic lions! Kuno, on the other hand, has freed 700 sq km of people and livestock for lions to be reintroduced there.

“The higher the lion populations in national parks and larger the parks, the safer the lions will be. If Gujarat doesn’t want to give lions to MP, they should create a 1,000 sq km national park in Gir for lions. And introduce a lion population in Barda after resettlement of all villages from inside Barda wildlife sanctuary,” he added.

Chellam is of the opinion that India tends to separate people from wildlife. “Let’s assume that’s an acceptable strategy. You can do it within a PA. How will you do it outside? Are you going to throw everyone out?” Now, those who were thrown out of PAs, in the name of conservation, are wondering why the animals are also out with them. “You can’t separate our legal framework from conservation efforts. That recognition has to come. Conservation has to be humane and just. It cannot undermine the dignity and constitutional rights of large sections of our society.”

Banner image: A pair of lions laze in a groundnut field. Photo by Stotra Chakrabarti.