“Forests are protected areas in name only. Sometimes we see better protection of biodiversity in the adjacent agricultural lands,” said C.S. Saneesh, a research fellow at Spatial Interaction Ecology Research Group at the Martin Luther University, Halle-Wittenberg, Germany. He drew this inference from a recent sighting of a rare toad – the Duttaphrynus hololius or Gunther’s toad – in the rock pools of the 200 square km farmlands in the Anantapur district in Andhra Pradesh.

Saneesh, along with his colleague Anil Sarsavan, was doing an amphibian survey for the Foundation for Ecological Security, to assess the impact of the watershed activity by NABARD (National Bank For Agriculture and Rural Development) at the Somrajkunta village in Anantapur.

Range-restricted, Gunther’s toad, also called Malabar toad or rock toad, is endemic to the Deccan Plateau and the Eastern Ghats. This sighting was surprising considering this amphibian is a lesser-known species. Shy and elusive, these toads are nocturnal and are picky of their habitats. They breed only in the undisturbed rock pools exposed to direct sun. “Even a slight disturbance to their habitat would send them scurrying,” said Saneesh. Any trees or shade around the pool are not preferred. The pools where the researchers spotted the toad were on the rocks about 10 metres above the ground — an ideal habitat for the toad.

These sightings were significant for various reasons. For one, Saneesh spotted about 30 of these toads in the farmlands while he couldn’t spot even one in the forest (Kadiri Reserved Forest) nearby.

“In the name of protection, a lot of work was going on in the forest which was not ideal for these toads to breed,” he said. Upon talking to the villagers, he understood that those rocks on the farms have been kept undisturbed by the villagers just so the toads and other creatures dependent on that habitat, survive. “The villagers have taken a conscious decision to forego additional income from using harmful agricultural methods like tractors that would destroy these rock pools. Instead, they use the native Hallikar cows whose maneuvering, according to villagers, ‘will only awaken the soil, not slaughter like a tiller’,” Saneesh said.

These semi-arid, savannah grasslands are community managed. The informal village committee has taken many decisions for the betterment of all stakeholders, including animals and birds. Mostly small landholders, they use sustainable farming methods and maintain a diversity of crops. Seasonal farming is done to minimise the use of pesticides and water. These decisions are taken at the community level. “It’s an informal committee of villagers who have taken smart decisions to maintain certain traditional ways of doing agriculture,” Saneesh said.

India needs its farmers to protect its biodiversity

One of the 17 megadiverse countries in the world, India contributes to eight percent of the world’s biodiversity. In protecting this biodiversity, India has so far taken good strides. With a string of legislations favouring conservation, India protects close to five percent of its land while approx 15 percent of global land is protected.

However, nature conservation is often seen through the narrow lens of protected areas and follows a paradigm that any kind of human interaction is detrimental to conservation. This theory has constantly been punctured by stories from outside protected areas where local communities not only cohabit with animals and birds that make these lands their habitats but also facilitate species conservation through community-level decisions that favour it. This is apparent from examples around the country like the Bishnoi community in Rajasthan that fiercely protects the blackbucks and chinkaras or the Kokkare Bellur village in Karnataka that takes care of spot-billed pelicans.

Agricultural lands across the country form ideal habitats for various species, mostly amphibians, and birds. “In theory, wherever there are more humans and more anthropogenic activities, there are fewer species to be found. But our work around ponds and wetlands, which are unprotected areas, has shown a contradiction to this. We have found more than 400 species of birds, the largest population of nilgai, foxes, wild cats and more, in farmlands in Uttar Pradesh (UP), which are not agroforestry. Gujarat and Rajasthan too have shown similar results,” said K.S. Gopi Sundar, a scientist at Nature Conservation Foundation and the global co-chair of the IUCN Stork, Ibis, and Spoonbill Specialist Group.

“Wetland management in India suggests removing humans from that area but in reality, human presence has found to have a positive effect on species presence and diversity. From our survey of unprotected wetlands in U.P., we have found western U.P. to have the highest bird diversity of any cereal farmlands of the world,” he added. Woolly-necked stork population, thought to have a global population of 35,000, is about 2,00,000 in South Asia, said Sundar.

At the root of these local conservation efforts are traditional, local knowledge experiences and systems that have been passed down through generations. Many studies have been done on how communities come together to protect birds heronries in agricultural areas like Kokkare Bellur, Koonthankulam, Teelinilapuram, etc., said T. Ganesh, senior fellow, Ashoka Trust for Research in Ecology and the Environment (ATREE).

“Some of these have become community reserves or sanctuaries. Basically, villagers conserve these species because there is some belief that they bring prosperity in the form of good rains and they also show a great sense of pride in protecting them,” he said. Gopi Sundar recounts an incident where he had to face a group of angry villagers with sticks when he ventured into a wetland to count the nests and eggs of sarus cranes revered in U.P. due to its mention in Mahabharata as Krounca. “They feared I was stealing eggs,” he said.

During her research on the coexistence of leopards and humans in villages of Hamirpur district in the Himalayas, conservation psychologist at Wildlife Conservation Society, Dhee, found that the villagers relate to wild cats as “thinking beings” with whom they can “negotiate” space with, a language that’s not used often in modern conservation. But recognising an animal as a person or a being is a traditional practice in India that has survived the test of time and rationality.

Locals take up conservation for various reasons that range from the revival of a natural resource and an affinity for a particular species to watershed management or simply for ecological benefits. Sundar narrates that when shallow wetlands in some areas in U.P. dry up during summer, villagers congregate around them to remove the topsoil that makes for excellent clay. “It may seem to a third party as a damaging act but in reality, this tradition helps these wetlands bounce back to full life the next season,” he said.

In Anantapur village, the village committee has asked shepherds to lop the trees in such a way that the branches are not fully removed from the tree but are let to hang on the skin. This is done so branches don’t dry out completely and can still bear leaves that could be fodder for other animals and organisms. “If there are four trees on the farm, one is left untouched for pollinators and seed dispersers to do their duties. Only the other three are lopped,” Saneesh said.

Time to redefine farmlands’ worth in conservation

Experts believe that considering the rich biodiversity seen in agricultural lands, it is time that these lands are seen as systems that contribute to ecology than just areas for food production. Accepting that the Indian countryside is unique and that local hands play an important part in keeping them that way will also help us understand biodiversity conservation better in the Indian context.

Ganesh feels that India is strong in its policies but needs proactive governance inclusive of people concerned. “In many places where heronries have been protected by people for centuries, state takes control, promising benefits but rarely do these trickle down to people. This can make people indifferent to biodiversity,” he said. According to him, there is a need to build greater awareness even in villages where there has been a tradition of protection. “The newer generation does not often pay attention to village elders but if a third party says the same, it has better results. Long-term engagement of local NGOs with these issues is essential,” he said.

From her studies, Dhee has come to the conclusion that before any external agency gets involved in conservation in these rural lands, they need to have a good understanding of the local sentiments towards the animals that they share space with instead of assuming what their attitudes could be.

Since the existing local institutions and associated laws are strong, Sundar feels a need for the enforcement to be strong and to weed out corruption. “For ‘habitats’ that are important to both birds and farmers, renewing the old panchayat system where traditional common lands are inviolate from commercial schemes is vital. Enforcing this existing law, that has been strengthened by multiple court judgments, will help the most marginalised people while ensuring that birds continue to enjoy living amid farmlands,” he said.

Read more: There are Sarus cranes in my paddy fields: changing community perceptions to conserve the threatened bird 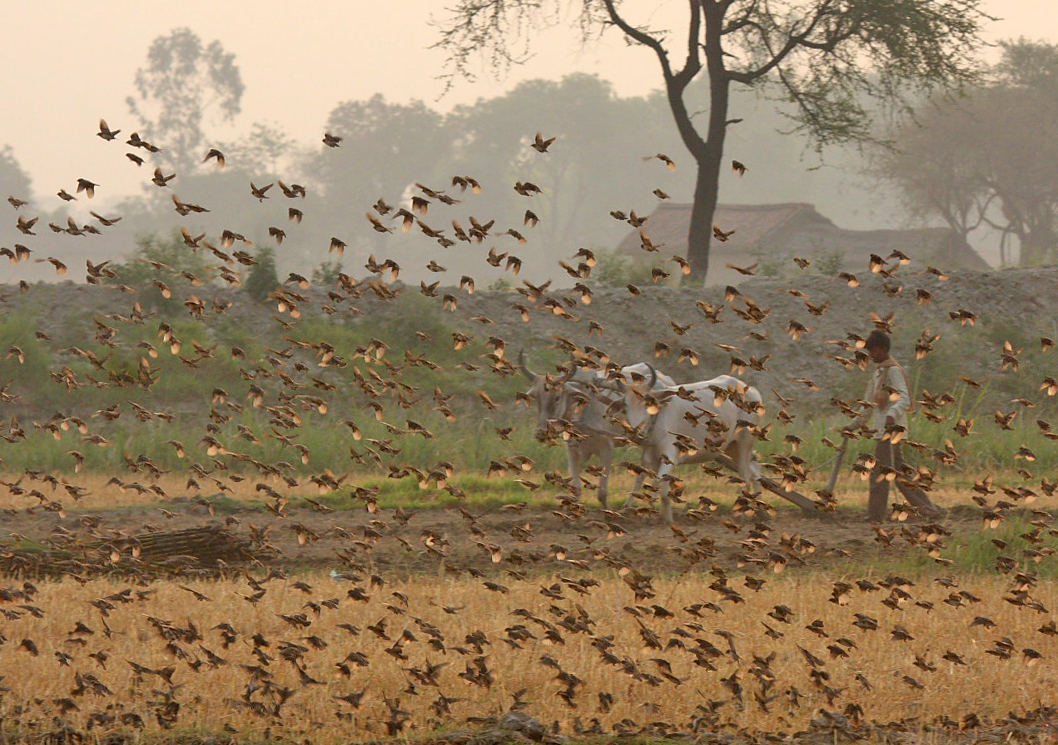 Black-breasted weaver flock on a farm in Uttar Pradesh. Photo by Gopi Sundar.

Banner image: A pair of sarus cranes in a wheat field in Uttar Pradesh. Photo by Gopi Sundar.