by Azera Parveen Rahman on 30 September 2020

In Guneri, Kutch, there is a belief that many years ago, when the Indian subcontinent was not as fragmented, a Sufi saint had come to the region and planted two sticks in the ground. Here, in the space between, flourished inland mangroves that are absolutely disconnected from the sea, making it one of the very few places in the world to sustain such a unique ecological feature.

For the locals of the village, however, these mangroves are more than ecologically significant. “We deeply revere these mangroves; they have sustained us through many droughts,” Jadeja Devaji Negrajji, or as he is more popularly known — Deva bhai — said. Cutting of these trees, therefore, is prohibited and Deva bhai leads Guneri’s efforts in protecting these mangroves.

Mangroves, by definition, are small shrubs or trees that grow in saline or brackish water, and are found in coastal areas. The mangroves of Guneri and also of Shravan Kavadia, both in Kutch, however, are completely landlocked and are therefore unique. “They (Kutch’s inland mangroves) are in fact among the very few, maybe three-four, of their kind recorded in the world,” G. A. Thivakaran, chief principal scientist of the marine and coastal ecology division of the Gujarat Institute of Desert Ecology (GUIDE) said. The others are in Brazil, Peru and South America.

The scientific history of these mangroves and how they came into being is as interesting as the story of Kutch itself. Experts say that about two millennia back, the Rann of Kutch was a shallow sea. Over the years, as the water started receding, the dried land lifted up due to tectonic shift. The Arabian sea receded by 100-150 kms from the coastline, resulting in the inland mangroves of Guneri and Shravan Kavadia which survived because of continued supply of brackish or saline water underground. Experts therefore believe that these mangroves belong to ancient biogenetic pools. The good underground supply of brackish water helps in dispersal of seeds and propagation.

Among the two, the Shravan Kadavia grove has been degrading rapidly. “The Shravan Kavadia grove was 30-35 hectares in size; until three years back, only about 13 hectares have remained,” Thivakaran told Mongabay-India, “It has stopped regenerating; propagation has stopped.”

A major chunk of the Shravan Kavadia groves was destroyed in the 1998 cyclone, and the rest by an attack of the wood borer pest. Thivakaran added that it could also be that the underground supply of brackish water may have been cut off. “The exact reason is not known—it could have been because of human intervention, climatic changes. A detailed study is required,” he said. Guneri, however, is a different story. 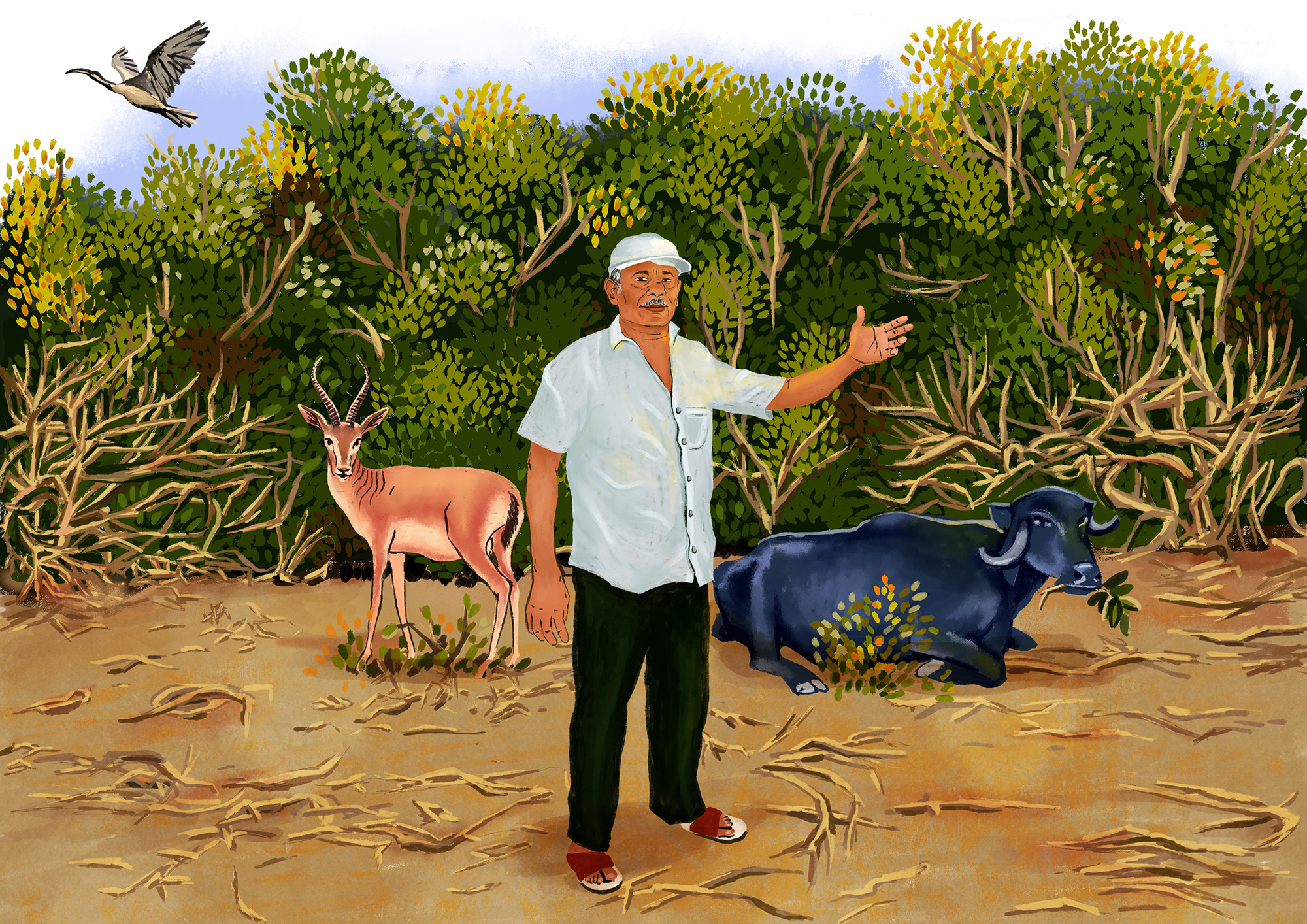 Deva bhai, from Guneri, has been leading community efforts to prohibit the cutting of the mangrove trees and prevent wildlife poaching. Illustration by Neethi for Mongabay.

Guneri’s mangroves: a story of survival

Although much smaller in size than the Shravan Kavadia grove—Guneri is only about five hectares, spread in four locations and is flourishing. And the local community led by those like Deva bhai is playing an important role in its protection.

“Around two or three years ago, people from other villages, like Lakhpat and Umarsar, started coming here to cut the trees of the mangrove for firewood and other purposes. Somebody from our villages informed me and we immediately put a stop to that,” Deva bhai told Mongabay-India. “After that, I sent some people to their villages to tell them that cutting the mangrove trees is strictly forbidden and that they should never attempt it again.” No such case has been reported ever since.

The mangroves of Guneri are tall trees—20-25 feet in height—and make a fascinating feature amid the semi-arid landscape of Kutch. Most of these trees, say Thivakaran, are of the Avicennia marina species that are known for their hardy nature, ecological versatility, and long life.

For the locals of Guneri village, however, their conservation efforts are more deep rooted. They believe that the mangroves are there to protect them and in turn, so should they.

“We, in Kutch and in Guneri, are mostly pastoralists. Like most others, I have cows and buffalos too as my source of livelihood,” Deva bhai said, “Now, Kutch has a drought every three-four years. The land becomes bone dry. During this time, we depend on the mangrove for leaves that our animals can feed on and survive. If our animals live, so do we. This is how the mangrove sustains us in the worst of times.”  Maldharis, members of a nomadic community which rears livestock like cattle and buffalo, are allowed to graze their animals in the mangrove forest, “but not a branch is allowed to be taken to be burnt as firewood”. “It takes seven-eight years for these trees to grow and just a few minutes to cut or destroy them. So it’s important for people to understand the consequences of destroying these trees,” he said.

The mangrove patch in Guneri also supports a variety of fauna. There are deer, blue bulls, jackals, a wide range of birds, including migratory birds that come here every winter. The locals, therefore, keep an eager eye out for poachers, and the Maldharis in particular keep a track of any suspicious activity, especially at night.

On their part, the Gujarat State Biodiversity Board, had, in 2011-12, identified different technical groups to form Biodiversity Management Committees (BMCs) in different Panchayats. The aim was to train and involve the local community in conservation efforts. Sahjeevan, an NGO in Bhuj, was one of the organisations selected, and it chose Guneri, among others, to form a BMC for the conservation of flora and fauna, including the inland mangrove.

“The Guneri BMC, of which Deva bhai is also a member, was trained on biodiversity conservation,” Pankaj Joshi of Sahjeevan told Mongabay India. “The members were made aware that no development activity should be allowed near the mangroves, and the groundwater should not be disturbed in order to let the mangroves continue to thrive.” The BMC then formulated the rules: Maldharis were allowed to graze their animals, signages were put up near the village about the significance of the mangroves and cutting the trees was prohibited.

The traditional beliefs of the locals, along with this awareness, have strengthened Guneri’s conservation efforts, said Joshi. Deva bhai, for example, regularly interacts with children in the local school and takes them to see the mangroves, “about three-four kilometres from the village”. “I tell them that these mangroves are a part of our rich heritage. Usually, mangroves are directly connected to the sea, but these are not and that makes them unique in the whole world. It’s a matter of pride for us,” he said.

Thivakaran feels that the forest department is still not doing enough to conserve these inland mangroves. “We had asked for permission to study the Shravan Kavadia mangroves but the forest department kept delaying it. Whatever study is there is very preliminary. Guneri is doing much better but I think more detailed research needs to be done,” he said.

Sahjeevan and Guneri’s BMC, said Pankaj Joshi, had approached the State Biodiversity Board to declare Guneri’s mangroves as Biodiversity Heritage Site. In 2018, according to reports, the biodiversity board did take forward this proposal. But there has been no further news on that. Meanwhile, Sahjeevan continued to support the conservation efforts, taking the help of Tata CGPL’s CSR initiative.

Whoever be the external players, it is the local community that has coexisted with these mangroves for so many years. And as they stand guard, protecting, revering this unique ecosystem, hope stands tall in Guneri.

Illustration by Neethi, an independent illustrator, muralist and surface pattern designer based out of Bengaluru, who loves drawing all things dreamy, inspired by nature and life.