Anamika Oraom, 16, of village Dungridih, around a kilometre away from Narwa Pahar uranium mine in Jharkhand, wants to study. But she cannot, owing to severe headaches that come up periodically, triggered by a malignant tumour on her face. Sanjay Gope, 18, cannot walk and is confined to his wheelchair. Haradhan Gope, 20, can study, walk, talk, but owing to a physical deformity, his head is much smaller in proportion to his body.

There are many more, young and old, in the village Bango, adjacent to Jaduguda uranium mine in Jharkhand, whose lives and death highlight the ill-effects of uranium mining, say the villagers.

Uranium is a naturally occurring radioactive mineral and is vital to India’s nuclear power programme. At present (till August 31, 2020), India’s installed nuclear power capacity is 6780 megawatts (MW). The country aims to produce 40,000 MW of nuclear power by 2030.

The Uranium Corporation of India Limited (UCIL) is involved in the mining and processing uranium ore in the country. According to the UCIL, mining operations at Jaduguda began in 1967, and it is India’s first uranium mine.

In the 25-kilometre radius of Jaduguda, there are other uranium deposits at Bhatin, Narwa Pahar, Turamdih, Banduhurang, Mohuldih, and Bagjata. While UCIL claims that Jaduguda mine has created a large skill base for uranium mining and the mining industry, local communities point out that their lives and land have changed irreversibly.

The villagers complain that the hills surrounding Jaduguda, dug up to create ‘tailing ponds,’ have proven to be a severe health hazard. A tailing pond is an area where leftover material is stored after the excavated ore is treated to extract uranium. Communities argue that these ponds have led to groundwater and river contamination.

Namita Soren of village Dungridih said, “This radioactive element has become a part of our daily life.”

Ghanshyam Birulee, the co-founder of the Jharkhandi Organisation Against Radiation (JOAR), said that villagers earlier marked certain forest areas as ‘cursed’ – a woman passing through the area was believed be affected by an evil gaze and suffer a miscarriage or people would feel dizzy. These areas coincided with the forest spaces around tailing ponds. In cultural translation, the regions surrounding tailing ponds became infested with ‘evil spirits.’ But as the people became more aware, they connected their misery to the mining operations.

A 2003 study by Tata Institute of Social Sciences emphasised that 18 percent of women in the region suffered miscarriages/stillbirth between 1998 and 2003, 30 percent reported some sort of problem in conception, and most women complained of fatigue and weakness.

When asked the reason for opposing the UCIL’s mining project, Birulee said, “Before mining started, people never used to have diseases like these – children were not handicapped, women were not suffering from miscarriages, people didn’t have tuberculosis or cancer. People had ordinary illnesses, cold and cough, that got cured by traditional medicines. But today, even the doctors are not able to diagnose diseases. It all emerged after uranium mining started.”

India has uranium reserves in Rajasthan, Jharkhand, Chhattisgarh, Meghalaya, Telangana, Andhra Pradesh, and Karnataka. It is currently operating mines in Jharkhand and Andhra Pradesh. The country has a detailed plan to become self-sufficient in uranium production by achieving a nearly ten-fold rise by 2031-32, including expansion from existing mines and opening new mines. However, to augment supply until then, it has signed a long-term contract with Uzbekistan (in 2019) to supply 1,100 metric tons of natural uranium ore concentrates during 2022 -2026. Similar agreements have been signed with overseas suppliers from various other countries like Canada, Kazakhstan, and France to supply uranium ore.

No help from the government or politicians

Birulee feels that the political class is aware of the problem but that has not translated into safeguarding villagers’ lives. “Whoever is elected from here – legislator or parliamentarian – has never raised our issue about radiation either in the state legislature or parliament. If they raise our issue, I am sure the government will take some action to resolve people’s issues,” said Birulee.

Rudy asked whether the central government has reports of hazardous activities like radioactive slurry being stored in the open, causing health hazards to people residing in adjacent areas of uranium mines in the country, and, if so, the action taken on it.

While replying to the question, Minister of State for Personnel, Public Grievances and Pensions and Prime Minister’s Office, Jitendra Singh, refuted any such impact. He said that during the recovery of uranium from the ore in a uranium mill, tailings containing low-level radioactivity get generated, which are transported to tailings pond in the form of a slurry.

“The tailings ponds are engineered valley-dam structures, which are under continuous radiological surveillance. In the tailings pond, the solids settle down, and the supernatant liquid is routed to an Effluent Treatment Plant (ETP). Only treated effluents conforming to discharge limits are discharged into the environment. After extracting the uranium from the ore, the coarse fraction of the tailings is backfilled in mines, and remaining treated tailings in the form of slurry is stored in an engineered tailing impoundment facility (tailings pond). The effluent from the tailings pond is further collected, treated, and reused in the process. The remaining of the treated effluents is monitored to ensure that they meet the regulatory limits before discharge to the environment,” said Singh.

He added that regular environmental monitoring around the uranium mining facilities is carried out to ensure that the mining operations’ impact in the surrounding areas is negligible. “The population residing around such facilities has not been found to have any health hazards due to associated radioactivity in the tailings,” Singh emphasised.

“In addition to regulatory inspections, special inspections are also carried out on a case-to-case basis … Radiation doses of occupational workers in uranium mines are found to be well within the dose limits specified by AERB,” Singh added.

Birulee reflects on the opposing conditions that he has witnessed. For him, it is impossible to leave behind his land, livelihood, and traditions. But for people close to the mines and tailing ponds, “the only solution is that from this region – from this radiation zone – people should be rehabilitated to a safer place. Else they’ll be surrounded by the same problems.”

The people note that displacement and then deforestation for uranium mining robbed them of their land and livelihood, and later cursed them with health impacts.

Though the company and those in power deny any ill-impact on local ecology and livelihood, locals alleged that small-scale production of bidis is also hampered due to the low quality of tendu leaves. They suspect that the trees have been exposed to contaminated groundwater.

Villagers said that with expansion of mining large tracts of sal, sarjom, and teak trees are being wiped out. The trees are essential for the communities’ sacred rituals and traditional activities.

Ashish Birulee, photojournalist and member of JOAR, said that the route for transporting uranium ore is the same used by the public. He says the resulting pollution from the dust has a long-term impact on health and ecology.

Ashish adds that the mining company cannot ignore the most significant factor – the experience of people living in this area. “The experience of people is nothing less than any study or research. It can’t be denied. UCIL is not ready to admit that there are problems. It is because if it admits it would have to compensate people. Peoples’ experience shows that before 1967 there were no such issues, but it started after mining took off. If you look at the population of Jaduguda, there are a lot of people with disabilities. But if you go about 15 kilometres away, there are no such problems.”

“As far as a solution is concerned, once you start mining at any place, there is no solution. The company will mine here till the uranium ore exists. It has a lease for 45-50 years and after mining is over here, it will move to a new mine and extract resources. But the mining waste will be left here,” said Ashish.

“The company (UCIL) needs to accept (the problem) and compensate those affected. They also should take lifetime responsibility of managing the waste here,” he added.

While tribal communities and civil society groups continue to highlight environmental and health hazards due to uranium mining, UCIL dismisses such reports. It states that “various studies carried out by experts have proved beyond doubt that the diseases prevalent in the villages around the UCIL workings are not due to radiation but attributed to malnutrition, malaria and unhygienic living conditions, etc.” 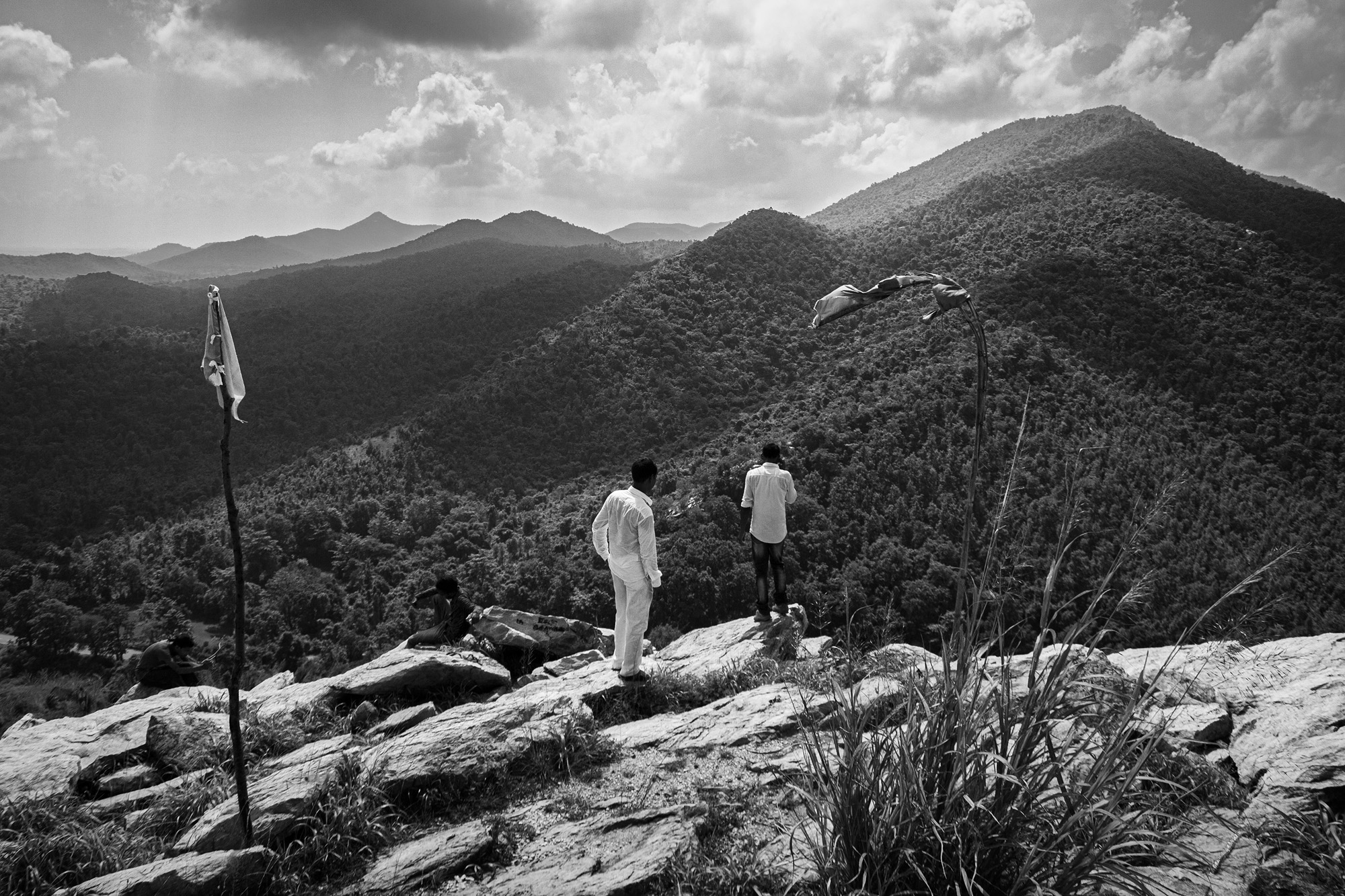 The hills of Jadugoda have been mined for uranium since 1967. Villagers argue that instead of developing lives, the oldest uranium mining region has witnessed extensive health and environmental damage. Photo by Subhrajit Sen.

“Statistical data at regular intervals reveal no significant effect on ground and surface water bodies due to UCIL activities. Similarly, up-take studies on more than thirty species of different groups (plant & animal) show that that there is no significant change in background radiation due to UCIL operation,” UCIL emphasises.

Its website has a section of frequently asked questions to dispel and dismiss reports about environmental hazards and safety of tribal communities living around uranium mines.

An email sent to the UCIL seeking their view on environmental and health hazards due to uranium mines remains unanswered.

Photos: The rich Hasdeo Arand on the road to become a ravaged Korba?

Banner image: Haradhan Gope helping his father in a paddy field. The 20-year-old suffers from a facial deformity. Photo by Subhrajit Sen.