Riverbank erosion along the Ganga is becoming a frequent affair in West Bengal’s Murshidabad district. However, this year, the erosion also took place in villages that hadn’t seen such erosion in decades or possibly ever. In Samserganj block of Murshidabad district, the erosion that started in August this year washed away homes, temples, a school and agricultural land.

For many residents of three villages of Samserganj block, along Ganga riverbank, Dhanghara (Nimtita gram panchayat), Dhusaripara (Nimtita gram panchayat), and Natun Shibpur (Chachanda gram panchayat) the erosion was a new occurrence. According to Pradip Chakraborty, Executive Engineer, Ganga Anti Erosion Division, Murshidabad, “The erosion happening on Dhanghara, Dhusaripara, and Natun Shibpur is fresh erosion started in August. Around 2.7 km along the Ganga has been eroding over the past fifty days. We have no data of previous erosion in the past fifty years in this area.” Shyamal Kumar Mondal, Sub-Division Officer, Jangipur lrrigation Department, Murshidabad also confirmed that “there is no record of erosion in this area in past 60 years.”

Some locals and experts attribute the fresh spate of erosion at Samserganj to the obstruction of the natural flow of the river Ganga linked to the construction of the Farakka Barrage. This riverbank failure in Bengal districts such as Malda and Murshidabad, which started in the early 60s with the inception of the barrage project has been described as a “long-term natural disaster”.

According to the 2020-21 Murshidabad district disaster management plan, more than 65,000 households in villages of Samserganj block have been identified as vulnerable to flood, waterlogging and erosion.

The erosion started at Dhanghara village on August 12 this year. Torab Ali, 75, who lives in Dhanghara told Mongabay-India, “The first wave of destruction came on August 12 and a border outpost of Border Security Force (BSF) eroded into the river. On August 19, a second wave of destruction started around midnight and 395 houses of Dhanghara washed away within hours.” Ali further explained that this area never faced such erosion in past decades. “I saw how my birthplace, Hiranandapur village was eroded 61 years ago in my childhood. But this time the situation is so tragic. The erosion started so suddenly that many villagers did not even get the time to save their essential items from their homes,” he said.

In early September houses at Natun Shibpur eroded overnight and large tracts of agricultural land and mango-litchi orchards were also washed away. “Around 2-5 houses and agricultural lands eroded every alternate day. We have taken shelter in a local school and house of relatives. We received 24 kgs of rice and some essential items for now but we don’t know who will provide us food in the coming days and where we will go from here,” said Madhu Mondal, 64.

Fresh erosion was reported at Dhusuripara village from September 23. Locals claimed that at least 20-40 bighas of land drowned at a time and multiple cracks on soil appeared across Nimtita area that can be eroded anytime.

Amirul Islam, Trinamool Congress (TMC) MLA from Samserganj, said, “Around 3000 people of 627 families (in Samserganj) have been displaced in past two months. We provided food items and tarpaulin among these homeless families. Apart from this around 1200 acres of land washed away in this region. I spoke to the chief minister of the state and she’d announce a rehabilitation package soon for affected families.”

According to block development officer Joydeep Chackraborty: “Irrigation department officials made several inspection visits in affected villages and they have prepared a detailed project report on anti-erosion works in Ganga-Padma erosion and forwarded to higher authority.”

Prabhat Sarkar, a local of Dhusaripara said, “We cannot understand why the erosion started again in new areas. Farakka Barrage has been creating problems for a long time. There is a continuous swing of the river to the left and thereby a huge chunk of land is eroded away every year. We heard a large part of the barrage is open due to renovation works and the sudden discharge of water might affect us.” Apart from this, a few years back a guard wall was constructed near Dhulian crematorium to save the river bank. “Now natural flow of the river blocked due to the guard wall and as result fresh erosion started in Nimtita,” he added. 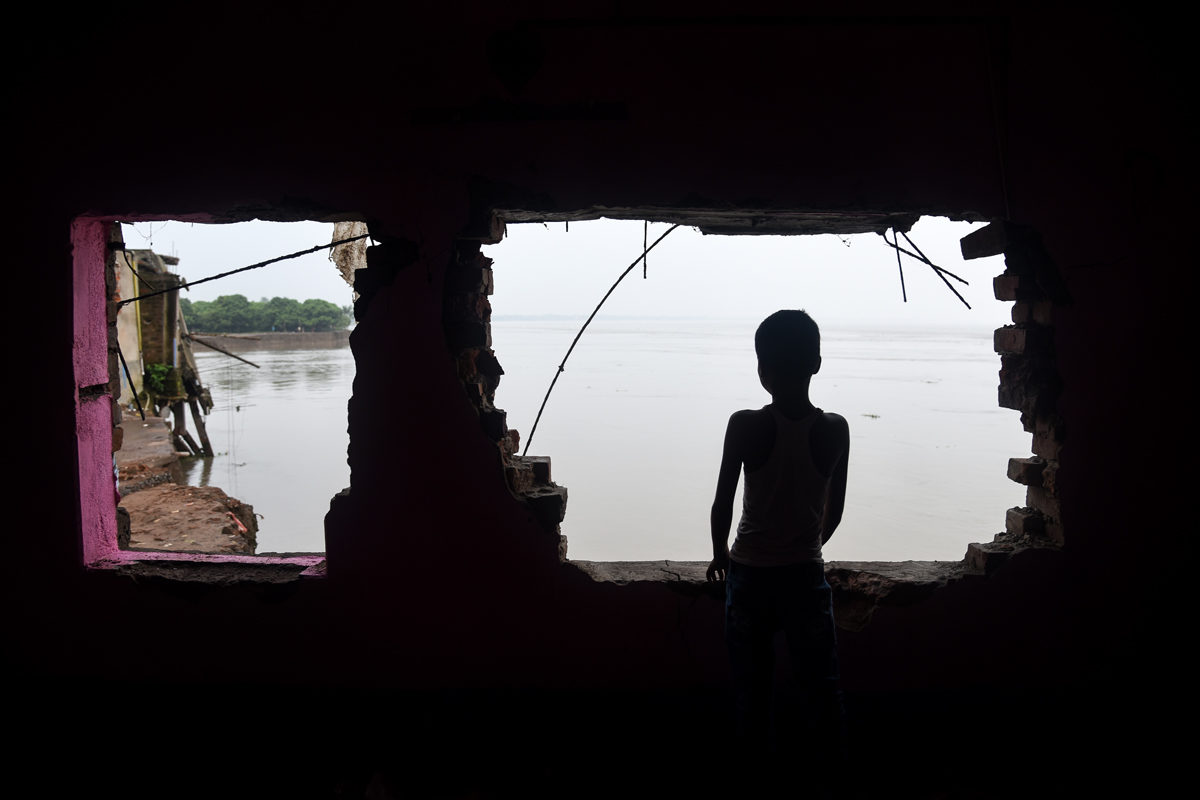 Grandson of 75-year-old Torab Ali watches the destruction of his three-generations-old house at Dhanghara. The village also witnessed the collapse of a school building. Photo by Tanmoy Bhaduri.

Murshidabad (town) was the capital of Bengal before the advent of the British. The river Bhagirathi, flowing from north to south through the district, divides it into two almost equal portions influencing geology, their characteristics, their agriculture and culture,

The main objective of the Farakka Barrage Project complex is to divert an adequate quantity of Ganga waters to Bhagirathi-Hooghly river system through a 38.38 km long feeder canal for preservation and maintenance of Kolkata Port by improving the regime and navigability of the Bhagirathi-Hoogly river system. The increased upland supply from Ganga at Farakka into Bhagirathi reduces salinity and ensures sweet water supply to Kolkata and surrounding areas.

Sugata Hazra, professor and former Director of School of Oceanographic Studies, Jadavpur University, Kolkata explained that the affected villages fall under the delta region of Ganga river in downstream of Farakka barrage. “Water storage capacity of the barrage has reduced in recent times. They (barrage authority) have to open their lock gates once there is heavy rainfall in North Bengal. As a result, unregulated water flow directly erodes villages on the right bank of Ganga,” he said.

Aznarul Islam, Geomorphologist and Head of the Department of Geography, Aliah University, Kolkata identified “fluctuation of river regime” as the main cause behind river bank erosion at Samserganj. “We observed several riverbank erosions after the construction of Farakka barrage at the upper stretch of Ganga in Malda district and at lower stretch in Murshidabad district. Water flow of Ganga increases downstream every ten days due to the controlled release from barrage that directly erodes lands during monsoon,” he said.

The local administration tried to protect the river bank with bamboo structures and sandbags but these aren’t adequate. Hazra elaborated that a river needs at least 3-5 km for its “playing”. People should understand the river well and riverbed shifts from time to time but people have settled on the riverbank since the British regime in this area, he said. In the case of Samserganj, the composition of the soil is very sandy in nature. So, there is a probability that erosion happens in the underground and large areas can be vertically drowned very fast, according to him. “Construction of embankment or putting sandbags and bamboo won’t be a long-term solution. Marginal communities will face more erosion in the coming days with changing climate (erratic rainfall, storms, floods) condition and people becoming climate refugees,” he said.

Sharing the same sentiment, Islam also said that anthropogenic pressure, land use pattern and climate change impacting the riverbank erosion in Ganga-Bhagirathi-Hooghly river system. “We have to adopt a sustainable human settlement plan along the river bank and use social engineering rather hardcore civil engineering to mitigate bank erosion,” he said.

Banner image: A house partially collapsed at Natun Shibpur village due to riverbank erosion along the Ganga. Photo by Tanmoy Bhaduri.