Oh My Gaur! Living alongside the Indian bison that’s moving out of forests

It’s not uncommon in India to see cattle grazing in farms and backyards, ruminating by the road, or even causing a minor inconvenience to vehicles. Replace cattle with herds of gaur (Indian bison) and you are likely to be in Coonoor, one of the taluks in the Nilgiris district of Tamil Nadu. In Coonoor and the neighbouring taluk of Kotagiri, gaurs come out of forests in herds and in many cases, graze, mate, and sleep in the vast tea plantations. They are soon becoming a tourist attraction in these hill stations otherwise known for the scenic landscape of emerald tea plantations interspersed with forest patches.

Gaur (Bos gaurus) belongs to the family of wild oxen and is the tallest living and the second heaviest among oxen. Considered the largest living bovine, the body length of gaur is usually 250-360 cms, with a height of 170-220 cms. Males may weigh between 1000-1500 kg and females between 700-1000 kg.

Included in the Schedule I of the Wild Life Protection Act, 1972 and listed as Vulnerable in the IUCN Red List, gaur’s estimated population is around 13,000 to 30,000 in the world with approximately 85 percent of the population present in India. In the south, they are found abundantly in the Wayanad-Mudumalai-Bandipur-Nagarhole range. A recent survey of the gaur population in the Nilgiris division of the Tamil Nadu forest department has put the population at 2000 in the division.

These large herbivores are being increasingly found outside protected areas. Many gaurs have made farmlands of the Nilgiris district and the Kodagu district in Karnataka their home. In Kodagu, where the forest is contiguous with coffee plantations, they remain true to their shy nature and take to their heels at the first sign of human presence, leaving trails of destruction in its wake. Says 55-year-old coffee planter N.B. Krishnaraj of Nagarally village in Somwarpet taluk, “Most of the times, gaurs come into the estate at night. We rarely get to see it during the day. Even if we spot one, they take to their heels and sprint away. They come in herds at night. They mostly brush their horns against coffee shrubs and cause damage. They also break the Dadap trees (Erythrina subumbrans which coffee growers grow as a shade tree) and eat their shoots.”

Barring a few isolated freak accidents, it is usually crop damages by gaurs that are reported from Kodagu. In the Nilgiris, however, severe forest fragmentation has increased conflict between the gaurs and humans. These conflicts, mostly accidental, have led to the loss of lives as well. Records with the forest department (Nilgiris forest division) show that in the year 2018-2019, five human lives have been lost and 30 injuries reported from encounters with gaurs. “They normally move about in the early mornings and evenings. We have sensitised the local population to not venture out at these times if possible so there are no accidents. Early mornings and late evenings are the time for these animals and other times are for human movement. We have to do that to coexist with them,” said district collector of the Nilgiris, J. Innocent Divya.

At a 1200-acre tea plantation in Coonoor, the labourers claim there are at least 50 gaurs (of multiple herds) that have been residing in the tea estate for close to two decades. The labourers who pick tea face the danger of getting too close to the gaur. But they’re not scared and apply caution when needed. “Erumai (gaurs) don’t do anything even if we go close to them. We do our work maintaining a fair distance and they don’t trouble us. So I am not scared to work here,” said 50-year-old tea picker Sivagami.

Recurrent crop damages caused by gaurs, however, infuriates some farmers, but elephants, leopards, and bears cause much more damage to crops and lives. District Forest Officer, Nilgiris Division, Guruswamy Dabbala says that human settlements are expanding in the district and so is the population of gaurs. “They are now so habituated to human presence that they even walk into towns and markets. They relish certain crops like beetroot which is proving to be a problem for farmers. Casualties have happened and it’s mostly the elderly, women, and labourers who find themselves in harm’s way,” he said.

Gaurs are adaptable, undergo behaviour change to coexist with people

Extremely shy in nature, it’s in fact difficult to get close to a gaur in its natural habitat. How they began to move out of the forests and into human-dominated spaces and underwent tremendous behavioural changes to coexist with humans is baffling to the scientific community.

What facilitates their cohabitation with humans is perhaps their highly adaptable nature. Shukla and Khare (1998), in their studies in Pench Wildlife Reserve, Central India reported that “gaur grazed and browsed on a much wider variety of plants than any other ungulate species of India”. It feeds on green grass, young leaves, and soft shoots during favourable forage conditions, at the same time, hardly discriminated between low and high-quality food during severe seasons. Another study titled Diet Composition and Quality in Indian bison based on Fecal Analysis said that gaur is an intermediate or adaptable mixed feeder with the ability to adapt to poorer diets when high-quality food is in short supply, such as in winter.

Diurnal in nature, they become nocturnal in conflict-prone areas, said M. Ashok Kumar, a wildlife biologist at Kerala Veterinary and Animal Sciences University who has done an extensive study on gaurs in Mudumalai National Park adjacent to the Nilgiris district in 2004. This shift from natural behaviour is now being observed in the Nilgiris as well as in Kodagu. In Kodagu, gaurs venture into human habitations only at dusk and stay away from humans in the day whereas, in Coonoor and Kotagiri where the tea plantation does not provide cover like coffee plantations, they have overcome their shy nature to survive and coexist with humans all times of the day. 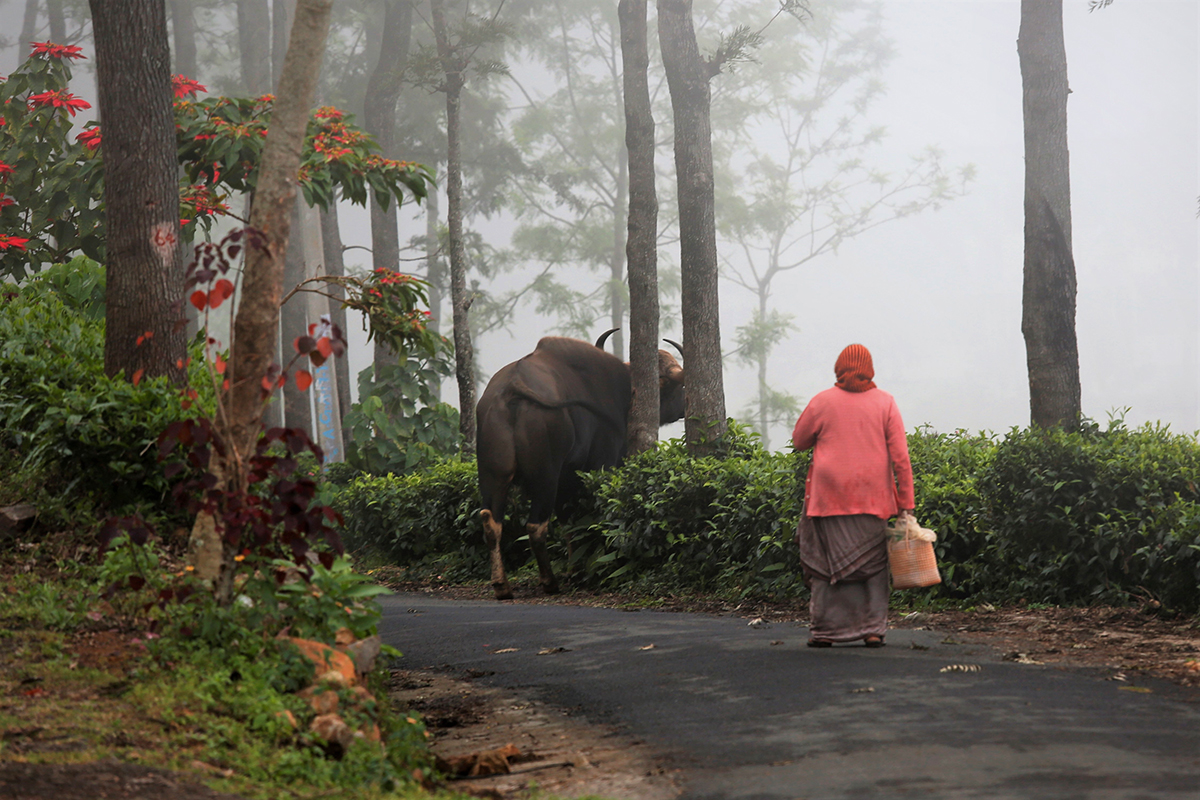 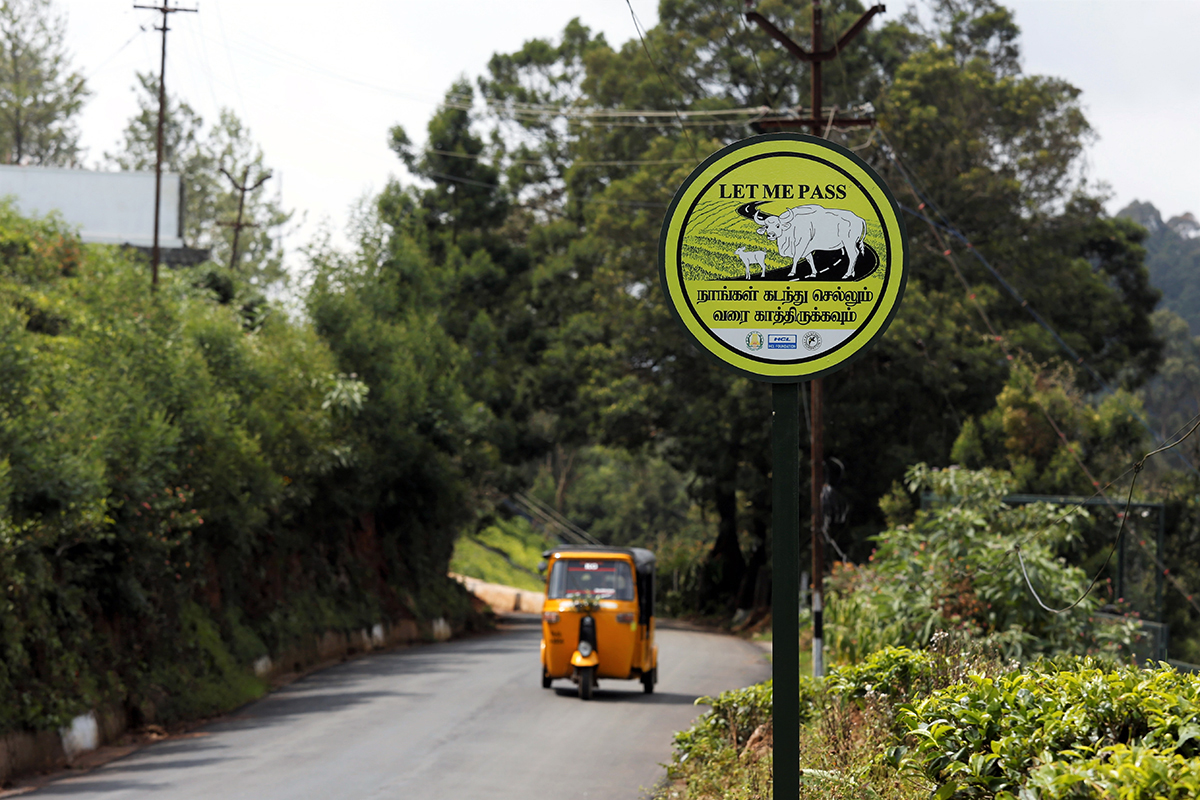 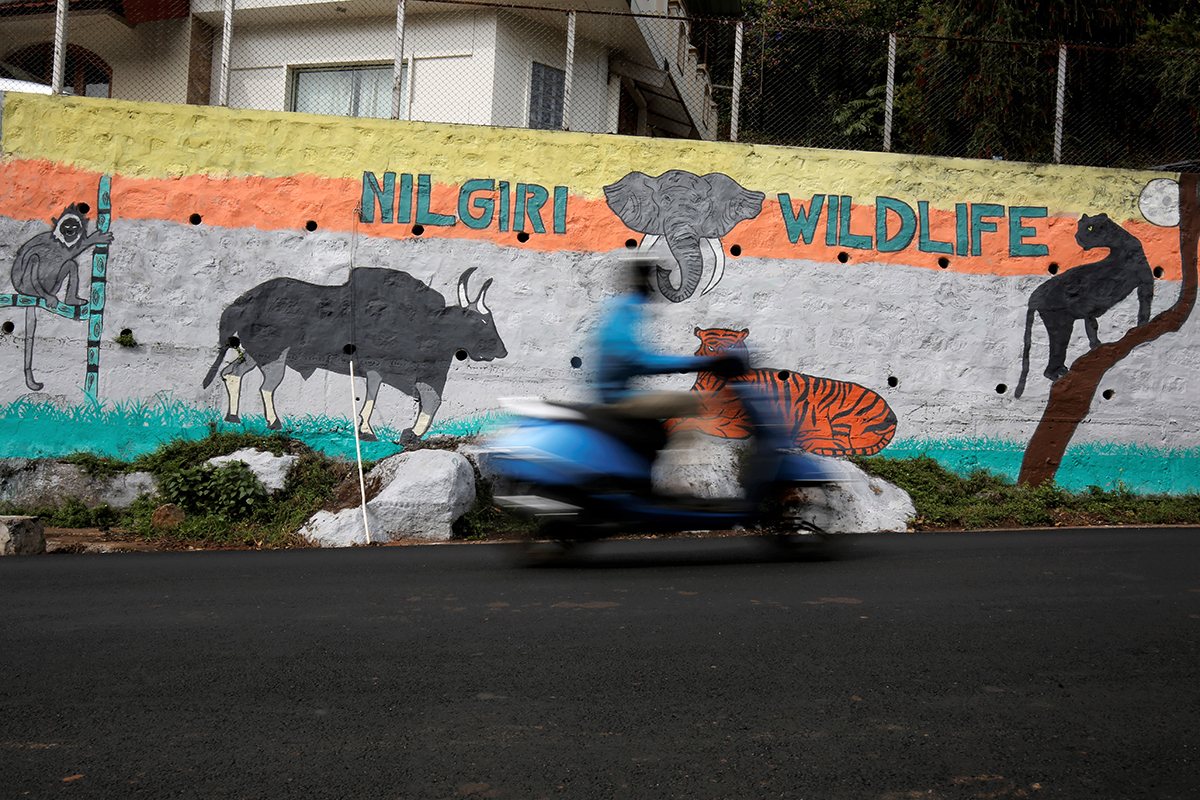 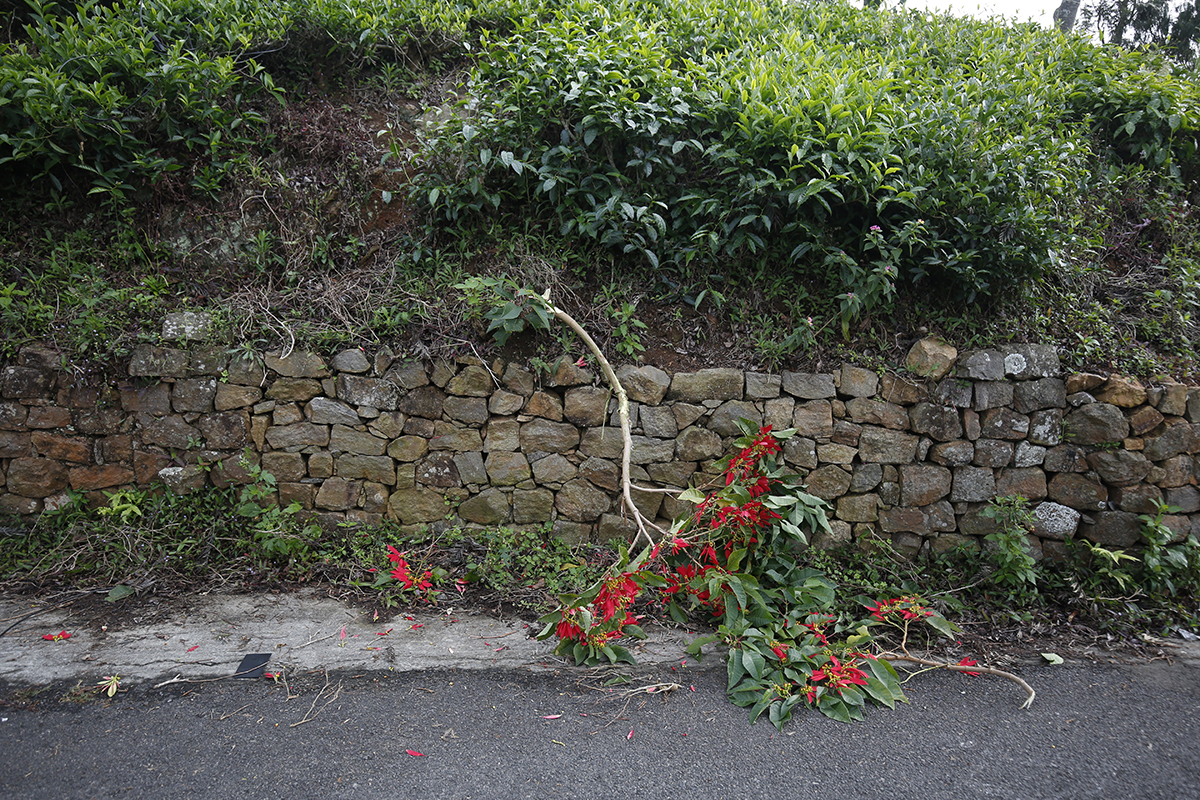 The gaur and the signs of its presence on the streets of Coonoor and Kotagiri in Nilgiris. Photos by Abhishek N. Chinnappa for Mongabay.

What pushed gaurs to leave the forest to navigate human-dominated space? Ecologist Raman Sukumar of Centre for Ecological Sciences, Indian Institute of Science, Bangalore, points at various possible reasons for this, one being a major rinderpest infection among the gaur population in India in 1968 that killed thousands of gaur and a surge in population thereafter. Rinderpest, also called cattle plague or steppe murrain, was a fatal viral disease of cattle, domestic buffalo, and many other species of even-toed ungulates, which was completely eradicated in India.

This is corroborated by M. Ashok Kumar who said, “The rinderpest infection had done severe damage to the gaur population in India. It’s documented in E.R.C Davidar’s book Cheetal Walk where he mentions that one could see gaur carcasses everywhere in Bandipur and Mudumalai.” The population, however, picked up soon after the virus was eradicated. “While there was only one individual per sq km soon after the infection, in 2004, we noticed an eight-fold increase — eight individuals per sq km,” he said.

Gaurs are large bovines that have a wide home range, with the individual male home range varying from 135 to 142 sq km, and overall individual female home range varying from 32 to 169 sq km, shows a study from Bandhavgarh Tiger Reserve on reintroduced gaurs. This shows that any forest area less than 50-100 sq km is not viable for the gaur population, said Kumar. The Nilgiris district with an area of 2545 sq km holds an impressive forest area of 1,719 sq km. But this forest area is highly fragmented. “The forests in the upper Nilgiris (Kotagiri and Coonor areas) are small, fragmented and the higher elevation shola forests are not suitable for gaur. Changes in land use pattern such as the conversion of natural fallow land, a grazing area for gaur, for buildings reduces the non-forest habitat available for them,” reasons Kumar.

The district is also known for agriculture with 2019-2020 estimates showing 734.6 sq km-land dedicated to various crops. And these agricultural lands are more attractive to gaurs due to their easy accessibility and the presence of grass there. “Gaurs are grazers. More than 80 percent of their food is grass. But due to a surge of invasive plants like Lantana camara in the forests, there is probably little grass for them to graze on,” said Sukumar.

Kumar said the isolated grasslands, which are grazing areas for gaur, have been invaded by foreign species like wattle, pine, and Scotch broom (Cytisus scoparius). Invasive plants like Lantana camara and Cytisus scoparius give little scope for grass to grow.

Another reason, largely speculative though, is climate change itself. Global warming is changing the behaviour of many species and gaur could be one of them, believe scientists. Kumar says the sudden proliferation of an invasive plant Senna spectabilis in these areas is a good indicator that climate change is altering landscapes and gaur could well be one of the species altering its behaviour.

Most importantly, gaur has no natural predators. “Tigers are the only predators but studies have shown less than 30 percent of a tiger’s diet comprises gaur. They mostly eat cheetal and sambar deer,” said Kumar. “The decline in poaching due to increased protection for wild species is another reason why gaur population is now strong,” said Sukumar.

Let them be or move them to better habitats

District collector Innocent Divya said despite the tolerance people have for these animals, farmers complain of crop loss and demand the forests to be fenced. “It’s not possible to restrain and restrict animals. This is their land as much as it’s ours. As far as gaurs are concerned, we just need to be mindful. If we let them be, they let us be,” she said. Raman Sukumar said a much softer approach (compared to other animals like leopards and elephants) can be taken for gaurs since it is possible to live with them. “Accidents are an aberration otherwise it’s possible to live with them. We need to educate people to stay away from them, respect their space,” he added.

Divya says the district will consider other measures like translocation if their population increases to a point it gets difficult to handle. Experts feel translocation to larger adjacent protected areas is the best solution for herbivores like gaurs since they adapt effortlessly in newer environments, unlike carnivores. “Range-use pattern and seasonal movements in adjacent areas will shed more light on how these animals are moving between patches. Identification of corridors can then be the next long-term solution,” said Kumar. Grassland restoration in gaur’s natural habitat is another viable solution that could help prevent interactions with humans. 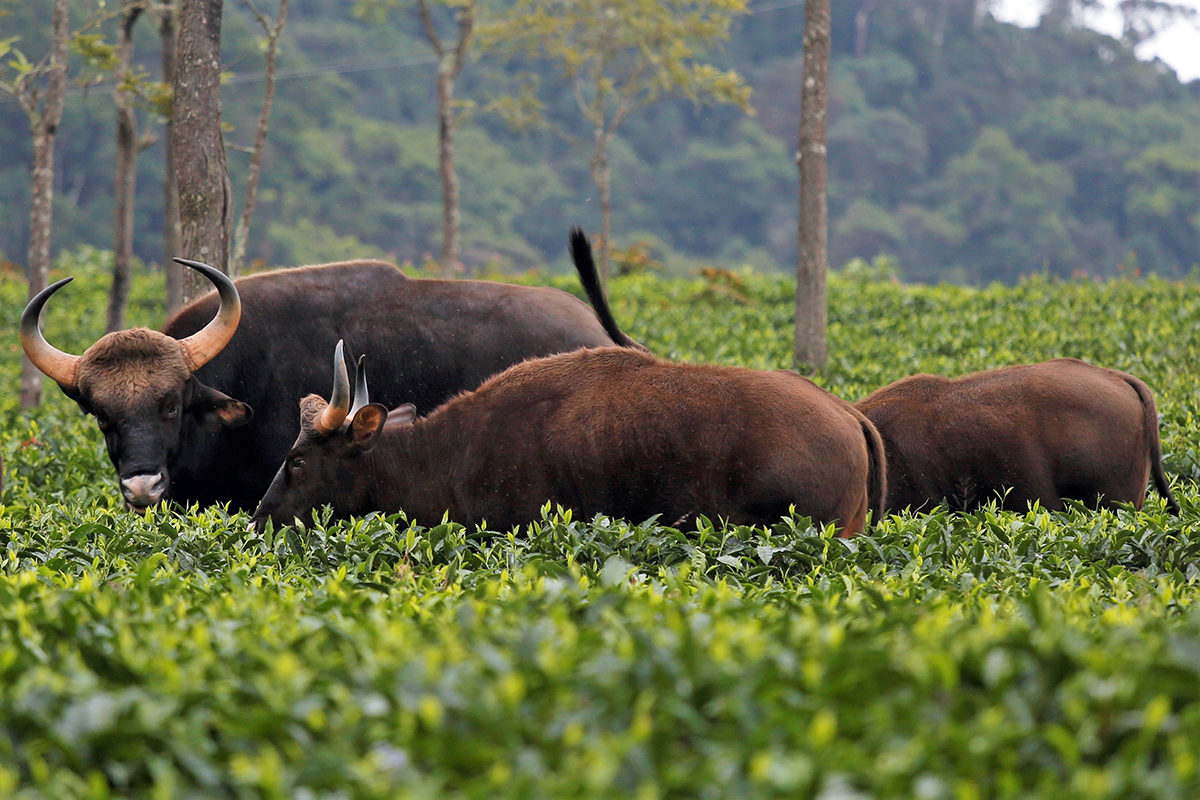 Gaurs in a tea estate in Coonoor, Tamil Nadu. Considered to be the world’s largest bovine, the gaur receives the same protection as the tiger under Indian laws. Photo by Abhishek N. Chinnappa for Mongabay.

Banner image: An adult and calf gaur in a tea plantation in Coonoor. Photo by Abhishek N. Chinnappa for Mongabay.