People power to clean up Pune river, bit by bit

by Himanshu Nitnaware on 2 December 2020

One of the five major rivers originating from Pune district, Mutha has lost its glory because of increasing water pollution and a lack of conservation efforts from the authorities. But some stretches of the river are seeing a revival through the efforts of a group of volunteers that are cleaning up the banks of the river and also improving the ecosystem of the water body.

Starting in 2017, three volunteers of the NGO Jeevitnadi, would get together each week to clean small stretches of the river. Over the years, it has evolved into a larger wetland conservation project and has volunteers from different walks of life.

Aditi Deodhar, founder-director of Jeevitnadi who leads the effort, stated that during their Sunday clean-up drives, they identified two streams flowing into the river stretch near Vitthal Mandir at Hinge Khurd that carried sewage water. “As the flow contained polluted and sewage water, the river started giving off a foul smell and the local residents had then turned it into a dumping ground. The natural streams too were seen clogged at places, changes in topography owing to human interventions and waste matter,” she added.

This became part of Jeevitnadi’s ‘Adopt a Stretch’ programme in which they took up a particular stretch of the river and involved like-minded residents and experts to give shape to it with the hope of being able to swim in the same river one day.

Aside from this stretch of Mutha river, Jeevitnadi is also working on stretches of Mula, Ramnadi and Pavana river in and around Pune city. Some of the work has been temporarily on hold due to the COVID-19 pandemic and associated lockdown.

The Mutha river originates at Vegare village upstream of Temghar dam in the Western Ghats. It flows to Temghar and then small tributaries like Ambi and Moshi join and reach Khadakwasla. It then flows from Shivane to Nanded city, Vitthalwadi to further down to Mhatre Bridge, S.M. Joshi bridge, Sambhaji Garden, and converges with Mula river at Sangam Ghat near COEP College and is then known as Mula-Mutha, where it flows along Bund Garden and joins Bhima river near Shirur.

Between Vegare and Sangam bridge, the Mutha river flows a distance of 50 km with about 15 km flowing through Pune city, which it formally enters at Warje bridge, as per municipal limits.

Untreated sewage is the biggest cause of pollution in the Mutha river. Sewage treatment plants don’t entirely treat the sewage and an estimated 30% of sewage enters the river untreated sewage water is the cause of high dissolved oxygen (DO) levels in the river. Other causes include industrial pollution owing to the cotton industry, solid waste dumped by residents or religious waste and wastewater from residential societies. 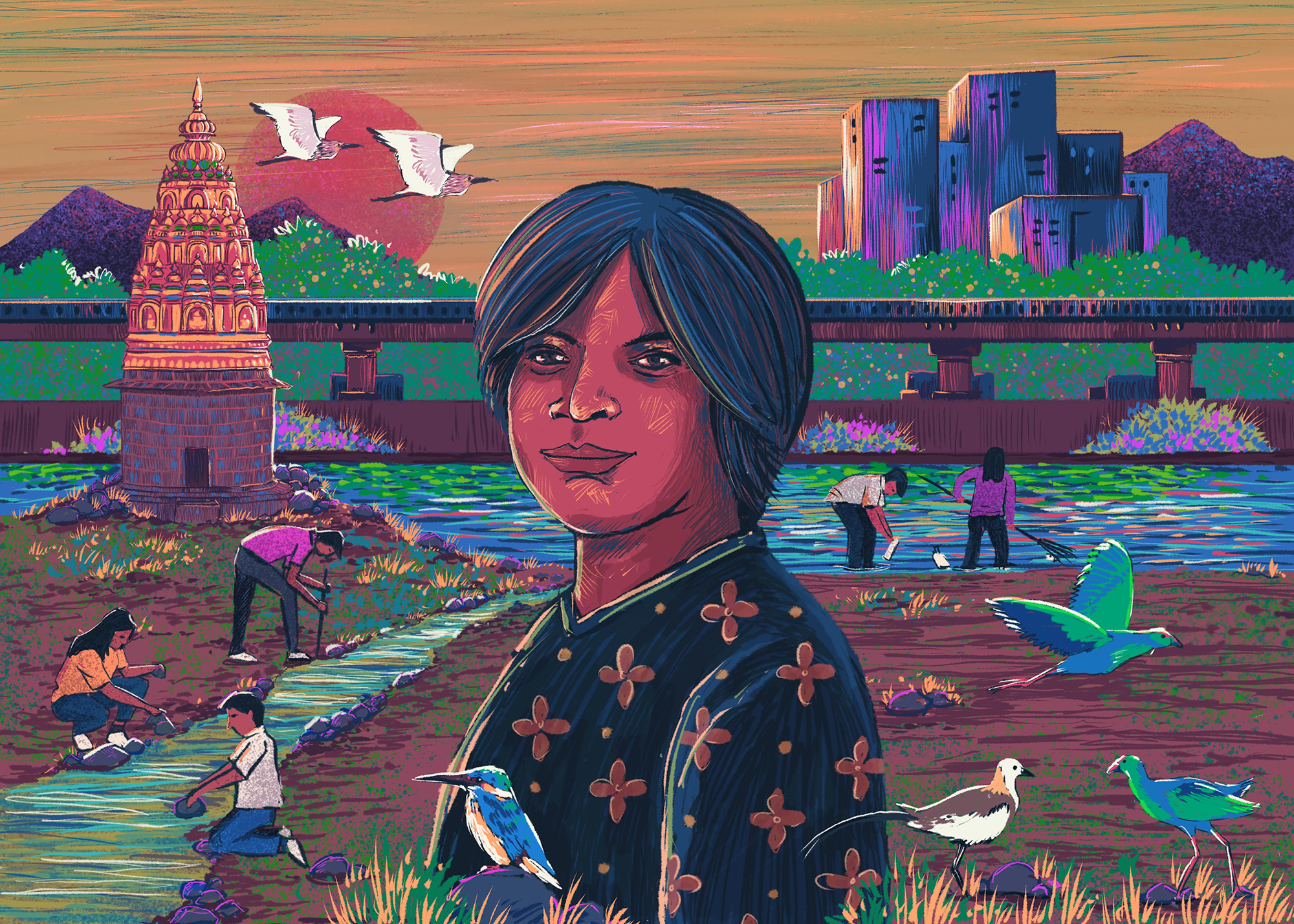 Aditi Deodhar, founder-director of Jeevitnadi, empowers and mobilises citizens to conserve urban rivers of Pune such as the Mutha river, which has been plagued by pollution and untreated sewage. Illustration by Rohan Dahotre.

Deodhar, who grew up in Pune, is a Mathematics graduate and worked in the IT industry for a while. While was aware that the rivers in Pune were polluted, she realised the extent of pollution after her PG Diploma in Sustainable Lifestyle Resource Management at Ecological Society of India, Pune, in 2012. During her leisure time, she read and researched to create an informal group of people who were passionate about the cause and wanted to do something to address the pollution in rivers.

In 2014, Deodhar along with a group of like-minded people came together with the goal of bridging the gap between humans and polluted rivers. Their dedication resulted in the formation of Jeevitnadi aimed at “river rejuvenation through community participation”. As part of the organisation, the team works towards creating awareness among people about the chemicals and toxins that enter the river owing to human activity and how it could be reduced. They organise river walks, music festivals and talks to bring people closer to the river.

The work on the small but perennial stream in the Mutha riverbed in Vitthalwadi is a pilot project of wetland development.

As the NGO tried to amp up the conservation efforts in this project, they roped in professionals from Oikos and Lemnion Green Solutions (LGS), organisations working in the environmental sector.

Ketaki Ghate, one of the founders and managing directors at Oikos, said the first task towards the effort was to separate the sewage water from a clean source of water coming from a natural spring. “That is achieved by placing stones in the area and creating a topography. The water flow, the mapping of small pools and other technical know-how was provided,” she said. Placing the stones help demarcate the area and channelise the water flow. The stones also prevent people from disturbing the system. The stones are also used to layer the flow of water helping to flow in one direction and prevent saturation of water or form small ponds.

Planning the water flow was conducted in a way so that it flows topographically and ensuring enough oxygen gets mixed with water, she added. LGS co-founders Prasanna Jogdeo and Pooja Tendulkar provided the changes required in topology and designed the in-stream interventions, which regulated the water flow. A few structural changes were required to ensure that water was retained in some areas, and it benefitted the aquatic ecology, increased the dissolved oxygen and also facilitated better nutrient uptake by plants, stated Jogdeo.

He added that the flow was channelised using natural material in the surrounding area like rocks, and soil. To treat the water at the source, wetland plants like typha, cattails, sedges, canna, asclepius (milkweed) and colocasia, and other aquatic plants like azolla and duckweed were planted, he mentioned.

This work on a small stretch of the river went on for three years. The volunteers would mostly work on weekends most of year, though the frequency would decrease during the monsoons.

As the project moved forward and started getting popular on social media many locals got involved in the cause. The volunteers would clean up waste on various river stretches flowing through the city, mostly the parts nearest to their homes. That way they did not have to travel long distances and multiple areas could be worked on simultaneously.

“My daughter Shalmali was 12 when we were passing through the bridge above the Mutha river. She complained about the people throwing waste in the river and insisted that she prevent them from polluting it,” said Sachin Nalawade, her father, who has a pest control business.

But soon, Shalmali realised only a few would listen to her when she prevented them from throwing waste into the river. “A social media search helped her know about the initiative and join the group of volunteers. Shalmali has been instrumental in roping her friends as volunteers,” he added. Because of his daughter, Nalawade too joined as a volunteer.

Ashwini Bhilare-Patil, who is a homemaker, said she was looking for some nature conservation cause on Facebook and got connected with some volunteers working on the Ramnadi river stretch, another river cleanup project by Jeevitnadi. Narrating her journey, she said the volunteers directed her to the Mutha river stretch as it was near her residence at Singhagad Road. She started cleaning the water by removing stones and rocks each Sunday, she stated.

As the volunteers would clean up the rubbish and other waste, water would flow and the saturated water and rubbish in the small stream got cleaned in the process.

“During the process, I have learnt what plants are required, what dissolved oxygen means, what are bioindicators and other aspects of conservation. Little do we know the damage we are causing to nature. We fail to realise that we are dependent on nature,” she stated.

Bhilare-Patil stated that they have documented birds like red avadavat, white-breasted waterhen, pale-billed flowerpecker and scaly-breasted munia, which are bioindicators for good water. Ashwini added that snake-like checkered keelback, frogs, crabs and other creatures have become regular and are thriving in the area.

The movement evolved to create lateral leadership in the group, with individuals leading clean up efforts in different stretches of the river.

A Pune resident, Adish Barve, who works as a design engineer, led the initiative to clean the second stream, which is adjacent to the first stream that flows into the Mutha near Vithal Mandir where the clean up drive was going on. “The flow of the water from the canal in the stream is like a waterfall with sewage and polluted water. In 2019, we decided to replicate the same success with the other stream,” he added.

Barve said the two wetland rejuvenating systems helped to preserve and create a haven for biodiversity around.

However, the ecosystem still needs some maintenance work to ensure its sustainability, stated Jeevatnadi’s Deodhar. “Sometimes the algae content increases, which leads to an increase in oxygen content, affecting the overall plant health. Some people still dump waste in the streams and that’s why it needs cleaning. The floods during the monsoon often wash away some plants and need attention, but the majority of the structure has sustained and will become self-sustainable,” she explained.

The three years of efforts have now started showing results. The streams are providing cleaner water to the river and the perception of locals has also changed.

Deodhar stated that many people have observed that the stench has gone and the place is no longer perceived as a dumping site.“There are regular visitors along the stretch. We organise weekly storytelling and music programmes at the place. The efforts have helped the citizens reconnect or establish the lost connection with the river,” she stated.

Shailaja Deshpande, another director-founder with Jeevitnadi, stated that their initiative is an example of how ecosystems can get revived with dedicated efforts. “The efforts of a small dedicated group of volunteers attracted and connected people towards conservation. These live streams are the support systems of any river. The technical and scientific approach has helped support the river system by treating the water entering the river at the source,” she added.

The author is a Pune-based freelance journalist and a member of 101Reporters.com, a pan-India network of grassroots reporters.

Illustration by Rohan Dahotre, an illustrator based out in Pune. He is a nature and wildlife enthusiast, a keen observer who loves exploring the wilderness. He loves illustrating animals, birds and all things wild, contributing towards wildlife conservation and awareness.