Story of a river bed, a geological marvel and community pride

For the people of Bori Budruk, the geological term ‘tephra’ is a local legend. The village, around 100 km from Pune city, is nestled along the banks of the Kukadi river. With a population of around 6,000, the village residents are all well versed with the technicalities of the geological term – tephra – the dust sized particles from a supervolcanic eruption that travels long distances in the atmosphere and settles over time into a sediment layer.

In this case, the sediment has made a journey of 3,000 km all the way from a Sumatran volcano Toba and settled in Maharashtra, indicates research. Well known among geologists world over, the Toba volcano was once dreaded, for having produced three massive eruptions that led to near mass extinction-like conditions with thick ash traveling all the way to Asia, Africa as well as Europe.

The geological phenomenon is located alongside the Kukadi river which is the main source for water for domestic purposes in the village. Along one of the banks, also lies a smashan ghat (cemetery). Researchers from all over the world visit the Kukadi river bank for samples of tephra – which has now become the identity of Bori Budruk.

Bori Budruk’s residents are currently struggling to protect this tephra. At the forefront of this battle, is the couple Pushpa and Amol Korde. Pushpa has been the sarpanch (village head) for ten years now.

“When we first came to know about the tephra, we felt responsible for conserving it. This is something rare, and it is part of our village and our identity. People from all over the world come here and collect samples. We felt an urgent need to protect, and conserve this eco-heritage,” Amol told Mongabay-India. Amol even went on to enroll for a postgraduate diploma in heritage conservation from Pune’s Deccan College. “I wanted to get a complete understanding of the terminology. This would also help me spread awareness among the other villagers,” he added.

Two families closest to the site have been assigned the responsibility of maintaining a register to keep track of all those who come and go with samples.

“We recently had scientists from Israel who were interested. We had school children coming in right before Covid-19 hit,” said Amol.

However, the biggest victory for the villagers was stopping a sand mining challenge in 2016. “This was a big win for us all. There was rampant sand mining in the area, and a lot of the tephra was being scooped out since 2012. We took the matter to the high court, which directed the collector to stop the work in 2016,” explained Pushpa. “Now, we feel more of a need to protect this site.”

With plans to develop a site museum, and a five-village cluster eco-tourism trail, the local community has big plans for the site. “Our biggest problem is government funding. We keep pushing for the same, but since it’s a village our voices often go unheard. We are worried that the tephra may not stand the test of time, as the river washes away the sediments every year. Compared to how it used to be earlier, the tephra is now concentrated in patches,” she said.

The villagers have also formed a 15-member heritage conservation committee that regularly holds meetings with state officials. Thanks to consistent efforts, the panel signed a memorandum of understanding with the Deccan College in Pune in June 2020, to jointly preserve the site. Architects in the village have also drawn up blueprints and designs as to what the site museum could look like, with the tephra encased in glass boxes. However, there is still worry about the future. 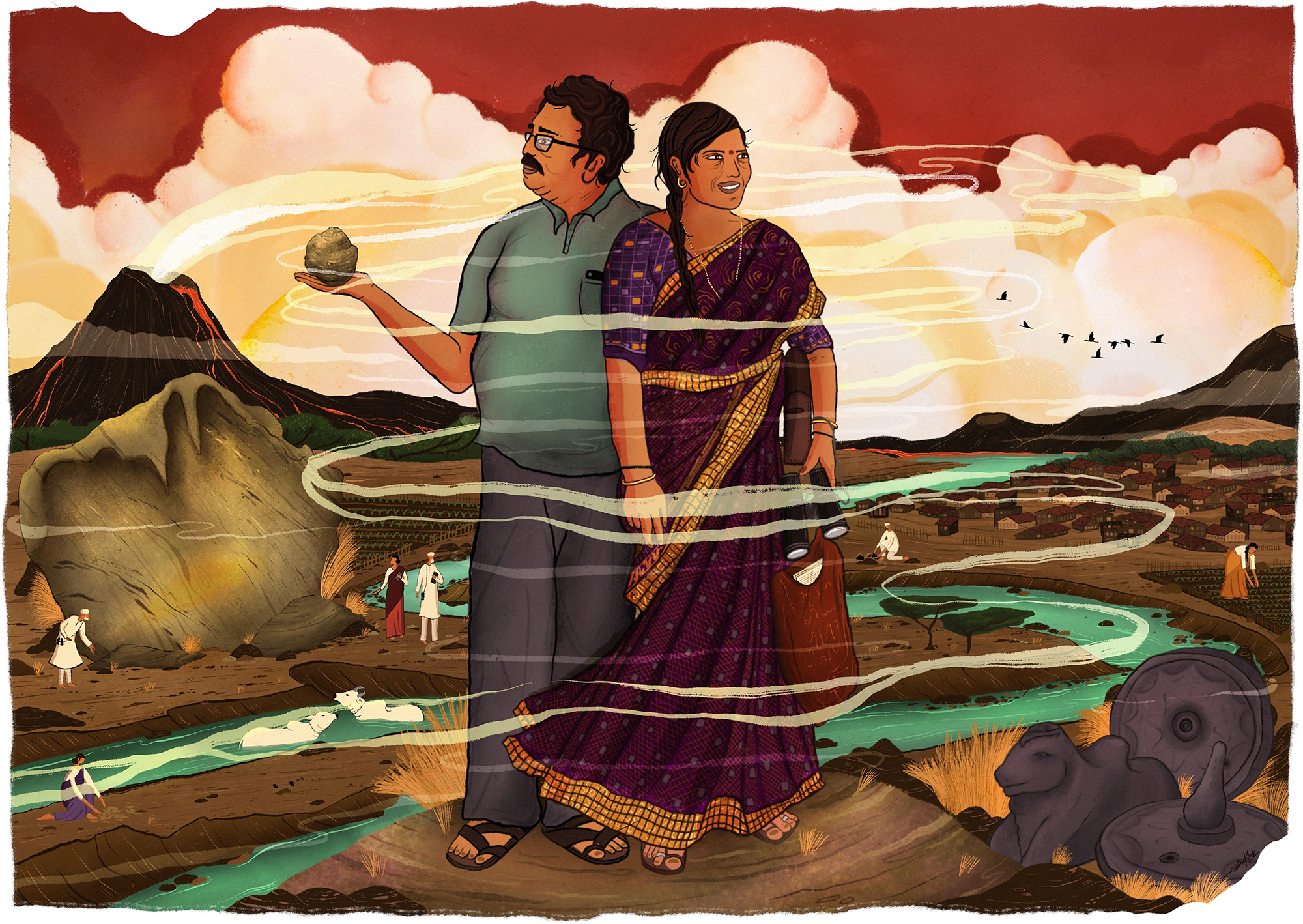 Pushpa and Amol Korde from Bori Budruk are leading efforts to preserve a unique geomorphological feature on the Kukadi river bed. Pushpa has been the sarpanch for ten years now while Amol has pursued a course on heritage conservation. Illustration by Svabhu Kohli for Mongabay.

The Toba supervolcanic eruptions spewed ash that settled into tephra and tuff. Unlike tephra, tuff is porous. Imagine a spongy-looking rock, formed from volcanic ash. This in turn has been classified into three types according to the three eruption timelines: Oldest Toba Tuff (OTT), Middle Toba Tuff (MTT) and the Youngest Toba Tuff (YTT). Of these, the YTT has been studied closely, with scientists tracing genetic bottlenecks, which meant a significant decrease in human population affecting the evolution of mankind.

The tephra at Bori, however, is the subject of a deeply contentious scientific debate.

Way back in December 1986, Sharad Rajguru, professor and now a retired head of the department of archaeology from Pune’s Deccan college, was part of one of the first research teams that stumbled upon the ash. “The site was first discovered by another researcher and professor Vishwas Kale. He is a geomorphologist and found lower Paleolithic stone tools at the site. Later, I arrived there with a group of about four research members. One of my students who was with us, accidentally struck some whitish material that coated the riverbanks. We brought it back with us to Deccan College and examined it under a microscope. The same night, it was confirmed that this is volcanic ash.”

Rajguru remembers how his team members celebrated over drinks that night. “This was a very surprising discovery for all of us. We were so happy to have found something of this magnitude!” he said.

It was towards the end of the 80s, when the villagers saw a young researcher Sheila Mishra who was Rajguru’s student rummaging along the riverbed to collect samples of the tephra. To aid her research, Mishra even rented a room at Bori Budruk. Seeing Mishra elicited the villagers’ curiosity. “They would often ask me what I’m doing. I’d try and explain as much as I could,” Mishra recounts.

However, little did the villagers know, Mishra’s work would transform their village into a geoarchaeologists’ hub. It was after she published her research paper in the scientific journal Current Science that the villagers came to know of the significance.

Dilip Pawar (58) still remembers the time Mishra frequented his hotel in the village for her meals. “I was her point of contact,” he laughs. “If there were any researchers who wanted to study the tephra, she would send them along to me. I would accompany them to the riverbanks, and show them around,” he recollects.

“When she first came here, we had no idea that this ‘sand’ that we see everyday was so important. Now, everyone in Bori Budruk is proud to be associated with this kind of heritage,” Pawar says.

Mishra’s arrival however served another purpose, more so in a geological sense. Her visits entailed a scientific deep dive into the actual dating of the tephra. “I was interested in the dating. You see, the site first came into focus when Dr. Kale first discovered these Aeshculian tools that date back to the lower Paleolithic era. It is very difficult to date these tools in India. However, volcanic ash can be dated. So that’s how I got interested.”

Describing her travels to Bori Budruk, Mishra says, “Since I had to spend a lot of time there, I decided to rent a room.”

Mishra worked tirelessly over the next couple of years. She covered the stretch of the riverbank to understand the site’s stratigraphy, a branch of geology concerned with the study of rock layers and layering.

Villagers at Bori Budruk continue undeterred in striving to protect their geological legacy. In 2018, fencing was done in a neighbouring village of Salwadi for about 700 metres to protect a part of the site. Apart from this, signboards were also erected, detailing the significance of the tephra. “We need funding desperately as all this money is mostly coming out of our own pockets,” Amol said.

Earlier, the tephra lined the Kukadi riverbanks across 12 villages, with Bori Budruk having the highest concentration. It is now coating some stretches of the bank, and is patchy.

In his 60s, Ranjan Jadhav from Bori Budruk, said they never thought the sandy substance they saw near the river would be so significant.

Reminiscing on the earlier days, he said, “People used to walk down to Bori Budruk from Narayangaon about 16 km away. There was no road, nor any vehicle. A handful had cycles. We would spot Mishra, but nobody gave her a second glance. At that time, we never really knew that it would be something so big. It’s 34 years since then and now ‘tephra’ is a word that’s part of our common tongue,” he chuckles.

Sudha Vaddadi a geological consultant who was formerly associated with the Geological Survey of India (GSI), says the villagers are doing an exemplary job of conservation. In June 2019, when the villagers had convened a meeting with stakeholders for suggestions on conserving the site, Vaddadi was one of the experts who was called in, along with Rajguru and Mishra.

“They are doing commendable work trying to protect this heritage site, and transform it into an eco-tourism spot. Unfortunately, in India not much is done in terms of heritage conservation and protection. Most of these sites are dilapidated and their significance is undervalued. For the villagers to come together and do so much is very inspiring,” she said.

Jadhav is now worried about the legacy of the tephra. “Here, the tephra is the stuff of local lore. All the little children know about this. Our generation didn’t know, and we didn’t do much to protect it. The current generation is doing the best they can. Let’s hope it will be enough.”

Illustration by Svabhu Kohli, an independent visual storyteller based in India. Deeply inspired by the natural world and its mechanics, in recent times, their practice focuses on the intersection of magical-realism; collective memory and storytelling as a tool to understand our relationship with the universe and its complex life forms.