A birder involves community and authorities to protect Haiderpur wetland

by Nivedita Khandekar on 6 January 2021

Scores of people have travelled past the Madhya Ganga barrage at Bijnour in western Uttar Pradesh over the last three decades, casually appreciating the birds and the Ganga river. But one such visitor in 2013, Ashish Loya, not just noticed the beauty but also set out to explore the upstream of the barrage where there lay a large wetland.

For almost two years, he regularly visited various parts of the wetland, with each visit rekindling Loya’s childhood passion for birding. Loya, who now lives in Bijnour, around 10 kilometres away from the wetland, visits it almost every day.

Part of the Hastinapur Wildlife Sanctuary, the Haiderpur wetland stretches across 3,000 acres – with a core area of 1,200 acres – of Muzaffarnagar and Bijnour districts. It is fed by the mighty Ganga river and the smaller Saloni river that originates near Shukrataal at the Himalayan foothills. The wetland helps in flood control, water storage and purification, and supports livelihoods.

The landscape around the meeting point of the two rivers always attracted the birds. But after the construction of the barrage, also called Bijnour barrage, in 1984, the wetland took shape despite the crowded Gangetic plains and is now the largest in the state. It is home to 234 bird species. Of them, more than 90 are migratory bird species that visit the wetland between December and February and it is a stopover site for migratory birds in Central Asian Flyway.

“With bird stock crossing 50,000 in December, January and February, it’s one of the finest, lesser-known wilderness secret and birders’ paradise. With fluctuations of water level due to opening of gates at the barrage, the landscape scene at Haiderpur varies with season,” said Sanjay Kumar, Divisional Commissioner, Saharanpur, till recently.

Despite such abundance, this site was neglected by the forest department for some time and illegal activity thrived. In some pockets of the wetlands, there were disruptive people, some who brewed illegal liquor as well as rampant poaching and hunting. Moreover, at many places, certain communities would squat with their livestock and encroach the wetland.

Originally from Akola in Maharashtra, Loya, an alumnus of BITS, Pilani, worked in New York for several years.  There he balanced his life between working in the finance sector at Wall Street and volunteering with Sri Sri Ravi Shankar’s Art of Living programme. He returned to India in 2008 “post a spiritual upheaval” and went to live at the Bengaluru ashram of the Art of Living Foundation as a full-time faculty. As part of his work with the foundation, Loya, 47, is in Bijnour since 2013. Here, Loya returned to his childhood interest of birdwatching – in the 1980s, Loya was a member of the Bombay Natural History Society (BNHS) and had taken part in the waterbird census. In his college days, he was also the president of the college Nature Club.

Loya started touring the entire wetland area on his motorcycle. And then explored some portions on foot. He visited almost daily and soon realised how important the area is. That’s where his passion for the wetland started.

The wetland’s shape is such that most of it cannot be seen fully from the barrage. By 2015, convinced that this is a hidden jewel, a paradise for the birds, both native and migratory, Loya started uploading bird photos on the ebird.org website, a repository of birds from all over. Currently, Loya is the highest contributor from the Haiderpur wetland and Ganga barrage area.

He showed photos and videos of the birds to the then Conservator of Forest V. K. Jain, who responded positively and in 2019 installed a forest chowky at the wetland. That put a check on the incidents of poaching and hunting of birds. There are eight villages sharing a border with the wetland: six in Muzaffarnagar district and two in Bijnour district. And a few more nearby too, have easy access to the wetland.

Loya also received a zealous response from Sanjay Kumar, who joined as Divisional Commissioner, Saharanpur in June 2019. Himself a birder and nature enthusiast, Kumar took the lead and along with the Forest Department and World Wide Fund for Nature-India (WWF-India) held the first ‘Haiderpur Bird Festival’ on February 2 and 3 last year.

Asad Rahmani, former head of the BNHS, was present at the event. The expert was all praise for Loya for his consistent efforts for the conservation of the wetland. Haiderpur is now recognised in Rahmani’s book as an Important Bird and Biodiversity Area (IBA). 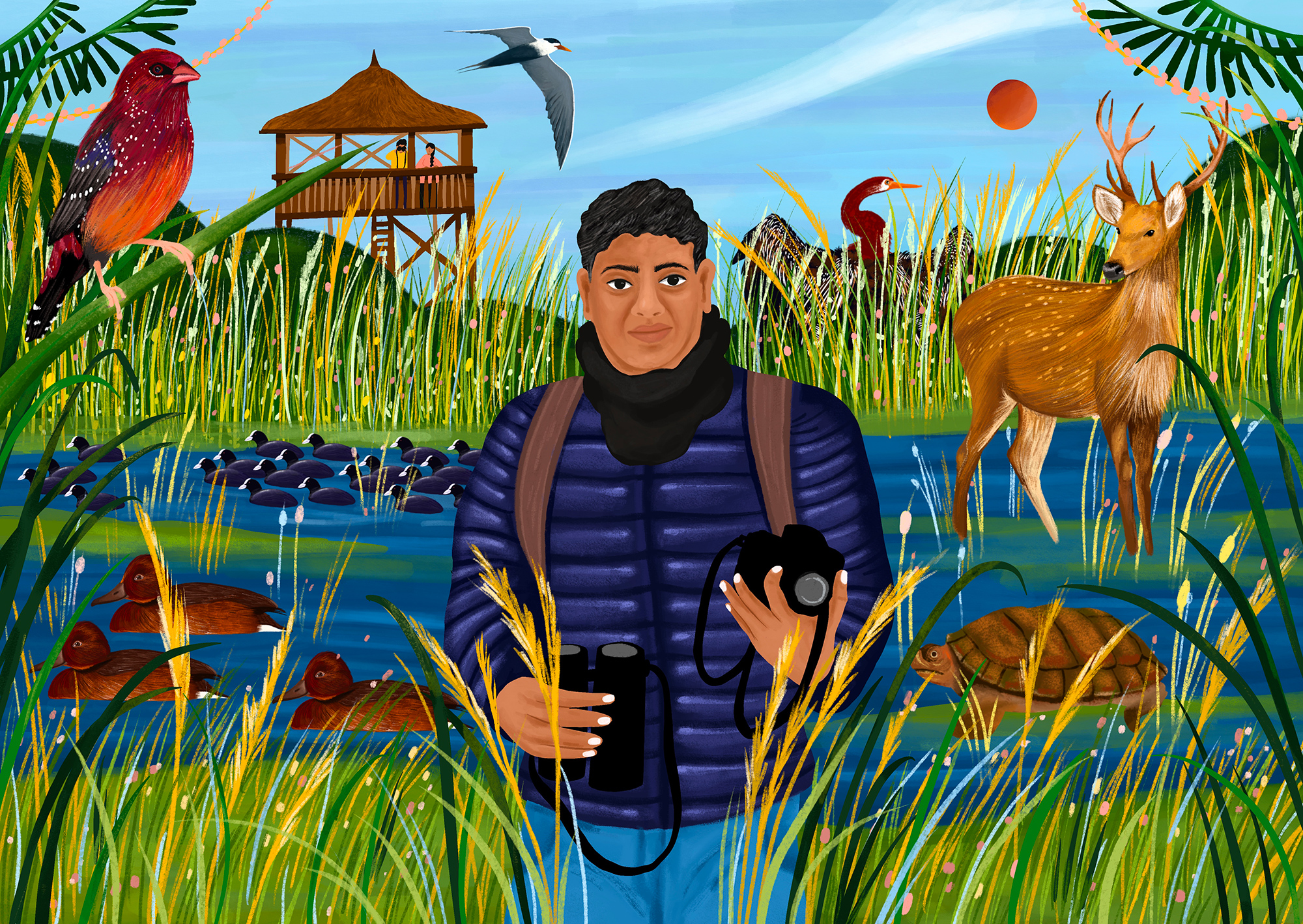 A former Wall Street professional and a passionate birder, Ashish Loya, brought the neglected Haiderpur wetland to the attention of the authorities and is now working with the local community to conserve the wetland. Illustration by Rashmi Tyagi for Mongabay.

During the Bird Festival, it was announced that efforts would be made to popularise the wetland through eco-tourism. Right now, tourism is a limited activity. Vehicles are not allowed deep inside but cycles on rent were introduced for visitors to roam inside the wetland on designated tracks. Boating is allowed but not in the core area. Birders and nature enthusiasts hope that the boating area would not be increased in the name of boosting tourism.

Fully aware that any conservation efforts would not yield better results if the local community is not involved, there are various programmes and trainings conducted for the community by the administration. Loya, on his own, is trying something entirely new – “using spirituality to bring awareness about conservation.” He first conducted Art of Living yoga and meditation classes for local youth and children from surrounding villages and through these, made efforts to raise awareness about biodiversity, conservation, environment and more.

“I then trained some of them in birdwatching. Four of them have now started volunteering as Ganga Mitra (friends of the Ganga) and have helped in spotting different species of birds and turtles,” Loya added.

Threats to the wetland

One would imagine the Haiderpur wetland remained in better condition because it was hidden from the masses. However, the wetland, while lesser-known, was used by the fishing community. Wildlife poaching was also a problem there. As the wetland comes more into the limelight, it may in fact get better protection and fishing may be regulated, but not banned, Rahmani said.

The eight villages around the wetland pose threats of various kinds, mainly from illegal fishing. Since the forest chowky and police chowky were established, poaching incidents have drastically come down. “We gave them a boat for patrolling. Now, joint patrol is happening including at night,” Kumar said.

Fortunately, there is no major industrial pollution. But Ipomea weed is a threat as it chokes the wetland and water hyacinth is definitely a problem as it comes from river Solani, which receives waste from villages on its bank.

“Unsustainable wetland resources extraction, especially fish by the surrounding villages may pose as a threat. This can be tackled by involving locals through alternative livelihood options such as the opportunity of becoming nature guides under the supervision of the local forest department. Also, locals can be encouraged in monitoring wetland health and thus can have a role in the wetland management,” said Asghar Nawab, Programme Head, Aquatic Ecology with the Wetlands International South Asia.

Loya argued: “The villagers will have to be given more incentives to not fish.”

The administration has made eight viewpoints at earth level, one double storied watchtower, then there is a 15-km long nature trail, lots of signages, including big tabular information about birds of Haiderpur with photos, toilet blocks, polythene free zone, benches and dustbins on the trail.

“This place should be developed as a bird sanctuary or a biodiversity park and not as a casual picnic spot. So far the administration and the Forest department are doing everything right. Hope they stay on this track,” Loya hoped.

On November 11 and 12, 2020, Loya, WWF India and the Forest department participated in the Salim Ali Bird Count, a citizen science initiative where birdwatchers around the country undertake a count of birds at important bird areas or any water body. Loya along with forest guards observed and estimated the bird numbers at Haiderpur wetlands over three days. They counted up to 27,000 birds at the wetlands.

The count revealed 15,000 coots, 2,800 gadwall, 900 common pochards, 500 common teals, 150 tufted ducks, 25 red-crested pochards, 9 great crested grebe, three common cranes, two bar headed geese and 200 black-tailed godwits. Among the birds counted were also 1,300 rudy shelducks, the first sighting of such a size, according to divisional commissioner Kumar and 2,100 ferruginous duck, which could be one of the largest flock in the country. The team also counted 200 graylag geese during the bird count. As of now, there are 2000 graylag geese which could be one of the largest flocks in the country, says Loya.

“These are early days for migrant birds. We can surely expect more bird landings and more diversity in the coming days and weeks … The number will easily exceed 50,000 plus,” Sanjay Kumar, who relinquished charge recently on November 10, said.

The administration has already started a ‘River Dolphin Safari’ next to the wetland on Dolphin Day, October 5 last year. This was planned with the financial help of the National Mission for Clean Ganga (NMCG) funds while the study was done by Wildlife Institute of India (WII), Dehradun. Six turtles have been introduced as scavengers. Administration plans to brand it as a wholesome experience: Birding on foot, bicycle riding, and boat safari downstream of the barrage.

A ‘Book of Birds of Haiderpur Wetlands’ is in process with the support of WWF India. The checklist currently stands at 301 with 100 plus migratory species.

Considering all such positives, the Uttar Pradesh government has already sent a proposal to the Ministry of Environment, Forests and Climate Change (MoEF&CC) for the inclusion of the Haiderpur wetland as a Ramsar Site. Of the 10 criterions necessary to qualify as Ramsar Site, the Haiderpur wetland meets 5 to 6 of them. WWF-India and the forest department have developed a formal proposal for the same.

Rahmani has a word or two of caution for the powers that be. Terming as major threat the overdevelopment of Haiderpur for tourism, he has warned: “Under no circumstances, boating should be allowed for tourists or even government babus. Let the guards go in simple boats.”

Also, regulation of water level is important too “but first, it should be studied scientifically. Irrigation department should not be stopped for releasing the water for farmers. Actually, birds prefer shallow water,” he added.

As long as there are no boating and people watch birds from bunds and watchtowers, Rahmani said, it is not a big problem. Garbage and plastic litter will become a problem (in the future due to increased tourism) but can be controlled.

Illustration by Rashmi Tyagi, a visual artist and illustrator based out of India. Her work borrows inspiration from nature, stories of courage and curiosity of the ordinary. She enjoys working on narratives that support the environment and telling stories in bold, colourful ways that elicit hope and inspire change.