When young Arturo D’Souza and his friends would take their cows and buffaloes to the Bondvol lake to bathe, the melodic sounds of a multitude of birds filled the air. Bondvol, a 110-year-old natural reservoir in Goa, built during the Portuguese times, was the source of water for the village of Santa Cruz. It was also rich in biodiversity. “We used to end up jumping into the water ourselves along with our cattle. The Bondvol waters were used for providing water to the fields,” says D’Souza, now 54 years old, with the memory of those times still fresh as ever.

As the bird song started to fade away, it dawned on D’Souza that the lake that lay in his backyard needed saving. It was 2016 when D’Souza went to the lake that sits atop a hill and noticed that it was completely dry. It was evident that it was human intervention that led to the drying of the lake and some builder wanted to build a ‘lake view’ project there. The childhood sounds of the birds resounding in his ears, he took the decision to do something about it. “If I cannot do something for this region, then what was the point of my having had those experiences in my childhood,” he said.

A citizen movement, “Save Bondvol Lake”, with D’Souza as a key member, started that year to save the heritage lake. Then, in 2017, the community went to courts and D’Souza too filed a public interest petition to seek protection for the lake. The citizen efforts over the years are now close to fruition as Bondvol lake is set to get “wetland” status.

D’Souza, a former English and History teacher, had turned full-time social activist in 2015 – around the same time that large builders were taking over land in Goa for infrastructure projects. When two salt pans near Santa Cruz, were nearly filled up in preparation for building construction, he took the lead and got the construction put on hold. When he started off, D’Souza admits, he felt clueless and alone in his efforts. But it was Father Bismarque Dias, a Goan Catholic activist priest in Goa who connected him with an advocate and many other social activists who helped bring the construction activities to the desired close. Fr. Bismarque was his initial propeller into the “social work scene”, as he casually refers to it, and since then, D’Souza hasn’t looked back.

In saving the Bondvol lake, help in mobilising other members of the community once again came from his church parish. Over three thousand people were involved in the citizen movement, with a lot of them already opposed to the fact that Santa Cruz had been made part of the Planning and Development Authority (PDA), a move that would have sped up urbanisation in the Goan villages. Clubbing the Bondvol lake issue with this helped unite people against a common cause.

A large meeting at the public ground, Azad Maidan, in April 2018, was attended by over 4000 people coming in from a number of places that had been included in the PDA and were against it. The group didn’t leave any stone unturned in their protests – bike rallies, peaceful marches, meetings, a deep environmental understanding of the area and more.

Ecologist and Goan scholar Nandkumar Kamat, an ally in the movement, believed that this fight was not going to be easy and extended immense support in the form of connections from the academic space who could help strengthen the case exploring the hydrological and biodiversity-related aspects. Professor A.G. Chachadi, one such academician from the Department of Earth Sciences of the Goa University joined the task force too. “We had tremendous support from everywhere,” says a humble D’Souza who insists that the entire team did it together.

Read more: A Goan village is on the brink of victory to conserve a century-old lake

One of the aspects that helped Santa Cruz village make a strong case and eventually attain victory is the comunidade system – the Portuguese handed-down, comunidade system of land-holding is unique to Goa. Such land is collectively held and cared for by the community which consists of the ‘sons of the soil’, Goans. Officially, the Calapor comunidade owned the Bondvol lake land. In 2017, the Calapor comunidade had moved the Bombay High Court’s Goa bench to seek protection for Bondvol Lake. Arturo D’Souza also filed a public interest petition in the High Court in 2017. As a united group, they were able to win back what was rightfully theirs.

Now, Bondvol is soon to be notified as a wetland, which will help gain additional environmental protection for their community asset. Pradip Sarmokadam, Member Secretary, Goa State Wetland Authority (GSWA) and strong supporter of the efforts of the citizens, shares, “The process of identification of wetlands across the state has begun. We will be looking at 35 wetlands this year, Bondvol is part of the first 10 we have evaluated. My team at the GSWA is working very closely with the scientists of the National Institute of Oceanography (NIO), who are looking into all the technical aspects of the guidelines for wetland identification.”

After the success of saving Bondvol lake, D’Souza continues to challenge the system by highlighting public interest issues. Armed with his mobile phone, D’Souza takes pictures and videos of the problems ailing Goa’s environment and shares them among his network to raise awareness and urge citizens to hold the state leaders accountable. 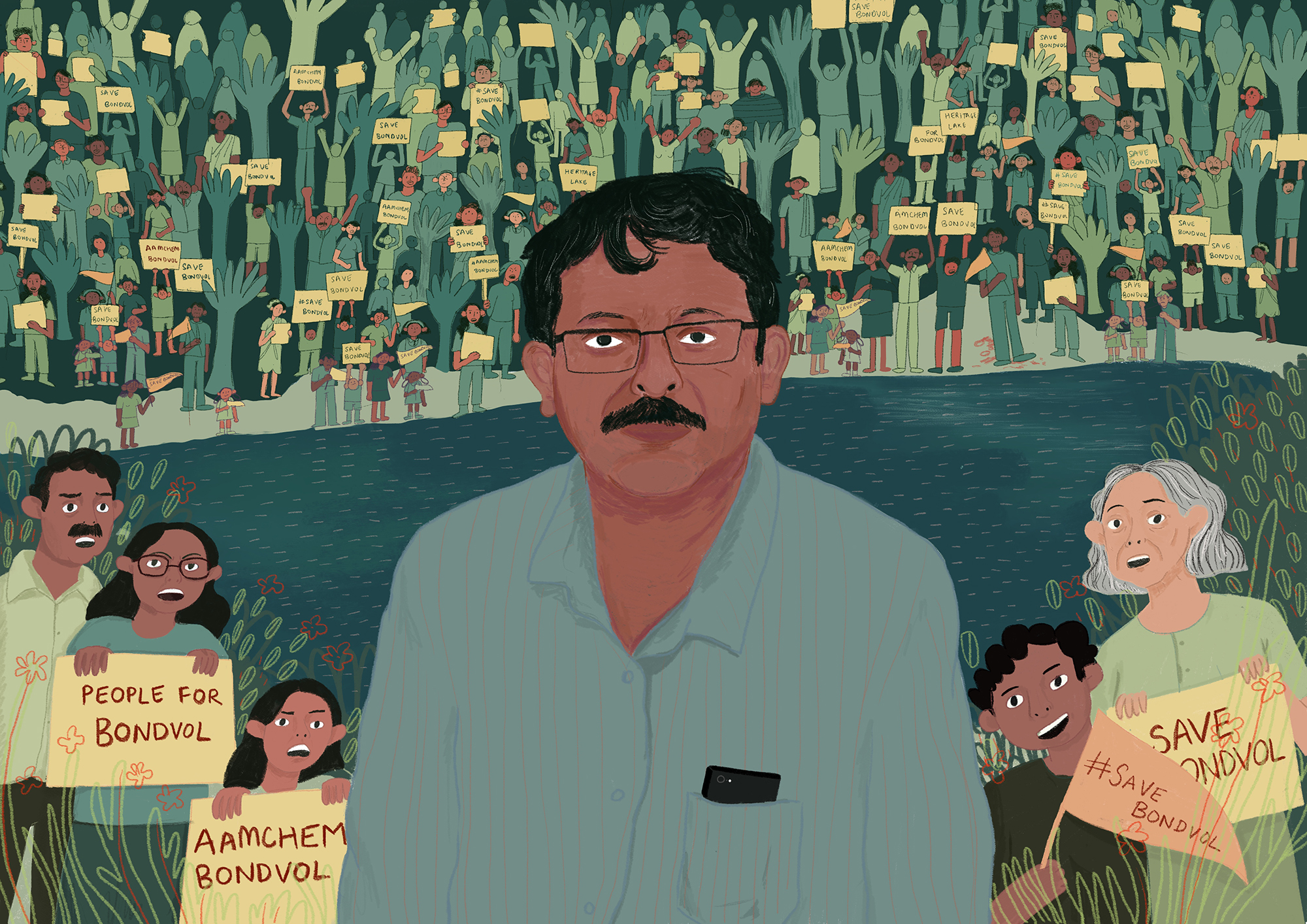 Shocked at the sight of a dried Bondvol lake, Arturo D’Souza, a former English and History teacher, decided to act and save the heritage lake. He has been a key member of the ‘Save Bondvol Lake’ people’s movement. Through social activism and legal processes, the lake is now protected and will be soon notified as a wetland. Illustration by Deepti for Mongabay.

A case-study for other wetlands

Citizens in various other parts of Goa, inspired by D’Souza’s journey, reached out to get his guidance with respect to issues in their villages too. “There had been other passionate people before me who had stepped into the ring and tried to make a change but till this day I don’t understand what made them back down,” said D’Souza, wondering aloud.

Along with the Bondvol lake in Santa Cruz, was the issue of the Chimbel lake in the village of Chimbel, another water body that figured in the Portuguese documents as well. In the earlier days, it was used for supplying fresh water to the city of Panjim. Now, like many other wetlands across the state, it faces extinction by encroachment. There have been protests in recent years against a proposed IT park project near the lake.

D’Souza’s support helped the citizens get this lake evaluated as well. “Currently the National Institute of Oceanography (NIO) has been allotted Chimbel lake and a number of other wetlands to fully understand if they fit the guidelines laid down by the MoEFCC – they look at the PH levels, varieties of phytoplankton, microflora, hydrogeological and other technical aspects”, Pradip Sarmokadam, Goa State Biodiversity Board, elaborates.

After having won the battle at Bondvol, avid kitchen gardener, D’Souza is spending his time growing vegetables when he’s not actively attending rallies and meetings for other causes.

“There is a marina planned to come up in Nauxi which is part of the fishing village belt that starts at Cortalim and continues until Bambolim. If this marina is allowed to be built, it will badly affect the lives of the Rapunkars (fishermen) whose livelihood depends on fishing. Around 296 species of fish breed here and have been traced by the NIO.” A go-ahead on a project like this will be a huge blow to marine life here.

When D’Souza first started off as a social activist in 2015, among the land being usurped for infrastructure, were also Khazan lands, a key estuarine feature in the state. The Goan word Khazan is similar to the Konkani word ‘Kharshan’ which means salty, explains Nandkumar Kamat, who also played a substantial role in D’Souza’s journey.

Tallulah D’Silva, a well-known architect adds, while reminiscing her childhood, “The Khazans are lands reclaimed from the marshes by building little ‘bunds’ out of mud, creating agriculture, aquaculture and salt panning systems that helped sustain rice farmers as well as fisherfolk. Built around 3500 years ago, these are one of the best examples of climate resilient ecosystems. I spent a lot of time walking around these and the mangroves when I was young.”

Over the past decade, and more specifically in the last five years, these unique features of Goa, the land of sunshine, with its beaches and biodiversity, are disappearing with urbanisation.

There are people’s movements emerging against various issues all around. The ‘Save Mollem’ movement is a united stand by citizens across Goa and beyond, to protect the Mollem National Park and the Bhagwan Mahavir Wildlife sanctuary from severe deforestation and fragmentation on account of four laning of a highway and double tracking of a railway line. Anticipating the damage to marine life by an upcoming marina, concerned people from the coastal villages around Bambolim village, have coalesced to oppose these plans.

With reference to Goa’s youth standing up for their forests and resources, D’Souza is excited about the possibilities youth involvement present. He says, “I had tried to provoke the youth a few years ago but it didn’t work then so I’m really thrilled to see youth involved now. The positive side of the pandemic is that these Covid times have brought the youth forward since their schools and colleges are not taking up all their time now.”

Illustration by Deepti, an animator and illustrator, based in Goa. Her work ranges from conservation communication, art around mental health to monster music videos and illustrations that capture the randomness of human experience.