by Deepanwita Gita Niyogi on 13 January 2021

From being a humble farmer to a confident leader, Ganga Rajput has come a long way. The 30-year-old is a resident of Chaudhary Khera, a village which lies in Madhya Pradesh’s portion of the dry Bundelkhand region infamous for its dusty environs and water scarcity. She has, to her credit, the revival of the talaab village pond that she and other women in the village, brought back to life after years of neglect.

Baba Talaab, a 12-acre pond, was originally built by the Chandela kings during their heyday. Though in its glorious days Baba Talaab yielded water for the village, the pond fell into disuse due to neglect almost four decades ago.

People in fact stayed away from reviving the Baba Talaab because of a prevailing superstition – the story in the village goes that when a sarpanch (village head) tried to revive Baba Talaab, he lost both his children. The tale kept people from protecting the pond. Over the years, as it went dry, the village hand pumps went dry as well.

With no water left in it anymore, the residents began to use the dry land for the cultivation of crops.

The village faced a water crisis as there was no facility to store water. There was not a single talaab (pond) in the village. The hand pumps too were unreliable. Water shortage became a regular feature, especially in the summers. Women, who fetched water had to walk long distances to access it and this would lead to altercations at homes over delayed chores.

Being most affected by the water problems, the women of the village, convinced by Ganga, took on the task of reviving Baba Talaab. In 2019, the revival was planned with the help of Parmarth Samaj Sevi Sansthan, a social organisation led by Bundelkhand’s waterman Sanjay Singh. A women’s network, called Jal Saheli (women friend of water), was set up with about 30 members, to revive the water body and water harvesting techniques in the drought-prone region, through community participation.

There was initial resistance to reviving the pond. Some feared the superstition, which was then overcome with rituals that the villagers believed would appease the local deity, Gaur Baba, who is supposed to hold sway over the water body. Then there were objections by people who had been growing crops on the dry area where the pond once was. The revival process was then done in a way to not affect them either.

As part of this process, the area was cleaned up, silt was removed and a check dam was constructed. When it rained, water would collect in the pond and over the monsoon months helping in groundwater recharge as well.

After the water has been in the talaab for around three to four months, the water would be pumped out and channelised into the Bachheri river, explained Parmarth field staff Dhani Ram. Once the talaab is drained of water, the wet soil dries up in around a week and it is ready for cultivation, he said.

This helped those who had been cultivating on the land as they decided to do wheat farming during rabi. The farmers had earlier been using the dried-up pond for cultivating soyabean and urad during kharif. After the revival, they shifted to wheat farming during rabi. Some 150 families cultivate on plots ranging from one to five acres. Once the water is drained out of the talaab to the river, the farmers prepare the land for wheat farming, said farmer Neelesh Lodhi, a resident of the village who used to grow jowar and gram during kharif and is now cultivating wheat at the talaab site along with four other farmers. A total area of around 20 acres is now under wheat cultivation. “Once others also agree to it, we can also do fish rearing in the pond (during monsoon when water collects),” he said.

“The work started last summer (2019) went on till this year (2020). There were 25 women with me who helped in the restoration process. The men also helped us and we constructed a check dam at the site to help control the water velocity. We have managed to retain water in the talaab which earlier used to flow out into the Bachheri river. We use the pond water for washing clothes and in irrigating our lands,” Ganga told Mongabay-India.

“This year (2020) in summer, there was no shortage of water,” Ganga gushed over the phone, talking to Mongabay-India, adding, “The men were afraid to do anything because of the prevailing superstition but women showed a lot of courage.” 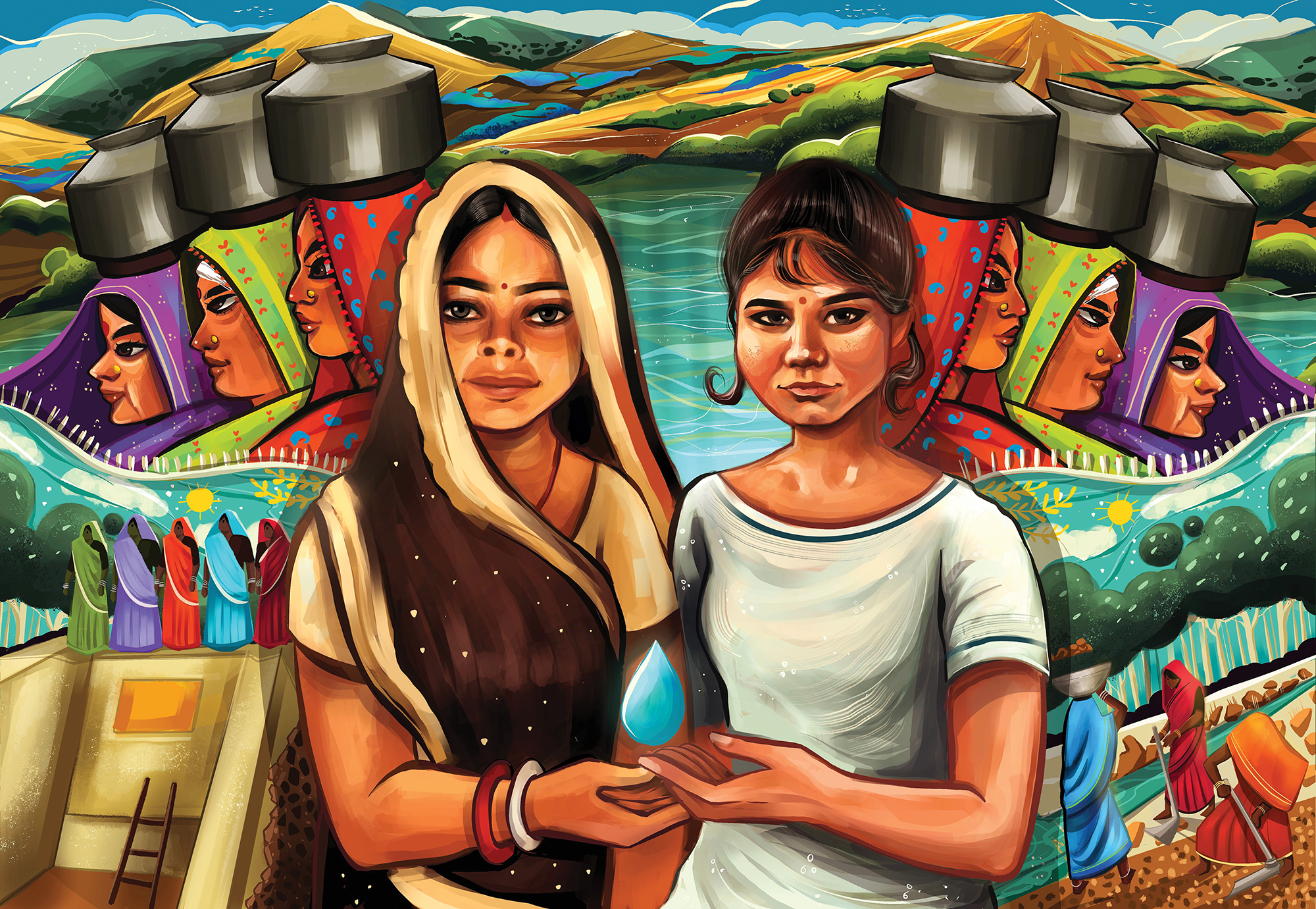 In the Chhatarpur district of drought-prone Bundelkhand, Ganga Rajput (L) and Babita Rajput (L) led the women of their villages to successfully revive dry ponds. A network of Jal Sahelis (women friends of water) is facilitating women to lead their villages towards water security. Illustration by Anwesha for Mongabay.

Not too far away, in Agrotha village, another water warrior, Babita Rajput, daughter of a marginal farmer, is also taking forward the efforts of reviving water bodies. The 19-year-old jal saheli Babita has led labourers as well as community women in diverting rainwater through channels in the hill to the pond.

Due to the lack of a catchment area in the village, the monsoon water used to run off into the hilly forested terrain instead of being collected in the village talaab (pond) spread over 70 acres.

The women dug a channel of about 12 feet in width, running for over 350 feet (107 metres), connecting a small hill in the forest to the talaab. “Babita and the village jal sahelis worked hard to ensure that water gets collected in the water body. Besides diverting the water flow, the women are also fighting to protect the forest to ensure good monsoon rainfall. Towards this end, they have also undertaken plantation work on a large-scale,” said Manvendra Singh of Parmarth.

Babita explained that around two years ago, the Parmarth staff urged the villagers to do something concrete about water security. “But at that time many people did not believe in them. After that through the help of discussions and meetings, we became part of Parmarth and started working,” said Babita, currently pursuing her Bachelor of Arts (BA) degree. “Initially when Parmarth wanted to work with women, men objected to the idea. But some determined women said that the organisation will help to make us water secure,” she told Mongabay-India.

In 2019, many women joined the efforts for restoration of the talaab.

Babita’s friend Kamla Lodhi said the talaab did not have adequate water. To remedy the situation, a nullah (channel) was created from the hill so that water can collect in the pond. “We revived the talaab this year (2020) and started work before the lockdown. There were about 200 women who laboured hard and stopped water from escaping to the Bachheri river,” Lodhi added.

Along with the pond revival work, some 250 saplings have been planted in the forest area about two km away from the village. The work on the Agrotha pond has also been appreciated by the forest department, said Parmarth field staff Dhani Ram.

Parmarth started the concept of pani panchayats in 2012, trained women and created a network of jal sahelis in Bundelkhand. At present, there are jal sahelis in 27 villages of Chhattarpur district.

The organisation leader Sanjay Singh narrates an incident where during a meeting a woman informed him that she had to face her husband’s rage after she failed to finish cooking on time. “I came up with the idea of jal sahelis in 2010. The women faced a lot of issues and now have been empowered. They sit in gram panchayat meetings and this has brought about a gender revolution,” Sanjay Singh said.

“As women face water crisis, even children are forced to drop out of schools. Caste is also a problem. Through pani panchayats smart women were identified, trained and informed about government schemes. Initially, we worked in 100 villages and both Chaudhary Khera and Agrotha replicated the work we did elsewhere. We stepped in these two villages in January 2019,” said Manvendra Singh.

He admits that it was difficult to talk to the women directly and men had to be convinced first. But as women started working, it also led to the setting up of kitchen gardens. “Men felt that it was insulting for women to step out. Some women used to be labelled as characterless for participating in training and men objected to their being selected leaders,” he added.

From gender discrimination where women could not sit together with men during meetings, things have come a long way. He said that though the government does many things, proper surveillance is needed. “Bundelkhand is famous for its talaabs. When community ownership ended and the government took over, many canals came up and roads were built. Earlier, rivers used to flow throughout the year and Parmarth is also working towards river revival,” Manvendra Singh explained.

Illustration by Anwesha, an illustrator from Siliguri, West Bengal. Her work is inspired by Indian traditional art styles. Her art focuses on women’s empowerment in a bold and colorful way.