During his childhood, Malhar Indulkar was fascinated by rivers and he felt a strong connection with riverine ecosystems. He had seen people, including his parents, voice their concerns about the pollution of rivers in the Konkan area of Maharashtra, where Indulkar grew up. After briefly working with otters in Karnataka, since 2018 the 27-year-old conservationist has devoted his efforts to conserve otters in the Tillari region of Maharashtra, part of the northern Western Ghats.

Tillari is the name of both a river and the valley through which the Tillari river flows, says Indulkar, who is part of Sanctuary Nature Foundation’s Mud on Boots Project. Tillari connects the Radhanagri and Amboli wildlife corridor in the north to the Radhanagri sanctuary and Bhimgad and Mhadei wildlife sanctuary in the south, which are in Karnataka and Goa respectively, Indulkar explains. “So Tillari valley is on the junction of three states: Maharashtra, Goa and Karnataka.”

Tillari valley has good patches of reserve forest interspersed with rubber, pineapple and cashew nut plantations. One special thing about this landscape, emphasises Indulkar, is that in the Western Ghats, Tillari valley or Terekhol, a river north of Tillari, are the northernmost extent of many wildlife species such as king cobras and Asian small-clawed otters. Of the three species of otters found in India, the small-clawed otter, which is the smallest among all otter species in the world and receives the highest level of protection under India’s Wildlife Protection Act, 1972, is mainly found in the Western Ghats. But it is difficult to sight it as it is mostly nocturnal (active only at night). “In three years, I have sighted small-clawed otters just twice,” says Indulkar.

The landscape of Tillari is heavily-modified, says Indulkar. Over the years, four dams have come up in the region and “so the stretches of habitats of small-clawed otters have become fragmented.”

Other species too have been spotted in Tillari. “You get slender loris here but up north you don’t really find them.” Elephants too frequent the area. In 2018, Indulkar and his colleague reported the presence of a primeval Myristica swamp in the region—the northernmost distribution of these fragmented relic forests, which are a treasure trove of species. The swamps also harbour crabs—one of the main components of the diet of small-clawed otters.

Outreach programs are a large part of Indulkar’s work and he has been educating children in schools on the importance of otters in riverine ecosystems. His team even held an ‘otter festival’ at a school in a town called Sateli bhedshi in Dodamarg taluka and children from other nearby schools were also invited. Children were engaged through poster exhibitions, presentations by wildlife experts, hands-on activities, books and even a play with mascots.

Indulkar has been capitalising on the role of otters in river ecosystems. “First” he explains “that it is a top predator and also known to be an indicator of riverine health and the second thing is that it eliminates diseased fish.” Otters feed on fish, crabs, frogs and even snakes on some occasions. Once a disease strikes fish, “it tends to spread very rapidly and this can be a loss to the fishermen community.” Consequently, he stresses, “it is good to have otters in the rivers.”

Since Tillari is the northernmost extent of small-clawed otters in the Western Ghats, Indulkar has been warning the villagers that “if they vanish from here, they would not exist in the checklist of Maharashtra state.” He tells them that it is a collective responsibility to conserve these elusive animals.

In a play put together by school children, a child played the role of an otter mascot and another student wore a tiger costume. Indulkar explains that in their conversation, the tiger says “I am the king of the jungle; I kill prey and maintain the ecosystem” while the otter replies “I am also the king of Tillari River; I kill the diseased fish and maintain the health of the river system.” The children enjoyed the play, Indulkar recalls. 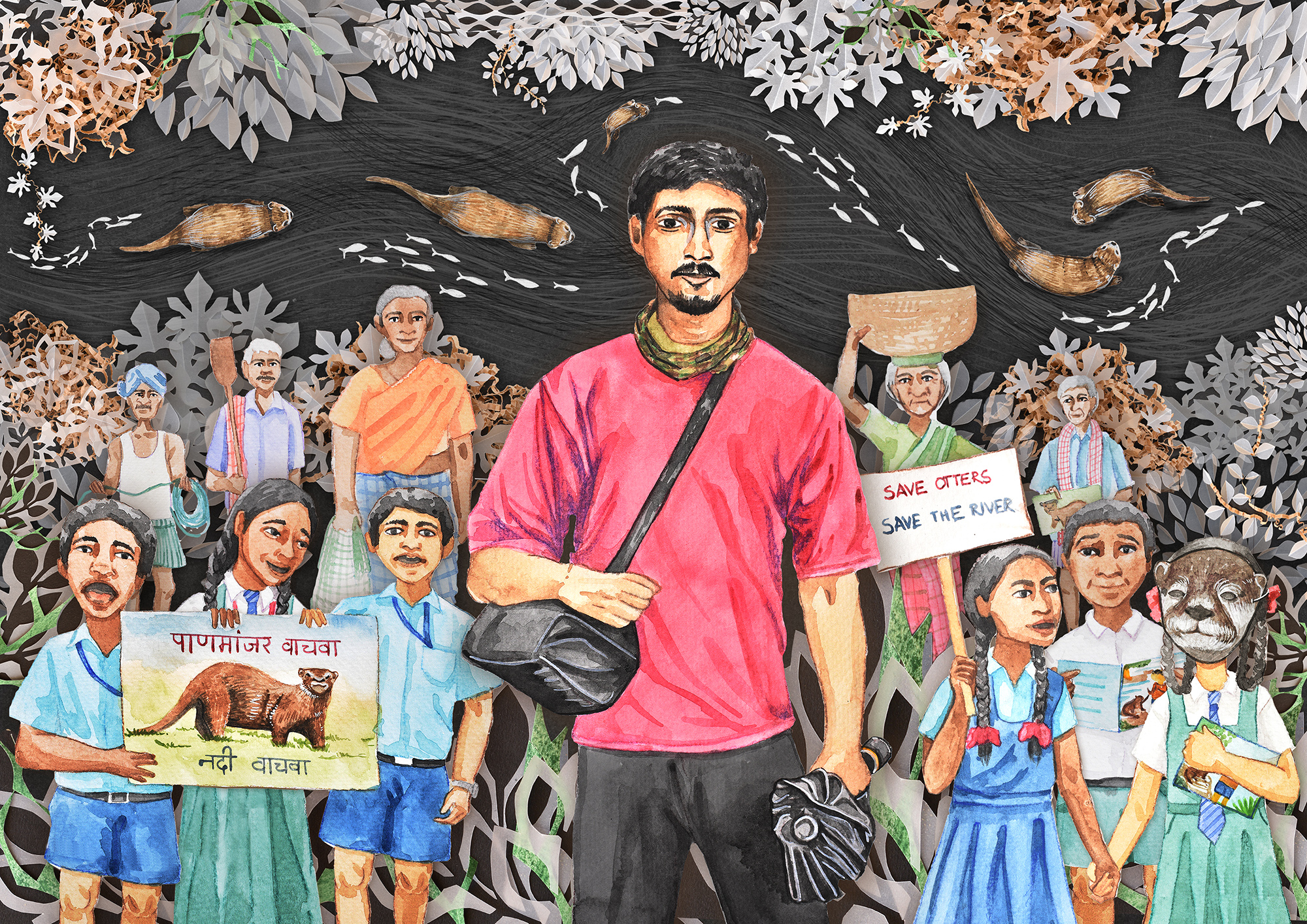 Malhar Indulkar is working to conserve otters and their riverine habitats in the Tillari region of Maharashtra. He engages with children in interactive activities such as an ‘otter festival’ and involves fisherfolk to include sustainable fishing methods that would protect fish stock and the habitat too. Illustration by Labonie Roy for Mongabay.

For the past three years, Indulkar has been surveying the tributaries of Tillari river in the Maharasthra region and small streams for the presence of otters. During his surveys, his team found something unexpected: bleach packets and electric coils. These were used for fishing. “We found that the pressure of non-traditional fishing in the streams is quite high there so we started working on that.”

They started awareness programmes in the village where they explained the ecological effects of using bleach and electric coils. When bleach packets are released into the river in high-water streams, this affects fish and other organisms a few kilometres downstream, explains Indulkar. Mass fish kills occur downstream. He told the residents that when one engages in such fishing practices, “you tend to lose fish that are not edible, even the fingerlings (the small, juvenile ones) get killed” which could contribute to reduced fish populations.

Indulkar personally visited 60 families in Konalkatta village to raise awareness for otter conservation and to understand the perception of the residents towards the river. He noted a drop in the number of bleach packets from 10 in his first survey of a 3-km stretch to two in the following year. This could be, in part, due to the awareness programmes.

Another successful initiative was ‘fish plot conservation’. During the early monsoons when fish migrate upstream into fields to spawn, fisherfolk usually catch fish. It’s a social activity for them, says Indulkar. After meeting the local fishermen, his team mapped the fields where fish spawn and approached the owner of those fields to ask if they would be willing to abandon fishing in their plots for that year to ensure a healthy population of fish in the river in subsequent years. The owners agreed after which Indulkar proposed it in the gram sabhas of Hevale, Tervan Medhe and Konalkatta villages where it was endorsed. This way large tracts of plots were conserved, says the young conservationist.

Getting new ideas to conserve otters and their habitat keeps Indulkar motivated. “I have this thing for sacred groves as well, so I keep on thinking if there can be a ‘river sacred grove’” or a ‘mangrove sacred grove’.” Now, he is working on community-conserved stretches along Terekhol River, some of which have the concept of a ‘sacred pool’ where people avoid fishing.

“I am constantly thinking if more such areas can be created along the river.”

A new conservation reserve and more in the offing

Wildlife surveys in Tillari have been scarce and Indulkar feels the region is underrated. Recently, however, some researchers have begun to explore the region. Early 2019, researchers reported sighting the Malabar Tree Toad, which is endemic to the Western Ghats, at a record-low altitude of 113 metres in Tillari and this finding expands the range of this species. Late 2019, a new plant species was described from the high-altitude plateaus of Tillari in Kohlapur district. It was aptly named Chlorophytum tillariense. Only found in an area of 2 sq km, the plant is closely related to another species reported from the region.

Girish Punjabi, a conservation biologist, now at the Wildlife Conservation Trust, had set up camera traps for tigers in Tillari in 2012. “We just wanted to get pictures of tigers moving in that area so we did that for about 2-3 years and in 2014 we got the first pictures of tigers using the Tillari area,” he said. Consequently, the Maharashtra Forest Department (MFD) began an initiative to declare Tillari as a protected area. In 2017, Girish submitted a report to the MFD based on his earlier tiger sightings and the results of large mammal-monitoring surveys in the region, which strengthened the case for a protected area. Other researchers and conservationists were also involved.

A few years passed and there were many legal and land ownership issues. In June, their efforts finally materialised: The Maharashtra government declared about 30 sq km of the Dodamarg forest range in Sindhudurg district as ‘Tillari Conservation Reserve.’ However, lands outside of the conservation reserve are privately owned. “If you look at the outer boundaries of the conservation reserve, the total area is about 110 sq km. So almost 80 sq km of land is not with the forest department or the government, it’s with people.”

In an effort to maintain forest connectivity along the Western Ghats for tiger dispersal, the Maharashtra forest department, this month, further proposed the declaration of 11 conservation reserves (CR). Among them, Chandgad CR at Kohlapur covering an area of 225.2 sq. km has been suggested that connects the Tillari CR with Karnataka’s Bhimgad Sanctuary and Dodamarg-Amboli CR (56.9 sq. km) connecting Tillari with tiger breeding areas of Bhimgad Sanctuary and Mhadei Sanctuary.

Such a move will cease the possibility of mining projects in the ecological buffer areas, says Indulkar, adding that the “provisions under CRs may help raise sustainable livelihoods to local communities living around CRs.”

Illustration by Labonie Roy, a mixed-media illustrator and designer. She is inspired by nature and loves spending time with insects, trees and dogs.