A community-created mangrove forest protects a village from eroding away

Kendrapada district in Odisha hosts the famous Bhitarkanika National Park, home to a mangrove forest which is one among the two Ramsar sites from Odisha. The site, spread in an area of around 672 sq.kms has several species of mangrove plants that act as a protective layer to the land from the harsh oceanic waves emanating from the Bay of Bengal.

Along the periphery of Bhitarkanika lies the village of Badakot, which is vulnerable to natural disasters and highly prone to erosion from the brackish water river which runs along the village at one side.

However, erosion and its threat had never been an alien phenomenon for the villagers of Badakot. Most of the people currently living here shifted to the village in phases between 1971 and the late 90s, after being displaced from the village of Khirokot which was engulfed by the rough waves of the sea.

Now, the village has a unique success story to tell, of how its people transformed a large patch of wasteland into a dense mangrove forest to make their new habitat climate-resilient.

The village now has around 25 acres of a mangrove ecosystem which helps fight the impact of river erosion with species of the genus Avicennia, Bruguiera, Rhizophora, Sonneratia, Kandelia and more. The community-created forest hosts several seasonal migratory birds like openbill stork, ibis as well as reptiles, wild boar, hyena and other animals.

The current lush mangrove forest is a consequence of more than 12 years of uninterrupted toil of the local community which was mobilised by an animal lover in the late 2000s – Bijay Kumar Kabi.

Now in his 50s, Kabi is an avid reader on environment topics, an animal lover and environmentalist from Pattamundai area in the district. The villagers told Mongabay-India that they attribute a larger chunk of the credit of the forest creation to Kabi for his relentless efforts to conserve the wetland and transform a wasteland into mangrove forests.

“Fifteen years ago, the periphery of the village was nothing but a large stretch of flat wasteland with low green cover. The threat of erosion was also high. Kabi came as a ray of hope for us as he started mobilising the community to go for massive plantations in the area. It took some time but soon all villagers were on board,” said Kalu Mallick, a resident of the village who also works as a volunteer caretaker of the community mangrove forest.

Kabi said that it was not a smooth start but slowly it gathered impetus. “Initially it was tough to get all villagers to sit together to find the solution to tackle the threat of river erosion. But consistent attempts helped us to bring all under one roof,” he said.

Kabi, the son of a farmer, was earlier working in the area through his local organisation Action for Protection of Wild Animals (APOWA) for animal welfare and other environmental issues. However, once he witnessed the plight of the village owing to the erosion threat, he decided to dedicate more of his energy to tackle the issue.

The changemaker was born and brought up in Kendrapada district and had personally seen the extent of damage the super cyclone of 1999 did to the coasts of Odisha and how strong mangrove belts witnessed lesser damage even during the strong cyclonic waves.

“I have seen the devastation that cyclones cause coastal ecosystems and have learnt the importance of mangroves in fighting against cyclones and threats from sea like coastal erosion. During my two decades of groundwork in Kendrapada I have learnt to understand how mangroves have helped the area to fight adverse climate conditions. My understanding pushed me to experiment with the idea of going for a massive mangrove plantation in the area,” he said.

Kabi organised awareness sessions to make the community aware of the importance of mangroves in wetlands like theirs, training camps for the villagers to get them trained on mangrove plantation and also ensured the smooth flow of seeds with the help of the local forest department.

The mangrove forest now stands tall, parallel to the eroding river and as per Kabi, is home to 32 species of mangroves. According to the 2002 Ramsar citation for the Bhitarkanika mangroves of India’s 58 recorded species of mangroves, 55 species were found in Bhitarkanika – a wider mangrove diversity than in the Sundarbans. Like many mangrove areas, the dense coastal forests provide vital protection for millions of people from devastating cyclones and tidal surges, it says.

While the mangroves are protecting the village, the villagers are also getting firewood and grass in return. 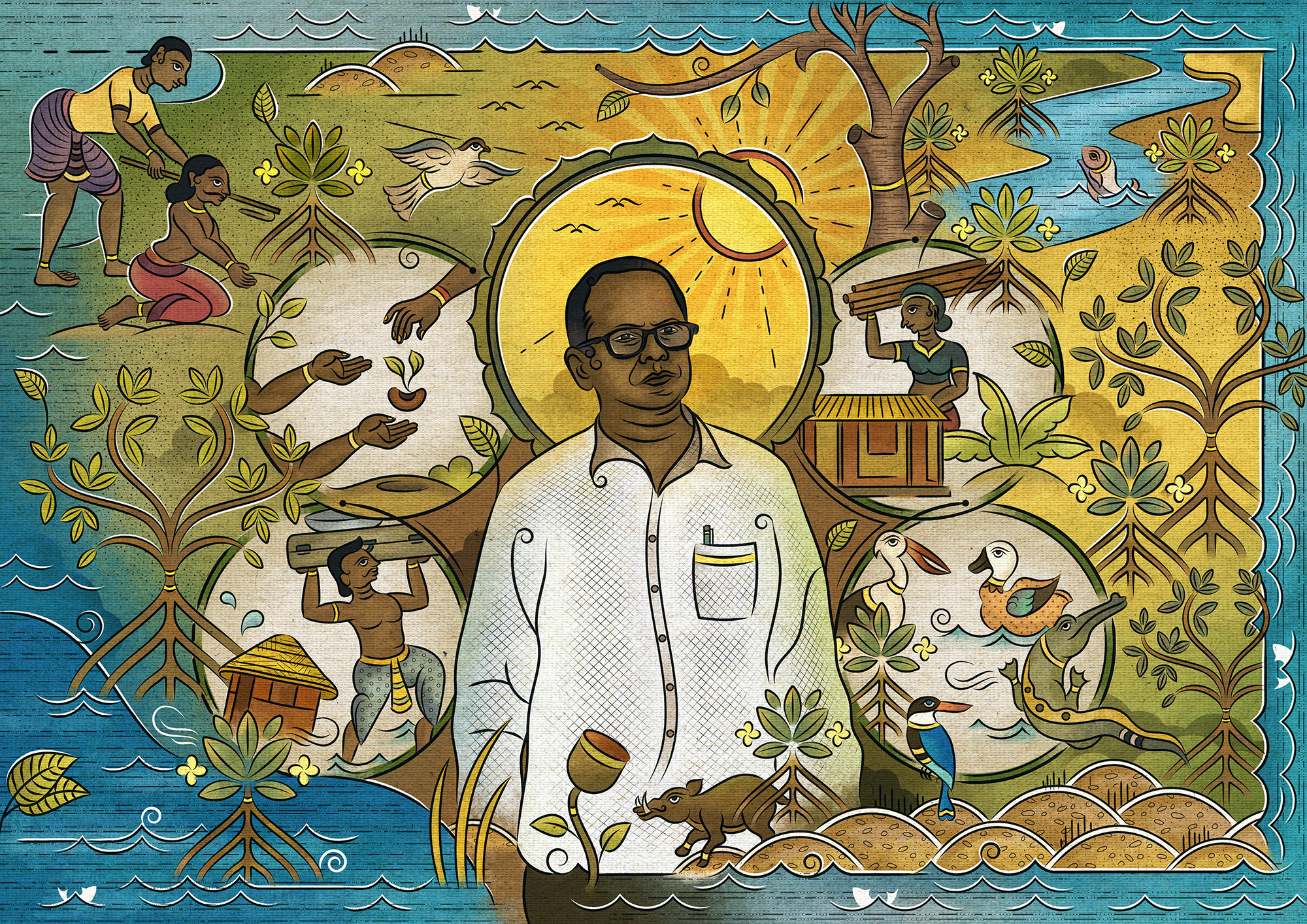 Bijay Kumar Kabi led the community in Badakot to develop a 25-acre mangrove forest that protects their village from eroding away. Kabi negotiated with the forest department and others for seeds, training and other resources to ensure scientific mangrove plantations. Illustration by Sudarshan Shaw for Mongabay.

Leading the community and authorities toward mangrove conservation

Owing to the contributions of Kabi, the local forest department has given him the designation of Honorary Wildlife Warden in Rajnagar Wildlife Division in appreciation for his work towards mangrove and wetland conservation.

Besides working with the community, the environmentalist also negotiated with the forest department and others for seeds, training and other requirements to ensure the mangroves are grown scientifically and the toil of the community doesn’t turn futile.

Niranjan Mallick, a 52-year-old farmer from the village said the process of forest creation started in 2008 after Kabi’s intervention, but, many people moved to better and safer places in between. “The upper caste people often moved to better places and most Scheduled Caste (SC) community people lived here and fought to make it suitable for living. Most of the village households here are kuccha (temporary) houses while few pucca (permanent) houses are also there. This village has a pre-dominated SC population,” said Niranjan.

Several others who have been living in the area for a long time told Mongabay-India that after seeing their houses getting into the sea, they had learned the importance of mangrove belts. “In the earlier village, we had seen degradation of the mangrove belt and understood its importance. After the mangrove forests came into existence in Badakot we have seen reduction of erosion impacts. Now we have around 50 households and all of us are committed to protect the forest. We guard the forest in rotation from any external threat,” Abhiram Mallick, a 62-year-old villager said.

Kabi also said that the local community had an understanding of mangroves and their role in protecting wetlands from the threats of erosion and that is why slowly the movement of creation of the forest got impetus. Kabi tried to blend his understanding and expertise with the traditional knowledge of the community as well.

Badakot is around three kilometers away from the sea mouth and at the periphery of the swampy waters of Bhitarkanika. Due to its proximity to Bhitarkanika and its swampy waters, crocodiles are also found in the river which runs parallel to the village.

A creek also passes from the river to the mangrove forests which has helped some villagers to fetch some fish and prawns from the small water body and boost their livelihood options. Most of the villagers here however are poor and most rely on agriculture. Some fragmented series of houses of the village at a distance belong to some affluent people too.

Legal experts however claim that due to lacuna in legal frameworks, the legal ownership of the community which created the whole forest and made the village climate resilient cannot legally acquire.

Sankar Prasad Pani, a lawyer with the National Green Tribunal (NGT) who deals with forest issues said, “Earlier there was a concept of social forestry where the ownership of such lands could be given to the community who created it. However, the provision was encouraged by the government earlier but by the end of 2000, it was abolished. Now they cannot legally take the ownership despite their contributions,” he said.

Illustration by Sudarshan Shaw, a graphic artist, a communication designer, and an avid sculptor from Bhubaneswar, Odisha. He strives to devise a visual dialect that brings the smell of the land, the voices of its folks, and the wisdom of their ancestors together.