[Photos] The invisible farmers of Mumbai

by Geetanjali Gurlhosur on 6 July 2021

More than half the world’s population is projected to live in cities by 2050. This raises the question about the availability of green spaces and resources. The Covid-19 lockdown rekindled the interest of urban residents to grow food in their own terraces and gardens. The benefits of edible gardens, like cooler and cleaner cities, healthier ecosystems, and healthier bodies, resurfaced in conversations. The urban farming discourse has been expanding over the past few years. But in the prominence of this discourse are urban people from the middle and upper class with access to technological innovations.

In Mumbai, the financial capital of India, shadowed by the limelight on urban farming, are some invisible and unrecognised farmers. Low-income groups, people with marginalised identities and indigenous people face exclusion in this dialogue. This leads to a higher probability of the erasure of their contribution, and expulsion from research, policy and planning.

The Aarey Milk Colony was originally a 3,000-acre forested area in the middle of Mumbai. The colony was demarcated as a no-development zone in 1949. The area has been home to 27 tribal villages or padas for centuries. Over the years, the land has been used to accommodate various real estate and urban infrastructure projects. As of 2020, around 600 acres of the milk colony land is demarcated as forest, by the government.

Parts of the tribal villages and their farmlands have disappeared gradually. The natives of this urban forest are generational farmers, fishers and livestock rearers, and the most affected by constant concretisation and urbanisation. All indigenous farmers in Aarey pay a minimal annual tax of one rupee per gunta (approx. 1000 square feet of land).

In other hidden farms of Mumbai, agricultural migrants from north India work on the government-owned railway land and cultivate vegetables to cater to the needs of city dwellers. Since 1975, Indian Railways began putting its vacant land to use under the scheme ‘Grow More Food’. Intended to protect its surplus land from encroachment and to prevent new slums from developing, the policy allowed railway employees belonging to Scheduled Caste/Scheduled Tribe/Other Backward Classes and Economical Weaker Sections, to cultivate seasonal vegetables on a five-year lease of 4,000 rupees per acre per year. Some of these employees, in turn, hire agricultural migrants to cultivate and oversee these railway farms. 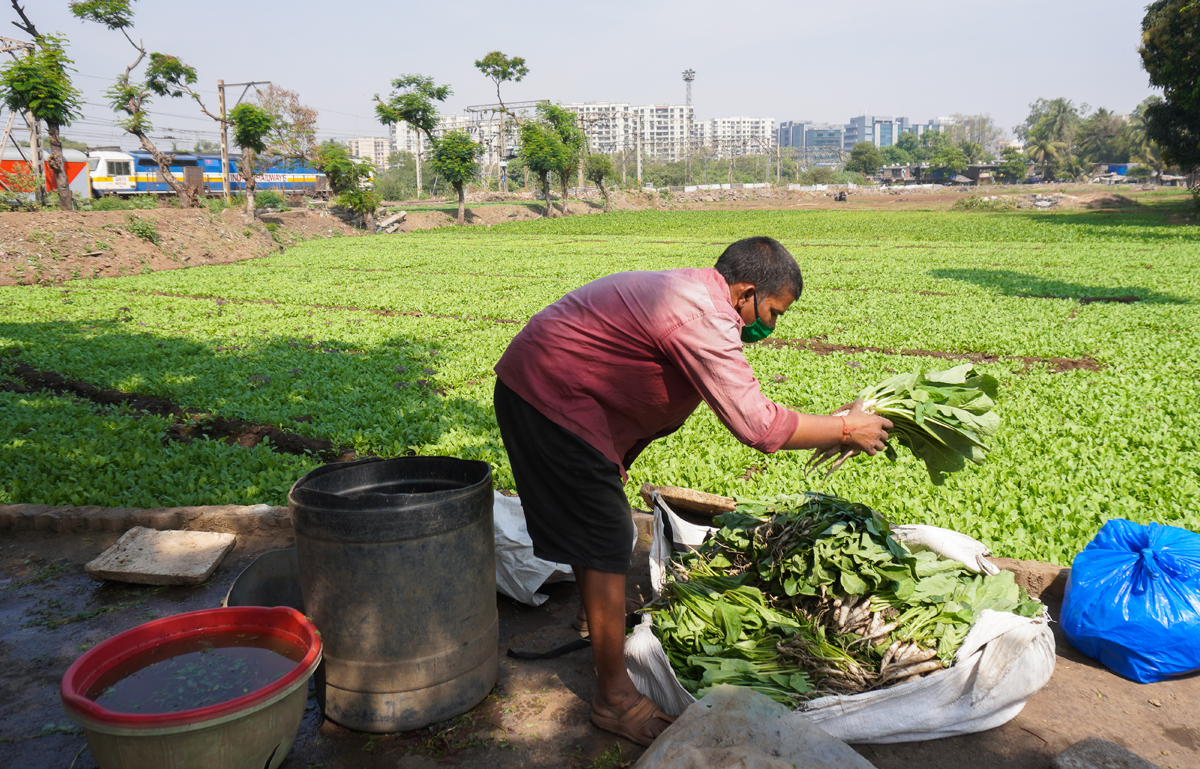 In the 4.5-acre railway farm managed by the Chauhans, a labourer cleans radishes with water from a bavdi (well). The Chauhan’s have in turn employed six agricultural labourers to sow, harvest and sell the produce here, each of whom gets paid Rs. 6,000-7,000 a month. The farm produce is sold to local residents of Chembur, Ghatkopar and Kurla. Photo by Geetanjali Gurlhosur.

Aarey Milk Colony, which used to be one of the state’s biggest milk suppliers almost 70 years ago, is still home to over 30,000 buffaloes and many cattle-rearing migrant families from Gujarat, Rajasthan and Uttar Pradesh. Of the 32 units of cattle sheds, four have been shut now, according to the locals. Over the past two decades, cattle rearers of the milk colony have gradually stopped selling buffalo milk to the Aarey Dairy because of the falling prices. While the Aarey Dairy today pays 25 rupees per litre, private wholesalers pay 30 to 32 rupees per litre and the retail price of buffalo milk is 60 to 66 rupees per litre in the city.

Other challenges that the dairy farmers face are bad roads and a shortage of electricity in Aarey, which disrupts their milk production and distribution. Aarey’s cattle rearers want to be recognised as farmers in the city. A dairy worker that the author spoke to, said that transporting buffaloes for dairy is easier than transporting cows because of the controversies surrounding cow slaughter.

Some of Mumbai’s women sanitation workers began small-scale farming for an additional source of income and nutrition during the COVID-19 lockdown. Since January 2021, the collective-based organisation Stree Mukti Sangathan (SMS) has been training the low-income, Dalit and Bahujan sanitation workers, in horticulture. With over 2,000 women, SMS runs self-help groups that work in urban waste management, employment opportunities and women’s rights. Since 1998, it has been running ‘Parisar Vikas’ programme, which addresses the problems of waste management, environment-friendly practices like composting and gardening in the Mumbai Metropolitan Region. 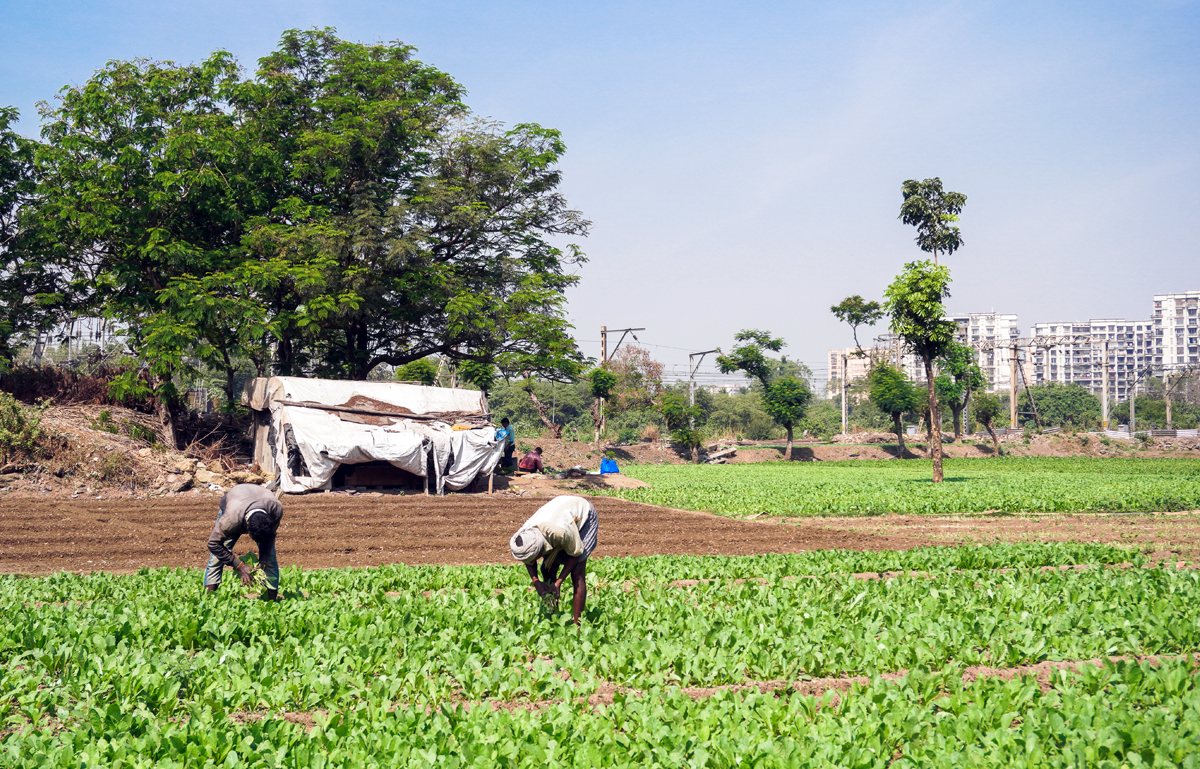 Agricultural migrants working on a railway farm in Kurla, that also houses their makeshift residence adjacent to a railway track. The labourers earn up to 6,000-7000 rupees per month. Photo by Geetanjali Gurlhosur.

This research was conducted as part of the fellowship with the People’s Resource Centre and its project ‘Urban Agriculture Case Studies in Indian Cities’.