It is 7 a.m. but inside Borvan city forest, the last vestiges of the night still hang heavy. Birds chirp relentlessly and a few morning walkers try to sweat it out but the cool breeze makes it impossible. To walk inside Borvan, in the central Indian metropolis of Bhopal in Madhya Pradesh, is to take a leisurely stroll in a thick, old tropical forest with the cacophony of peacocks shrouded in the green. Borvan is a young forest, planted about two decades ago as part of the Bhoj Wetland Project, undertaken for the conservation of the Bhoj wetland and Bhojtal, a Ramsar site imperiled by soil erosion and degrading water quality that started four decades ago.

The wetland abutting Bhopal is now home to over 250 species of birds. According to Ramsar, the wetland comprises twin human-made reservoirs – the Upper Lake and the Lower Lake. The Upper Lake was created in the 11th century by the construction of an earthen dam across the Kolans river, and the lower was constructed nearly 200 years ago, largely from leakage from the Upper, and is surrounded by the city of Bhopal.

As Bhopal grew and used up water resources more quickly than it regenerated, leading planners reached out beyond the city for new supplies. The Bhopal Municipal Corporation dealt with the increased demand for water by diversifying sources to include local reservoirs (mainly Bhojtal), groundwater and more distant resources, according to a recent study.

A number of nature-based solutions, such as the generation of Borvan forest, increasing the storage capacity of the lake through de-silting, control of weed through de-weeding, nutrient reduction through the introduction of grass carp, organic farming etc. were implemented to restore Bhopal’s Upper Lake and the Bhoj wetland as a whole. The efforts that were implemented between 1995 and 2005 are now showing results. One of the very first examples of eco-restoration in the city is the Van Vihar National Park, a protected area of 445.8 ha next to the Bhojtal wetland. 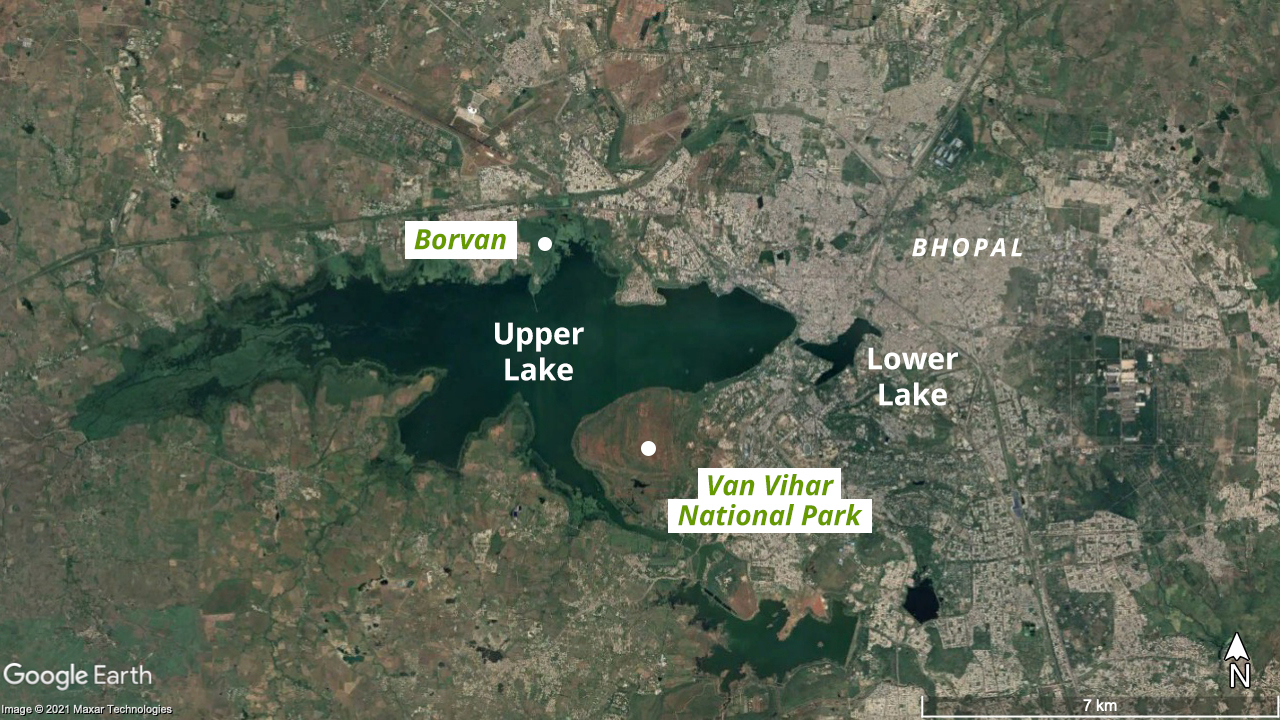 Scientist Pankaj Kumar at Indian Institute of Science Education and Research (IISER) Bhopal, a co-author of the study on baseline understanding of trends in the ecology, water quality and uses of Bhojtal, says despite some nature-based management initiatives, there is little progress in curbing on-going groundwater depression and declines in lake water level and quality.

“The research highlights the fact that appropriate attention is required to regenerate the local resources such as forests, catchment area or grass that prevents siltation, rather than depending on other catchment sources for sustaining the local ecosystem services, which have already shown a significant decline in the recent past,” Kumar told Mongabay-India.

Bhojtal is fed by a primarily rural catchment (area of land from which water flows into a water body) of 305 or 361 square km spanning 84 villages in Sehore and Bhopal districts. As much as 80% of the catchment is under agriculture, 5% is forested and the remainder is urban though increasing in proportion.

Kumar says the nature-based solutions need more attention to appropriately tackle the climate change impact on the circulation of water in the regional catchment from which water flows into the Bhojtal wetland. The Bhojtal wetland can function in the future under changing climate if appropriate measures are taken into account with long-term planning and preparedness.

“Scientists have given several suggestions, like engineering solutions, hybridisation of technology, water harvesting, improved knowledge about regional catchment hydrogeology, etc. If these interventions are adapted appropriately, they will help resilience for both population load and climate-change impacts in future,” Kumar explained.

Conserving the catchment to protect the wetland

“The hilly slope adjacent to the Upper Lake was a denuded area with brick kilns and infertile land. The water run-off during rains collected in the lake, increasing siltation. The area was then under Revenue Land and private agriculture landowners of Prempura, Dharampuri and Amkheda villages. It (the area where Van Vihar is currently located) was under a lot of biotic pressure from the habitation around the lake,” said A.K. Jain, director of the Van Vihar National Park which lies adjacent to the Upper Lake, told Mongabay-India.

The need for conservation of the catchment area to protect the wetland from degradation was prompted by a study of the land, around four decades ago, informed Jain.

“A committee was formed and this area of land was brought under Wildlife (Protection) Act 1972, and 388.89 hectares of government revenue land and 56.92 hectares of area belonging to local community members was notified as the Van Vihar National Park 1983,” said Jain adding that the success in forest growth and biodiversity restoration at Van Vihar prompted other projects.

Bhoj wetland was recognised as a wetland of international importance under the Ramsar Convention of 1971, in 2002. As part of the programme to restore the Bhoj wetland from deterioration, the Madhya Pradesh government with the financial assistance of the Japan Bank of International Cooperation, implemented a number of nature-based solutions from 1995 to 2005. The government curbed activities like cultivation, grazing and encroachment around the periphery of the lake and planted several natives species of trees around the periphery to prevent encroachment and soil erosion into the water bodies of the Upper and Lower Lakes.

As many 1.7 million trees in the area around 10 square km of Upper Lake’s watershed area were planted in 12 years to arrest soil erosion. The basic objective of the project was to improve the water quality as well as to increase the storage capacity of these lakes, points out Aniruddhe Mukerjee, Environment Commissioner and Director General at Environmental Planning and Coordination Organisation (EPCO), Madhya Pradesh.

For Borvan and other city forests, as many as 51 species of resilient plants and trees were selected for the plantation as part of the Bhoj wetland restoration project. The plants were selected for their capacity to produce biomass or medicinal properties and can tolerate extreme temperatures as well as excessive rainfall, Mukerjee said.

“We have built continuous contour walls to slow down water runoff and soil erosion, and planted Khas grass to remove toxicity of water that ultimately reaches the Upper Lake. Today there are around 700 species of plants, a large number of free-roaming herbivores like sambar, spotted deer, blue bulls, black bucks, 266 species of birds and 36 species of butterflies in Van Vihar. There are several carnivores like tigers, leopards, hyenas, lions, bears etc, but they are in enclosures for the safety of visitors. It is a blend of in-situ and ex-situ forest right in the middle of the city,” added Jain.

Subrata Pani, senior scientist EPCO, Bhopal says a lake is a reﬂection of its catchment, and measures must be taken to protect the catchment.

“Improving the soil quality was also an important part of the project as a significant part of the catchment area falls under rural areas. Many farmers in these areas use chemical fertilisers like urea and phosphates, which had a negative impact on the water quality. As part of this, we encouraged and trained farmers to use organic compost in place of chemical fertilisers. A number of organisations, including NGOs and EPCO played important roles in imparting this training to the farmers,” he added.

Sangeeta Rajgir, founder of Bhopal Birds, an NGO working for bird conservation educated several farmers on the conservation of Sarus crane in areas like Borekhedi, Bishankhedi, Khanugaon, Goragaon in the catchment area of the Bhoj wetland in Bhopal district. As part of their 2010 project to spread awareness about the diminishing population of Sarus cranes, she and her teammates also educated the farmers about the harmful effects of chemical pesticides on these birds, gradually motivating them to switch to organic fertilisers and chemicals.

Throwing light on the challenges of switching to organic farming, Rajgir said, “The problem with organic fertilisers and pesticides is that they are expensive, and sometimes not as efficient as chemical ones. Farmers already have to face several challenges, because of which initially we faced some reluctance from them. But gradually some farmers started it out on a trial basis and when they got good results, they decided to take up organic farming.”

“The number is gradually increasing. Though we do not have the exact figures, I can say that around 30% of the farmers in the Bhopal district project sites have already made the switch in these 10 years.”

Mohammad Khalique of Bhopal Birds says that the success of their interventions can be gauged from the fact that the number of bird species in the Bhoj wetland has increased significantly. “In 2002, we hardly had 30 species of bird in the wetland, but now the number has risen to more than 250. There are all kinds of local migratory and migratory birds, including grey-legged geese, red-crested pochard, and flamingos that have started coming here in winters. This is an indicator of improving water quality,” he said.

Curbing the inflow of waste from flowing into the Upper and Lower lakes has also been an important factor in restoring the waterbody. The Bhopal Municipal Corporation built several sewage treatment plants and waste collection systems to prevent solid waste from piling up in the lake.

Despite several efforts, some challenges are inevitable, says Khalique. “Urbanisation, encroachment, chemical pesticides and throwing of solid waste in the lake etc are some major challenges that we are up against. We need to keep up these efforts because people forget if we do something for a short period and then stop it. We also need to ensure that no trees are cut in these areas to keep the biodiversity from being negatively impacted,” he said.