by Kartik Chandramouli on 31 January 2022

A small waterbody littered with the city’s garbage and sewage is made vibrant by painted storks – large bald birds with bright pink tail-ends and long down-curved yellow beaks. Three individuals stand in the murky waters of the roughly 2.5-hectare Sardar Patel Lake, surrounded by a dense carpet of houses and roads, in north-west Delhi.

The National Capital Territory (NCT) of Delhi hosts over 400 bird species. As per a 2021 study, on winter birds in Delhi ponds, researchers recorded 37% of the city’s bird species in its ponds, which they defined as water bodies sizing less than five hectares.

Pied avocets wade the waters of an accidental pond, a waterlogged site next to a flyover construction project in Delhi. The bird with an unusual up-curved beak travels from Central Asia and Europe to the Indian subcontinent.

Hidden from morning walkers passing by a pond in a park, a greenish warbler flutters in the vegetation around the pond. The tiny migrant descends into Delhi during winter, year after year.

Birds in urban water bodies are a usual sight but are often ignored.

Motivated by the lack of research on urban pond ecology in India, Prakhar Rawal, the study’s primary author, decided to look closer home. The capital city’s wetlands are at risk due to encroachment, real estate activities, dumping of solid waste and untreated sewage.

“The first objective was to understand the potential of these sites as bird habitats in megacities like Delhi and to see what kind of bird diversity was supported at these sites,” said Rawal.

Out of India’s total wetland area, 15.26 million hectares, it is estimated that nearly 8% is likely to be situated within urban sprawls. While 3.64% of the country’s wetlands are less than 2.25 hectares, the only national database of wetlands denotes them as points on a map without definite boundaries and shapes. Since a detailed wetland map of Delhi wasn’t readily available to the authors, they analysed Google Earth images taken over ten years to plot the city’s wetlands. Of the resulting 574 wetlands, they conducted surveys in 39 ponds of various sizes up to 5 hectares.

“Even though ponds were 0.5% of Delhi’s area, we ended up with more than 170 bird species estimated for the ponds of Delhi,” said K.S. Gopi Sundar, a scientist at Nature Conservation Foundation and the study co-author. “That constituted 37% of Delhi’s known bird diversity and one of the highest known diversities of any urban wetland system, let alone only urban ponds.”

How authorities and communities managed Delhi’s ponds influenced the bird diversity and numbers at each location. Sundar explained that the popular notion of ‘beautifying’ a waterbody by adding concrete to its periphery is bad for birds like sandpipers who need the natural muddy edge for feeding. Also, activities such as tree plantations and manicured shrubbery, often not native to the region, attract birds that wouldn’t have naturally been there. “Nearly 50% of the birds that we found at ponds were birds that were using the vegetation on the edge,” he said.

On the other hand, researchers found that artificial pond islands such as metal fountains increased species diversity too.

Arriving in Delhi’s ponds via a highway for birds

Water birds and terrestrial birds cross international borders to arrive in the Indian subcontinent during winters. For some birds on this flight path, Delhi’s ponds are pit stops and refuelling stations in their long journey. For others, the ponds are the destination.

During the study, Rawal’s favourite moment was recording migratory ducks such as northern shovelers and waders such as bar-tailed godwits at an unnamed pond near an industrial estate in west Delhi. They would have flown along the Central Asian Flyway (CAF), one of the nine global bird migratory routes.

India plays a vital role in the CAF, which spans a large area of Eurasia between the Arctic and Indian Oceans. It provides critical stopover sites, mainly wetlands, to over 90% of the bird species known to use this migratory route. Furthermore, a vast majority of migratory waterbirds that arrive in India use urban and other human-dominated landscapes beyond national parks and sanctuaries. Their annual journey is increasingly being hindered by disappearing and degrading habitats. 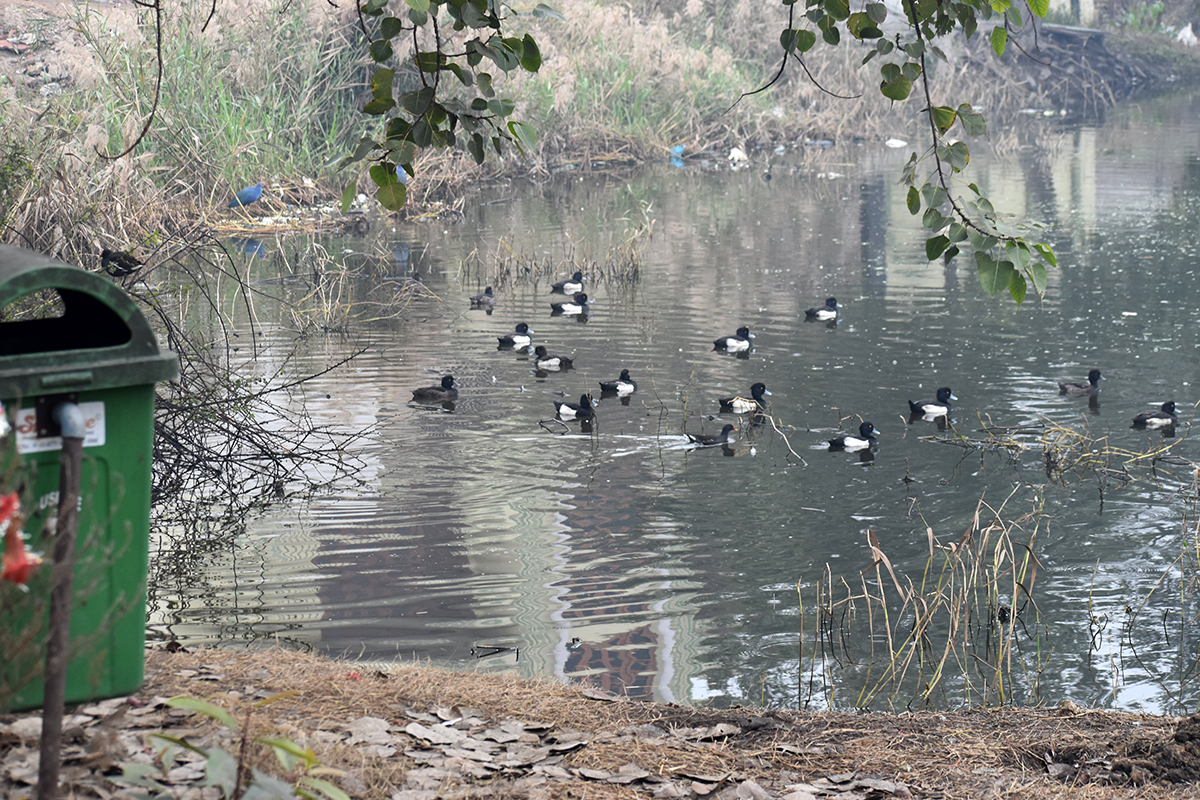 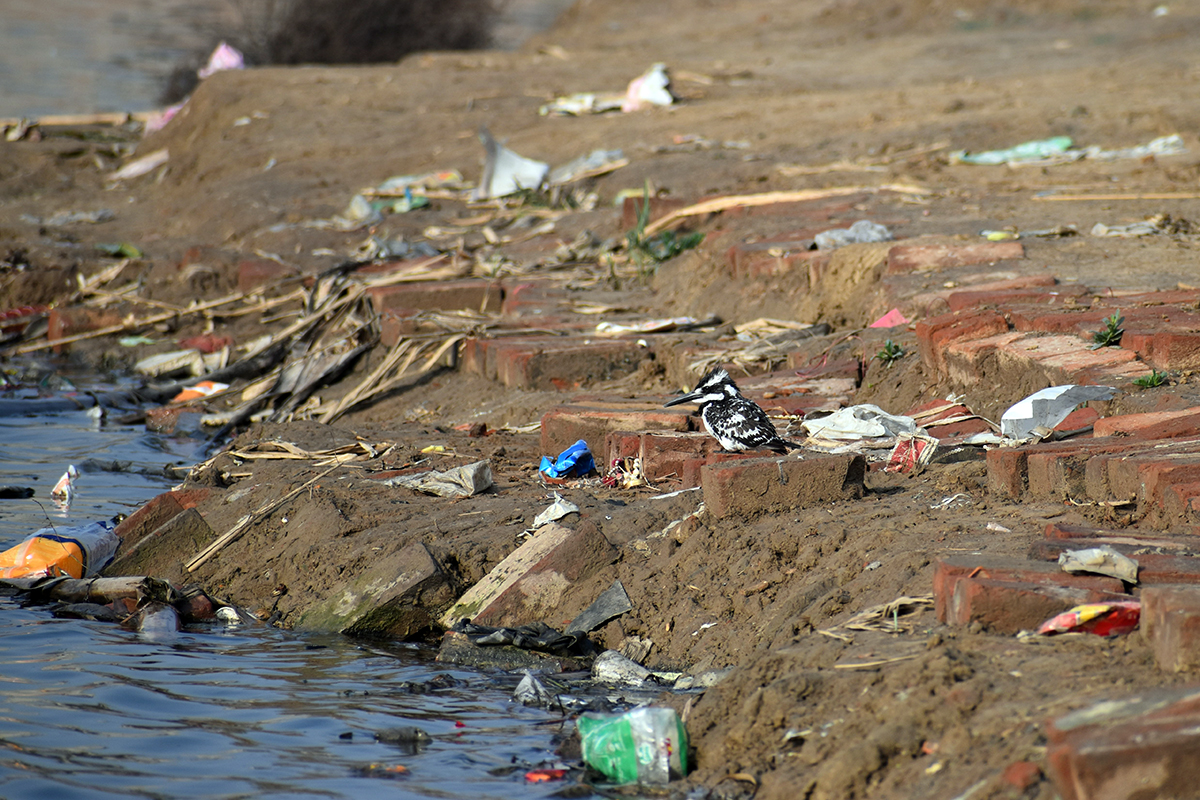 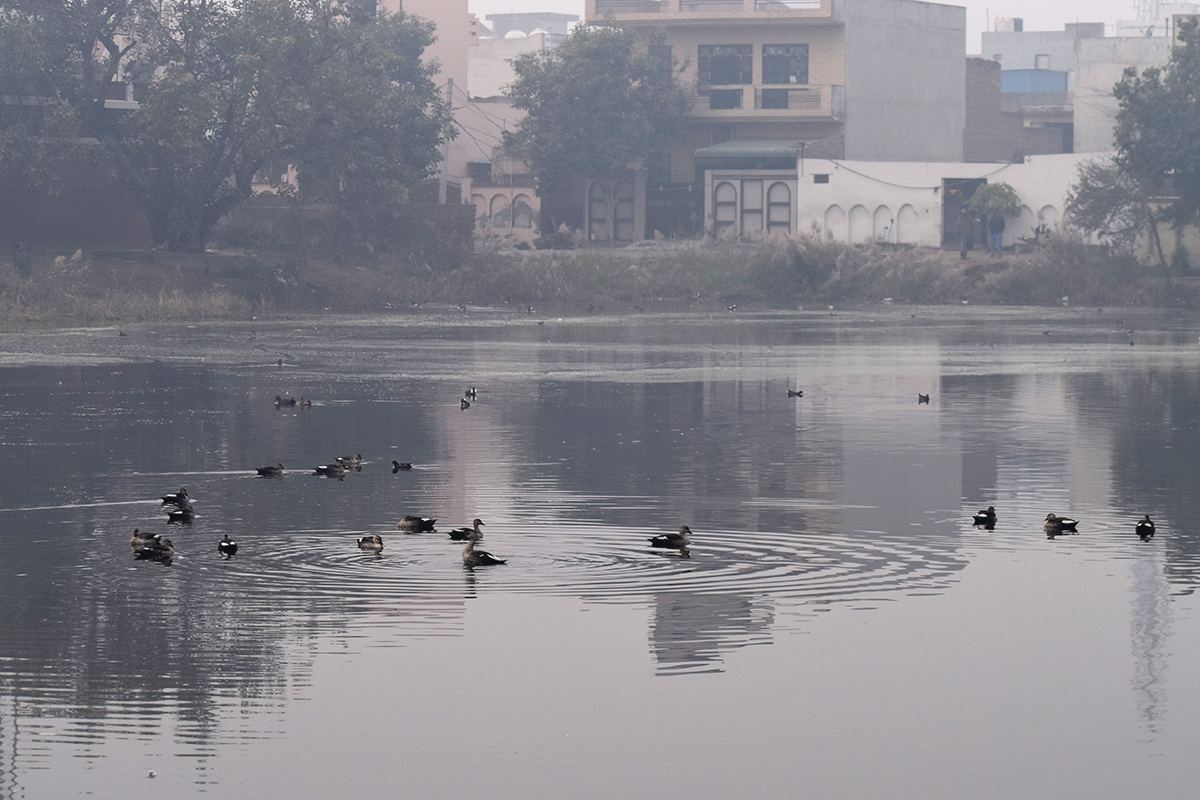 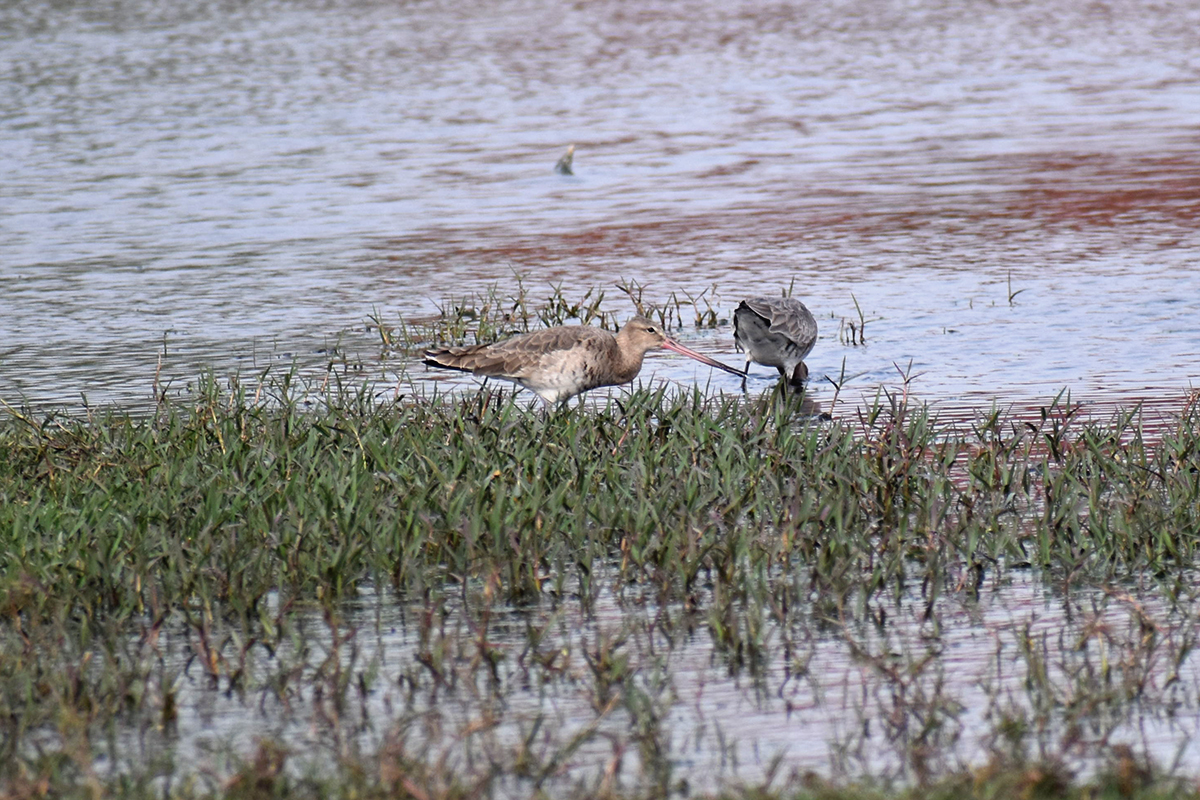 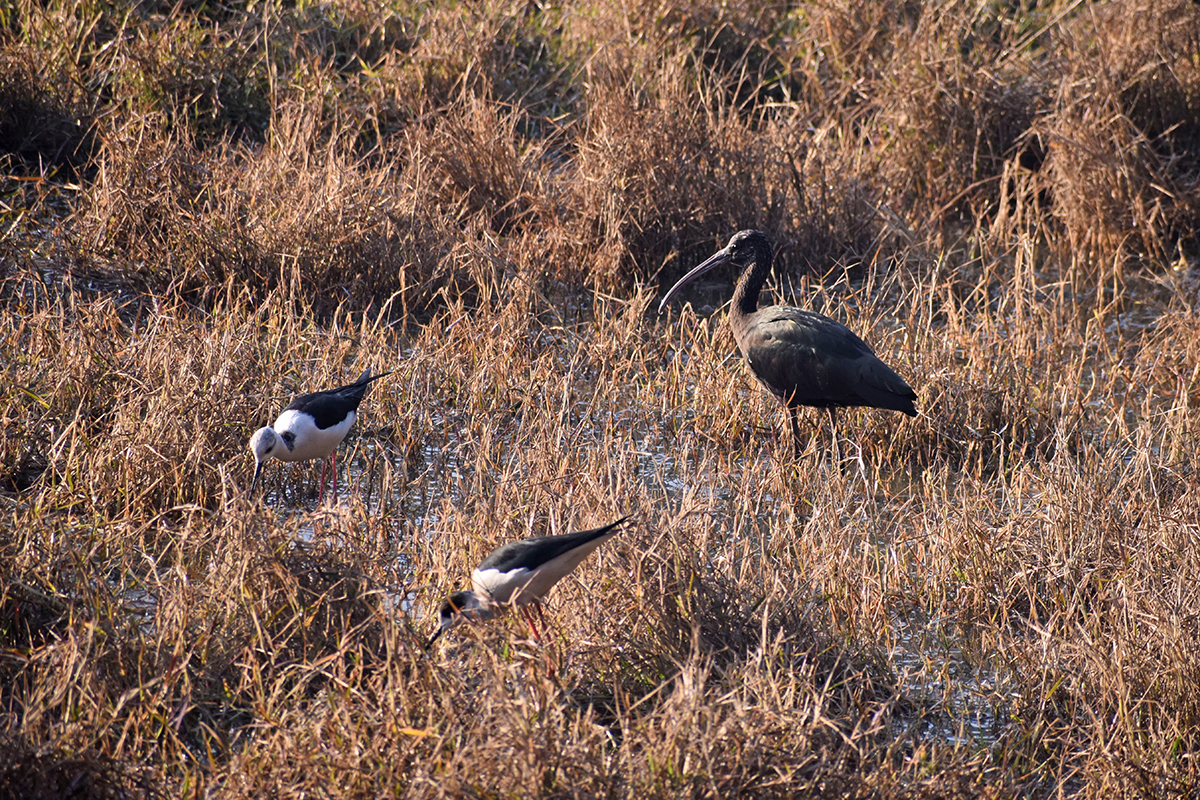 All photos by Prakhar Rawal.

According to Sundar, nearly 30-40% of the birds observed during their study were migratory. “That’s a huge proportion and number of birds to have using ponds inside a city. We previously did not know that urban ponds are also a very important place for such a large number of migratory species. So Delhiites are very lucky in the sense that this ancient phenomenon of migration is still occurring all around them.”

Monica Kaushik, who has studied the role of urban green spaces for bird conservation in the Himalayan city of Dehradun, said, “It’s important to not think about the green spaces or the urban biodiversity only in the local context.” Kaushik, who was not associated with the study on Delhi’s ponds, said that as climate change causes loss of habitats and affects wildlife movement patterns, disappearing green and blue spaces could eliminate migration links for birds.

During their study, Rawal and the team didn’t have historical checklists of birds for the sites selected. Citizen science platforms that crowdsource information from birdwatchers also revealed negligible data from the ponds. Kaushik, who was involved in a pioneering effort to analyse citizen science data for the State of India’s Birds Report 2020, feels that sites far from roads and lesser-known areas often become a “black hole” in data. If present, the information can help us understand much more about birds.

Kaushik, a visiting assistant professor at the School of Human Ecology, Ambedkar University Delhi, highlighted another reason to conserve nature within cities. “There’s an ongoing alienation from nature called the ‘extinction of experience’. We want the younger generations to experience it [the natural world] first hand too.”

Read more: How an engineer found his calling in conserving wetlands

Turning the lens to smaller wetlands

Apart from hosting biodiversity, smaller wetlands can also recharge groundwater, control floods and regulate local temperatures. All a matter of concern in Delhi and Indian cities at large.

Ritesh Kumar, director of Wetlands International South Asia, explained that the term ‘small’ could be misleading. “One wetland of half an acre might have a low [groundwater] recharge value, but a system of 20 odd wetlands in a landscape would have a sizable contribution to hydrology, ecology and everything.”

While Delhi is known for its deteriorating air quality, the NCR also lost 38% of its wetlands to conversion by construction activities, encroachments and pollution between 1970 and 2014. Kumar said that smaller wetlands seem to be the most vulnerable habitats in a growing city. While obstructing water inflow or outflow and excess groundwater extraction are certain ways to kill a wetland, rejuvenation opportunities are also the highest owing to their size, he added.

In a first attempt to map Delhi’s wetlands, which started in 2020, the Wetland Authority of Delhi has listed and given unique identification numbers to 1,043 wetlands of all sizes. The aim is to notify the water bodies officially as wetlands, which provides legal protection under the Wetland Protection Rules, 2017, against encroachment, solid waste dumping and other threats.

K.S. Jayachandran, Member Secretary, Wetland Authority of Delhi, told Mongabay-India, “Our aim is long-term conservation, and we are prioritising notification of wetlands with larger size and higher risks.” As of January 5, 2022, the authority had mapped 1,014 waterbodies on a GIS platform, and ten wetlands were in the process of being notified.

Delhi’s water bodies are owned by 16 different land agencies, creating a challenge in governance and conservation. Jayachandran added that a guideline for local agencies to follow ecological ways of managing urban wetlands would be out soon.

After being notified, the authority will create an integrated management plan and seek funds from the government for wetland restoration, including removal of encroachments, invasive species, etc.