Return of the tiger at West Bengal’s Buxa tiger reserve

“There was a road leading to Buxa Duar, which was one of the finest trails in that area. Unfortunately, that road was washed out in the 1993 floods. I was returning from a children’s camp organised in the area with a friend. We met a local kid on that road, whose gaze was transfixed upwards. I asked him what he was looking at but he didn’t reply. I thought maybe the kid couldn’t speak. I repeated my question again. Then, the boy pointed his finger towards the other side of the road. I saw a giant tiger sitting on a boulder and was looking at us. I went absolutely still. Luckily, the tiger disappeared behind the rock. The kid spoke soon after that. He had lost his voice after seeing the big cat from such close proximity.”

Animesh Bose, programme coordinator of Himalayan Nature and Adventure Foundation, who has spent a major part of his life traversing the jungles of northern West Bengal, narrates this thrilling encounter he had with a tiger in the Buxa Tiger Reserve (BTR), way back in 1984, a year after Buxa got the status of a tiger reserve.

“That was a time when many tigers were there in Buxa though sighting was never easy because of the terrain,” said Bose, who is also a member of the State Wildlife Advisory Board, West Bengal.

However, for the last two decades, there had been no tiger recorded in Buxa. That changed in December 2021, when, after 23 years, an adult male tiger was finally recorded on a camera trap, in the East Damanpur range of BTR. 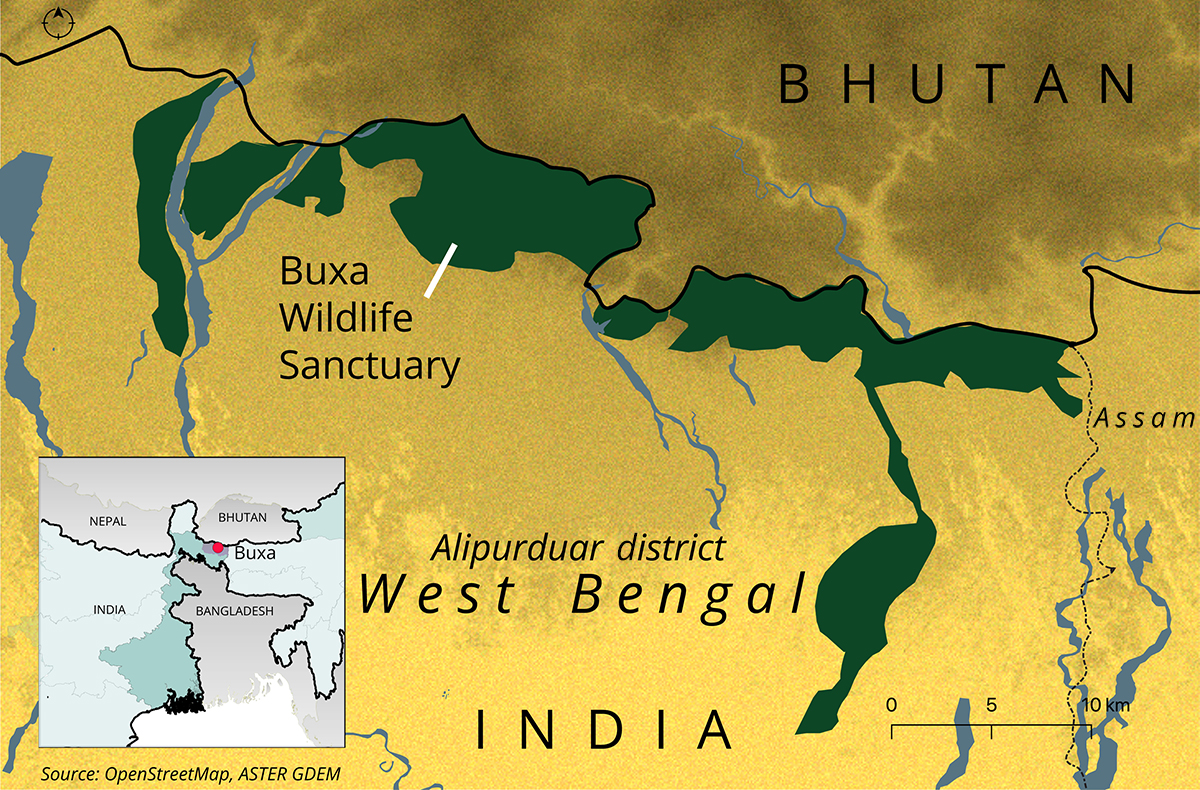 The disappearance of tigers from Buxa

Created as the 15th tiger reserve of India, BTR located in Alipurduar district of West Bengal is contiguous to Phibsoo Wildlife Sanctuary in Bhutan in the north while Manas National Park of Assam lies in the east. Covering an area of 760 sq km, BTR boasts of more than 200 species of birds, 37 species of reptiles, 73 species of mammals, including elephant, leopards, clouded leopard, gaur, sambar, wild boar, melanistic leopard or black panther and more.

While tiger sighting has never been easy in Buxa, there is no dearth of interesting local anecdotes about the apex predator. Lal Singh Bhujel, a resident of Rajabhatkhawa Garobasti, a village adjoining the forest, claimed that in the late 1980s, an elderly shepherd was mauled to death by a tiger.

Tigers lifting away cattle was common till the 2000s said another local resident, who wished to remain anonymous. The man who is a resident of Pampubasti, a forest village 500 meters from the main entrance of Buxa recalled, “Most households in our village have 100-150 bhains (buffaloes). When we were young, buffaloes would be taken away by some carnivore, which we suspected was a tiger; leopards don’t have the strength to carry an adult buffalo. Those days, we used to go to bed early by having dinner at 5 in the evening. Then, we used to hear tigers roar the entire night.”

“The local communities regularly went inside the jungle to collect NTFP (Non-Timber Forest Products). One community member had a nightmarish experience when he climbed up a tree to gather some fruits and seeds. A tiger came out of nowhere and started circling the tree. His friends ran back to the village and later,  70 men came with mashaals (torches) and sticks to chase the tiger away. The man was lucky that a tiger can’t climb trees. He is still alive. He is now around 80 years old and he still goes inside the jungle to collect NTFP,” the Pampubasti resident said.

Pradeep Vyas, Former Chief Wildlife Warden of West Bengal, who was also the Field Director of BTR in the 1990s said that even in his time, tiger sighting in BTR was rare. “During my tenure at Buxa, I saw tigers 6-7 times though I used to see a lot of pug marks those days. At that time, which was in the early 90s, there were around 25-26 tigers in BTR, though they were estimated by counting pug marks, a method not acceptable today,” Vyas tells Mongabay-India.

Explaining how tigers disappeared from BTR, Vyas reckons the carnivores were forced to leave Buxa as prey became scarce. “There are a large number of villages inside the forest and also tea gardens bordering the tiger reserve. Lakhs of domestic cattle enter the forest daily for grazing which took away the food of herbivores, the main prey base of tigers. Tigers, unlike leopards, do not like to stay in habitats that are disturbed. They are also known for covering large areas in search of food. There is Phibsoo Wildlife Sanctuary in Bhutan, adjoining BTR and tigers must have moved there in search of food.”

The return of the big cat

The process to bring back tigers in BTR started with the revival of the ecosystem during Vyas’s tenure, said Joydip Kundu, member of the State Wildlife Advisory Committee and founder-member of the NGO Society for Heritage and Ecological Researches (SHER). “Vyas started work on grassland management when he became the Chief Wildlife Warden and his work was carried forward by Ravikant Sinha, V. K. Yadava and Debal Roy in their respective tenures,” Kundu told Mongabay-India.

In 2017, the West Bengal Forest Department (WBFD) decided to translocate tigers from Assam to BTR. “We framed a tiger reintroduction plan with the help of National Tiger Conservation Authority (NTCA) and Wildlife Institute India (WII). The plan was to bring tigers from the northeast, as there were surplus tigers in Kaziranga and Orang. The steering committee of NTCA approved the plan. We decided to improve protection and increase prey base by bringing sambar and gaur (Indian bison) from Jaldapara and Gorumara,” said Vyas.

However, the translocation has not taken off. WII Scientist K. Ramesh, who is providing technical support in the programme said multiple components like capacity building, prey translocation, community sensitisation need to be taken care of before the tiger can be actually translocated from another forest.  “Also, tigers might come back to BTR on their own and we won’t need translocation at all.”

In 2019, NTCA published the fourth cycle of the All India Tiger Estimation, 2018, in which no tigers were recorded in Buxa. The report suggested that Buxa can be repopulated through reintroductions from Kaziranga after prey restoration.

Chief Wildlife Warden of West Bengal, Debal Roy informed Mongabay-India, that the plan to translocate tigers to BTR is still on and as part of that plan, the forest department is currently thinking of relocating a section of forest villages.

Recent media reports state that following the December 2021 camera trap sighting of a tiger in BTR, the forest department is planning to relocate 15 forest villages. A study highlights that 37 forest villages and four leased landholdings under control of the forest department, 46 revenue villages and 34 tea gardens surround BTR. Many of these villages are more than a century old and are home to diverse ethnic communities like the Nepalis, Garos, Rabhas, Oraons, Santhals, Rajbongshis, Bhutias.

While talks about relocating forest villages in BTR have been on since a long time, the lone village which has been relocated from the core area is Bhutia Basti. The village was relocated in 1995 after a flood in 1993 swept away majority of the households in the village. Dolomite mining which was prevalent in the area stopped after Buxa became a tiger reserve. Many local community members settled down in the abandoned huts originally built for the employees working in a dolomite mining firm after relocating. The new place where they moved to is also known as Bhutia Basti.

Rajabhatkhawa Garobasti resident Bhujel, who is also the convener of Uttar Banga Van Jan Shramjeevi Manch, an organisation working for the rights of forest dwellers said Bhutia Basti was pegged as the model which would be followed by the forest department while relocating other villages.

“As per the agreement between the people of Bhutia Basti and the forest department, there were supposed to be roads, schools, electrification and houses for every family in the place they were relocated. However, only three houses were built and 35 families were shifted. Ultimately, many families went back to their old place (the original Bhutia Basti). 15 families were again relocated to a village near Hatipota. Some families stayed back in Bhutia Basti. So, in the attempt to relocate one village, three villages were created,” he said.

Bhujel added that some of the ban basti (forest village) in BTR, affected by issues like flood and human-elephant conflict, are willing to relocate. “However, the relocation has to happen in accordance with the Forest Rights Act (FRA). If they take the Bhutia Basti model, it won’t work. We are still unclear about the timing of the relocation, how it will happen, where it will happen. Also, the forest department needs to be transparent about the compensation to be paid to the relocating local communities.”

Chief Wildlife Warden Debal Roy, meanwhile, told Mongabay-India that NTCA has enhanced the amount of compensation from Rs. 10 lakh (Rs. one million) per household to Rs. 15 lakh  (Rs. 1.5 million) per household for the relocated communities. “The forest department is having conversations with the local communities regarding the relocation. At this moment, I can say that the talks are positive,” said Roy.

Kundu said the relocation of forest villages won’t be easy. “Any relocation activity ultimately has to benefit the local communities as well. Once we have a steady population of tigers in BTR, eco-tourism prospects for the entire region will increase. Like the people of Ramnagar near Corbett National Park and Sawai Madhopur near Ranthambore have benefitted from tiger tourism, if the same happens with the forest villages in Buxa, it will be a win-win situation for all of us,” he said.

Map by Technology for Wildlife.