In a recent study, marine biologists forewarn a decline in sea snake populations at the Malvan coast, a major landing port in southern Maharashtra. The authors flag that mechanised vessels are likely to be the main cause of this decline.

“Sea snakes play an intermediary role in the ecosystem. They are prey and predators of marine fauna,” informed Chetan Rao of Dakshin Foundation, Bengaluru and lead author of the study. Marine snakes are geographically widespread species that are critical to reef and coastal ecosystems in tropical and subtropical waters of the Indian and Pacific oceans. Their removal from the system could warp the trophic balance, Rao added. Being predators, they feed on various herbivorous marine fauna but are mainly piscivores (fish eaters). Sea snakes control the fish populations, preventing over-consumption of planktons and keeping the balance in check.

But, due to a lack of data, the understanding of the influence of sea snakes on the marine ecosystem is limited.

The study was conducted between January 2016 and December 2018 at Malvan, a central part of the Konkan coast which has a shallow and extended continental shelf that is formed of estuaries, mangrove forests, coral outcrops and shallow water habitats occupied by sea snakes.

“We sampled sea snakes caught in the gill nets after the vessels returned to the port since it is a small vessel and fishers cannot sort the catch onboard. But, for sampling sea snake bycatch of trawlers, we used to be on board,” said Rao.

Researchers found that Hydrophis schistosus or beaked sea snake was the most abundant species with 914 individuals captured during the study, followed by 236 specimens of Hydrophis curtus or spine-bellied sea snake. Though other species were also captured as bycatch, beaked and spine-bellied sea snakes were the most common species that constituted marine reptile bycatch from trawlers and gillnets, the prominent fishing practices at the coast.

Comparing the mortality rates of both species, the authors flagged that mechanised vessels, especially trawlers, might be a leading cause of the decline in sea snake populations.

Sea snakes are protected under schedule IV of the Indian Wildlife Protection Act, 1972, which is the lowest category of protection with three years of imprisonment and a fine of Rs. 25000. In a marine system, especially if it is not a protected area, the implementation of such laws is challenging. Sea turtles and sharks still have some degree of protection but sea snakes have been neglected across the global waters, Rao told Mongabay-India.

For each sampling trip, Rao and his team recorded the species’ abundance and the duration of time for which the nets were soaked or dragged in the water. “There are single-day trawlers, which throw the net in water twice or thrice a day. Similarly, there are multi-day trawlers that are in the waters for 7 or 14 days at a stretch. The number of times trawling is done depends on the capacity of the vessel,” Rao said.

Rao and his team sampled more than 300 gillnets and about 65 trawlers over three years from 2016 to 2018. Yet, they observed that not only did trawlers accidentally catch a higher number of individuals of both the sea snake species than gill nets, the mortality rates for both caught in the trawlers was also high which included gravid females (pregnant with live young ones or egg-carrying females) as well.

Drawing comparisons from studies published in 2003 and 2009, on the abundance of sea snakes caught in trawlers along the Konkan coast, authors note that the spine-bellied sea snake numbers might be dwindling. Though injuries, the weight of the trawl catch and change in pressure when animals are hauled to the surface can cause deaths, spine-bellied sea snakes, due to their lower reproductive rate could be at higher risk, suggested authors in the study. “Even after rigorous sampling of three years, we witnessed about 1000 snakes caught in gillnets and trawlers. These numbers are low as compared to surveys conducted between 2003 and 2009, signifying a possible dip in sea snake populations,” Rao explained.

Though there are guidelines of the Maharashtra Marine Fishing Regulation Act, 1981, such as regulating the number of active mechanised vessels, fishing in specified zones, the use of gill-nets that can lower the sea snake bycatch and more, the monitoring and reinforcement of the guidelines is lacking. 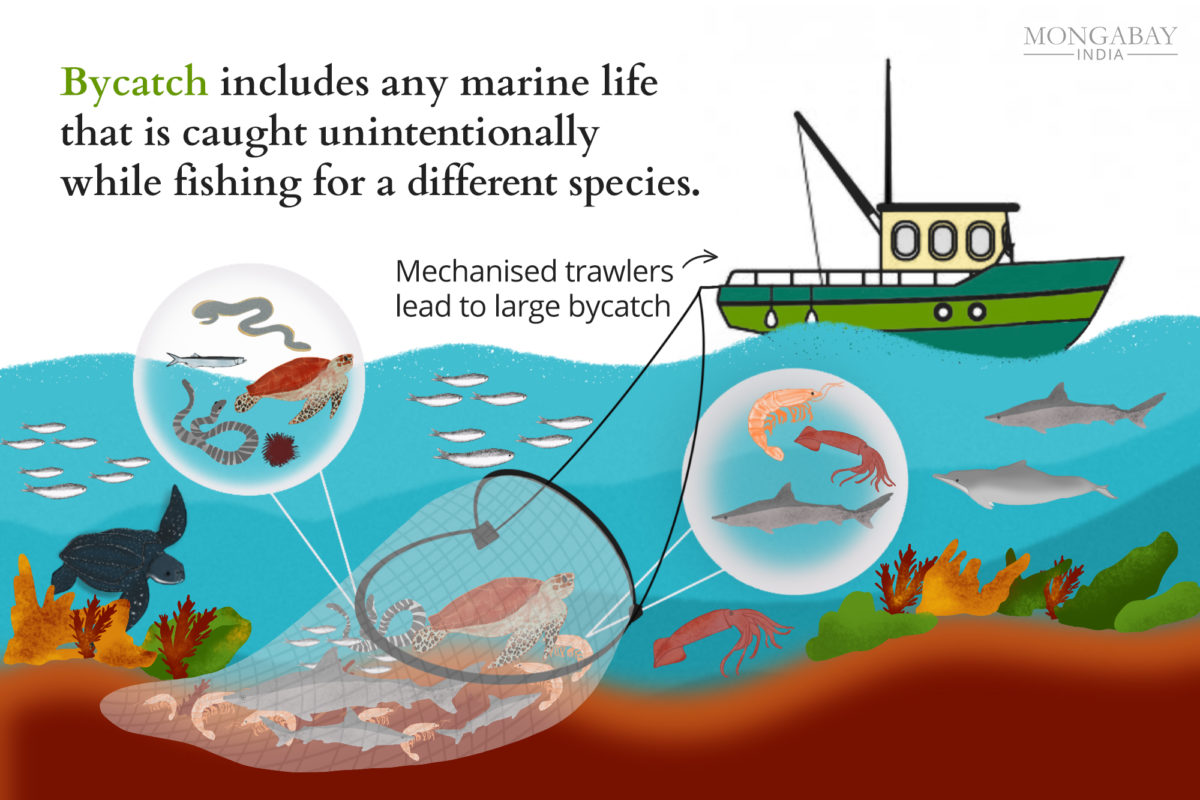 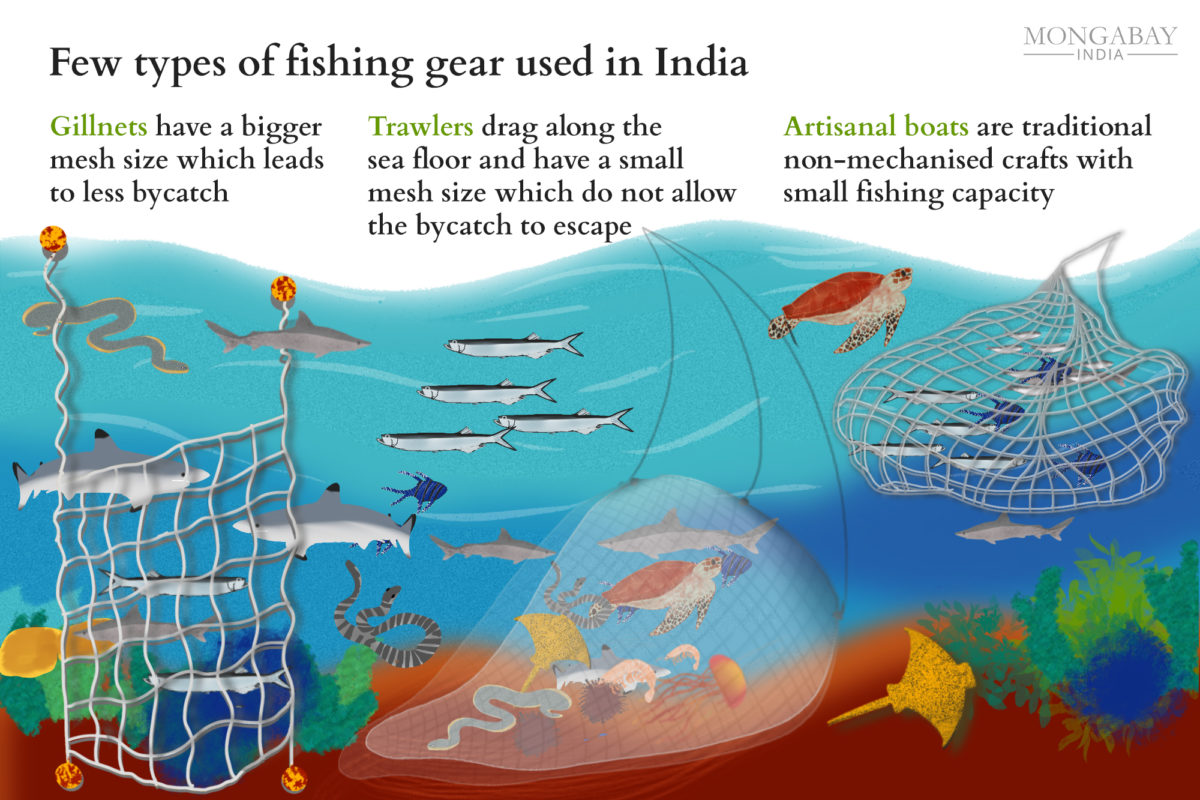 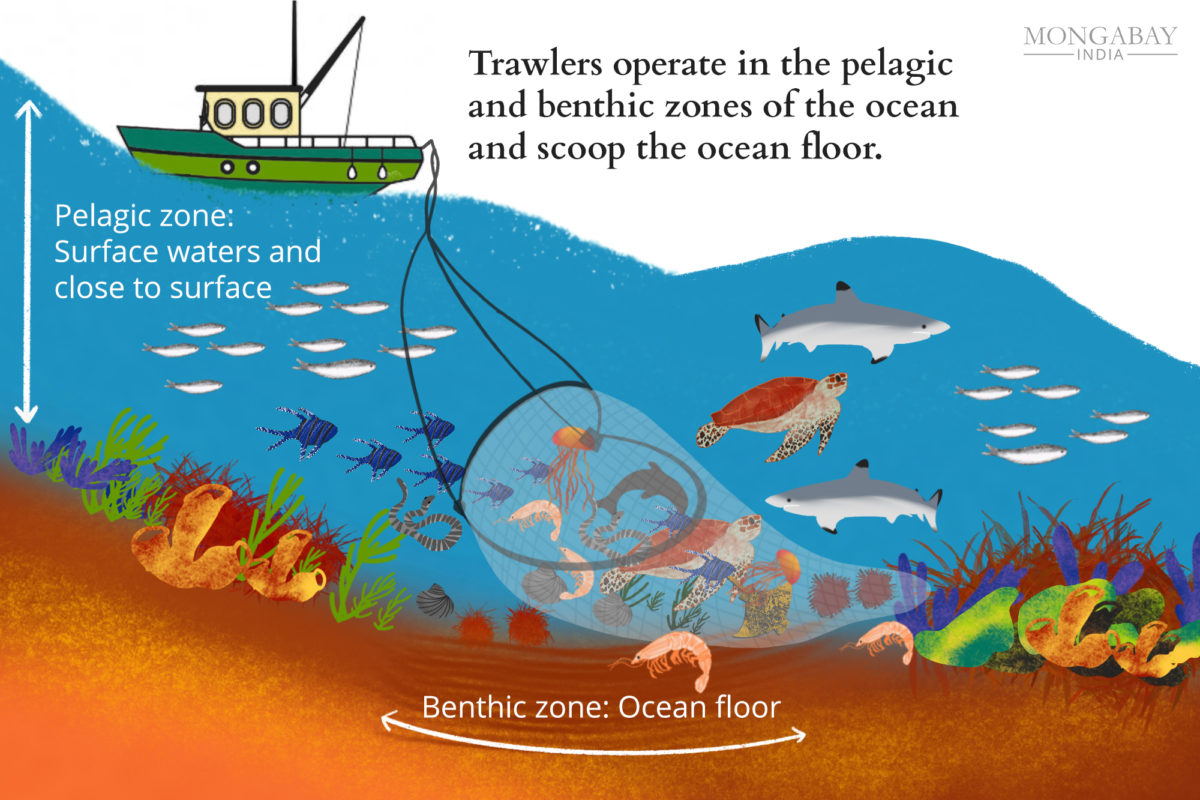 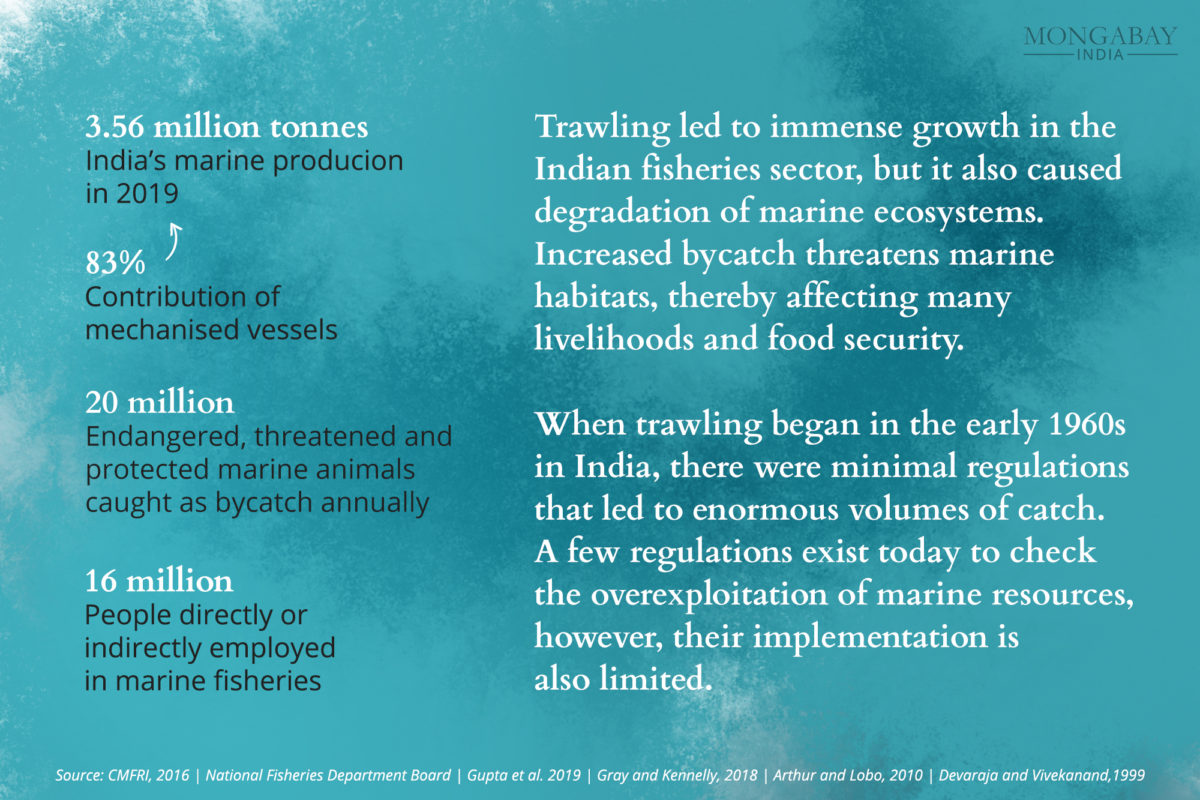 India has more than 20 species of sea snakes of the 70 species described throughout the world from shallow coastal waters with noticeably higher diversity in Australia and South Asia. Deaths due to bycatch in fish and shrimp trawling have become a threat to sea snakes throughout their range causing a dramatic reduction in sea snake populations over the past two decades.

In Australia, which is the global hotspot of sea snakes, each year about 100,000 are caught in Northern Prawn fisheries. The Ashmore Reef in Australia has witnessed such declines from 40,000 snakes at the reef to local extinctions in the 2000s due to overfishing and an increase in fishing vessels. In the Indonesian archipelago, which also exhibits rich diversity of sea snakes, a decline in species harvest has been noticed since 2009, when sea snakes became a commodity of trade, due to increased trawling, overharvesting and detrimental climate change effects.

Sea snake populations are localised, which means the individuals from a population do not travel far from the area where they are born which makes them vulnerable to local fishing pressures.

In the Malvan study, researchers found that though the proportion of catch formed by beaked snakes was high, more dead spine-bellied sea snakes were recorded which altered species composition and led to more encounters of beaked sea snakes. The difference in habitat use, destruction of preferred habitats, the lower reproductive rate of spine-bellied snakes could be threatening their population. The scarcity of data on the population status of species hampers informed conservation and management action.

According to a recent report by FAO, about 20 million endangered, threatened and protected marine species are caught as bycatch annually. Bycatch rates are higher in biodiversity-rich tropical countries. Similar to sea snakes, bycatch is a major threat to sea turtles, cetaceans and seabirds and many other species. Since these species are long-lived, grow slowly and take time to reach sexual maturity, their recovery to a stable population is difficult.

Many species of sea snakes, whales and marine turtles use the continental shelf as breeding and foraging grounds. “Gillnets and trawlers can both operate at similar depth at the continental shelf- waters near the coast, where most fishing in India occurs. Although the scale, frequency, intensity and the design of the gear of the trawlers is the cause of concern,” said Mayuresh Gangal, co-founder of Know Your Fish, a sustainable seafood initiative. Gangal was not a part of the study.

“Trawlers target pelagic (surface waters and close to surface) and benthic (ocean floor) zones for fish and shrimp,” said Rao. But trawl bycatch for the species is highest when trawlers shift from demersal (bottom of the sea or lake) to benthic zone, found the study.

“The trawl nets are submerged for about 3-4 hours and dragged on the ocean floor whereas gillnets are stagnant and submerged in shorter periods. Trawlers have small mesh size nets and there is no escape for any animal that is caught and when it comes up, the weight of trawl catch which is about 400-500 kgs, kills both adult and juvenile sea snakes and other bycatch,” said Rao. Gillnets capture more beaked snakes when they come to give birth in shallow waters where gillnets operate. In contrast to trawlers, gill nets catch mostly adults, most of which would survive, he added.

Expansion in fisheries began as self-sufficiency in food production

In India, trawling came in as a plan for achieving self-sufficiency in food production post-independence which caused a paradigm shift in Indian fisheries. As huge economic gains from the export of shrimps became apparent, ideas of self-sufficiency transmuted to that of foreign exchange and trawlers spread throughout the Indian coastline. Technological advancements and vessel capacity assisted the trawlers, which revolutionised the marine fishery industry.

In 2019, the marine production was 3.56 million tonnes with mechanised vessels contributing 83% of the catch. Since the entry of trawlers in the Indian fisheries, the focus has been to promote economic development, generate food for local consumption and export.

Mayuresh Gangal pointed out that, “the early unregulated phase of trawling began with centre and state governments offering subsidies to purchase vessels, gear, engines, fuel, and mechanisation along with financial aids through tax exemptions. Such subsidies continue to drive overexploitation of fishing grounds.”

Developing scientifically and socio-economically just management policies are crucial for sustainable harvests and consequently livelihoods. The blue economy model like the green economy emphasises human wellbeing and social equity while reducing ecological risks. But, large-scale trawling operations have led to a huge rift in marine commons and how they are accessed by coastal communities. It is a classic tragedy of Commons, Gangal said.

“Small-scale fishers are the most impacted ones. Besides catching fish they are involved in a range of activities that are associated with fish catch such as cleaning, gleaning, selling of fish etc. Often these communities do not have rights over the land, have poor living conditions due to inconsistencies in the catch and range of social factors, making them prone to displacement and other vulnerabilities,” Vardhan Patankar, Marine Biologist, Wildlife Conservation Society, India, told Mongabay-India.

A complete ban on trawlers has been advocated by scientists across the globe. In India, while the centre has imposed no bans on trawling, many states have their own spatial and temporal restrictions, Patankar said. The Tamil Nadu Marine Fisheries Regulation Act, 1983, permits mechanised vessels to fish up to 12 nautical miles. “Whereas Kerala observes a 52-day monsoon trawling ban, Maharashtra observes a monsoon fishing ban,” he said.

To manage the size selectivity of trawl nets and to reduce the bycatch level especially to reduce mortality of juveniles of commercially important species, various countries have devised different techniques like turtle exclusion devices (TEDs). But, studies have indicated that such devices are not as effective. “Fishers are aware that some percent of the catch is lost if they use TEDs. Besides, there is a huge demand for bycatch in the poultry industry and local markets. In addition, the implementation of TEDs and bycatch reduction devices requires surveillance, monitoring and evaluation, which is a major challenge considering India’s vast coastline, law and policy framework and several fishing fleets in the water,” Patankar noted.

“It is essential that diversity in seafood consumption is emphasised to reduce pressure on the marine ecosystems. We seem to have lost the understanding of the seasonality of food resources. Traditional fishing communities have immense knowledge of sustainable harvesting practices and seafood diversity,” said Rao. Fishing communities are aware that the oceanic resources are depleting. Their understanding of the ecosystems which have evolved over generations could be the key to marine resource management and implementation of socio-economically just conservation policies, he added.