Six years ago, on a November morning, Sambhar Hazarika witnessed a sight that left him crestfallen. His farmland, located a few kilometres from his home, was plundered – the cowshed he had built was smashed to the ground and his crops devoured by a herd of elephants the previous night.

But this wasn’t an unusual sight. Hazarika, in his 60s, is one of the many farmers in Sauraguri chapori (riverine island in the Brahmaputra river basin), which lies roughly 23 km away from Assam’s Sivasagar city, who’ve suffered the negative consequences of human-elephant conflict for as long as a decade.

“Sometimes, they’d come in large herds of 50 to 60. Sometimes just three or four of them. The elephants have destroyed our homes, farms and cowsheds. I have suffered losses of over Rs. 60,000 overnight,” says Hazarika. “There have been days when I have cried because of the destruction caused by the elephants. I was tired of cleaning their dung.”

Hazarika’s agricultural land, which spreads over two bighas (roughly one acre), is a five-minute ride from the sacred mausoleum Ajan Pir Dargah. Here Hazarika grows a variety of vegetables that he sells in the local market. Rearing cattle and cultivation of rabi crops are the two primary sources of income for farmers here. Paddy cultivation isn’t feasible due to floods.

Buddheswar Das, another farmer in his 60s, whose farmland lies a few steps away from Hazarika’s, recalls an incident that almost took his life. “A few years ago, one elephant came charging at me from under that tree, but one of my cows and her calf were in its way. The elephant trampled both of them to death in front of my eyes,” he says, pointing to the tree.

Hiren Dutta, a farmer and a wildlife conservationist, who lives in the nearby village of Dikhowmukh, says this conflict is because elephants do not have access to adequate food. “Had the sandbars not been taken over by people, it would have made a suitable place for growing food for the elephants. The forest department needs to do something about that,” he adds.

The last four years, however, have been different. There have been no elephant intrusions; crops are flourishing. The reason: lemon trees that were grown to mimic a fence as they matured to form biofences.

The plantation of lemon trees around the farmlands, as a community-based solution, was proposed in 2019 when researchers associated with the Guwahati-based NGO Aaranyak came across the Sauraguri farers while mapping the distribution pattern and intensity of human-elephant conflicts in the Brahmaputra river basin. The biofencing idea was pitched on the basis of the organisation’s success in erecting similar biofences in villages around Manas National Park in western Assam.

Project leader Bibhuti Lahkar said that 500 lemon saplings were supplied to five farmers, including Hazarika and Das, in Sauraguri. The saplings were planted in three rows, in a zigzag pattern, not to leave any space between them, such that they are tightly intertwined when they grow bigger.

In four years, Hazarika’s lemon trees have grown into powerful barriers against elephants. The thorns of these lemon trees and the smell of lemons repel elephants and the produce of lemons acts as a source of income for the farmers. Hazarika now collects up to 900-1000 lemons per week and sells them to buyers who resell them in the nearby villages.

“In the off-season, I sell lemons for Rs. five per piece, and during peak season, they sell for Rs. two to three per piece,” says Hazarika. “I have taken good care of them throughout these years. The lemon trees have saved us. Elephants don’t bother us now,” says Hazarika. The four other farmers – Nitul, Jibon, Kamal and Buddheswar Das – agree with Hazarika.

Although the farmers had accepted the lemon saplings, they were not convinced the idea would work. Hiren, one of the 14 volunteers trained by Aaranyak, has been pivotal in making this project a success. He educated and motivated the reluctant farmers to give the biofence idea a chance.

“We were skeptical at first. But Hiren da explained the importance of lemon fencing around our farmland. I am happy that we listened to his advice and took care of the saplings. We have been earning well,” said Nitul, the youngest of the five farmers.

“Lemon trees as elephant barriers can also be an example for other regions facing human-elephant conflict. Biofencing is an alternative to solar fencing. It is safe for both humans and animals,” says Hiren Dutta.

Conservation strategies in the riverine areas of the Brahmaputra in Assam, where as many as 150 to 200 elephants move, are still quite poor due to a lack of systematic studies, adds Lahkar. Elephants living in the Brahmaputra river basin usually migrate from the north bank of the river to the Majuli district. They take the same route back.

This herd of elephants walks along the north bank of the Brahmaputra, crosses the river and enters the Dehingmukh Reserve Forest, located on the river banks. Due to rampant destruction of forests, the forest cannot support this large elephant herd.

So they move on from Dehingmukh to Panidihing Bird Sanctuary, which also lacks adequate habitat for this elephant population and they then move further towards Sivasagar (Disangmukh, Dikhowmukh) and Jorhat district (Jhanjimukh, Nimati, Molai forest) and finally to Majuli and walk the same route back, adds Lahkar.

During this migration period, the elephants damage crops and agricultural lands, leading to conflicts with villagers inhabiting those areas. These villagers retaliate by harming the elephants.

Biofencing has been popular in this region for the past few years. A study by Dolly Kikon at the University of Melbourne and Sanjay Barbora at Tata Institute of Social Sciences, India, talks about how lemon farming, promoted as rehabilitation programmes around Manas National Park (an area within the Bodoland Territorial Autonomous Districts in western Assam), has generated income for villages that were deeply affected by ethnic conflict in the 1990s.

Based on fieldwork between 2016 and 2019, the study explores how communities around Manas are involved in planting lemons to earn livelihood and building fences with lemon plants to keep away elephants and find ways to coexist. “Lemons are emblematic of enhancing livelihood, opportunities and protection for local farmers and villagers who live here.”

“Planting lemon trees serves a dual purpose of finding a viable economic solution and addressing new ways of engaging with the human-animal relationship in post-conflict societies,” the article states. 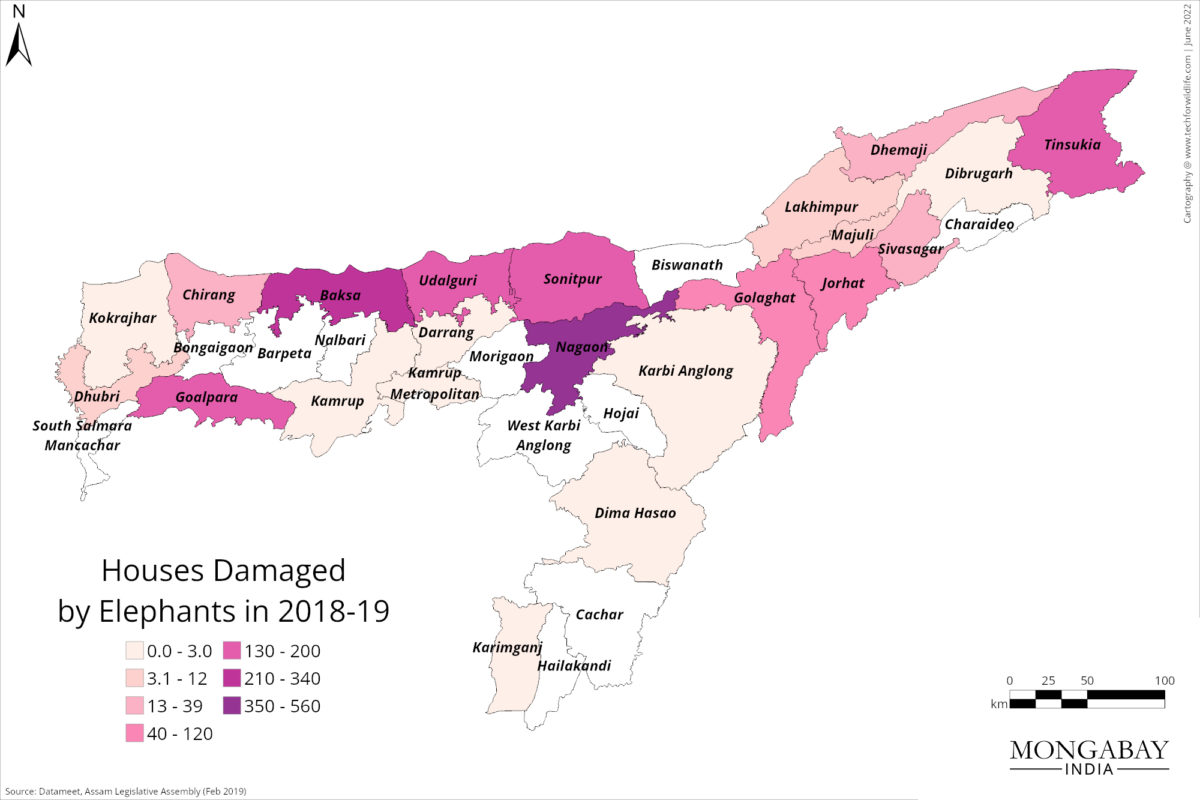 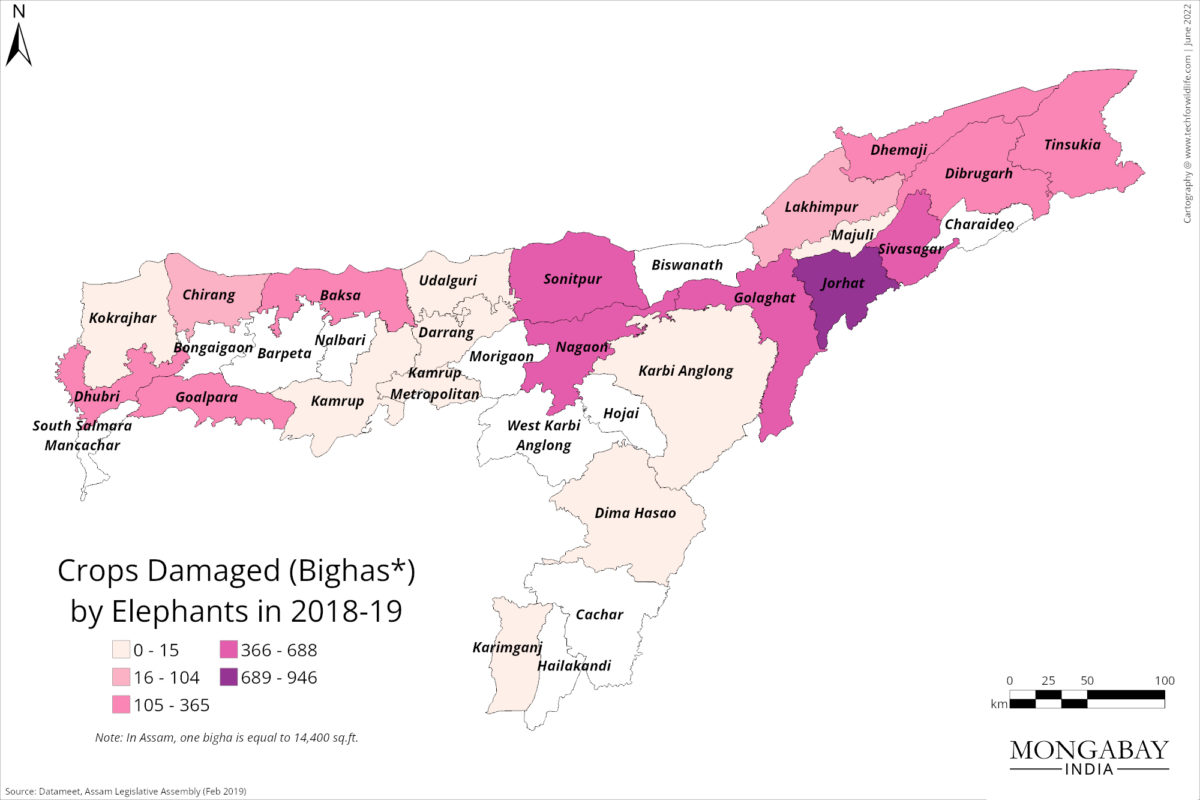 Apart from Assam, biofences have been put up in other parts of India such as Uttarakhand, Tamil Nadu, Kerala, and West Bengal.

In 2019, the Uttarakhand government decided to carry out biofencing by growing plants such as lemongrass, agave, and certain species of chilly, to prevent wild animals like leopards, bears, elephants and wild boars from entering residential areas and to protect agricultural crops and livestock. Elephants and wild boars were reported to have caused maximum loss to human life, livestock and crops in the forest areas of Haridwar.

In 2020, the forest department of Coimbatore in Tamil Nadu planted a barricade made of cactus variety Cylindropuntia ramosissima, locally known as suramul, along the forest boundary near Anuvavi Subramaniaswamy Temple, to keep wild elephants away. It was a success.

According to a report by the Ministry of Environment, Forest and Climate Change, beehive fencing in Kerala’s Amba village were successful in driving away elephants. Chilli, known to have an irritating effect on the olfactory nerves of elephants, is also popular in Kerala and West Bengal. Chilli ropes were more effective against elephant family groups than bulls, and in drier regions as compared to high rainfall regions. It was effective in Karnataka.

Conservation researcher Varun Goswami says biofencing as a solution to minimise human-wildlife conflicts can be sustainable if it comes up in the right place: the biological barrier does not impede vital elephant movement between fragments of their habitat.

“I have always maintained that fences, when required, should be designed to ‘fence elephants out’ of human spaces rather than ‘fencing them in(to)’ forests. In that sense, planting lemon trees around farmlands could be a good long-term strategy if they do not block elephant movement at a broader scale, and neighbouring elephant habitats are secured and restored where needed,” Goswami told Mongabay-India.

If these conditions are met, biofences – which may require less hands-on effort to maintain than other fences – have the potential to provide benefits to people while reducing conflict risk.

Goswami adds that the key to conflict management lies in careful scientific planning and this needs to be done by not only recognising the nuances of the local context but also what the landscape would look like to an elephant in search of resources, refuge and mates.

Aritra Kshettry, director of the Coexistence Consortium adds that the biofence needs to be locally suitable to the climate, ecology and soil. The species used as a biofence should be fairly fast-growing so that local communities are interested in adopting the use of these fences.

“For example, bee fences may work in dry areas but are not useful in high rainfall areas because the bees don’t survive. Thorny bamboo fences may be suitable where they are found naturally, in other habitats, these species could become invasive and cause habitat destruction. Lemon and agave have also been used in some areas,” Kshettry told Mongabay-India.

However, there has not been any systematic evaluation of the efficacy of these biofences, except for bee-fences.  “If the fences can keep elephants at bay, provide economic benefit to local communities, and do not harm the local ecology, then these fences could be sustainable in the long-term,” he said.

The overlap of human and elephant ranges will lead to some negative impacts and the impacts are greater at forest edges and in fragmented landscapes. “In such cases a zonation approach with elephant conservation zones, coexistence zones and elephant removal zones could work.”

“Once the coexistence zones have been identified, the challenges of property loss may be minimised by the effective use of fences, deterrents, non-palatable crops, and the adoption of safety practices among the communities sharing space with elephants,” added Kshettry.

Maps by Technology for Wildlife.

Banner image: A herd of elephants seen in a paddy field near Pani Dehing Wildlife Sanctuary. Photo by Kasturi Das/Mongabay.