Karnataka is on a port-development spree. The 320-kilometre coastline, spread across three districts – Uttara Kannada, Udupi, and Dakshin Kannada – is dotted with 12 minor ports, and one major port, in different stages of development. A common complaint across this port development activity is that it ignores concerns raised by the coastal communities that live in the vicinity of the action – concerns about the loss of coastal commons, the loss of biodiversity and a loss of livelihood.

While a major port comes under the aegis of the central government, the minor ports are controlled by state governments. A major port has deeper drafts allowing large, capesize vessels, higher investments and higher tariffs. A minor port, in comparison, has lower tariffs.

With the impetus of Sagarmala, a nationwide port-led development initiative of the central government, Karnataka is keen to go all-in to create coastal infrastructure in the form of ports, railways and highways that connect the coast to the hinterland. Kapil Mohan, additional chief secretary of Karnataka Infrastructure Development, Ports and Inland Waterways Department and the Chief Executive Officer (CEO) of Karnataka Maritime Board estimates that “the planned infrastructure development is expected to bring in approximately Rs. 15,000 crore (Rs. 150 billion) of economic value addition.”

This growth is led by both Sagarmala, which is funded largely by the central government, and the state government which is also pumping in and encouraging private investments largely through a public-private partnership model. In a speech at a business and maritime conclave organised by Karnataka Maritime Board, Federation of Karnataka’s Chamber of Commerce, and State Bank of India on May 12, Karnataka’s chief minister Basavaraj Bommai said that their government has proposed projects of over Rs 8,000 crore (Rs. 80 billion) to be developed under Sagarmala. Both the central and state government are led by the Bharatiya Janata Party (BJP). In November this year, the state is organising a global investors’ summit to attract international investments.

Waterways are one of the cheapest modes of freight transport. The rate of freight transport via road is almost double in comparison. At the moment, about 87 percent of Indian freight either uses rail or road for transportation of cargo, and waterborne transport accounts for less than six percent. Industry insiders say that better connectivity between ports through inland and coastal waterways is economically efficient. They also say that port development would connect the hinterland industries with the ports via a better road and railway network, leading to the idea of projected growth; infrastructure creating its own demand.

For example, Karnataka’s new industrial policy of 2020-2025 focuses on the growth of the cement and steel sectors, and increasing the export of sugar, by building better infrastructure and logistics. The investor pitch document prepared by Karnataka Maritime Board says that the state has a “well-developed industrial hinterland including 40 MTPA (Million Tonnes Per Annum) of cement capacity, 25 MTPA of iron & steel capacity, 10 GW (gigawatts) of installed thermal power plant.”

The investor document is seeking investments in captive ports as well. A captive port is constructed and developed by a private sector company for a specific purpose. For instance, the port at Manki, in Honnavar taluk of Uttara Kannada, is to be developed as a captive port by Renuka Sugars. The port at Pavinkurve, another village in Honnavar, is slated to be constructed by the JSW (Jindal South West) Group with an investment of Rs. 2,000 crore (Rs. 20 billion) to carry 15 MTPA cargo to their own steel plant in Vijayanagar which is also being expanded from 12 MT to 18 MT. The port at Kasarkod-Tonka, a third location within the Honnavar taluk of Uttara Kannada, will have a capacity of 5 MTPA once completed.

Port officials also say that amid port expansion efforts, the port at Karwar in Uttara Kannada is projected to have a capacity of 4.5 MTPA from the current 3 MTPA capacity. The port at Old Mangalore is slated to expand from 1 MTPA to 2 MTPA.

What do these ports import and export, and do we really have the need for so many ports? According to data obtained through the Right to Information Act, apart from the port at Karwar, which imports rock phosphate, bitumen, HSD (High Speed Diesel), palm oil, industrial salt and caustic soda solution, and exports molasses and caustic soda, no other minor port has shown an increase in its exports and imports in the last five years.

In fact, the ports at Tadadi, Honnavar, Manki, Pavinkurve, Bhatkal and Padubidri show no history of cargo handling, indicating that they are not commercial ports, yet. The ports at Belekeri, Kundapura and Hangarkatta show no cargo handling data after 2018. And the ports at Malpe and Old Mangalore show a reduction in business in the last five years.

Karnataka’s new industrial policy also aims to make land acquisition easier, removing restrictions on land conversion and exempting industries from the Karnataka Land Reforms Act, 1961 through a series of amendments. It is focused on export-oriented, production-driven growth banking on high investments from private vendors, both national and international. Ports and connecting infrastructure will allow it to export and import from within the state, and not depend on ports outside the state.

In August 2013, the government of Karnataka notified new port limits for all minor ports of Karnataka, indicating the extent of jurisdiction of the state ports department.

The Karnataka Minor Ports Development Policy 2014 aspires to develop commercial ports, increase their capacity for handling more cargo, decongest highway traffic by providing facilities for coastal shipping of passengers and cargo traffic, build more captive ports through a public-private partnership (PPP) model, and create facilities to handle at least 5-10 percent of the country’s cargo. It also allows the state government to invest up to 11 percent in all PPP port projects and requires the state government to take up the mantle of acquiring land even for private port projects. In addition, it aims to convert all ports from fair-weather (seasonal) to all-weather ports.

In 2015, the state passed the Karnataka Maritime Board Act, which allowed the formation of the Karnataka Maritime Board. Once established in 2018, the Board became the nodal agency to coordinate and implement the port development policy, a job that initially belonged to the Ports and Inland Water Transport Department. The board, according to the policy, allowed bidding for private investments, a function that is not possible for the state department.

So far, out of the 12 minor ports and one major port, one is being developed under a public-private partnership between the state government and Honnavar Port Private Limited, two are slated to be developed as private captive ports by the JSW Group and Renuka Sugars, and two were coming up under the Sagarmala scheme, at Karwar and Tadadi. Owing to resistance by coastal communities, the port at Karwar has been stalled indefinitely and the port at Tadadi has been denotified. The rest are still in various stages of being finalised or seeking investments. 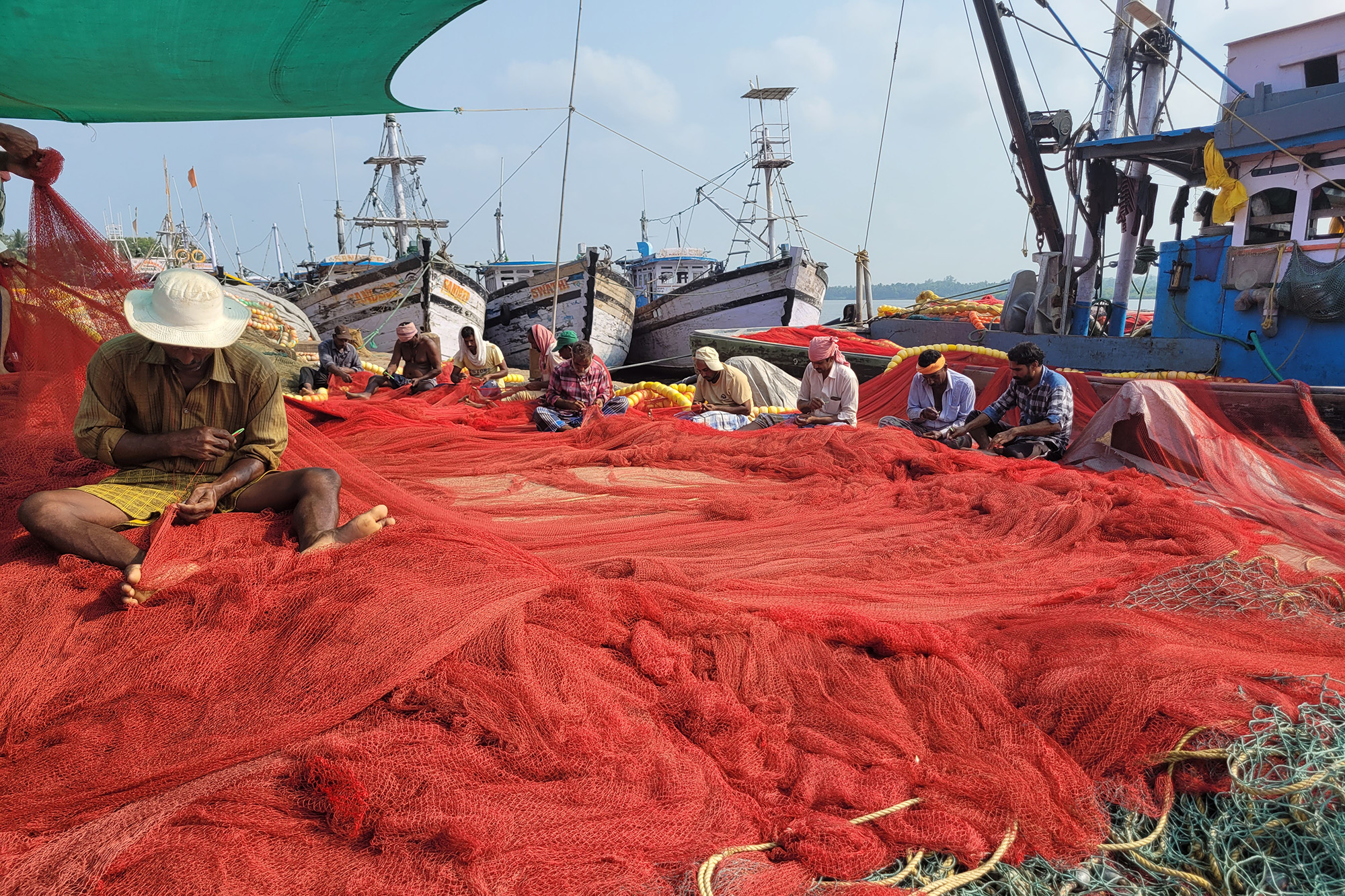 Where’s the place for people and ecology?

Coastal Karnataka has a fisher population of 157,989 spread across 162 fishing villages, from Majali in the north to Talapady in the south. It has nine fishing harbours and 115 fish landing centres. The region has a well-developed fisheries sector, and the ecology and livelihoods are tied deeply to the sea.

Does the port-led development model work in sync with the communities on the ground? An RTI response to a question regarding the biggest hurdle the ministry is facing in port expansion efforts was received thus: “environmental issue and rail road connectivity.”

A people’s tribunal on The Blue Economy organised on December 15, 2020, by the National Fishworkers Forum and SNEHA, a non-profit based in Tamil Nadu, struck down the port-led model calling it a violation of human rights. They stated that port constructions have led to a loss of coastal commons used by fishers for parking boats and drying fish. It has led to a loss of biodiversity on which fishers depend for their livelihood. According to them, port construction has led to a direct loss of livelihood. Independent fishers are losing their dignity of work, turning into daily wage contract labourers.

Three port projects, at Kasarkod-Tonka in Honnavar [Honnavar Barge/Vessel Loading Facility], Karwar [second-stage development of Karwar port] and Tadadi [development of sea-port at Tadadi], where construction began recently, have already run into trouble because of resistance from coastal communities living in the vicinity of the proposed projects. Their reasons for protests are similar — loss of livelihood, and damage to biodiversity. 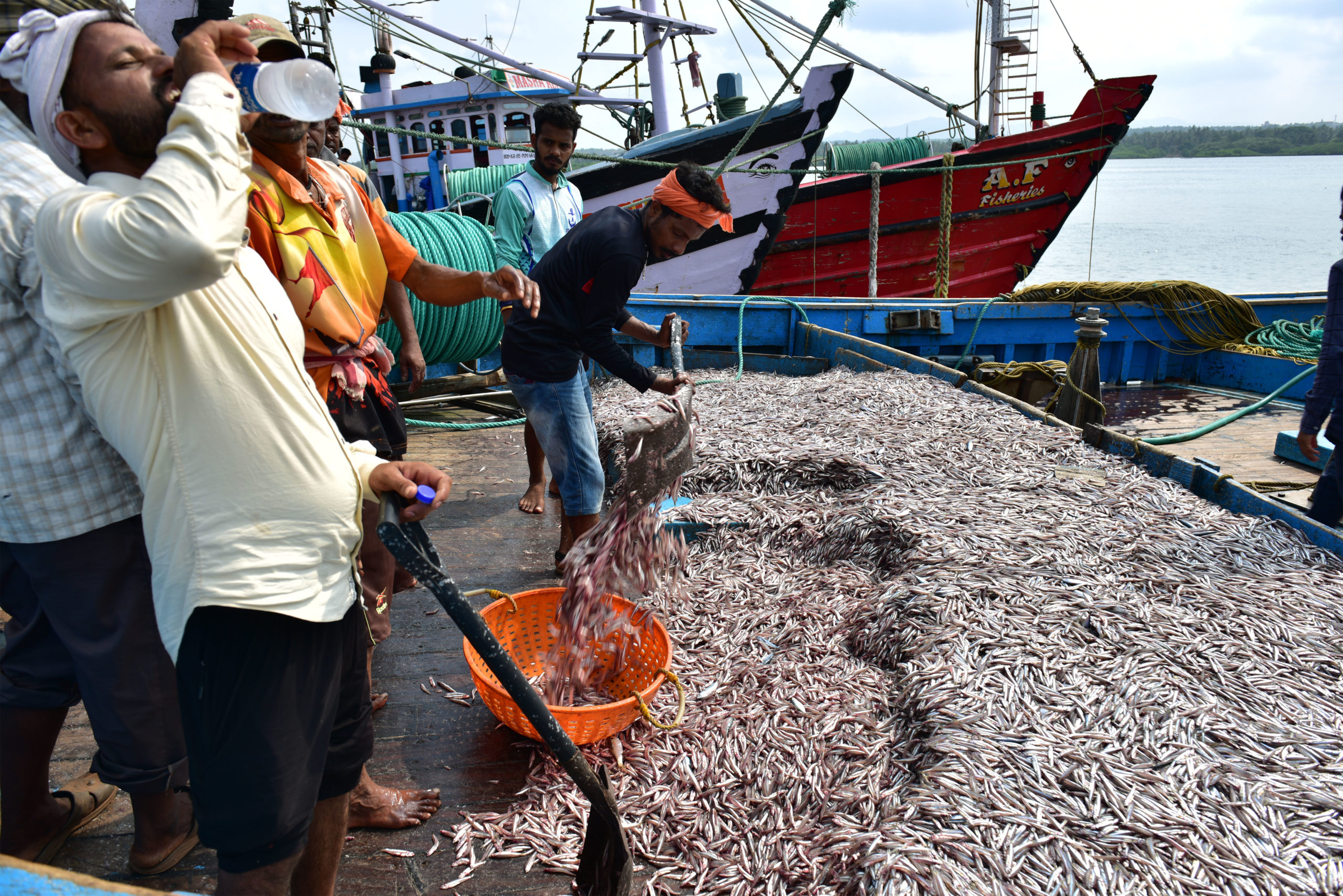 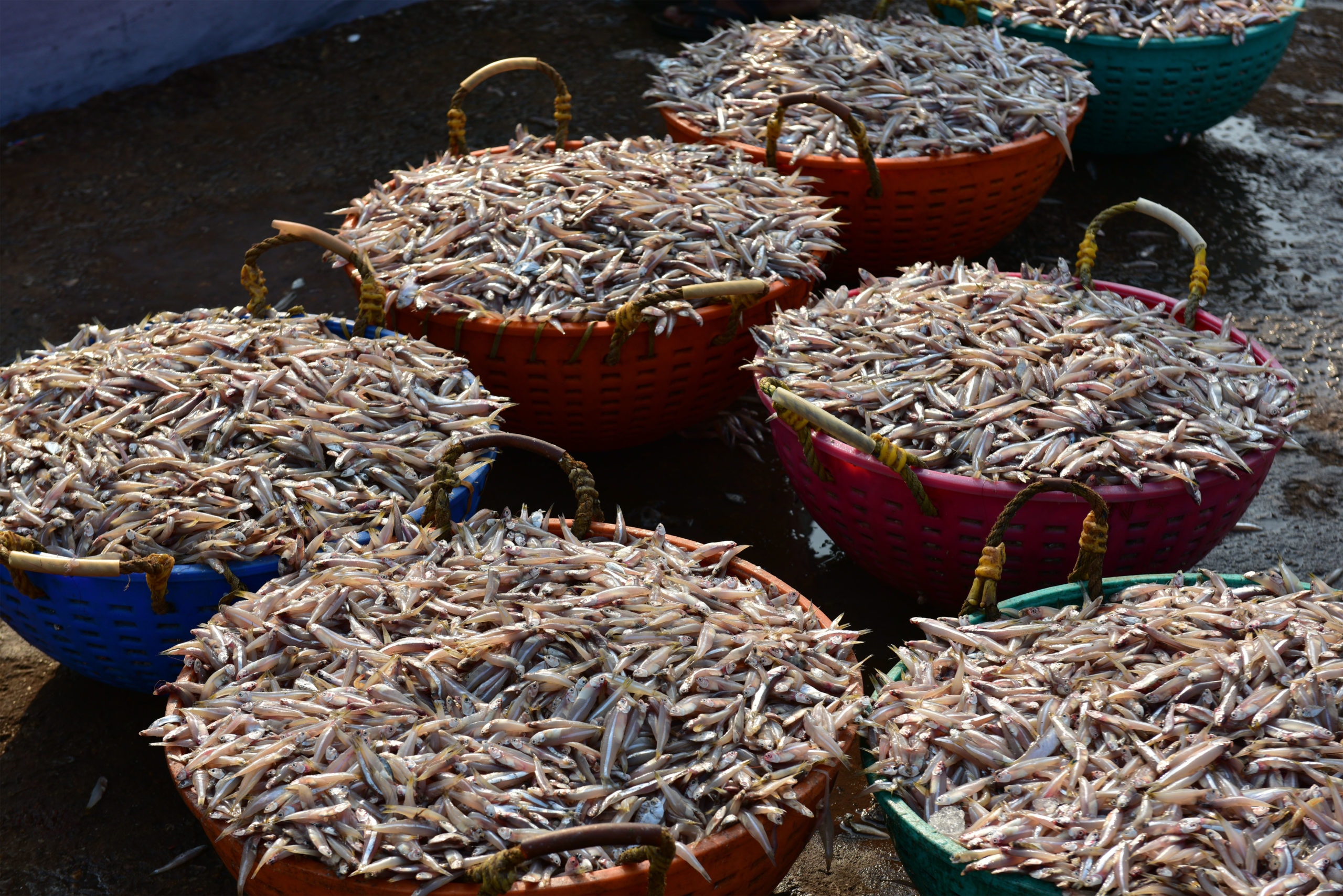 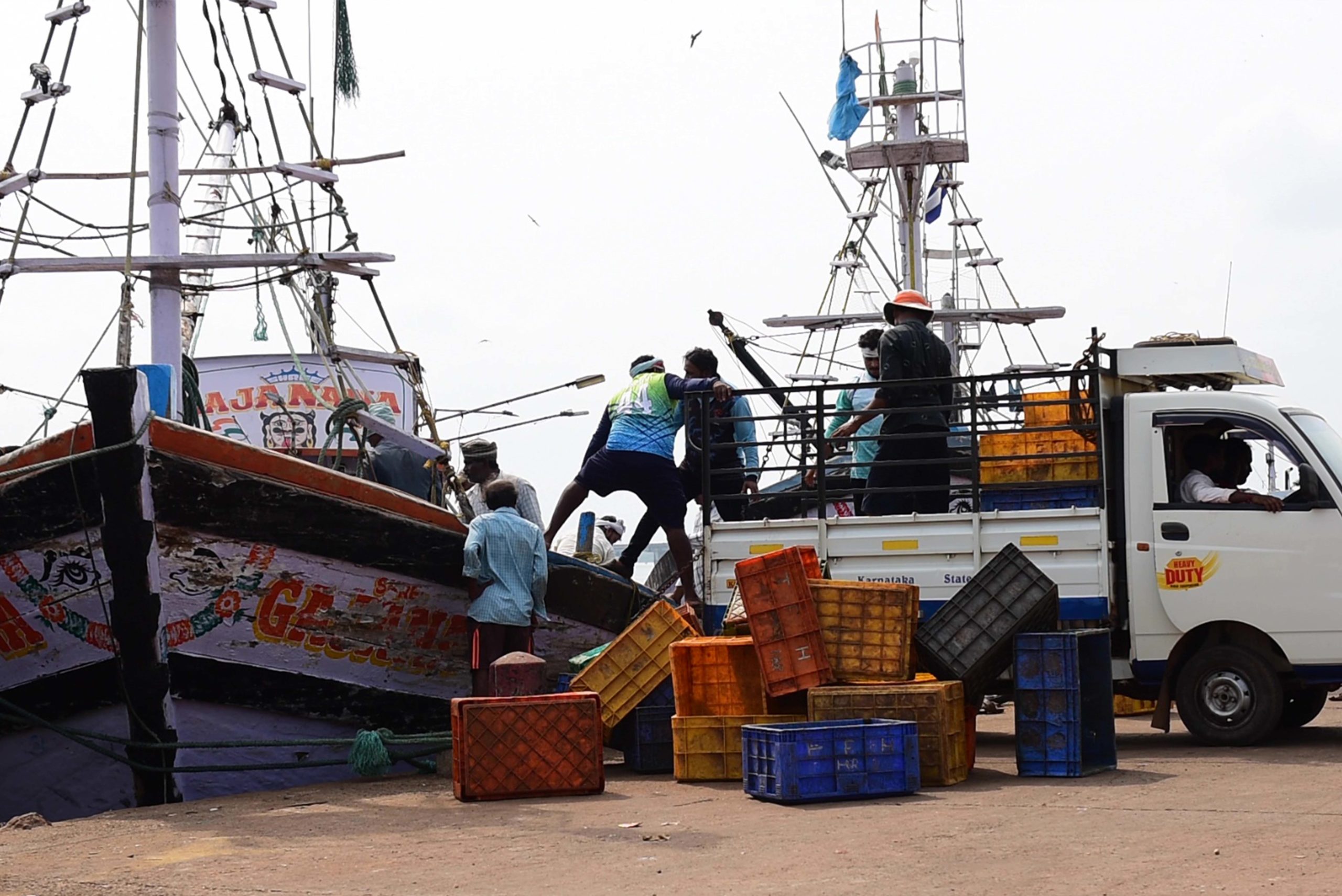 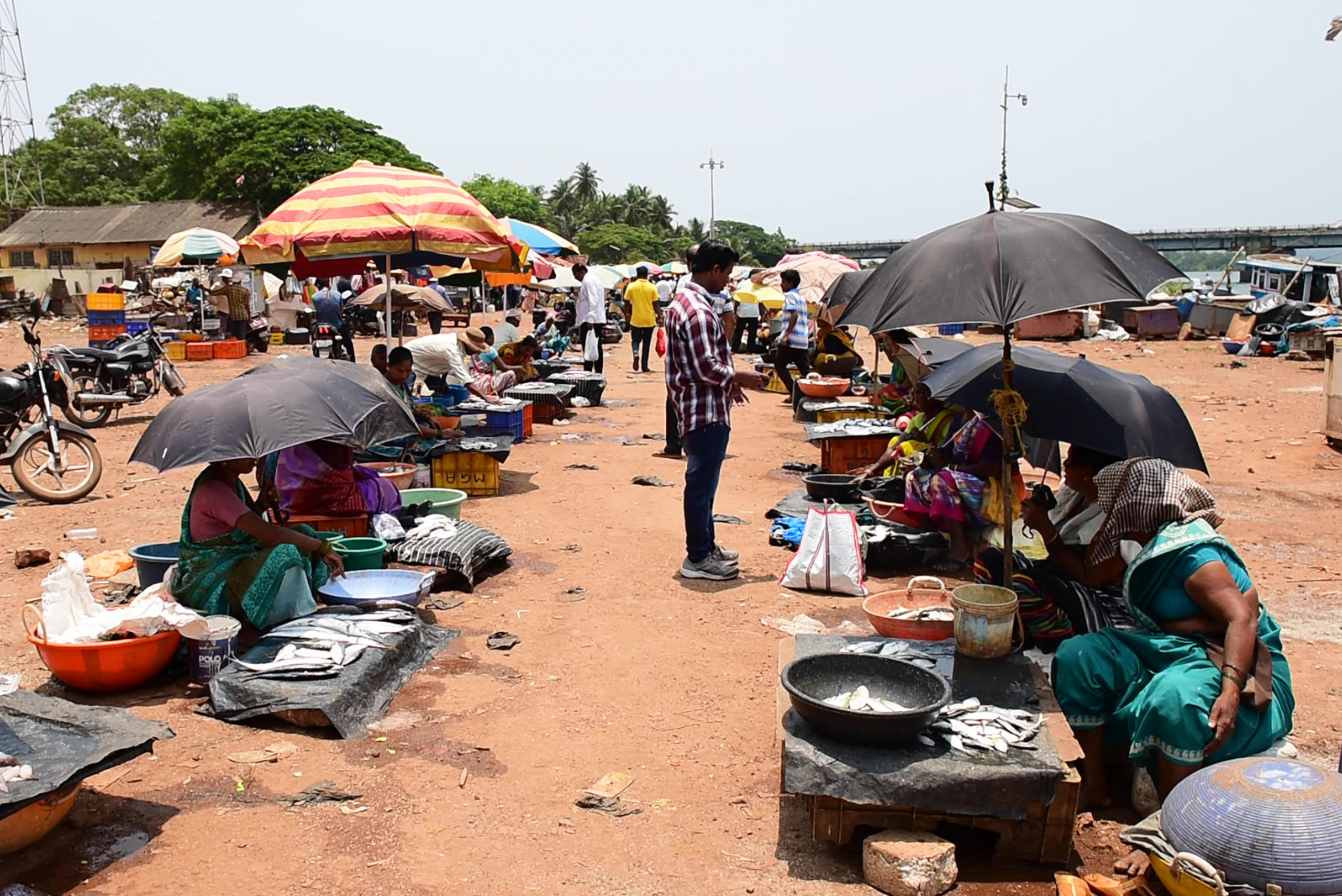 For instance, the port at Karwar, in Uttara Kannada district, which is meant to undergo an expansion under Sagarmala, was ordered a stay by the National Green Tribunal on May 19 after relentless protests. The reason for the stay was that the “project proponent had concealed the involvement of forest land by adding an additional land and obtained environmental clearance which came to light when the application was made on March 14, 2022, for the forest clearance.”

Approximately 62 kilometres south of Karwar lies Tadadi, a coastal village next to the only free-flowing river of the state, the Agashini. The port at Tadadi had been in the pipeline for construction since 2010 and had a number of private investments eyeing it. The proposed site is an estuary where Agashini meets the sea. It is rich in biodiversity, known for its mangrove forests and a unique variety of edible bivalve molluscs, that supports the livelihood of over 2,000 fishers, and provides nutritional security to the entire population of Karnataka’s coastline as well as the neighbouring states.

In 2011, the Centre for Ecological Sciences published a paper that did a valuation of bivalves in the Agashini estuary. The paper estimated that the bivalve-based economy has a turnover of Rs 57.8 million (Rs 5.78 crore) per year. “Our government needs to do serious economic valuations of our rich biodiversity, maybe then they will appreciate the importance of the ecosystem,” said T.V. Ramachandra, a scientist at the Centre for Ecological Sciences, IISc (Indian Institute of Science) in Bangalore), and co-author of the paper.

When Karnataka State Small Industries Development Corporation (KSSIDC) created a special purpose vehicle to start the work on 1,420 acres of land, at Tadadi, protests erupted. In May 2020, on grounds of not obtaining the appropriate forest clearance, the Union government’s Ministry of Environment, Forests and Climate Change decided to delist the port. It is now being developed as an “ecotourism hub”.

Queries sent to the Karnataka government regarding the development of ports and their impact were unanswered at the time of publishing.

In Honnavar, a port is under construction on a coastal sand spit, at the mouth of the Sharavathi river in the village of Kasarkod Tonka. The port is being developed in a public-private partnership model at a budget of Rs. 600 crore (Rs. 6 billion). Kasarkod Tonka is a turtle nesting site, and the land is also used by over 2,000 fisherwomen for fish drying. A four-kilometre-long approach road is under construction, and fishers are protesting.

Preeti Ganesh Tandel, a fisherwoman based in Kasarkod, said, “We are fighting for our rights. We want to exercise our rights. We want our land, our business, and our people. We will lead our lives by doing the fish business. We are happy with this kind of life. There are no problems that we ever faced. It’s the company that is creating problems for us.”

In part 2 of this series, find out how a road connecting the ongoing Honnavar port project to the highway is affecting fisherwomen. The Honnavar coast including the port site is also a nesting site for olive ridley turtles. Part 3 documents the biodiversity at stake due to the port-based development at the mouth of the Sharavathi river.

Banner image: Fisherwomen working at a fish drying site in Kasarkod, Karnataka, with the under-construction port visible in the background. Photo by Hagen Desa/Mongabay.