All eyes on the next chapter: India prepares to host cheetahs after 70 years

by Manish Chandra Mishra on 16 September 2022

On September 17, India will wake up to welcome African cheetahs flying 11 hours non-stop, from Namibia, in a customised aircraft. A forest patch in central India is at the heart of action in preparation for the return of the fastest land mammal to the South Asian nation.

The air around Sesaipura forest guest house near Kuno National Park (KNP) in Madhya Pradesh state in central India hangs heavy with excitement and nerves. The guest house is located near the bank of the Kuno river which lends the protected area its name.

A number of visitors are here currently – forest officials from the state capital Bhopal and conservation experts from Namibia, a country in southern Africa. They have gathered to execute the introduction of cheetahs in India, 70 years after they were declared extinct in the country. The cheetahs to be introduced in India are not the Asiatic subspecies (Acinonyx jubatus venaticus) that went extinct; the African subspecies (Acinonyx jubatus jubatus) will roam India’s open forests.

At the guest house are Barthélémy Balli and Eli Walker of the Cheetah Conservation Fund (CCF), an international non-profit organisation dedicated to saving the cheetah in the wild. They arrived in Kuno in July after the two countries’ governments signed a memorandum of understanding (MoU) on wildlife conservation and sustainable biodiversity utilisation in that month. The two experts will be located in Kuno for the next two to three months to ensure the spotted cats adapt well to the new environment and will look after their health needs.

Discussions to bring the cheetah back to India were initiated in 2009 by the Wildlife Trust of India. The introduction is parked under the Action Plan for Introduction of Cheetah in India. Over five years, more than 50 cheetahs from South Africa and Namibia, will be introduced in various Indian national parks, including Kuno. As much as Rs. 38.70 crores under the ongoing centrally-sponsored scheme of Project Tiger has been allocated to the cheetah introduction project for the years 2021-22 to 2025-26. The deal with South Africa is yet to be inked. 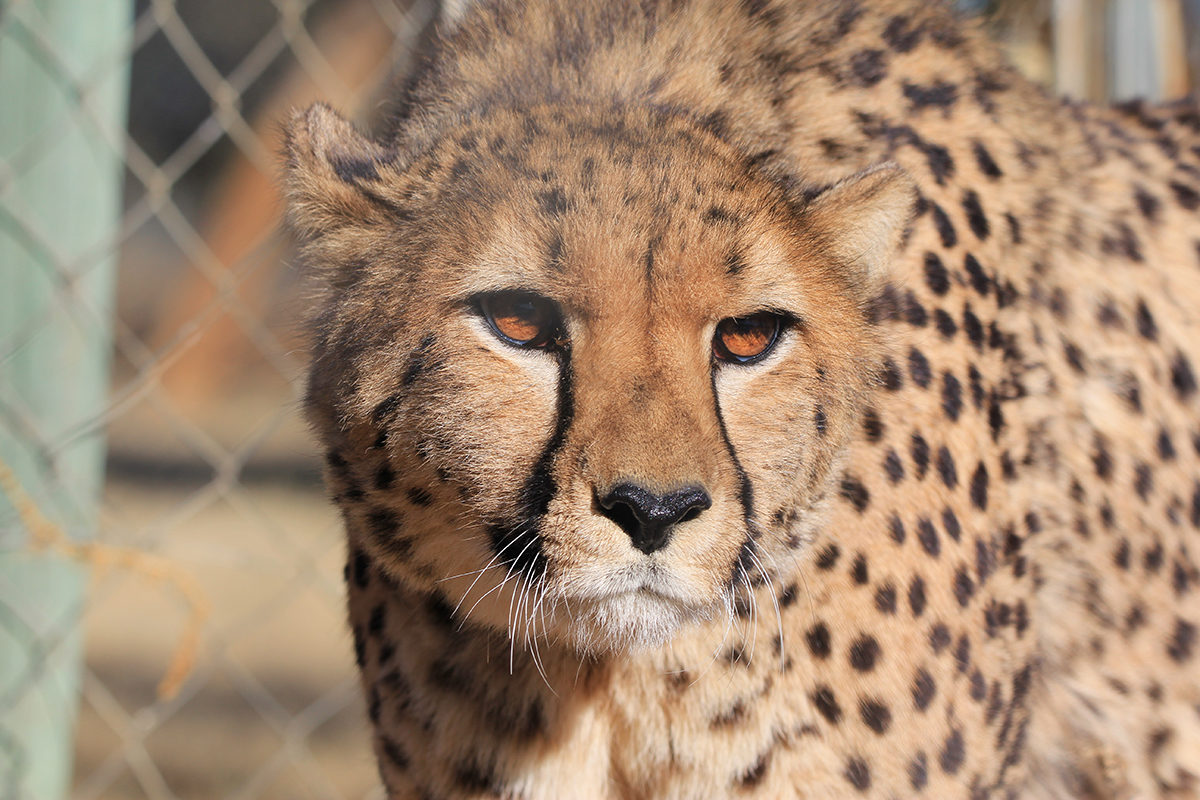 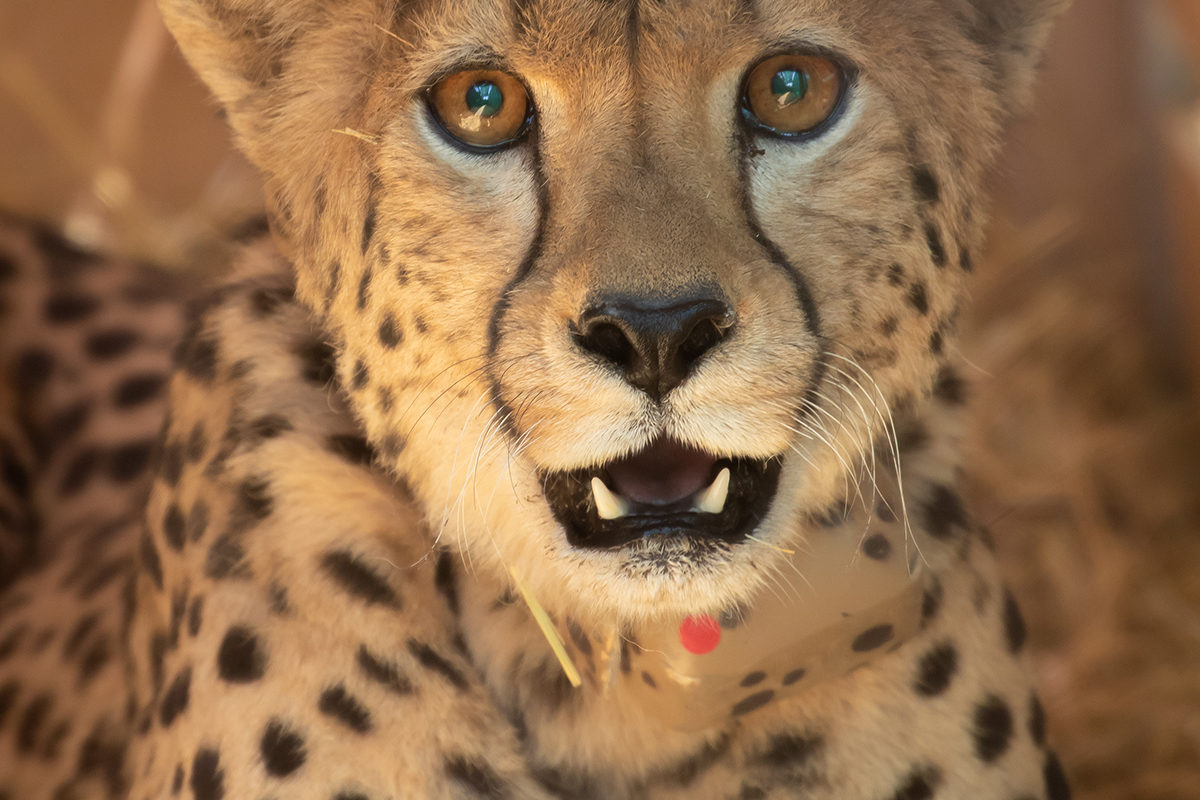 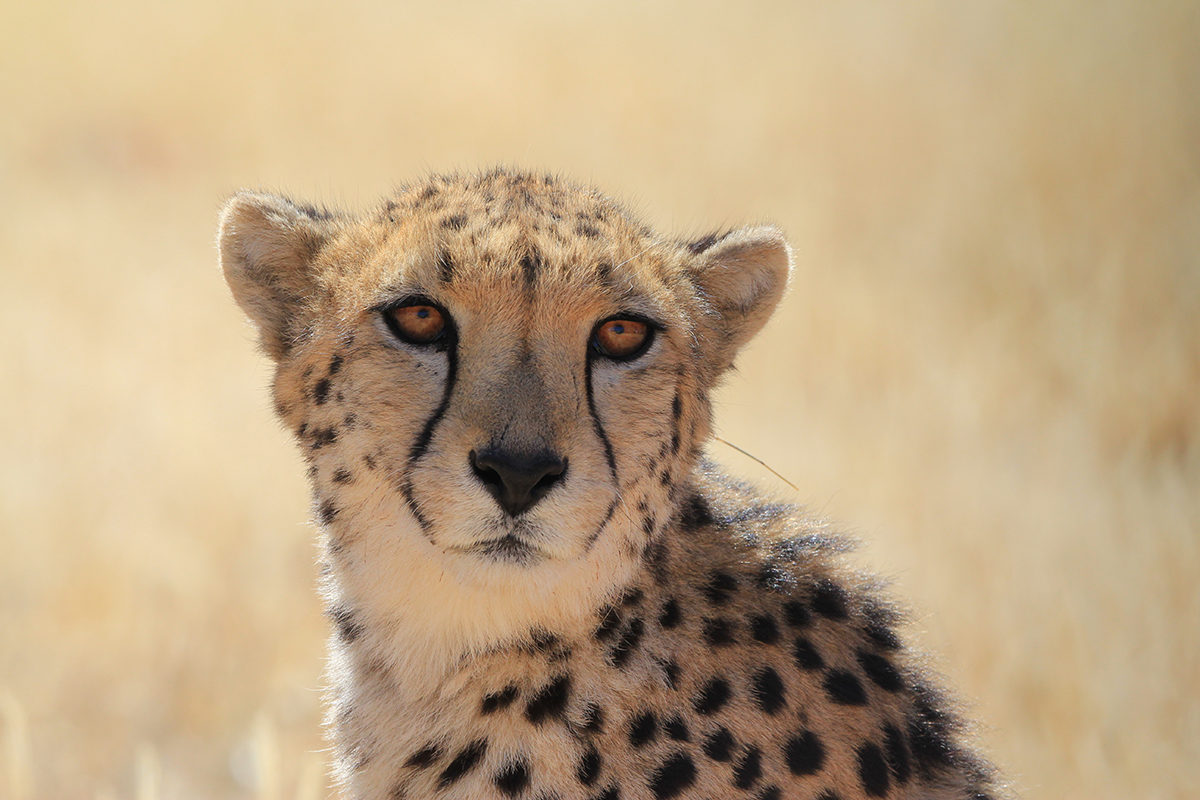 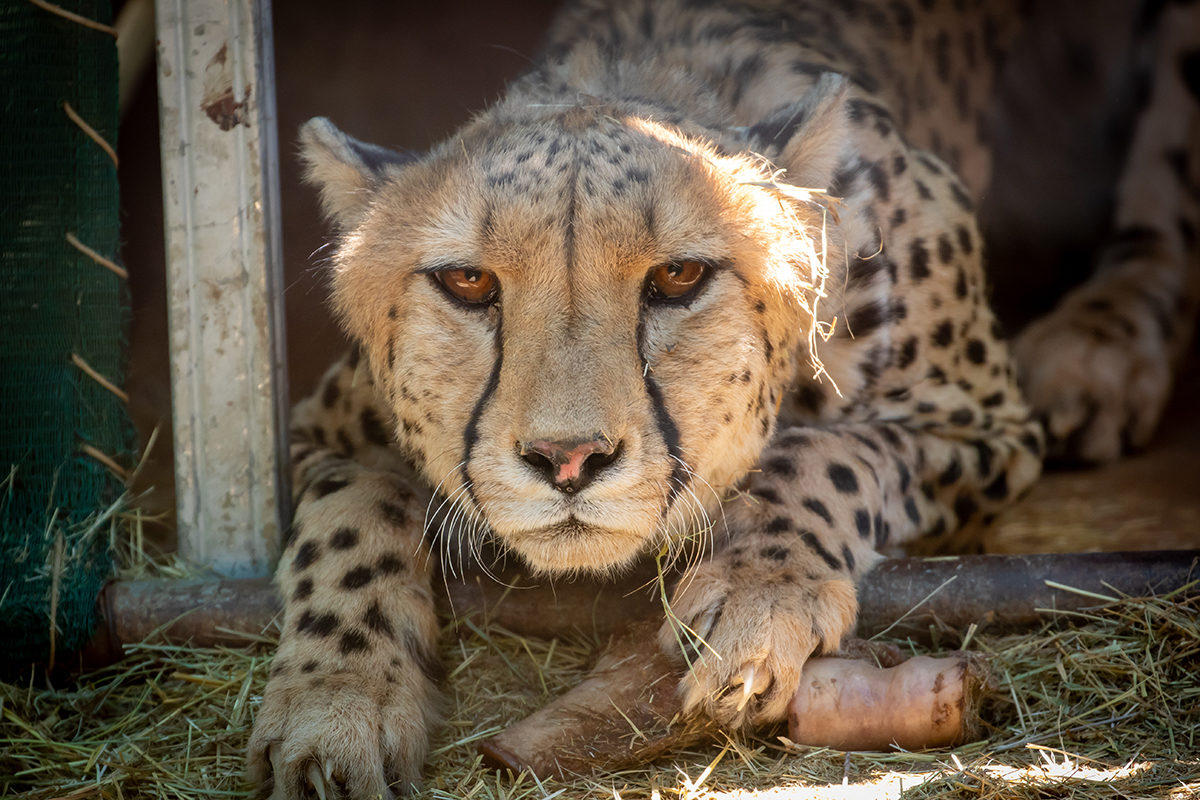 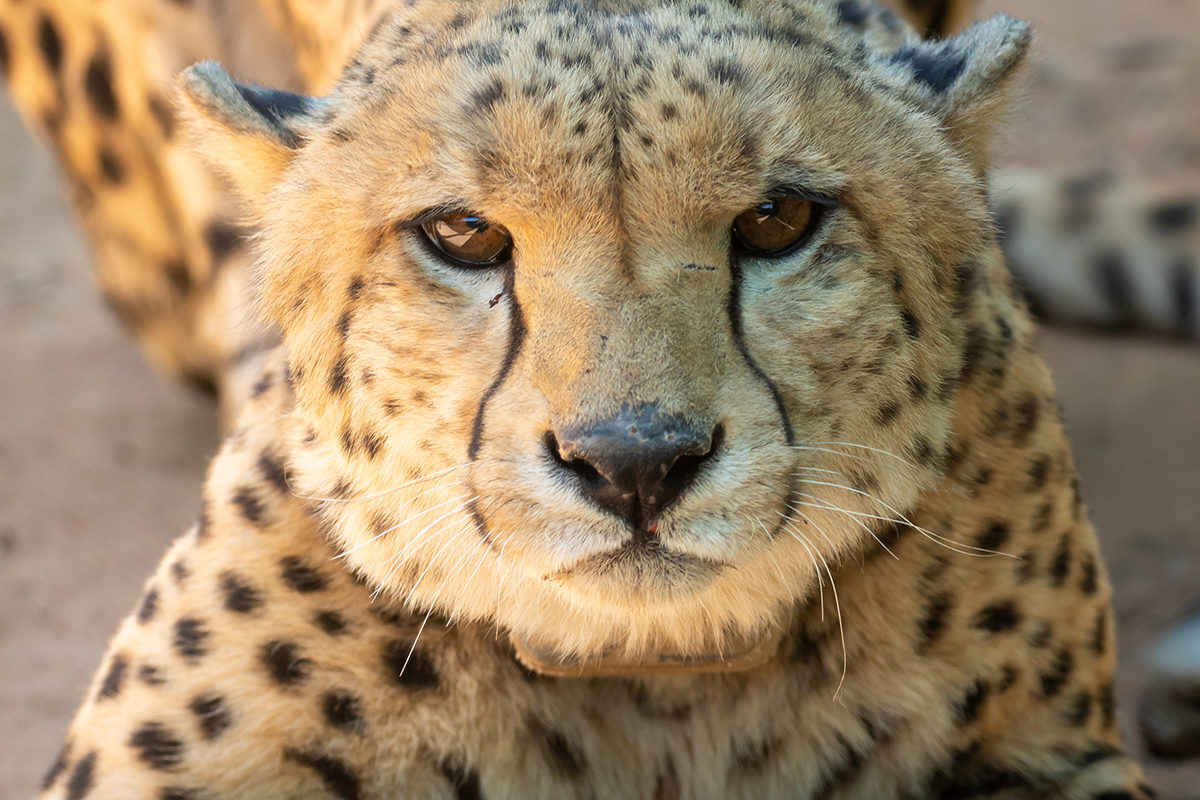 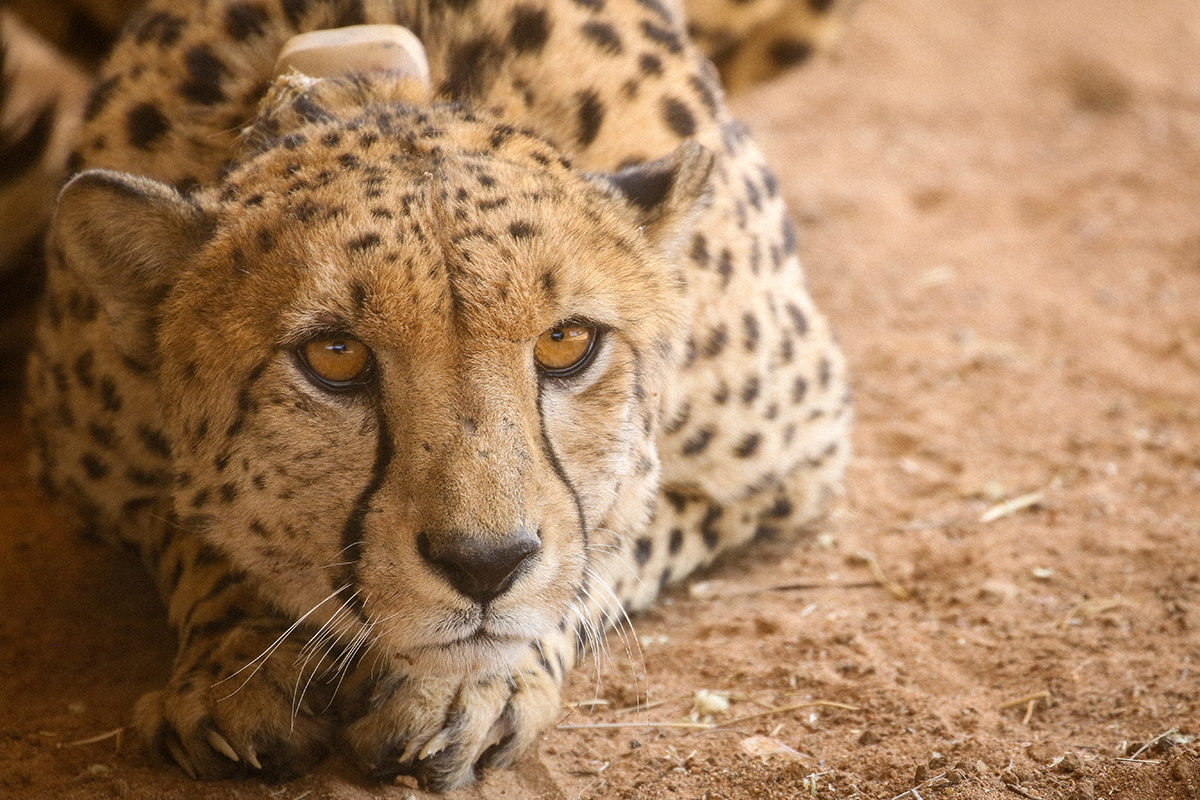 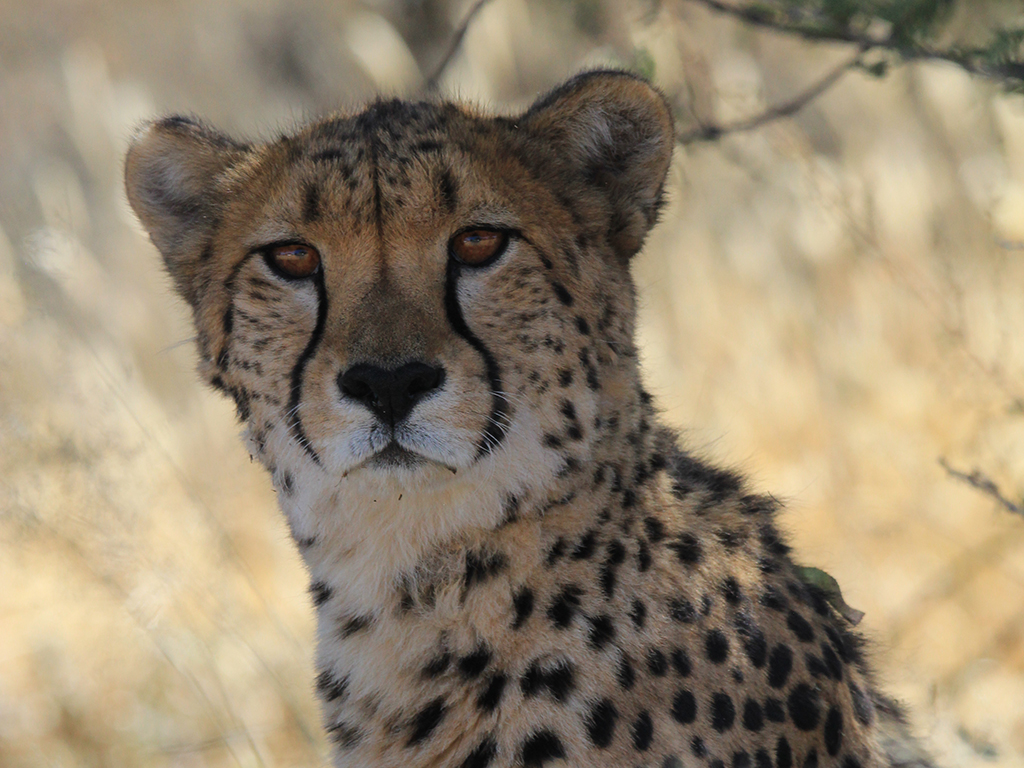 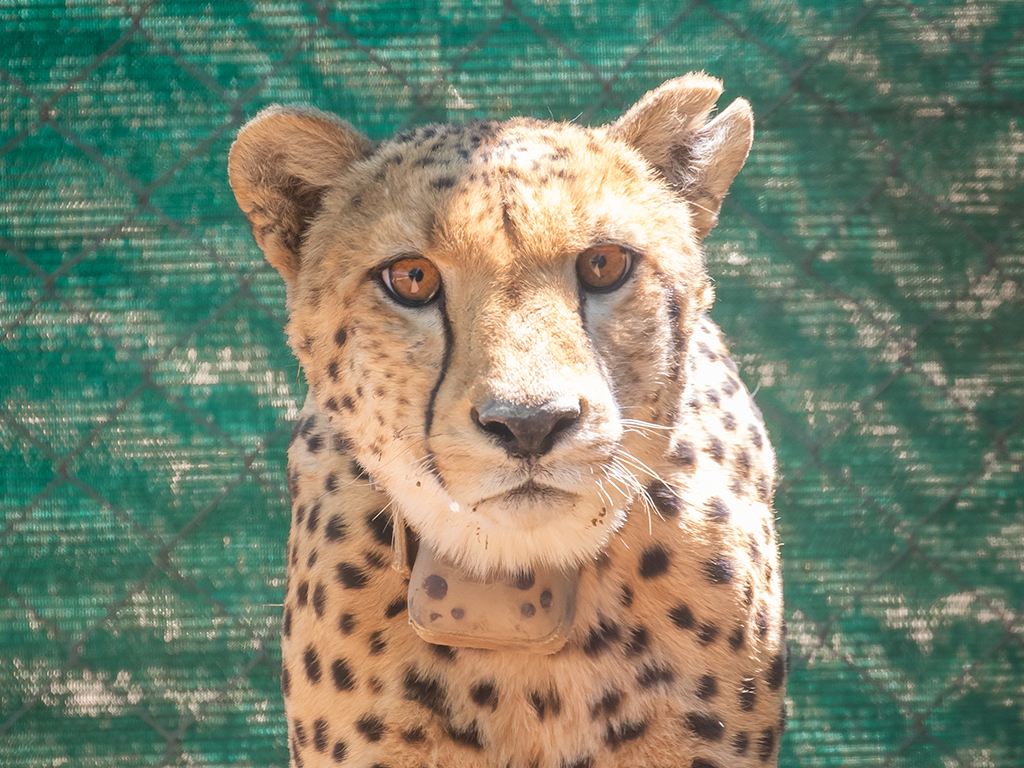 There are eight vaccinated, radio-collared cheetahs – three males and five females – in Namibia’s first batch, arriving on September 17. All the cheetahs fall in the 2-5 year age bracket, making them fit to reproduce in India. They will undertake an 11-hour journey from Windhoek in Namibia to Gwalior in India and will be transported to Kuno by helicopter.

Ahead of the arrival, Mongabay-India’s visiting correspondent noted the excitement, pride, and worry palpable in the serene forests of Kuno in early September.

According to the Indian government, the 748 sq. km KNP devoid of human settlements forms part of the Sheopur-Shivpuri deciduous open forest landscape and is estimated to have a capacity to sustain 21 cheetahs. KNP already has the required level of protection, prey, and habitat to house the cheetahs says the action plan. Forty kilometres from the Sesaipura forest guest house, Madhya Pradesh Forest Department built a five square km enclosure with seven compartments to house the cheetahs for soft release.

The cheetah conservationists from Africa, and the ground staff of the forest department, have been working round the clock to ensure smooth translocation from Namibia and a safe stay for the cheetahs. Heavy rains had flooded all small and big streams, adding difficulties to the preparations. Muddy roads dotted with fallen trees due to the heavy downpour had also rendered several roads inaccessible, leaving only one way to enter the national park.

“Upon arrival, the cheetahs will be kept under quarantine and observed before release. I hope that we get a few days’ time, when the cheetahs are in quarantine, to make any last-minute changes, if necessary. We are also trying to shift the last leopard,” J.S. Chauhan, principal chief conservator of forest (PCCF Wildlife), told Mongabay-India.

Despite the challenges the foresters are addressing, for them, it is also a moment of pride to be part of the team that welcomes cheetahs. “It is challenging but exciting for me to get such a big opportunity. I feel that I’m a part of history,” said Divisional Forest Officer of KNP Prakash Verma who is leading the preparations on the ground.

“I have been serving the forest department for 32 years, and I have faced many such challenging times in Panna and Pench tiger reserves in Madhya Pradesh. But this time, the challenge is different from others as it is a first intercontinental translocation,” said Verma.

Competing predators may pose a challenge to the survival of cheetahs in Kuno, say experts.

“The leopard density at Kuno is particularly high. Competing predators in Kuno National Park include leopards, wolves, sloth bears and striped hyena,” said Vincent van der Merwe, manager of Cheetah Metapopulation Project, The Metapopulation Initiative, while talking to Mongabay-India. “These predators can jeopardise cheetah survival through the killing of their young, whilst leopards are known to kill adult cheetahs on occasion,” he added.

The forest department has herded 250 chitals as the prey into the enclosure in Kuno, according to media reports. “Cheetahs specialise in hunting small to medium-sized prey items, with 89% of their kills within the 14-135 kg weight range. Kuno supports sufficient prey animals that fall into this weight range,” said van der Merwe.

But there is apprehension about the cheetah’s ability hunt the chitals as the latter are not found in Africa. African cheetahs are used to hunting different prey such as gazelles (especially Thomson’s gazelles), impalas and other small to medium-sized antelopes, hares, birds and rodents.

“I expect it to be especially challenging for the cheetahs to hunt chital deer, which is a prey type (deer) that they are not used to in Africa. With any long-distance movement of animals (in this case, trans-continental), the cheetahs will find it challenging just to settle down, get used to the new location and their unfenced existence,” said Chellam.

Chellam feels that the “biggest challenge” is the size of the habitat. “Cheetahs exist in very low densities of about 1/100 sq. km. For a viable population to establish itself, it will require at least 5000 sq. km of prey-rich habitat, which currently India does not have,” he said.

Concerns have also been raised over the suitability of the African subspecies to Indian habitats, originally home to the Asiatic subspecies.

“It is probable that the level of genetic differentiation between African cheetah subspecies and the Asiatic cheetah is not sufficiently great as to genetically impact the ability of African cheetah to survive in India,” the authors write in the paper.

“Genetic modeling confirms that the severe population bottleneck of African cheetah is many thousands of years old, suggesting that low diversity has not precluded the survival of cheetah over vast, and ecologically variable, African regions over that period,” adds the paper.

Researchers suggest, “While we see no genetic reason precluding re-introduction, consideration of local environments and ecology, animal behaviour, anthropogenic pressures, the likelihood of success, and the probable impact on other potentially endangered species is, of course, significant.”

The Cheetah Action Plan says, “Cheetahs from Southern Africa are the most suited population, ecologically and behaviourally. It also meets source population criteria as per IUCN Guidelines. There would be no genetic mixing of subspecies, and it is the only population that currently meets the requirements of a source.”

“Southern Africa has the largest cheetah population, ~ 4000 (about 66% of the global population). It is a source of continuous supply of legally obtained healthy cheetah for translocation and future supplementations without detrimental impacts on the source populations,” the plan says.

Seven cheetahs were successfully reintroduced from South Africa to Malawi in the African continent in 2017. This reintroduction is considered successful as all cheetahs showed release site fidelity, and all females birthed their first litter within four months of release, according to a Cambridge University Press research paper assessing the success of Malawi reintroduction. “Within two years of reintroduction, the newly established population consisted of 14 cheetahs, with demographic attributes similar to those recorded in the source populations,” the paper added.

But the reintroductions into Malawi were less challenging as both reintroduction sites were fully fenced. “We anticipate challenges in India initially. However, this is a long-term project. Fencing is very important for this kind of project. In South Africa and Malawi, fencing proved to be a valuable tool in eliminating ranging behaviour in South Africa and Malawi, allowing for population growth. There have been no successful cheetah reintroductions into unfenced systems,” said van der Merwe in an email interaction with Mongabay-India.

Vincent van der Merwe said that the absence of fencing in Kuno may result in the interaction of cheetahs with local communities as the big cats are likely to roam beyond Kuno’s core area post-release. He suggests an effectively implemented compensation scheme for livestock losses can be considered.

The forest department has been running a campaign named ‘Chintu Cheetah’ to spread public awareness in the local communities. The Regional Museum of Natural History (RMNH) has been conducting activities such as lectures and presentations on cheetahs in schools neighbouring KNP.

Vincent van der Merwe also talked about the advantages India is likely to have in translocation. “There are many successful examples in India where forest department has managed to grow large predator population near human settlement. India has compensation scheme for livestock losses or does it have something to do with the philosophical outlook on life that people in India have?” he wondered.

He added in a mail, “They (Indians) subscribe to eastern religions, primarily Hinduism, which advocate custodianship of nature, with humans forming part of the greater system. In Africa, we subscribe mainly to the Abrahamic religions (Christianity, Islam, and Judaism), which advocate human dominion over nature. The Abrahamic religions prescribe an anthropocentric (human-centric) worldview, with human dominion over nature (the land must be tilled and humans must procreate). It makes co-existence difficult to achieve.”