This is the first article in a two-part series on oil palm cultivation in Telangana. Part Two discusses the state’s shift from traditional crops to water intensive crops such as paddy and oil palm and their potential impacts on the environment.

On a cool, mid-November evening, Vidya Sagar, a 56-year-old farmer, was rushing from one corner of his 3.2-hectare oil palm field to another, hurriedly gathering fresh fruit from the trees before the sun sets. Sagar is a resident of Khammam district’s Medepally village in the state of Telangana. He plans to expand the oil palm plantation on the remaining 1.2 hectares of his land, given that the government is incentivising the crop.

“There is no reason to think otherwise,” he says, listing many benefits the state government offers for oil palm cultivation: an assured procurement of all his produce, free electricity which makes irrigation cost-free and subsidised seedlings provided by oil processing firms.

“Oil palm (from which palm oil is derived) cultivation has proved very profitable for the farmers for several reasons. First, there is huge government support to grow the crop. There is little risk of monkey and wild boar attacks on these crops. Oil palm trees can withstand harsh weather conditions, and there is far less labour involved in growing them,” Sagar tells Mongabay-India while working on his oil palm field.

Another farmer, 62-year-old Hariprasad S. from the same village, adds to the ongoing conversation. He has converted four hectares of his mango farm to an oil palm farm. The reason, he says, was the assured procurement of all his produce by these oil processing firms.

He shows his diary in which he has written the rates at which he sold his fresh fruit at the nearby Sathupally oil processing unit in Khammam, over the last one year. The best price he got in the last six months was around Rs. 13,000 per tonne. Usually, he is able to pick and sell oil palm fruits about twice a month. He claims that if these rates continue, he could earn around Rs. 3.32 lakh (Rs. 332,000) annually, from each acre (o.4 hectares), which would mean an annual income of almost Rs. 33.2 lakh (Rs. 3.32 million) from his four-hectare land.

In Medepally village, where Sagar and Hariprasad are from, at least a dozen farmers are into oil palm farming. Many of them opted for cultivating this crop, more than 30 years ago. Vidya Sagar is one among them.

“Currently, there are 23,000 farmers in Telangana who are into oil palm cultivation. We have around 36,421 hectares under oil palm cultivation, out of which 16,187 hectares are fruit-bearing fields,” informed an official from the state horticulture department, requesting anonymity.

Telangana’s oil palm farmers see their fortune growing with the country’s increasing consumption of palm oil, which is derived from the oil palm fruit.

Palm oil is a widespread component of products in the Indian market – from daily use products like soaps and toothpastes to edible products like biscuits, cooking oil, chocolates and more. Globally though, the use of palm oil is controversial as the supply chain is usually riddled with environmental issues.

India consumes more than nine million metric tonnes of palm oil annually and its edible oil import bills are in trillions of rupees. India is the world’s largest importer of palm oil. It needs to import this oil to meet the gap of 61.80 percent between the total domestic demand and the local production. 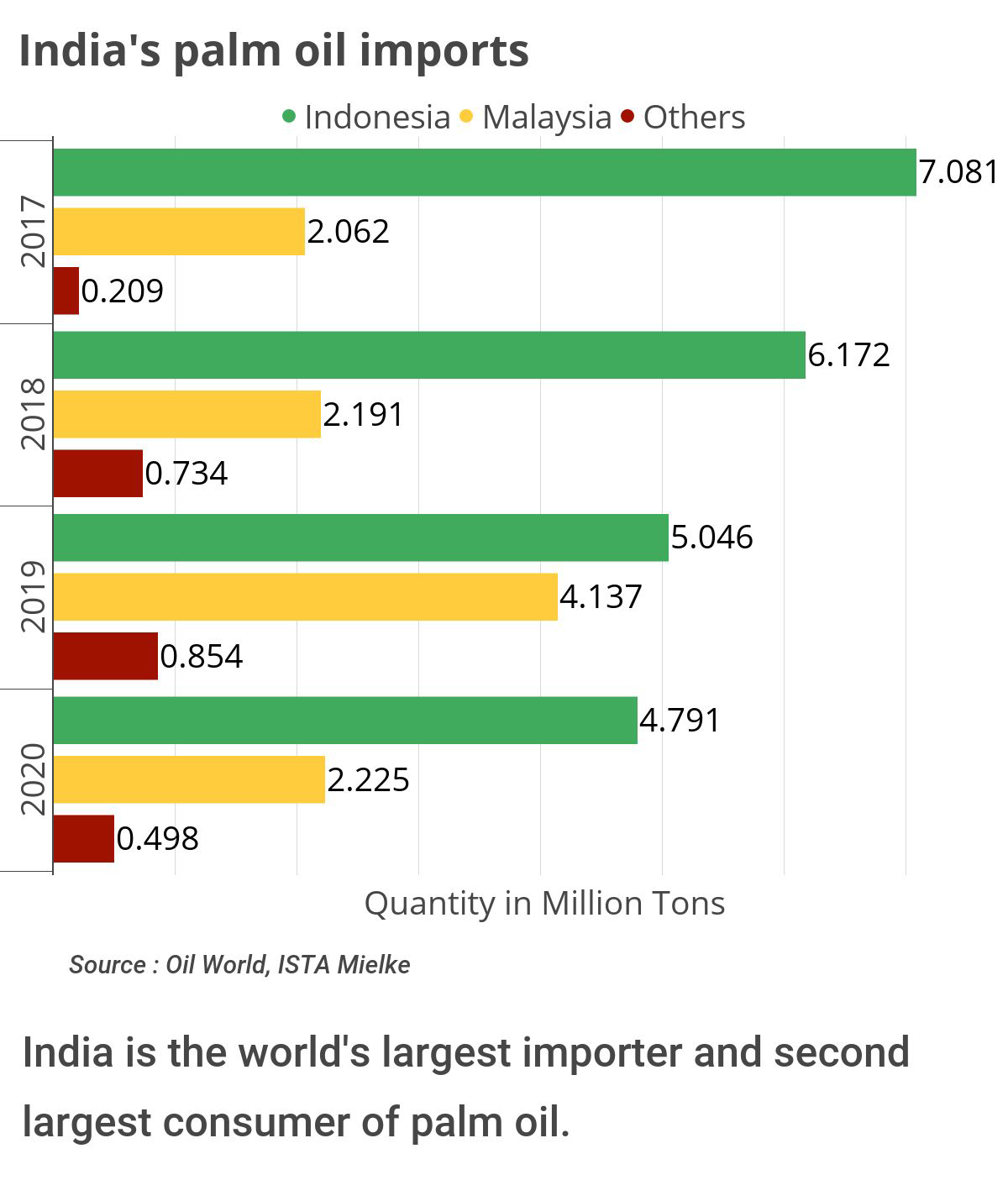 India and other palm oil consuming countries depend heavily on producer countries in Southeast Asia, such as Indonesia and Malaysia for imports. However, the environmental impact of large-scale oil palm cultivation in these geographies is of concern, globally as the regions continue to be associated with deforestation and peatland destruction for oil palm cultivation.

To ease the burden of the treasury and lower the dependence on imports, the union government is on a mission to expand the cultivation of oil palm across the country under its ambitious National Mission on Edible Oils-Oil Palm (NMEO-OP) programme. It aims to increase the area of oil palm to 10 lakh (one million) hectares by 2025-26, up from 3.5 lakh (350,000) hectares in 2019-20. Telangana sees a share for itself in this pie.

Oil palm plantation is not new to the southern Indian state of Telangana, second after Andhra Pradesh in crude palm oil production. It started in the early 1990s when some farmers in districts like Khammam started growing it with seeds imported from other countries. The state now has around 36,421 hectares of land under oil palm plantation.

In 2021-22, the state produced 46,171 MT (Metric Tons) of crude palm oil. Most of these oil palm plantations are confined to four districts of the state – Khammam, Bhadradri Kothagudem, Suryapet, and Nalgonda. However, the state government has decided to go big on oil palm farming, beyond the target given by the union government.

A senior official from the state horticulture department told Mongabay-India that the union government had given the target of growing oil palm over 1,21,405 hectares in the state in the next four years. But the state has decided to bring 8,09,371 hectares of the state land under palm oil cultivation in the same period. The plan is also to expand its plantation in 27 out of a total of 33 districts of the states. Six districts that face water crises and urban areas in the state are not part of this plan. Overall, the state wants to expand oil palm plantations to 22 times the current land under oil palm.

In the latest annual state budget, presented by state finance minister T. Harish Rao in March, the government announced a Rs. one billion budgetary allocation for covering an additional 1,01,171 hectares of land under oil palm cultivation in the current financial year 2022-23. Data suggests that the government anticipates investing a total of Rs. 72 billion between 2022-23 and 2026-27 to boost palm oil production in the state.

Samnini Nageswar Rao is another farmer from Medepally village of Khammam district. He explained how much he invests in oil palm maintenance annually. As electricity in Telangana is free for farmers, there is no cost involved in irrigating their land with motor pumps. In each acre of land, there are around 56 oil palm trees. They need anywhere between Rs. 15,000 to Rs. 22,000, which includes the cost of fertiliser, manure, and others annually, whereas the annual profits they get is around Rs. three lakh (Rs. 300,000) per annum for each acre (0.4 hectares).

The state government supports the farmers opting for oil palm plantation in their fields. “In palm oil, we get subsidies for drip irrigation equipment, fertiliser and intercropping for the initial four years. I have planted groundnut as an intercrop in the space left between oil palm trees, to make profits from the farmland. It will continue until the palm oil trees start bearing fruit,” says Pratap Kumar Reddy, another palm oil farmer from the Thirumalagiri village of Suryapet district. He recently switched to oil palm farming from cotton farming. All these subsidies, however, cease to exist after four years when the palm trees start bearing fruits, he complains.

Free electricity and irrigation matter as most farmers use groundwater for oil palm cultivation in the state. Most of the farmers Mongabay-India met in Khammam, Kodad and Suryapet districts claim that they use water from wells and borewells to cultivate oil palm. Each mature oil palm tree requires around 200-250 litres of water per tree.

Besides the relief in irrigation, the farmers get support for other purposes. For example, oil-producing companies in the state have their nurseries where they grow saplings and provide them to farmers at subsidised rates. In Telangana, the number of oil-producing companies has increased from three to eleven in the last five years. They have 30 nurseries in the state now, the highest in the country, as claimed by the state horticulture department.

One of the key attractions of oil palm farming is the buyback guarantee that these oil companies provide. It has lured many farmers to shift to palm oil, farmers admitted during the conversation with Mongabay-India.

These farmers are confident about the price as it is decided by the state horticulture department, depending on the international market. It is also a prerequisite for the department to establish factories in each district before it is taken up for palm oil plantation.

Through the National Mission on Edible Oils – Oil Palm (NMEO-OP) scheme, Telangana government gives incentives to farmers to grow intercrops like pulses, groundnut, and other crops for four years of new palm oil gardens during this transition period to compensate for the losses due to the shift. These include an 80 percent subsidy to start drip irrigation in palm oil gardens, the government bearing the majority of the cost of palm oil plant material, and assistance of Rs 10,500/hectare annually for intercropping, among others. The government plans to give “subsidies of Rs 26000, Rs 5000, and Rs 5000 per acre in the first, second and third year of palm plantation.”

Experts find the decision to expand palm oil farming beneficial for the farmers. I.V. Srinivas Reddy, an associate professor at Professor Jayashankar Telangana State Agricultural University, has researched palm oil production. He told Mongabay-India that oil palm plantation has some added benefits too. He claimed that studies have shown that it has good carbon sequestration tendencies, while the by-product of oil palm could also be used in mulching activities.

“First of all, oil palm uses four times less water than crops like paddy and sugarcane. There are other benefits, too, with palm oils. It has helped farmers increase their incomes and reduce agriculture-related drudgeries and risks of crop failure and pest attacks. As these are long period crops which are grown up to 25 years to 30 years, this assures a sustainable income for the farmers,” he said.

While there is a rosy picture painted at one end, at the other, there are challenges in oil palm cultivation. Many farmers said there is nothing for small and marginal farmers in this business. Hariprasad, the farmer from Medepally, admits that most oil palm farming is confined to big farmers in the state who can devote more than two hectares of their land to oil palm plantations. The farmers with small landholdings seldom take up this plantation, he adds. This is because there is no productivity in the initial four years from the land. These plants have long gestation periods, and the fruits are born only after four years.

Puspawati Shirarao, a farmer in Kodad in Khammam district, for example, uses canal water from one of the water reservoirs from Kodad. During summers, especially in May, the low water availability leads to less production of fruits, she shares. She says intercropping can be done in oil palm fields primarily in the new ones, up to the initial four years. “After four years, when the palm oil trees grow bigger, their strong roots expand underground, and the soil fertility in the free areas in the farm gets affected. So, it is tough to grow any other crop in these aged gardens,” she tells Mongabay-India.

Some experts say that the ambitious scale of expansion of oil palm cultivation in the state may not be economically viable. Ramanjaneyulu G.V., an agricultural scientist at the Hyderabad-based Centre for Sustainable Agriculture, told Mongabay-India that the impulsive decision of the state government to expand oil palm cultivation in the state could create new problems. “Till now, the state government is giving much thrust to a particular crop. The bumper subsidies and government support have forced many farmers to shift to this plantation. But what will happen if this support ceases to exist in the future? This comes at a time when the state is now importing vegetables and other traditionally produced crops in this state. This could not be an economically viable option for the farmers and the agriculture sector at large,” he said.