The river routes between India and Bangladesh carry tremendous economic and geostrategic significance for both countries. However, environmental management issues have rendered most of these routes useless.

India and Bangladesh signed a protocol for using the waterways to carry goods in 1972. However, only three of the designated 11 routes are in regular use at present, as most of the routes lack depth for the navigability of large vessels. Some are used irregularly, while others are not even used once a year.

Bangladesh stands to gain a number of economic advantages if these routes are used regularly.

It could potentially provide various services to Indian vessels during their voyage, which would facilitate growth in the service industry and expand logistics businesses. Bangladesh has also long been looking to increase exports to India’s northeastern states, which the 1972 protocol has the potential to facilitate.

For India, the use of the waterways has geostrategic significance as well.

Geographically, mainland India is separated from its northeastern states by Bangladesh and is only connected via the narrow Siliguri corridor. India’s primary interest in the protocol is to efficiently connect its northeast with the main hinterland by using the waterways.

Poor navigability, however, stands in the way.

Only about 5,995 km (3,725 mi) of Bangladesh’s waterways are navigable by mechanised vessels during the monsoon season and during the dry season, the number dwindles to 3,865 km (2,400 mi) — just a portion of the country’s 24,000 km (2,400 mi) of all waterways, according to the Bangladesh Inland Water Transport Authority (BIWTA), which has carried out massive dredging and excavation work in recent years to add 2,300 km (1,429 mi) of waterways to the country’s river system.

The waterways are also the most cost-efficient mode of transportation for both countries.

Routes identified in the protocol 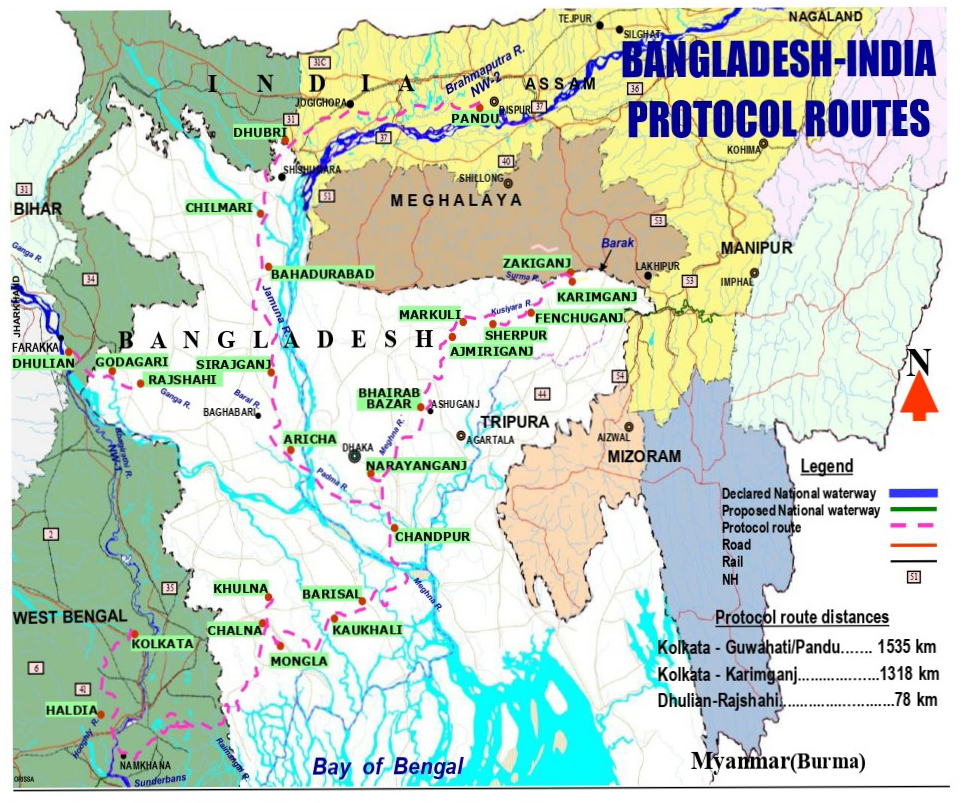 Most of the routes identified in the protocol carry a huge amount of sediment that flows down from the upstream, reducing navigability for cargo ships. Furthermore, some of these routes are not suitable for plying larger vessels.

“Naturally, operators are not interested as running small vessels will not guarantee profits from the trips,” said Maminul Haque Sarker, senior adviser on river, delta and coastal morphology at the Center for Environmental and Geographic Information Services (CEGIS).

According to available data, only 12 cargo trips were made between Kolkata, West Bengal, to Pandu, Assam, through Monlga-Haldia in the 2020-21 fiscal year, and only three in the next fiscal year.

In 2020-21 the number of cargo trips made between Narayanganj, Bangladesh, to Karimganj, Assam, was only one, although it reached 15 the next year.

Some routes, like Rajshahi-Dhulian, remain inaccessible during the dry season as the river does not have enough water. It was not used once during the last two fiscal years.

Another important business route from Kolkata to Assam is through the Surma-Kushiyara River in Bangladesh, which is currently inoperable.

“Physical work for channel movement is going on with the cooperation of the Indian government as the latter believes the route will reduce their time and expenditure of carrying cargo,” said Ainun Nishat, a hydrology expert and former vice chancellor of Bangladesh’s BRAC University.

Is dredging the only solution?

Bangladesh is an active delta formed by sediments carried by rivers coming down from the Himalayan region. The two neighboring countries, Bangladesh and India, share at least 54 such common rivers. Agriculture — a major livelihood source for the people — navigation, and inland fisheries, are all hugely dependent on the water of these rivers, which are also important for resisting salinity intrusion from the sea.

These rivers and water bodies annually carry around 2.4 billion tons of sediments, including sand, clay and silt.

The Bangladeshi government has recently awarded a $71 million contract to a Chinese company to dredge rivers as part of a World Bank-financed project to boost transport routes between mainland India and its northeastern states via Bangladesh.

“The dredging of the routes will enhance Bangladesh’s connectivity with the seven northeastern states of India through the use of Ashuganj river port, which is 50 km (31 mi) from Agartala in Tripura. This will enhance trade and people-to-people contact between Bangladesh and India,” Matiur Rahman, a member of the Bangladesh Inland Water Transport Authority, told the media when the contract was signed.

“Completion of dredging of the Dhaka-Chittagong-Ashuganj River route will allow ships to come to Dhaka’s Pangaon Inland Container Terminal, which will accelerate the pace of trade and business,” Rahman added.

Nishat suggested that besides taking on extensive dredging work, the rivers need proper management like maintenance of channels and embankment protection, otherwise silt will close the channels in a short time.

This story was first published on Mongabay.com.

Banner image: A river in Bangladesh. Photo by Mashrik Faiyaz/Flickr.