The Tokhü Emong Bird Count (TEBC) is a citizen science initiative with an aim to celebrate the birds of the state of Nagaland. The event has been hailed as Nagaland’s first bird documentation event by Bird Count India, a bird monitoring and documentation collective and one of the organising groups. Other organisers include the Wokha Forest Division and the Divisional Management Unit, Nagaland Forest Management Project (NFMP). The event took place over four days from November 4 to 7, 2022, and involved 18 e-birders from four districts of Nagaland – Dimapur, Kohima, Peren, and Wokha. The e-birders were able to identify 178 species of birds.

The TEBC was the brainchild of Lansothung Lotha, a district forest ranger with the Nagaland Forest Department and an avid conservationist. Lotha discussed the process of the TEBC with Mongabay-India, stating that participants were primarily students invited from schools. The aim was to help nurture a love for birding and conservation amongst young participants. The organisers conducted workshops on birding and taught participants how to use and upload their data on eBird, the online bird observation database created by the Cornell Lab of Ornithology.

The preliminary report of the TEBC event released by Bird Count India details a day-to-day summary of the event and includes a list of the birds that were recorded by the participants. Some notable birds that were sighted include the brown shrike, black-tailed crake, blue-napped pitta, brown bush warbler, spot-breasted scimitar babbler, brown-capped laughingthrush, eye-browed laughingthrush and the flagship species, Amur falcon.

Speaking to Mongabay-India about the TEBC, Mittal Gala, coordinator for Bird Count India (BCI), said, “One of BCI’s goals is to have data on the distribution and abundance of Indian birds at the finest scale, which means data from the smallest place (a city, town, or village) to the largest scale (across the country).”

Gala revealed that Nagaland was home to certain bird species that are not found anywhere else. Through TEBC, BCI hopes to keep track of these species of birds and identify those that may be in need of conservation attention.

The event was organised keeping in mind the peak season of the Amur falcons’ migration, which takes place in the first week of November every year in the Wokha district of Nagaland. The organisers took the example of bird count events in other states conducted during festivals, such as the Onam Bird Count (Kerala), the Pongal Bird Count (Tamil Nadu) and the Bihu Bird Count (Assam). Accordingly, the event took place during one of the festivals of the Lotha Nagas, the Tokhu Emong festival. Tokhu Emong is celebrated post-harvest, in the first week of November. The term ‘Tokhu Emong’ means to rest from field work for feasting after harvest season. Notably, during this festival, villagers are restricted from hunting, fishing, trading, or travelling.

Hornbills endangered in the land of the Hornbill Festival

Apart from the two mentioned hornbill species, there are three other species of hornbills in the state: the oriental pied hornbill, the wreathed hornbill, and the great hornbill. Lansothung Lotha, who is also a member of the IUCN Hornbill Specialist Group, disclosed that hornbills are being pushed to extinction in the state.

Choudhury revealed that hornbills are an ‘indicator species.’ This means that their presence or absence in a particular region indicates certain environmental conditions and changes. “Hornbills require mature trees for nesting. Their absence in an environment signifies that there are no more mature trees in the area from which they can nest.” Their noted disappearance from Nagaland’s forests has been a key indicator of the state’s rapidly declining forest cover. The Global Forest Watch reported that from 2000 to 2020, Nagaland experienced a net change of -130 square km (-0.85%) in tree cover.

Hornbills are just one of many bird species that are being pushed to extinction in the state. Bringing back hornbills and other endangered bird populations would mean preserving existing natural forest areas, which would require drastic changes to agricultural lifestyles and traditional customs that have been in practice for generations.

The major contributing factors to wildlife and biodiversity loss in the state include jhum cultivation, hunting, felling and logging of trees, and more recently, developmental activities like road construction and widening, and monoculture, amongst others.

Jhum cultivation, a traditional form of agriculture, requires clearing of a piece of forest or vegetation by burning and then using the land for cultivation. After harvest, the land is left fallow to allow plant regrowth until it becomes reusable in the next cycle. In Nagaland, jhum cultivation was once considered a sustainable option since jhum cycles spanned two to three decades, and land holdings were larger. However, in recent times, there is much debate over the practice.

Speaking to Mongabay-India, Bano Haralu, veteran journalist and a leading conservationist in Nagaland, said that jhumming is no longer practiced on a large scale like before because land holdings are now smaller. Therefore, jhum cycles have also become significantly shorter and now last only a few years. This is increasing pressure on the land, leading to soil nutrient depletion, and hastening the cycle of slashing and burning forests.

Another contributing factor to the loss of forest cover has been hunting. A survey conducted in 2013 by researchers from Sálim Ali Centre for Ornithology and Natural History Anaikatti, Tamil Nadu, studied wildlife exploitation in the markets of Tuensang town. The paper revealed that “annually 13,067 birds and 3,567 mammals were sold in the Tuensang market alone, which fetched about Rs. 18.5 lakhs per year.” These numbers were from one district alone. If more surveys were conducted in other districts, the numbers would be higher.

However, traditional hunting is also a dying practice. Nuzota Swuro, a seasoned farmer who hails from Chesezu village, stated that now, “the main reason for hunting is the prestige and money that comes with it. Wild meat is rare, a delicacy.”

Lack of wildlife and bird documentation in the state

Lansothung said that the current scenario when it comes to biodiversity loss is quite alarming in the state. “There is rapid decline of species, but most people are indifferent to this crisis.”

However, without proper documentation of bird and wildlife species in the state, difficulties arise in tracking the success or failure of such initiatives. There is an urgent need to record bird and wildlife populations and survey the state of their habitats in Nagaland.

A 2011 paper that studied wildlife hunting and conservation in Northeast India stated that “quantitative information of the effect of observed levels of offtake on wild populations of hunted species in Northeast India is in desperately short supply.”

Speaking about bird documentation in the state, Choudhury said that many more ornithological surveys are required. “The progress so far is quite slow.”

While organising the TEBC event, Lansothung and his team faced the challenge of garnering enough birders to participate in the event, since birding is a relatively new concept in Nagaland. 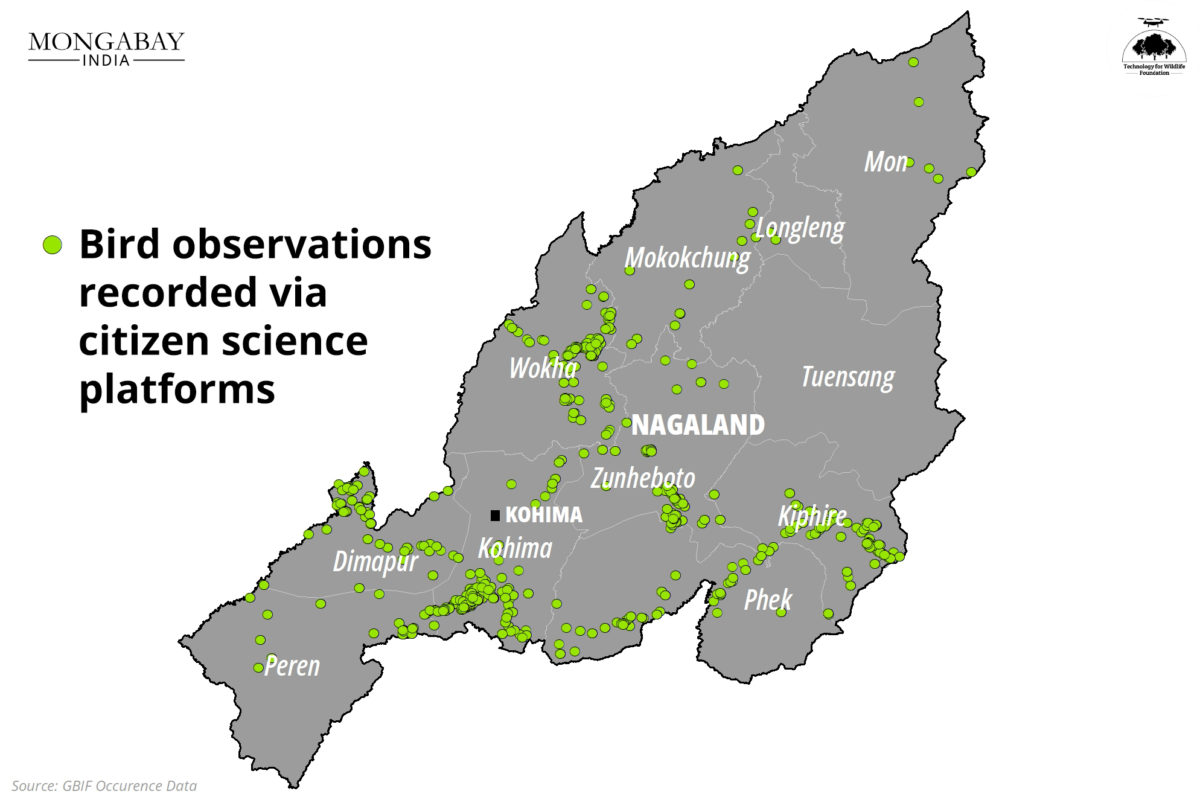 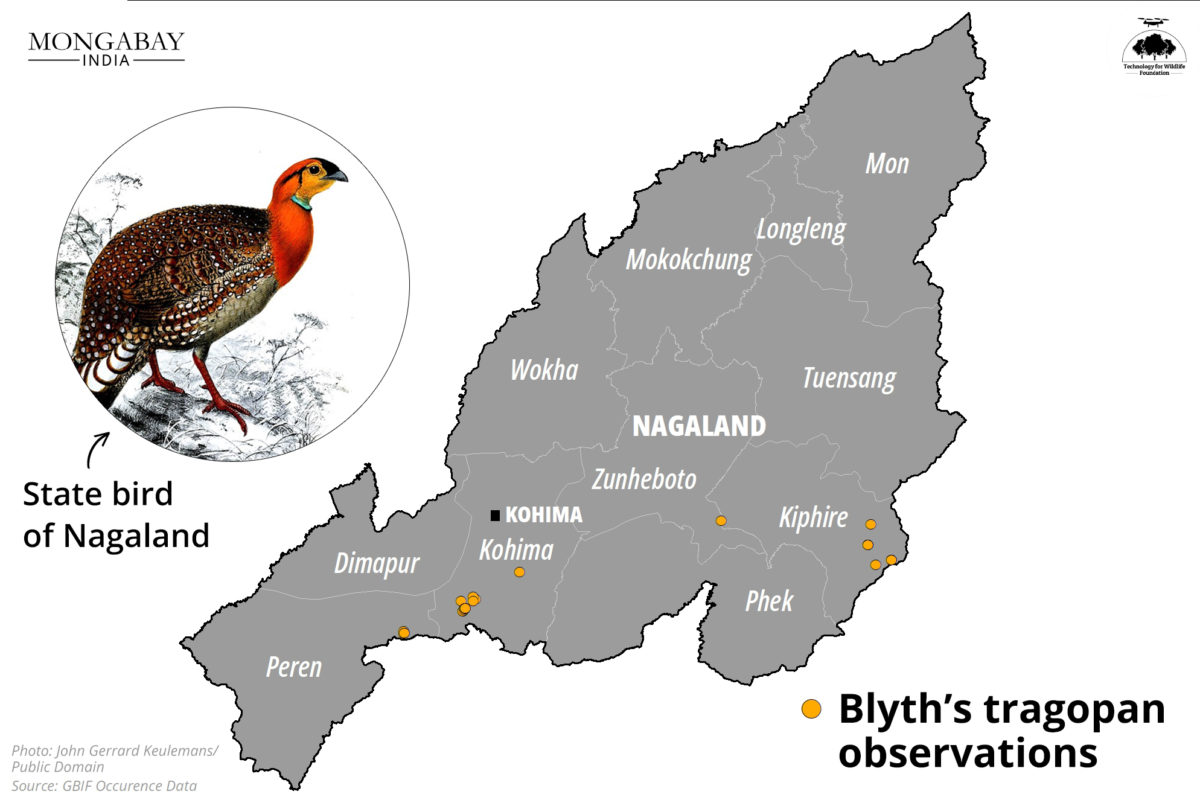 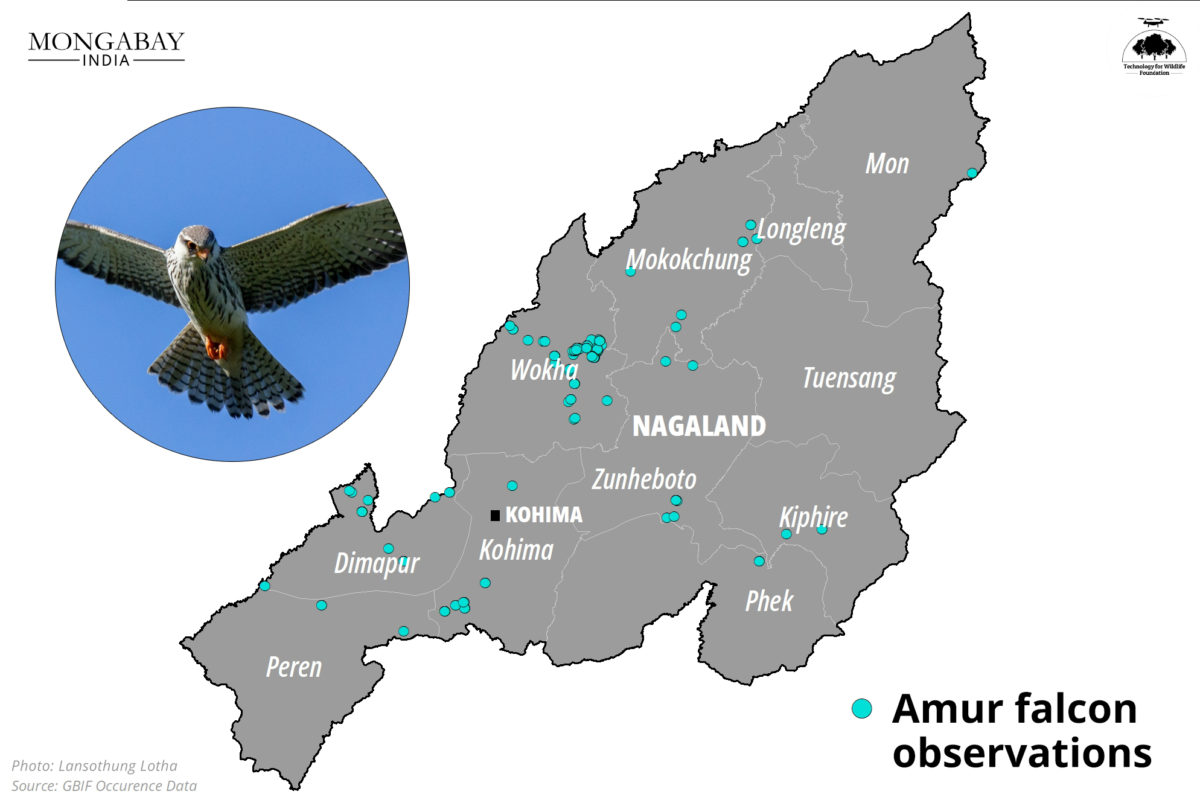 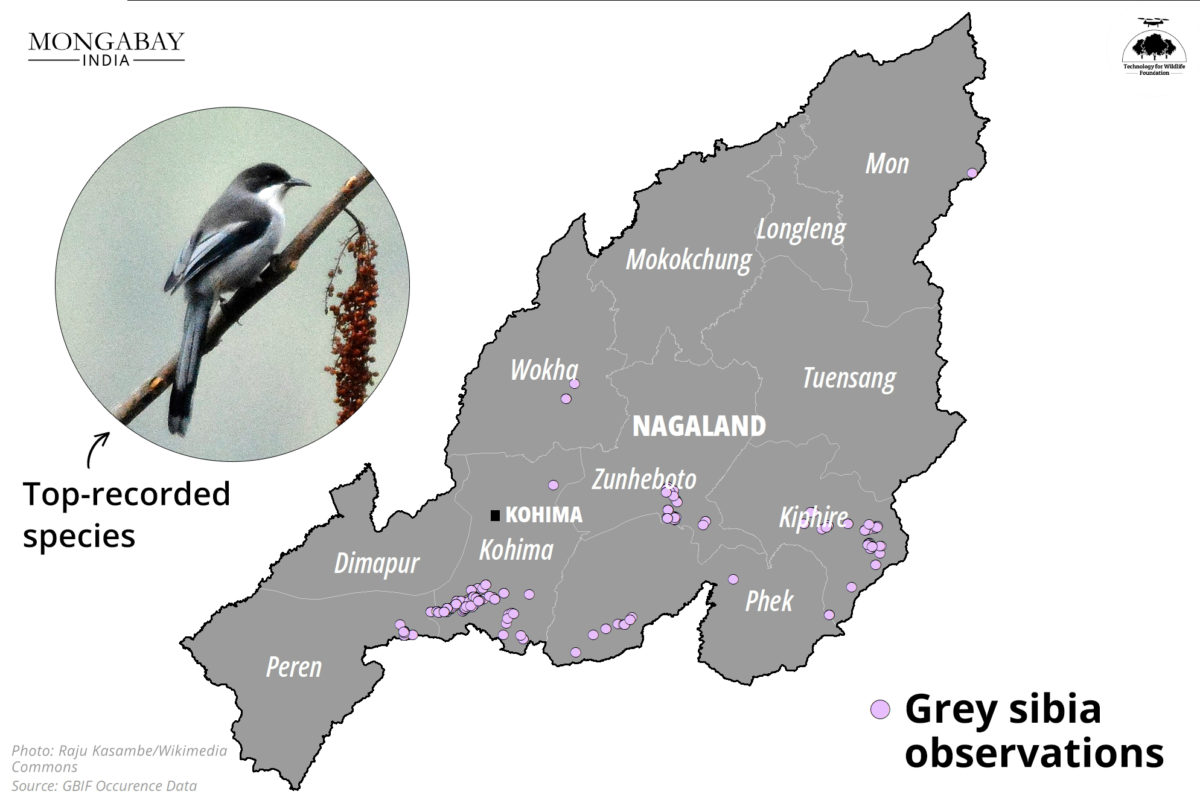 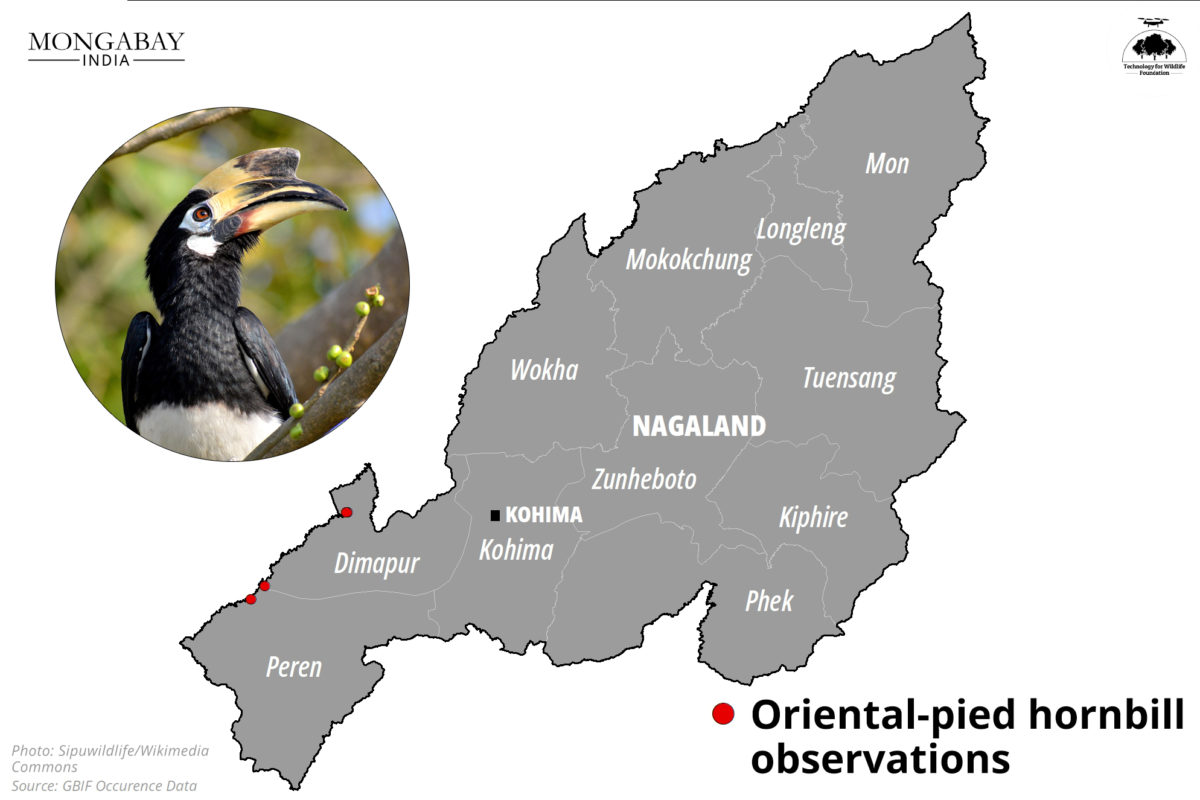 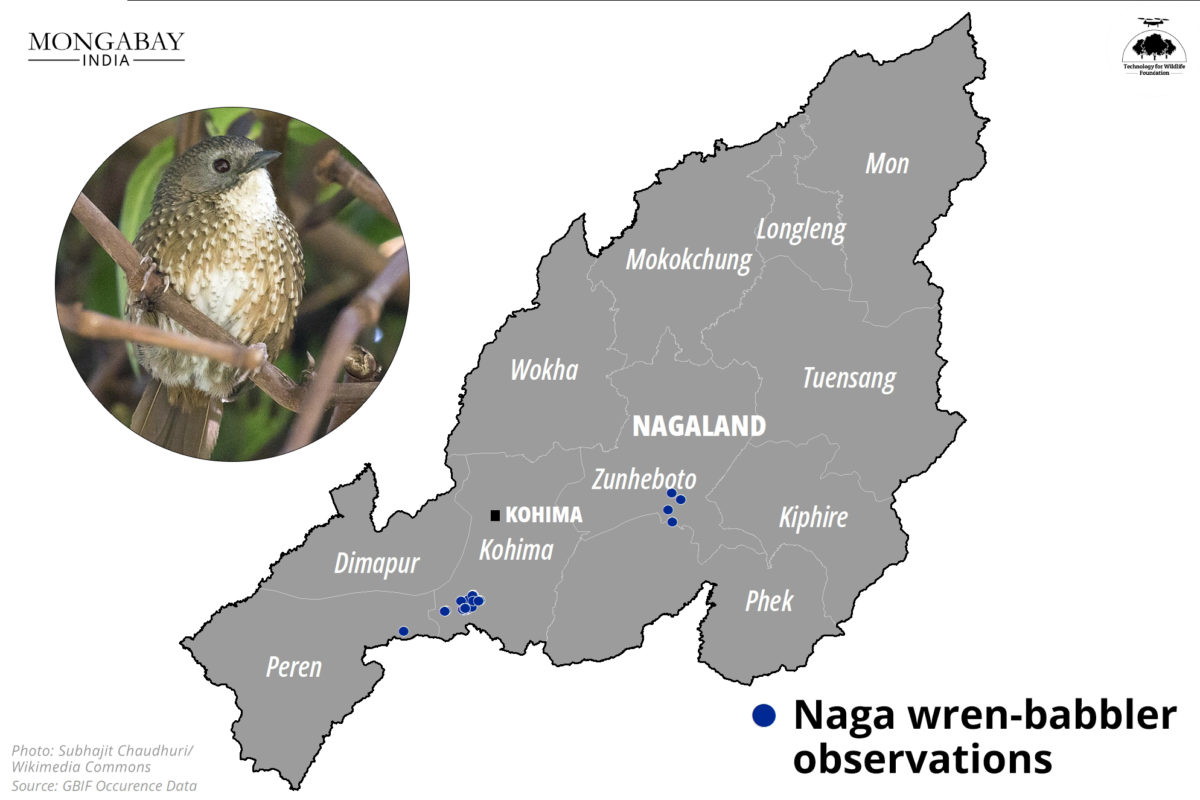 Note: The citizen science records displayed do not indicate the comprehensive presence/absence of the species and its complete distribution. Map by Technology for Wildlife Foundation and design by Kartik Chandramouli/Mongabay.

“Regional events like TEBC, as well as periodic birding activities, can help fill this void. It can generate interest in birding, which leads to further documentation. Such documentation can help generate baseline data to compare the trends of birds year after year.” Gala took the example of the 2020’s State of India’s Birds Report, which revealed long and short-term distribution and abundance trends for 867 species. This report analysed 10 million observations uploaded by birdwatchers on eBird.

Nzanthung Ezung, a student from Tetso College, Dimapur, who participated in the TEBC event, said that he had never taken part in birding before the event. He was able to count 18 birds in total. Speaking about the experience, he said, “Bird watching is fun. I might develop a passion for this.” Ezung’s experience promises hope for more people to become avid birders in the state. However, in order for this to happen, more awareness needs to be created.

Haralu stated that there is a serious lack of environmental and wildlife education in the state. To tackle this, Haralu suggested that the indigenous and scientific communities be brought together to interact and learn from one another.

Speaking about the role of the government in bird and wildlife conservation, Choudhury’s suggestion was to, “Encourage research of birds and other wildlife and regularly conduct awareness on the same.”

Choudhury, who spent nearly four decades surveying wildlife in the northeast praised the TEBC as an excellent effort, stating that, “In areas such as Nagaland where community ownership of the land covers the bulk of the area, such local initiatives would ensure local support for conservation.” Land is owned by individuals, clans or communities in Nagaland. This system of land ownership means that the people are the most well-versed in the biodiversity around them and are thus the best stewards for conservation.”

Recounting his visits to Nagaland, Choudhury also mentioned the village council system that is practiced in every village: “In Nagaland there was a plus point; the village headmen were powerful and have a say on every major issue.” He said that such a system could be a tool that can be used to implement conservation efforts. Because of these factors, community-based initiatives are a viable solution for conservation in a place like Nagaland.