by Vaishnavi Chandrashekhar on 22 July 2019

Last month, June 2019, the Indian government created its first ministry for fisheries. Although it clubs fishing together, rather oddly, with animal husbandry and dairy, the move fulfills a long-standing demand of the country’s fishing community and becomes the latest, and potentially the most important, of India’s slowly growing efforts to better regulate and manage its fisheries.

Until recently, this growth was largely unregulated, leading to over-capacity of fishing boats, inter-state conflict and overfishing of some species. But as yields have slowed in the past decade, including an unexpected crash in the sardine catch, India’s coastal states have begun to take measures to make fishing more sustainable. Some are also pressing for better national regulation.

In recent years, some states have introduced rules to extend the national ban on fishing during the monsoon — the one notable pre-existing policy instituted to let fish spawn as well as improve fisherfolk’s safety. Some new state rules also regulate gear to reduce indiscriminate fishing. These include controls on the mesh size of nets as well as outright bans on practices like bull trawling, in which massive nets sweep everything up from the seafloor. Southern states are also instituting rules on the minimum legal size of fish to reduce the catch of juveniles before they can spawn and replenish the population.

The government has good reason to regulate this sector: it supports 4 million people, of which almost 1 million are active fishers. India’s tropical oceans host a great diversity of fish — more than 400 species may appear in one trawl haul — and officials estimate the annual catch could grow to as much as 4.4 million metric tons. Marine exports for the country crossed $7 billion in 2017-2018, up from just $5 million in 1971.

Fishing communities also seem to be growing more amenable to management. “People are beginning to see that unbridled growth can lead to crisis,” Mohamed said. 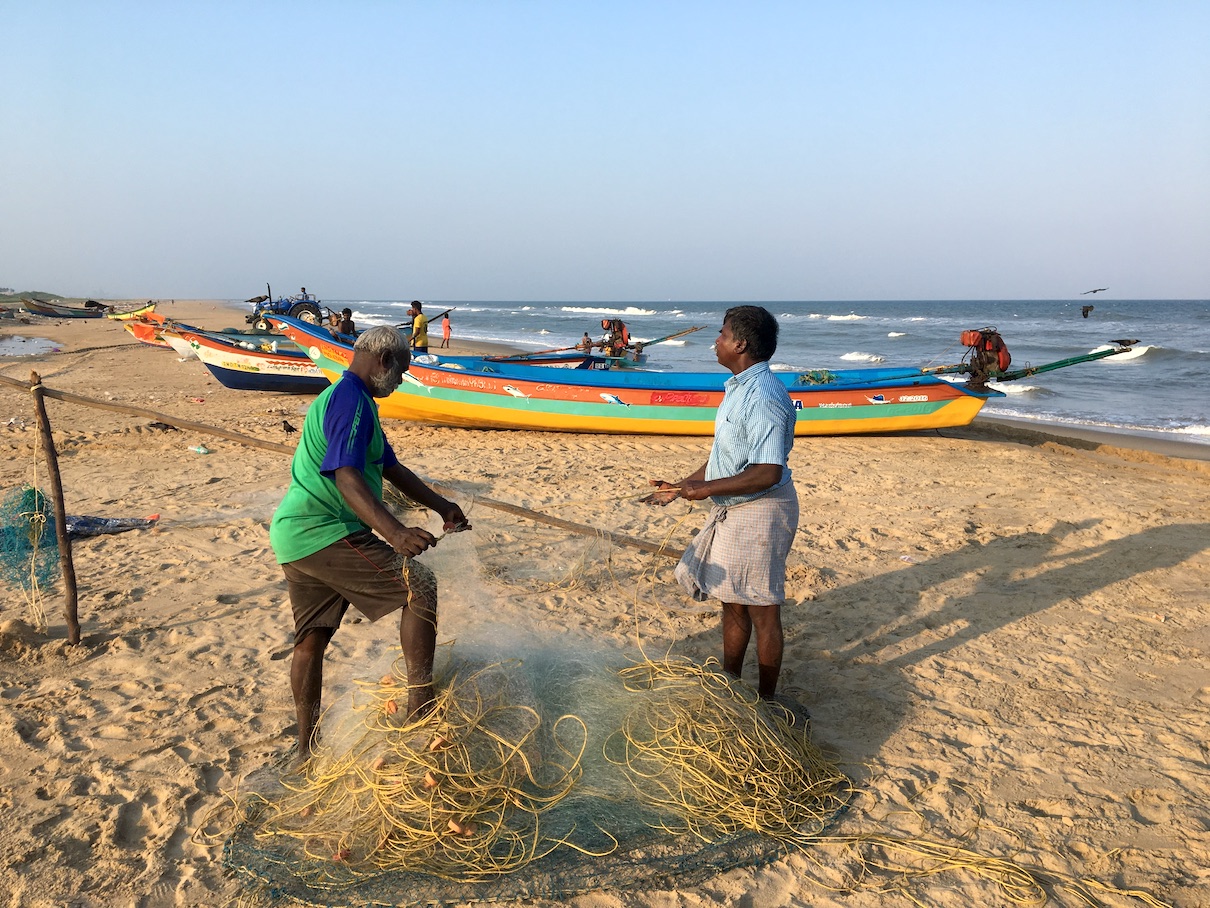 Members of the traditional fishing village of Urur-Kuppam in the southern Indian state of Tamil Nadu tend their gear. Increased competition and climatic changes are affecting the livelihood of such communities. Photo by Vaishnavi Chandrashekhar.

Crisis is what prompted the southwestern coastal state of Kerala to lead the way in this spate of new fisheries regulations. The Indian oil sardine (Sardinella longiceps) is a staple food in this state and a mainstay of its fishing industry. Catch of this small fish boomed through the 2000s, driven by intensified fishing. The fish had also expanded its range northward due to warming waters, giving other states a bigger catch than before. But after a record-high catch of 390,000 metric tons in 2012, sardine landings in Kerala plunged to 45,000 tons in 2016.

Scientists, commissioned to study the problem, found that the crash was caused mainly by environmental factors, including an El Niño one year, but also by overfishing. Fishers constantly exceeded the maximum sustainable yield of the fishery between 2010 and 2013, the scientists found, and were catching an increasing number of juvenile fish.

The crisis prompted the Kerala government to implement a range of measures, beginning with a ban on fishing juvenile sardines in 2015. The sardine catch started rebounding in 2017, which many observers attributed to these measures.

The state also speeded up a slew of other long-pending recommendations, Mohamed said. In 2017, new laws were set up by a system of village and district councils of fishermen, scientists and officials to manage local-level fisheries. The state also amended the laws to get control over net manufacturers at the factory level, and expanded restrictions on catching juveniles to cover 58 species of fish, up from 14 species.

The sardine crash prompted changes beyond fishing regulations in Kerala. It had led to a bust in the Indian fishmeal industry in the southern states of Karnataka and Tamil Nadu; sardines are used in high-quality fishmeal supplied to the aquaculture industry. Demand from expanding fishmeal plants helped drive overfishing of sardines. After the crash, larger fishmeal companies formed an association and committed to following minimum legal size standards in procuring fish.

This sudden sense of responsibility didn’t just arise from the emergency, however. Indian seafood exporters have to increasingly fulfill responsible-sourcing requirements in many international markets. One-third of the U.S.’s farmed shrimp comes from India, for instance. “With traceability standards coming in, we have to ensure sustainable practices,” Showkat Showry, head of the Indian Fishmeal and Fish Oil Exporters Association, told Mongabay.

“Markets are becoming a driver for regulation,” Mohamed added. 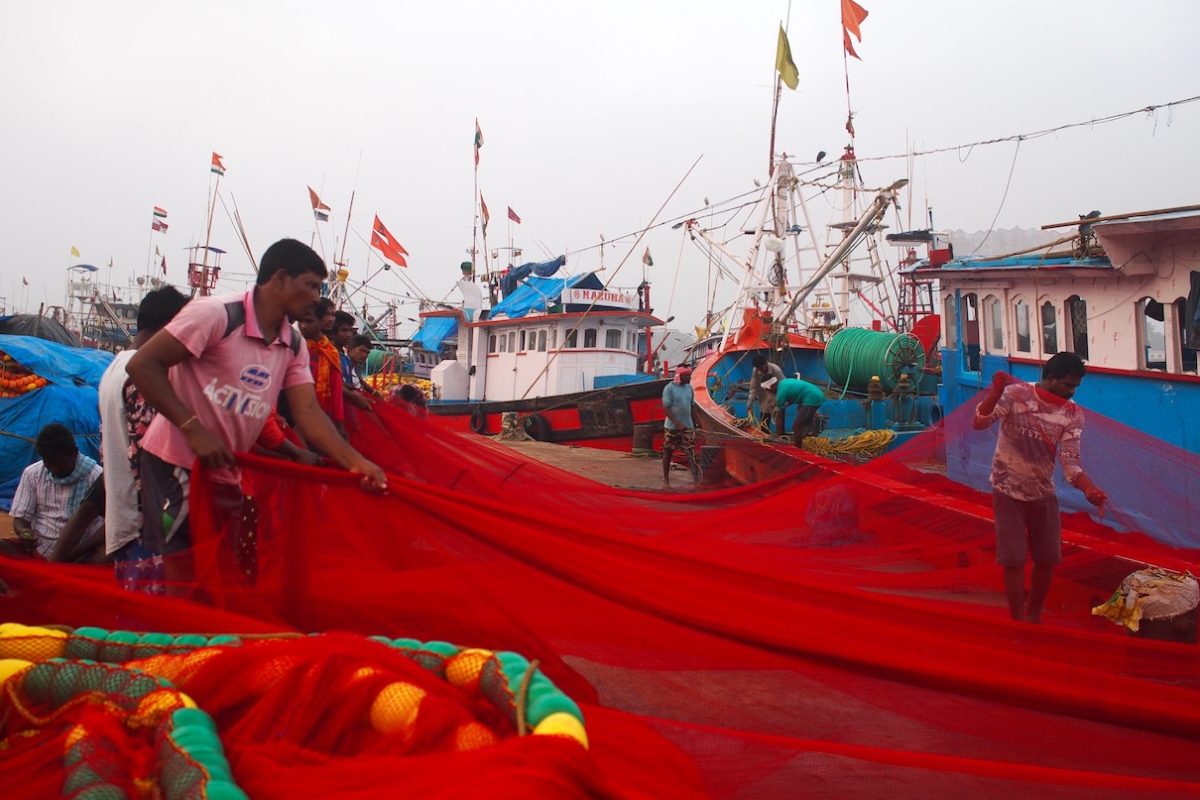 Fishers roll out a red purse-seine net in Mangalore, a major fishing harbour in southwest India. Some of the country’s coastal states are beginning to regulate purse seine fishing boats, especially the size of the net mesh to ensure juvenile fish don’t get caught. Photo by Vaishnavi Chandrashekhar.

Still, much more needs to be done. Not all coastal states are proactively regulating, including Gujarat, the largest fish producer. And state regulations only cover the sea up to 12 nautical miles (22 kilometers) from shore. The area beyond that, up to 200 nautical miles (370 kilometers), falls under federal rules — of which there are few. Yet this is the area plied by large mechanised vessels, producing most of the country’s fish catch.

“It’s a black hole, with limited knowledge of what rules apply where and who monitors and manages what,” said K.V. Akhilesh, a CFRI scientist in Mumbai.

Near-shore restrictions have previously been driven by traditional fishing communities, which are also voting blocs, trying to protect their livelihoods from larger boats. As a result, the rules can be ad hoc and vary from region to region. In the case of Maharashtra state, for instance, protests by traditional communities led to restrictions on purse seine boats that stray into their fishing grounds. These boats are now monitored with satellite tracking.

These are important moves. But the state’s focus on purse seiners has meant the trawlers that haul in the most catch have been let off the hook, said Ganesh Nakhawa, chairman of the Mumbai-based national association of purse seine fishers. “It’s much harder to fight the trawlers,” he said.

He and others say a federal law is needed to create some policy uniformity across the states, to better regulate the offshore waters that constitute India’s exclusive economic zone, and to improve coastal pollution affecting fish nurseries.

Enforcement also needs to improve, said scientist Akhilesh. Only Kerala has instituted a marine enforcement unit to monitor implementation of state fishing regulations, and there is no federal equivalent.

There are signs that the central government is inching toward greater intervention. In 2017, the government put out a marine fisheries policy for the first time, highlighting the challenges of overfishing and climate change. In February this year, the government directed states to end bull trawling and the use of LED lights to attract fish, which traditional fishermen say harms young fish. There are also reports that a federal bill may be up for review by the legislature soon.

A similar bill proposed almost 10 years ago got shelved, say officials, because of conflicts between community, state and federal rights. Management councils of the sort now operational in Kerala could help resolve that, experts say.

Fishing community attitudes are changing too. The change is evident in younger fishermen like Nakhawa, who supports rules dictating mesh size and curtailing juvenile catch, as well as some older ones on the wharf at Mangalore, a major fishing harbour in southwest India. In interviews last October, many of the captains of small trawlers and purse seiners there said they support restrictions on LED light fishing and bull trawling. Many also said they support rules on juvenile catch.

One traditional community has even tried out voluntary catch quotas, hitherto unheard-of in India. Some believe the country will eventually have to adopt a quota system like that of the U.S. or Australia. Quotas are tough to formulate when thousands of vessels and multiple types of gear and species are involved, Mohamed said. India does not yet have the capability to do the expensive scientific surveys of fish stocks that support quota systems, he said, though it may only be a matter of time.

India’s fishing success over the past few decades has largely resulted from natural advantages like fish diversity and productive tropical waters, Mohamed added.

“In spite of poor management and regulation, it has been chugging along with growth rates,” he said. “But that will have to change for continued, sustainable growth.”

[This article was originally published on Mongabay.]