The monsoon rains have arrived late this year in the verdant hills of Kodagu (Coorg) in Karnataka, the coffee capital of India. For some planters, it’s a mixed blessing. A delayed monsoon is bad news in the Western Ghats mountain range, where farmers and planters have found themselves at the receiving end of extreme weather events triggered by climate change. Last year in August, unprecedented rains and floods harmed crops and coffee plantations, affecting many lives and livelihoods.

In recent years, the rains have brought another problem with them — an infestation of giant African land snails that have caused massive losses to some 40-45 plantations spread over 300 acres of land in northern parts of Kodagu.

The foreign pest, which is thought to have arrived in India through trade routes, attacks young coffee plants and devours tender leaves and stems, completely destroying the plants. These giant snails, whose shells can grow up to 20 cm in length, are not picky eaters. They eat over 500 plant species and adapt easily to different ecosystems, researchers have found.

A fast breeder, this snail has emerged as a major problem for planters in the Shanivarasanthe area of Somwarpet taluk (administrative sub-district) in Kodagu. “They multiply in large numbers within a short span of time,” said Pradeep B. Shekar, who owns 40 acres of a coffee plantation.

The giant African land snail, locally known as shanku hoola (conch worm) due to the shape of its shell, appeared in Kodagu for the first time in 2012-13 in 50-60 acres of coffee plantations in Shanivarsanthe. The local plantation owners fought the infestation and thought they have ridden themselves of the pest.

But in 2017, the snails reappeared, wreaking havoc in an expanded area of 300 acres belonging to some 40-45 plantations. The planters say the pest attack costs them an additional expense of between Rs 10,000 and Rs 12,000 per acre, mainly due to the efforts to contain them. This shrinks their profit margins from the produce.

The International Union for Conservation of Nature (IUCN) lists the giant African land snail (Achatina fulica) as one of the worst invasive species in the world. An invasive alien species is “a problematic species introduced outside its natural, past or present distribution,” the IUCN says. “They may lead to changes in the structure and composition of ecosystems, detrimentally affecting ecosystem services, human economy and wellbeing.”

African snails spread to new locations via trade routes, piggybacking on agricultural products, equipment, cargo, and plant or soil matter. While there is no consensus on how they found their way into the pristine landscape of Kodagu, it is certain that these pesky visitors have come with no exit plan.

Achatina fulica is one of the four species of giant snails belonging to the Achatinidae gastropod family native to Africa. It is classified as an obligate-outcrossing hermaphrodite, which means that just one externally fertilised snail can establish a population. These snails reproduce in large numbers.

The snails begin laying eggs at six months of age and can lay around 100 eggs in their first year, and up to 500 in the second year. Their life expectancy is around five years, and one snail can produce up to 1,000 eggs by then. The shell length of these snails ranges from 5 cm to 10 cm, though some adults may exceed 20 cm, and their average weight is about 32 gm. 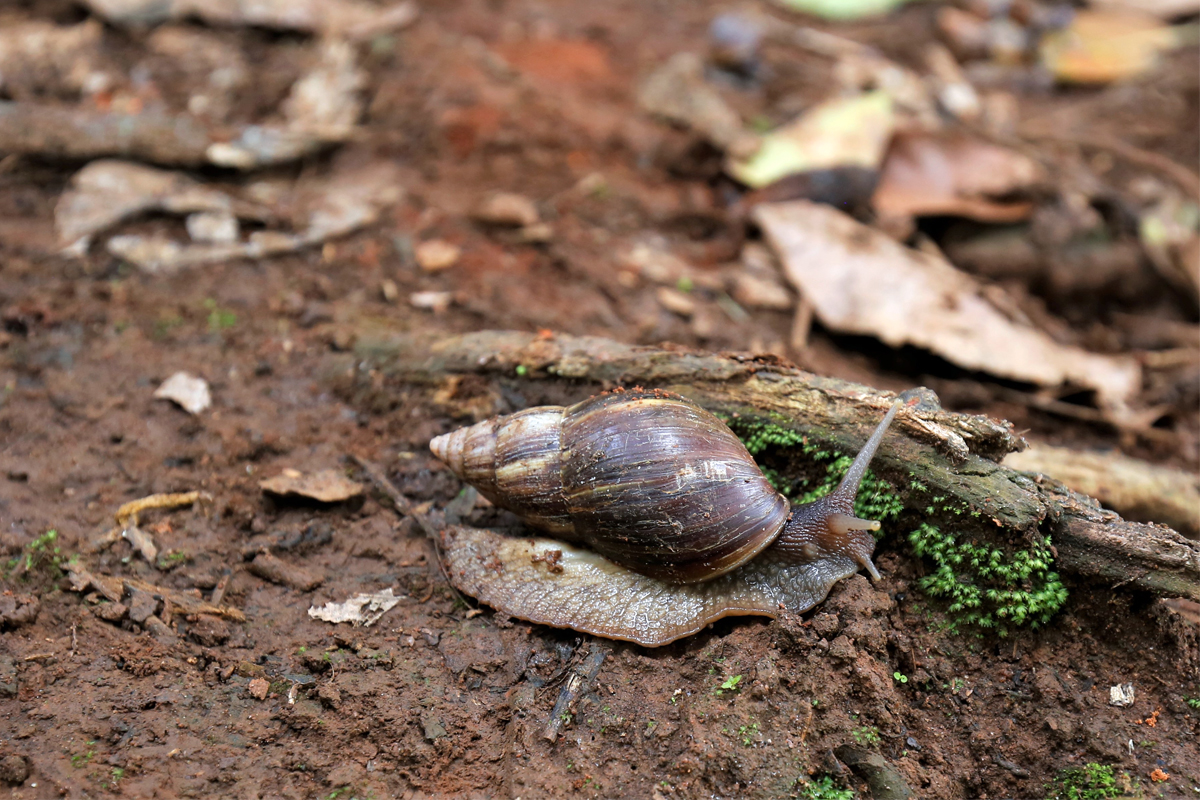 The giant African land snail, native to Africa, made its way to India through trade routes. It is considered to be one of the worst invasive species by the International Union for Conservation of Nature (IUCN). Photo by Abhishek N. Chinnappa.

Despite the destructive potential of the giant shells, the planters in Kodagu have been successful in tackling the infestation. They have reduced the infestation by about 90%, a remarkable achievement given that people in the neighbouring state of Kerala have been fighting this pest unsuccessfully for close to three decades.

The Coffee Board of India has emerged as the unlikely hero in this battle with the African snail. Researchers at the Central Coffee Research Institute in Balehonnur in Chikmagalur district of Karnataka and research sub-station in Chettalli in Kodagu devised a bait for the snail, in a method they dubbed “catch and kill.”

“The bait is made of rice bran, jaggery, castor oil and a chemical, thiodicarb,” explained Vishwanath Hadagalli, junior liaison officer of Coffee Board at Shanivarsanthe. “These are mixed together and balls of it are placed between four coffee plants.”

The researchers experimented with methomyl, a broad-spectrum insecticide, but it has been banned because the cost to the soil is too high. Thiodicarb is considered a less harmful insecticide that is effective against in killing the giant snails. “We tried every method available in the literature to get rid of these pests and this bait was found to be the most effective,” said Manjunath Reddy, assistant entomologist, coffee research sub-station at Chettalli, Kodagu.

In 2015, the Coffee Board used this bait and killed as much as 30 tonnes of snails. Encouraged by this, the Board, with active participation from Karnataka’s Horticulture Department and the Planters Association of Shanivarsanthe, upped their act through regular awareness meetings and distribution of bait kits to all the affected planters. The kit consists of a pair of gloves, 25 kg of rice bran, 100 gm of Larvin branded thiodicarb, 3 kg of jaggery and 100 ml castor oil. It costs Rs. 1,000 but is distributed among the farmers at a subsidised rate of Rs. 100.

“This has to be a collective effort,” said Pradeep Kumar, an affected farmer from Handli village in Shanivarsanthe. “If one affected farmer doesn’t participate, the infestation cannot be contained.” Hadagalli said there’s 90 percent success in eliminating these pests from Kodagu farms. “While we did not maintain records properly for the years 2014, 2015 and 2016, 24 tonnes of dead snails were collected in 2017, which came down to eight tonnes in 2018,” he said. “We expect much lower infestation this year.”

The Coffee Board also came up with the innovative idea of buying back the dead snails. It initially offered Rs. 4 per kg of dead snails, which has since been increased to Rs. 8 per kg. “The dead snails are disposed of in a pit that’s one-and-a-half feet deep. Salt is put over the dead ones to ensure even the last of the caught snails are dead and then buried,” said Hadagalli.

This burial is a precautionary measure against the spread of any disease through the snails. The giant snails are known to serve as intermediate hosts of several parasites that cause diseases in pets, free-ranging vertebrates and humans. They are hosts of rat lungworm (Angiostrongylus cantonensis), which causes Eosinophilic meningitis in human beings.

“In the past 5-6 years, seven children and at least one adult have been reported to have contracted meningitis through contact with giant African land snails,” said T.V. Sajeev, a scientist at Kerala Forest Research Institute (KFRI), which who has been involved in the eradication of these snails in Kerala.

Although the fight against the snails has been largely successful in Kodagu, the experience is Kerala, where these creatures are seen as a nuisance, has been different. There have been as many as 223 outbreak points from 12 districts out of 14 in the southern state.

There is a cogent reason for this, said Sajeev. “The chemical used in the bait is not suitable for areas where there is human activity. These chemicals are found to be harmful, especially to aquatic organisms,” he said. “The case of Kerala, where the infestation is in towns and villages, is very different from that of an estate.”

Sajeev said one of the main problems that an invasive species brings with it is the invitation to use strong chemicals to eliminate them. Research has shown that exposure to chemicals like thiodicarb can be detrimental to human and animal health. The KFRI has been spraying an organic decoction of tobacco mixed with copper sulphate on snails that are lured with crushed papaya and cabbage leaves as bait.

Another big challenge in Kerala, said Sajeev, is the difficulty in organising people in these areas to work in tandem. “In Kerala, more than the destruction of agricultural crops, snails are a nuisance because they are seen in and around houses,” he said, adding that it is nearly impossible to get all the people in these houses to work together against the snails.