Conservation is serious business at this private nature reserve in Uttarakhand

Every year, Mansi Sharma and her sister Surabhi take at least two trips to Landour (next to Mussoorie) where, for a few days, they just spend their time wandering in the woods and hiking. Three years ago they discovered the Jabarkhet Nature Reserve (JNR) – a 100-acre private forest area just outside Landour – and since then it has been a regular stop on every trip. So, when Surabhi was getting married earlier this month, Mansi didn’t have to think twice before zeroing on the gift for the younger sister. On the eve of her sister’s marriage on February 14, 2020, Mansi took her to the balcony of their house and handed her a year-long membership to the JNR.

“We have been going to Landour for the last eight years. We keep coming back to Jabarkhet because we feel a sense of solitude and overwhelming peace in the reserve. From seeing the forest floor flash red with dried rhododendrons to the mossy damp smell of mushrooms blooming in the monsoons, we love all the sights and smells the forest has to offer. My sister was speechless for a couple of minutes when I gave her the card,” Gurugram-based documentary filmmaker Mansi Sharma told Mongabay-India.

The 100-acre private reserve is just a few kilometres outside Landour, which is adjacent to the famous hill station of Mussoorie, and also home to celebrated author Ruskin Bond. Both Landour and Mussoorie are highly-visited tourist places and every summer thousands of people from northern India visit these two towns to escape the heat.

With numerous boarding schools in the area and increasing tourists, there is pressure on the resources of these two places and kilometres-long traffic jams are a common sight every summer. In 2019, a severe water crisis had gripped the region as well.

Environment conservation is not a charity

The Reserve is owned by Vipul Jain, a tech entrepreneur currently based in Mumbai, who was born in Mussoorie and grew up there. Jain explained to Mongabay-India that the Reserve is very special to him as his father, who died in 2006, spent his entire life nurturing the area.

“Jabarkhet Estate has been with the family for over 90 years and was one of the first privately managed forest estates in the entire region that had all its working plans approved by the forest department. My father loved spending his time here and personally took care of the estate. He planted a lot of trees on the estate and in fact the biodiversity of the nature reserve is due to his efforts. I am blessed to have done well financially in my business, so I just wanted to protect his legacy for future generations. It was a chance meeting with Sejal Worah that led to the birth of Jabarkhet Nature Reserve,” Jain told Mongabay-India.

Sejal Worah, a conservationist and programme director with WWF India, grew up in Mussoorie but presently shuttles between Delhi and Mussoorie. She was introduced to Jain after her sister, who was Jain’s classmate, met him during one of the reunions of Woodstock School. At that time, Jain was looking at options for managing the reserve.

“Sejal came up with the idea of the reserve. Our concept was that it should be a model for ecotourism and conservation and should also be able to generate resources for upkeep and maintenance. That is why Jabarkhet Nature Reserve was started as a company and not a charity because I strongly believe that the project should create a value that people are willing to pay for. I am happy that within five years of its operation we have broken even and the project is self-sustaining. The forest and wildlife are flourishing, visitors love the experience and we have generated livelihoods for the local community. In this way, we have achieved what we had set out for,” said Jain.

Jain, after studying in Mussoorie did his engineering from the Indian Institute of Technology, Kanpur, and then a management course from the Indian Institute of Management, Ahmedabad. He co-founded a software company in 1986 and recently sold his stake to a European firm. His extended family owned around 1,000 acres in the area and of that he, along with his sister, owns about 350 acres.

Of those 350 acres, JNR  is spread across a 100 acres plot that is contiguous to the government’s forest area. “The idea was to amplify the protection of forests and create a safe space for wildlife,” said Jain. The remaining 250 acres is neighbouring the JNR but Jain explained that already there are roads and people living nearby and that is why the Reserve was not extended to the entire estate.

Jabarkhet has become a safe space for wildlife

In the past five years, according to their estimates, about 10,000 people have visited the JNR. A guided visit to the reserve costs Rs. 500. The reserve has several hiking trails but has no room or permanent structure. People are not allowed to camp or stay overnight. It has a waterfall, a spring and three managed water holes that are regularly visited by animals.

“A lot of people come after hearing about the reserve from their friends and there are many who are repeat visitors. We don’t advertise. One of the most encouraging parts is that the reserve is home to a lot of wildlife. Many of the animals, who visit the area, were not seen by locals for years. We have put cameras across the reserve and recently we found out that bears were coming to the reserve. When I told this to a local conservationist he didn’t believe me and it was only after I showed the pictures that he believed,” Worah, who manages the reserve, told Mongabay-India.

The park is home to hundreds of species of plants and animals like bears and leopards etc. 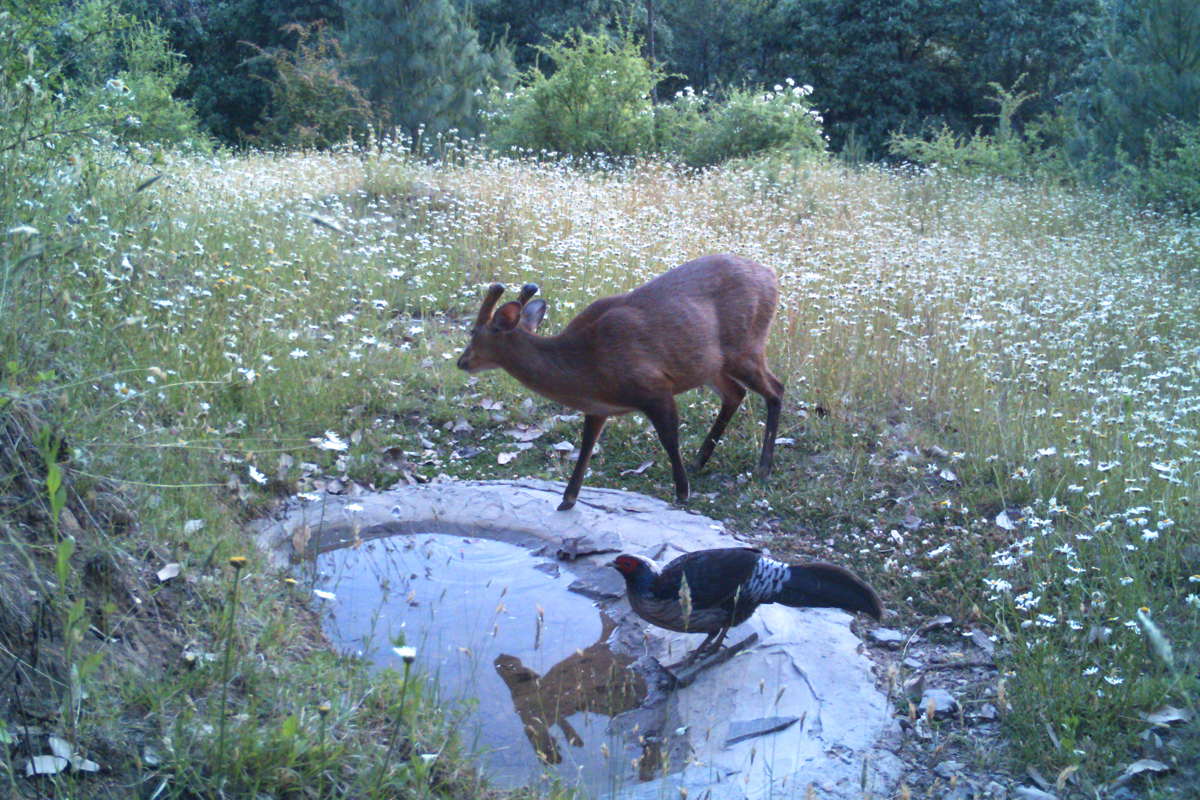 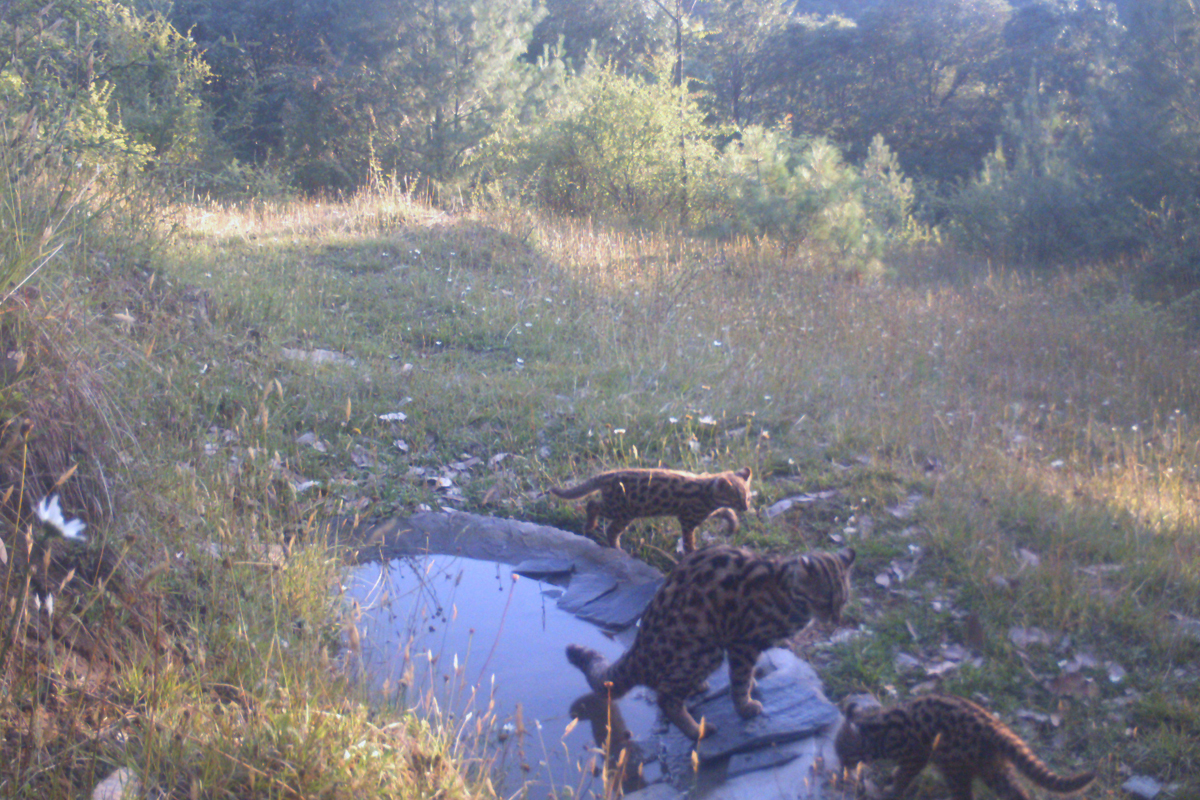 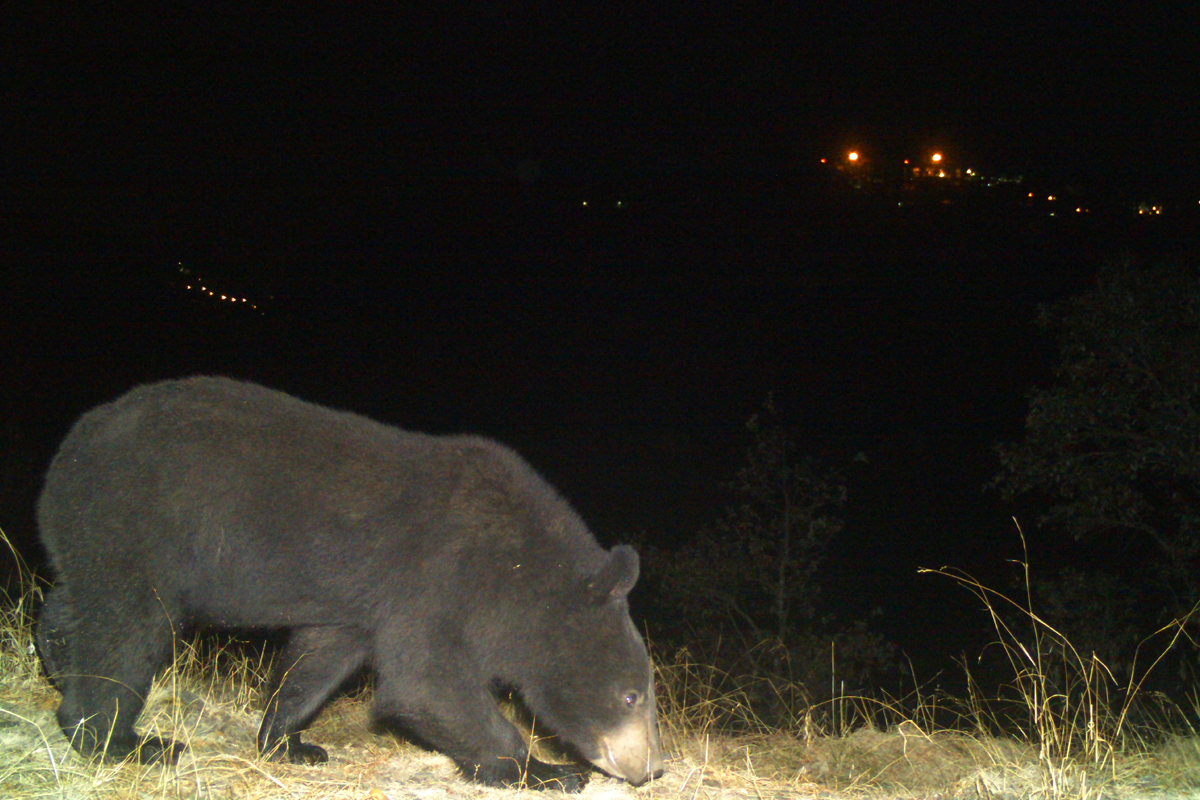 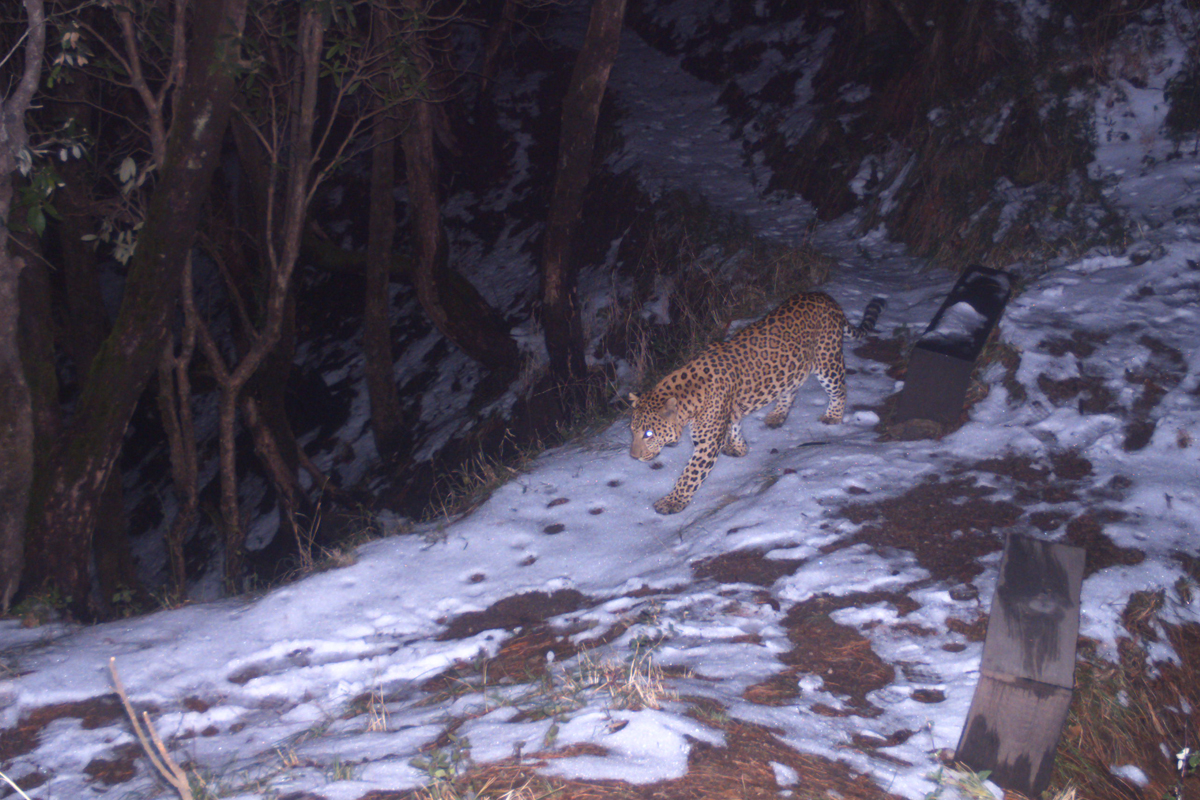 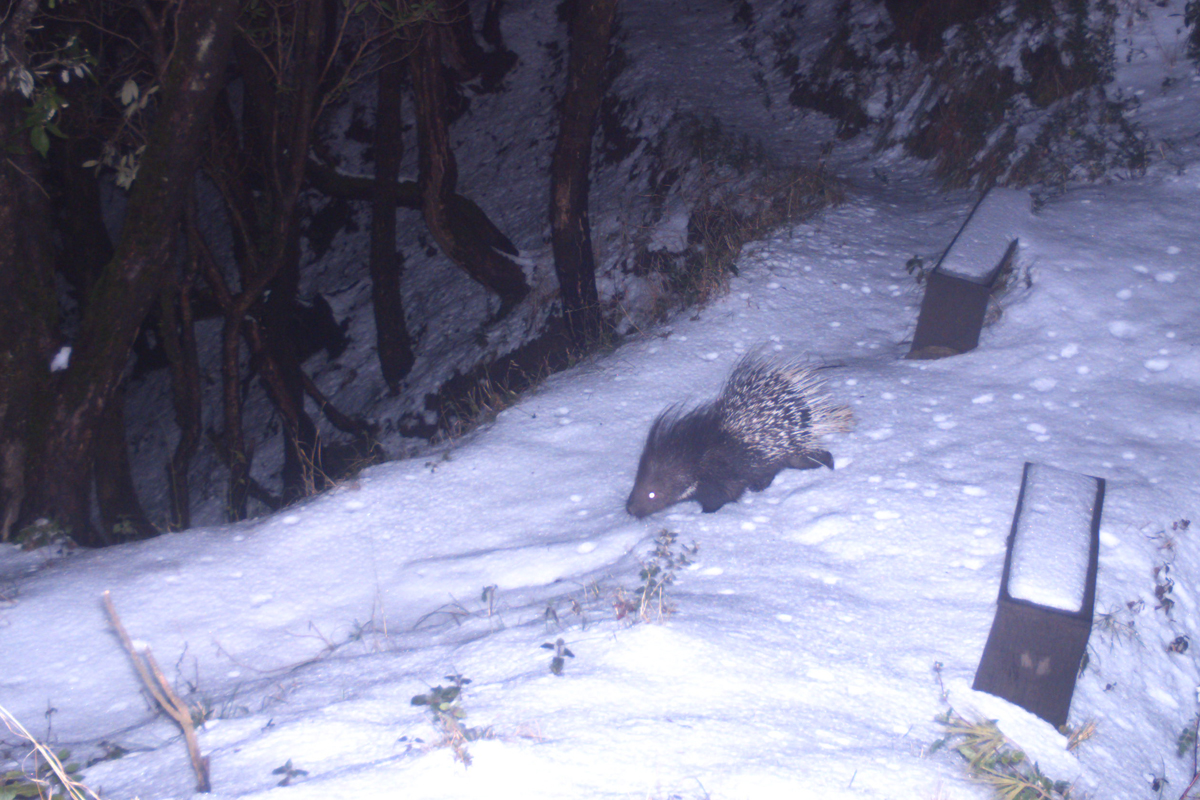 Artificial water holes at the private reserve are hand-filled regularly for wild animals. All images from Jabarkhet Private Reserve.

“We started discovering species coming here which are never expected to be found at this altitude. For instance, we have recorded the jungle cat here which is not usually found at this height of 8,000 feet. We have found hares. We have found sambars, which is exciting because in hills they are often hunted out but we have been getting them regularly in this area,” said Worah.

Talking about diversity, Worah further said what amazed her most was the diversity of mushroom and fungi. “We have documented over 100 species of mushrooms. Normally people don’t like to come during the monsoons seasons but because of mushrooms, it has become a favourite season for the people who come here to identify and photograph mushrooms. We have also found over 60 species of ferns and over 350 species of flowering plants. We have got 150 bird species. As far as wildlife and mammals are concerned we have nearly everything here that is found in the middle Himalayas,” Worah said.

She stressed that despite having wildlife they have not had any human-wildlife conflict.

“One of the reasons behind that is a good prey base and animals don’t need to go out. It is probably like a canteen for predators like leopards. This place has become a whole ecosystem of wildlife,” said Worah while adding that she has had visitors from other parts of the country who have got inspired and want to replicate this.

Worah explained that to keep it as true to nature as possible they fill the three water holes by hand. “Once we saw that the water holes were getting empty every day and then it was only after we saw the footage we discovered that a bear family was enjoying those water holes as their bathtubs. This means that animals consider this place a safe space where they know they won’t be poached or disturbed,” she chuckled.

She emphasised that within five years they have broken even and it proves that “conservation is a viable business model.” “A lot of people have taken the JNR’s annual, five-yearly and lifetime memberships. Several hotels and educational institutions have also taken our institutional memberships,” she said. 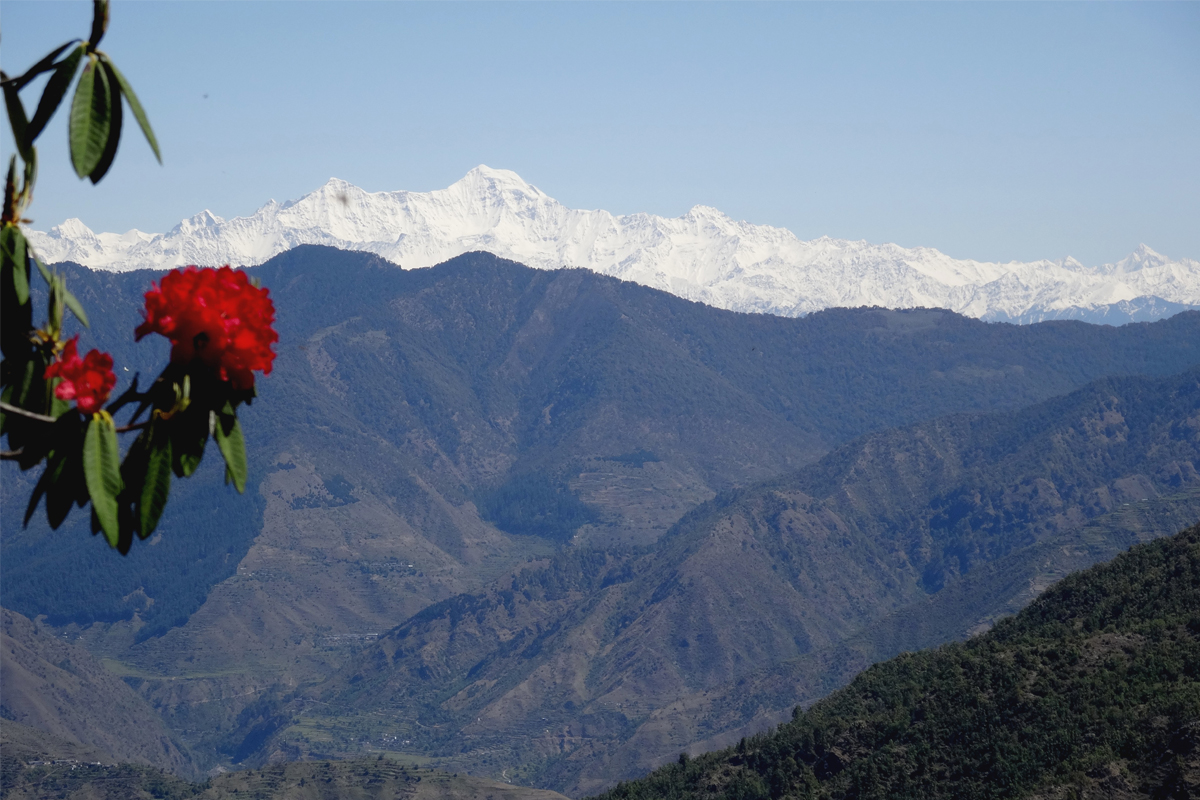 Read more: A tiger on my land

The evolving story of India’s forests

Worah explained that their idea was to involve the local community because they knew without them the reserve can never become successful. Over the past few years, she has got women and youth from the village next to the reserve and from other nearby villages to engage with activities in the reserve.

“We have involved the locals in every aspect from daily work to overall management. We have trained local youth over the years and one of them has become one of the top birders of the region and also guides the visitors. Our day-long programmes involve hiking to nearby villages where the tourists experience local foods and culture. This ensures that everyone earns a livelihood and they protect the reserve,” Worah explained.

“I had just completed my schooling and had visited Dehradun when I discovered that I can’t live a city life. I had read a lot about pollution in cities like Delhi. But more than any other factor, I love nature and wildlife and thus wanted to do something related to that. I met Sejal who encouraged me to take up this work. It has been a fabulous experience so far. My idea is that children should be taught about environment conservation when they are young because they are going to run the country tomorrow. If they know properly how important the protection of the environment is then we need not worry. Idea is to tell people that protection of the environment doesn’t mean anti-development,” Panwar told Mongabay-India.

Over the years, Panwar has done several birding courses and even got an award. “The adults who visit are fascinated by the whole experiment while children feel inspired. I just want to do that,” said Panwar, who has already inspired several youngsters from his local village to follow his path.

“For me, it is a labour of love and is in memory of my father. I feel my dad is watching me from somewhere and he is really happy,” said Jain.