A lesser flameback woodpecker drums a tree trunk while a pair of brown-headed barbets collect berries for their nest, a shikra swoops down on a gecko and then feasts on it, a group of sweat bees returns with pollen to their underground nests and a squadron of spot-billed pelicans take off to the skies. This collection of sightings wasn’t recorded from a remote landscape or the wilderness. They are usual occurrences amidst residential areas of India’s megacities.

Natural history experts and enthusiasts witnessed these sights from their windows, balconies and terraces in different cities of India as the COVID-19 pandemic forced them to stay indoors. On March 24, the Indian government declared a 21-day lockdown and urged citizens to stay at home to avoid the spread of the disease.

While some peek into their backyard during the national lockdown to feel at ease, others do it out of curiosity, to contribute to science or just to pass time. Overall, the observations provide a glimpse of India’s urban biodiversity.

Aman Sharma, a 16-year-old from Vasant Vihar in New Delhi, was surprised by the bird diversity he found close to home. After a chance visit to his terrace recently, he saw two brown-headed barbets nesting on a tree. “Then I decided to be regular during the lockdown,” he said. “I saw a yellow-footed green pigeon, rose-ringed parakeets, purple sunbirds, the lesser flameback woodpecker and a pair of ashy drongos on the same tree!”

Sharma, a vocal youth climate activist, views the presence of multiple bird species as an illustration of the value of a single tree. “One tree in itself is an entire ecosystem. It can survive in urban conditions given that citizens respect its space,” he added. 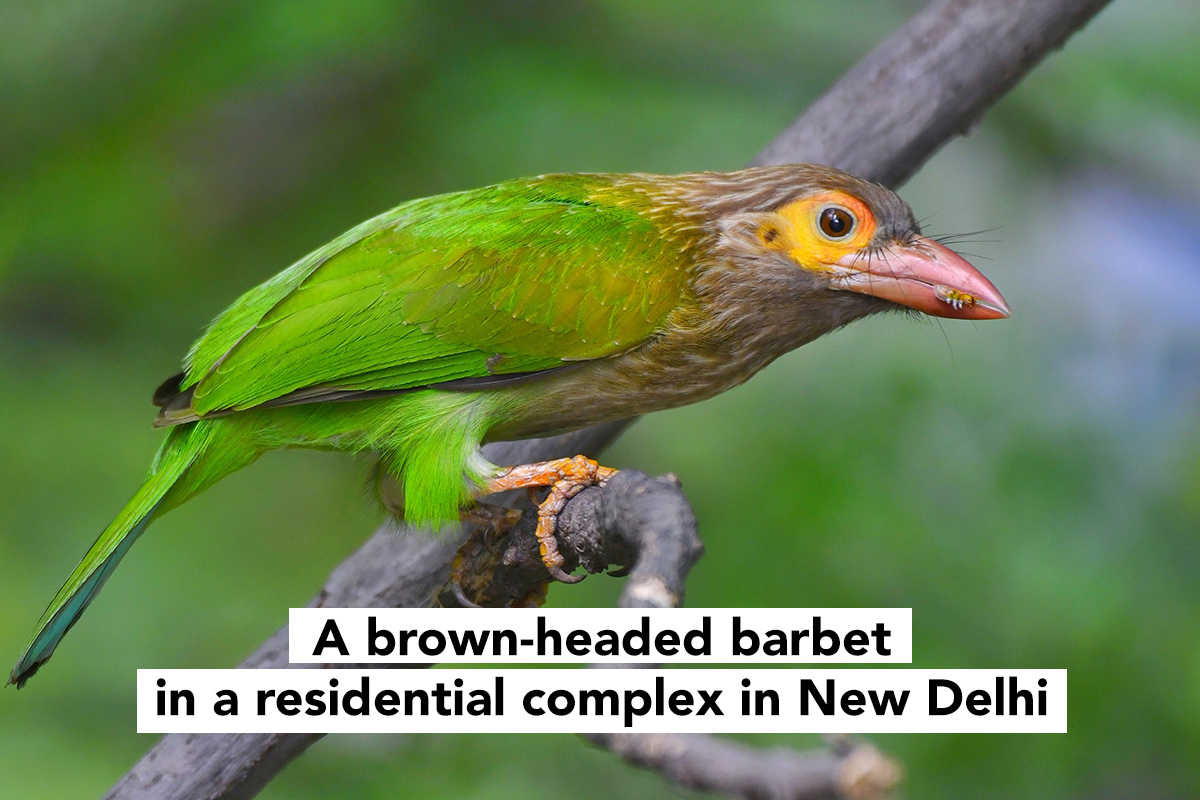 In Chennai, M. Yuvan, a nature educator and writer, has been using the peace in his otherwise noisy neighbourhood near a railway station to make careful observations of non-human life forms. These observations are made at Yuvan’s balcony that overlooks a fallow land where he has spotted around 40 species of birds over three years. Out of over 1300 bird species found in India, over 300 are found in the Chennai Metropolitan Region itself.

During the first ten days of staying indoors, Yuvan observed the shikra stealing twigs from a crow’s nest, the pied wagtail’s singing, and a barn owl – a bird that he had never seen in his locality.

But for the seasoned naturalist, the buzz inside his balcony was the most captivating. “I have sweat bees nesting in the soil of the tulsi plant’s pot. I have been seeing them for many years but never knew they nest on the ground and have multiple entrances to it,” he said.

Yuvan adds his observations from the natural world to citizen science platforms such as eBird and iNaturalist that depend on public contribution of data for scientific research.

For instance, the State of India’s Bird 2020 report powered by citizen science data found the population of house sparrows declining in Indian cities but roughly stable across the country.

Suhel Quader, scientist and educator, said that despite urbanisation and other environmental issues, cities hold rich bird-life and data gathered from platforms such as eBird are key to know more about our winged cohabitants. “We don’t tend to notice or appreciate our city birds,” he said, referring to bird-life found outside special or protected urban habitats. “Uploading information about urban birds to platforms is also a reminder of what we have around us. And if enough people share data, someday researchers will see relationships between habitats such as parks, city fringes, commercial centers, and the distribution of birds and so on.”

Bird Count India, a platform working to increase knowledge of bird distribution and population, started the Lockdown Birding Challenge on March 27. The challenge requires people to observe their backyards for just 15 minutes, twice daily, at particular time slots till the lockdown ends. eBird checklists made with these protocols help make the data collection consistent and comparable and, at the same time, not too intensive, explained Quader, who is part of Bird Count India.

The challenge also coincides with the breeding season of many resident birds. Observations such as a nest with chicks or a bird flying with nesting material could build datasets to study breeding seasonality in the future.

“Around 2000 to 3000 observers in India upload 4,00,000 to 6,00,000 observations per month on eBird. And now those people are stuck at home. Even from here, they can contribute valuable insights,” he said. “But more than the data, the opportunity to engage with nature is higher and it is of great value to our mental well-being in this stressful time.”

As a casual in-house experiment during the March 22 janta curfew declared by the government to combat the spread of coronavirus, Quader, along with his 12-year-old daughter, measured the levels of ambient noise versus the bird calls on the day of the curfew and the previous day. While Quader collected the data from his house in Bengaluru, his daughter plotted the graph. “We saw a drop in the noise and increase in levels of bird calls,” he said. “Lesser noise made our ability to hear the birds with clarity. It does not necessarily mean that the number of birds have increased. But this lockdown could lead to new observations, changes in bird behaviour, etc.”

In another project, and engaging audiences online, Aman Sharma started the ‘Terrace Series’ with photographs of birds in his backyard while Yuvan focussed indoors to shed light on homes within his home. While on this house hunt, he found homes of social paper wasps, pharaoh ants, signature spiders and many others.

“This helps me cope with the lockdown completely,” said Sharma while photographing the birds from his terrace.

Christy Bharath in Siruseri near Chennai gives us a wide view of the backwaters of the Muttukadu lake and the birds busy in it. In the past few days, he noted spot-billed pelicans, painted storks, black-winged stilts among others in this habitat surrounded by residential areas and a large IT park.

The sight of a vividly coloured bird, the Indian roller, in Chennai and the following realisation that it is common for his city, hooked him onto birdwatching. A few years later, he moved into his current house for its proximity to birding landscapes. Now, the marketing consultant and writer is delighted when people view his pictures and write to him excited about Chennai’s birds. “I thought of putting some stuff online unrelated to the virus as well. So, I put things related to birds to try and give people a good time.” 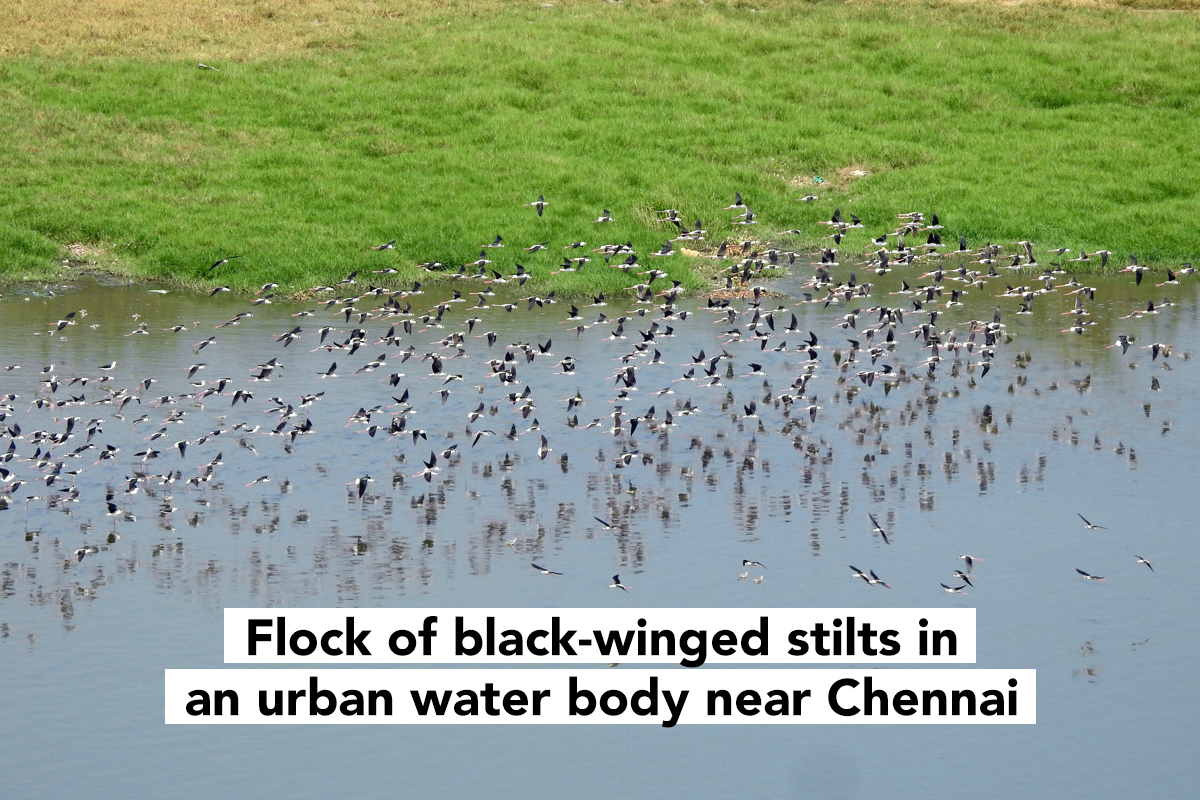 Muskan Fakir, a novice birdwatcher and undergraduate, residing in crowded north Mumbai, is restless at home but is happy with her new routine. The presence of vegetation around her compound provides shelter to some common bird species. Since being restricted to the house, she arrives at the window with binoculars and phone-camera every day at 8 AM to document the nesting purple rumped sunbirds. Then again, at noon, it’s time for a pair of tailor birds to arrive, she observes.

Another Mumbai resident, Rafikh Shaikh, a senior research associate at Tata Institute of Social Sciences, is also travelling the great indoors. Using a Foldscope, a DIY paper microscope, Shaikh is getting a microscopic view of his roommates. “It’s fascinating to look at everyday insects like mosquitoes, moths and butterflies closely. A view of their compound eyes can fascinate you and want you to know more about their evolution,” he exclaimed. With some additional time in hand, he’s going through his insect collection, documenting them and sharing them on Foldscope’s online forum.

The science educator believes there’s a disconnect between what we study in science textbooks and the surroundings and the best way to create an overlap is to study and interact with our immediate surroundings.

Shaikh also has his curious eyes on trees like the cannonball tree and copper pod trees, visible from his balcony. He regularly updates the observations on SeasonWatch, a citizen science initiative that collects data about leafing, flowering and fruiting in common trees. In the long run, this data could help researchers understand the seasonal phases of trees and links with environmental factors such as rainfall.

Geetha Ramaswami, project head of SeasonWatch, explained, “You might think they are just standing there and they are boring. But it’s phenomenal how trees change rapidly.” Their Spring Festival encouraged people to look at the changes trees undergo from 15 February to 31 March. “The leaves shed, then there are new buds, flowers emerge, then fruits, a huge cacophony of pollinators surround them. It’s an exciting time in the life of trees. And all this is happening on your streets on trees like gulmohar or palash.” The event gathered around 7,100 observations in 46 days, including part of the lockdown period.

Back to Yuvan’s balcony in Chennai, he said that the tulsi plant is teeming with insect activity, but he never looked at it earlier peacefully. “If we look close enough, there is life thriving in the most unlikely places,” the naturalist said. “I speak about that a lot, but now I am rediscovering it in greater magnitude.” 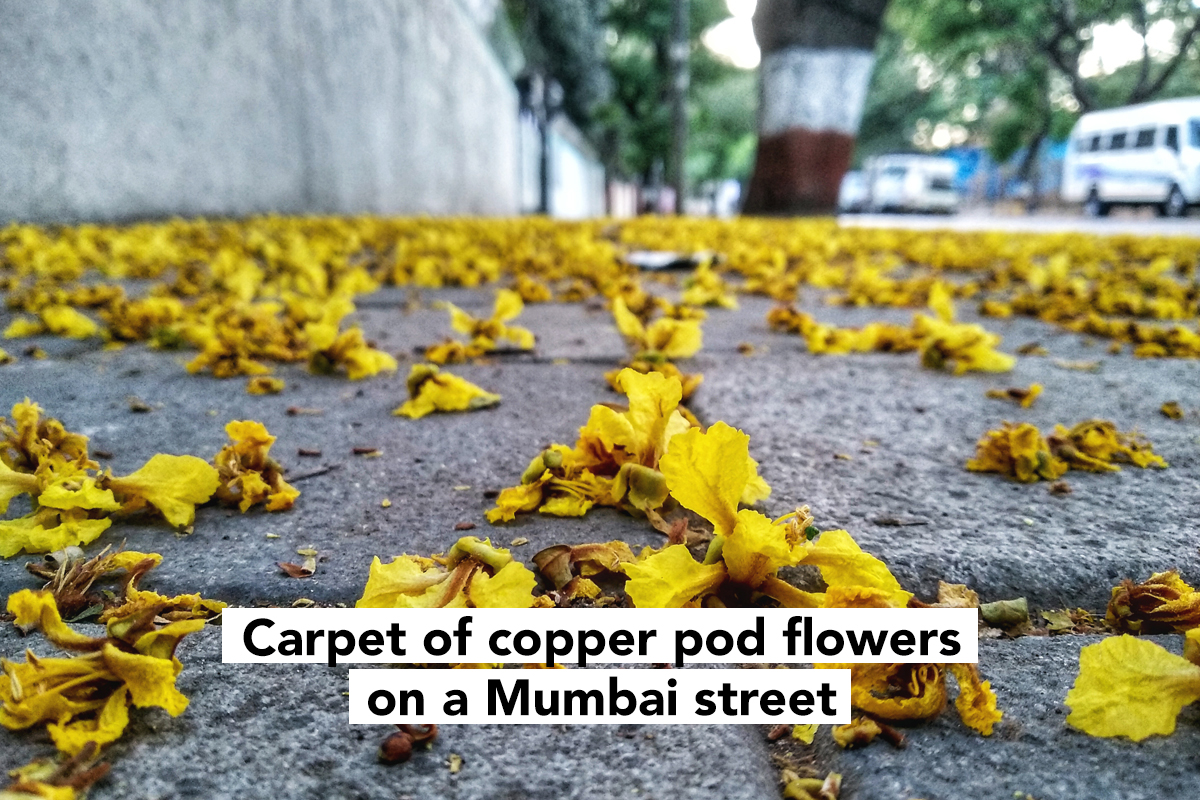